Accessibility links
Nurse Nina Pham To Be Transferred To NIH For Ebola Treatment : The Two-Way The first of two nurses who became infected after treating an Ebola patient at a Dallas hospital will be moved to a "high-level containment" facility at the National Institutes of Health in Maryland.

Nurse Nina Pham To Be Transferred To NIH For Ebola Treatment

Nurse Nina Pham To Be Transferred To NIH For Ebola Treatment 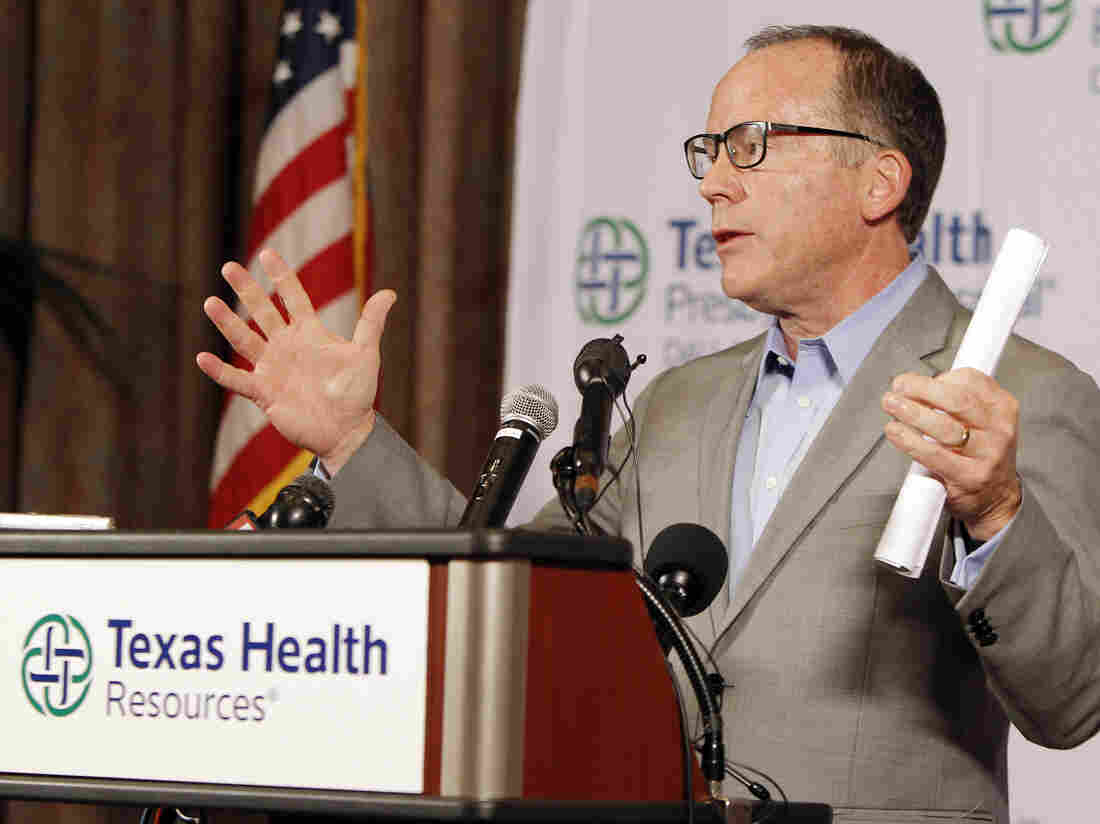 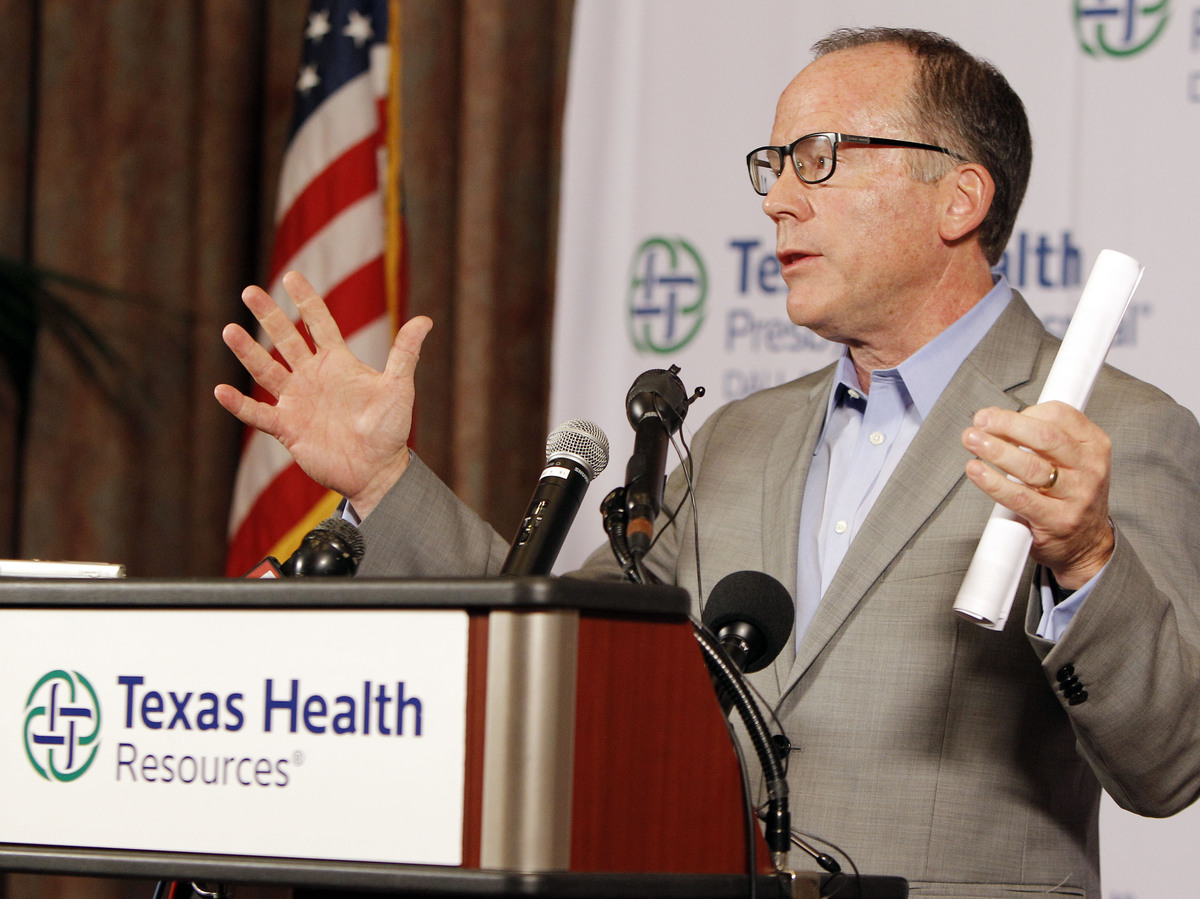 Nina Pham, the 26-year-old nurse who became infected with Ebola after treating a patient with the disease at a Dallas hospital, will be transferred to a high-level containment facility at the National Institutes of Health in Bethesda, Md.

Dr. Anthony Fauci, the director of the National Institute of Allergy and Infectious Diseases, said in testimony before a House committee that Pham will be admitted to the NIH tonight.

There she will will be given "state of the art care" in a high-level containment facility, he says.

Texas Health Presbyterian Hospital Dallas, where Pham is being treated and also where she contracted the disease, said transferring Pham was the "right decision."

"With many of the medical professionals who would normally staff the intensive care unit sidelined for continuous monitoring, it is in the best interest of the hospital employees, nurses, physicians and the community to give the hospital an opportunity to prepare for whatever comes next," the hospital said in a statement.

Dr. Daniel Varga, a top official from Texas Health Presbyterian Hospital, where Duncan was treated by both Pham and Vinson, acknowledged the facility's mishandling of the original diagnosis and subsequent handling of the situation.

"We made mistakes," Varga said in a video link with lawmakers.

Testimony from Texas Health Resources Regarding Ebola Response by KERANews

Varga's testimony comes as President Obama, for a second day, canceled out-of-town trips to stay in Washington, D.C., and monitor the response to the outbreak. The president had planned to travel to Rhode Island and New York today.

By late afternoon, Obama announced he was meeting with his cabinet again and issued an order giving the Pentagon the power to call up reserve National guard troops if they were needed to help fight the outbreak in West Africa.

NPR's Scott Horsley said this did not indicate a mass mobilization, but was instead the authority to "call up people with very specific skills-- e.g. engineering, communications and Chaplains."

Duncan first sought treatment at the hospital on Sept. 26 but was sent home with antibiotics despite a high fever and having told a nurse of his recent travel to Liberia, an Ebola hot spot. Two days later, he returned to the hospital, was placed in isolation and subsequently diagnosed with Ebola. That's when officials believe Pham and Vinson, 29, became infected.

In his testimony, Varga acknowledges that the hospital did not correctly diagnose the disease on Duncan's first visit. "We are deeply sorry," he says.

After treating Duncan but before she exhibited symptoms, Vinson traveled by commercial airliner to and from Cleveland. That has raised questions about why she was allowed to travel with the public and whether anyone in an official capacity cleared her to do so. Her reported temperature was below the threshold set by the agency, and she had no symptoms, according to Centers for Disease Control and Prevention spokesman David Daigle, who talked to The Associated Press. The CDC has said that the likelihood of her passing the virus to a fellow passenger is considered very low.

By Thursday afternoon, however, CDC officials in Ohio began to make contact with passengers on Frontier flight 1142, which Vinson took from Dallas-to-Cleveland.

According to NPR member station WKSU, Dr. Chris Braeden, the head of the CDC team in Ohio, said the widening investigation had to do with the CDC's evolving definition of symptoms.

In an interview with CNN, Dr. Marguerite Erme, the medical director for Summit County Public Health, explained that through interviews, the CDC found out that Vinson may not have been feeling well days before she tested positive for Ebola.

Vinson, Erme said, is believed to have presented with "non-specific symptoms" earlier than first thought, so the people on her flight to Cleveland and those who may have been in a bridal shop while she was there are now considered "contacts."

In a statement issued early Thursday from Texas Health Presbyterian, the hospital responded to allegations by National Nurses United that protocols and equipment were not up to the task of treating Duncan. The hospital says it followed CDC guidelines at the time.

Texas Health Presbyterian also said it would offer a special room "to any of our impacted employees who would like to stay here to avoid even the remote possibility of any potential exposure to family, friends and the broader public," according to a statement late Wednesday, adding, "We are doing this for our employees' peace of mind and comfort. This is not a medical recommendation."

Dr. Thomas Frieden, the director of the CDC, is also expected to testify before the House subcommittee. In prepared remarks, he calls the current epidemic "the biggest and most complex Ebola challenge the world has ever faced."

Frieden confirmed that after Vinson cared for Duncan and while she was being monitored for symptoms, she called the CDC and asked for guidance on whether she should take a flight from Dallas and Cleveland.

"I have not seen the transcript of the conversation. My understanding is that she reported no symptoms to us," he said.

Obama has made ramping up efforts to respond to Ebola a priority and wants to make sure what happened in Dallas doesn't happen elsewhere across the country. He said efforts are being taken very seriously at the highest levels of the government.

"As soon as somebody is diagnosed with Ebola, we want a rapid response team, a SWAT team, essentially, from the CDC to be on the ground as quickly as possible — hopefully within 24 hours — so that they are taking the local hospital step by step through exactly what needs to be done and making sure that all the protocols are properly observed; that the use of protective equipment is done effectively; that disposal of that protective equipment is done properly," Obama said after Wednesday's Cabinet meeting.