Accessibility links
Washington, D.C., Pitches New Bridge Park As A 'Model For Social Equity' : The Two-Way The park, built on piers left over from an obsolete, demolished bridge, would connect two disparate parts of the city in hopes of sparking new life and knitting two communities. 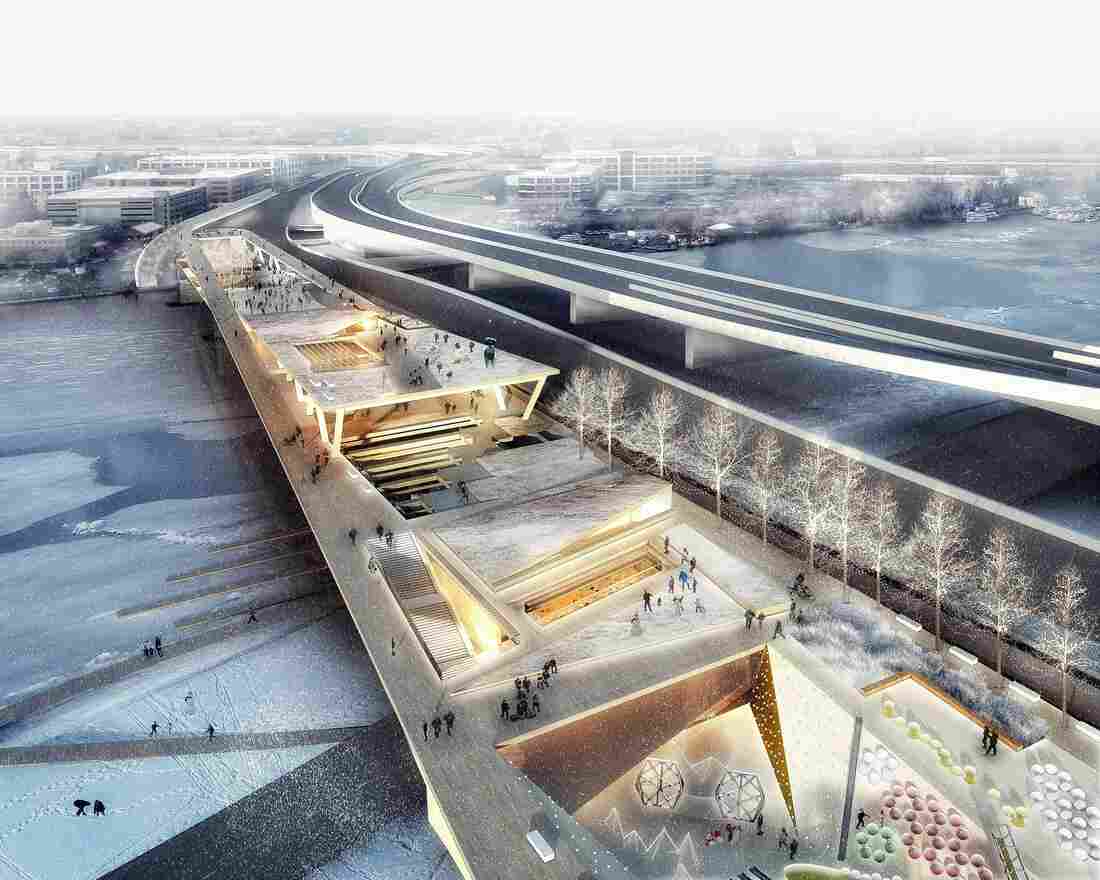 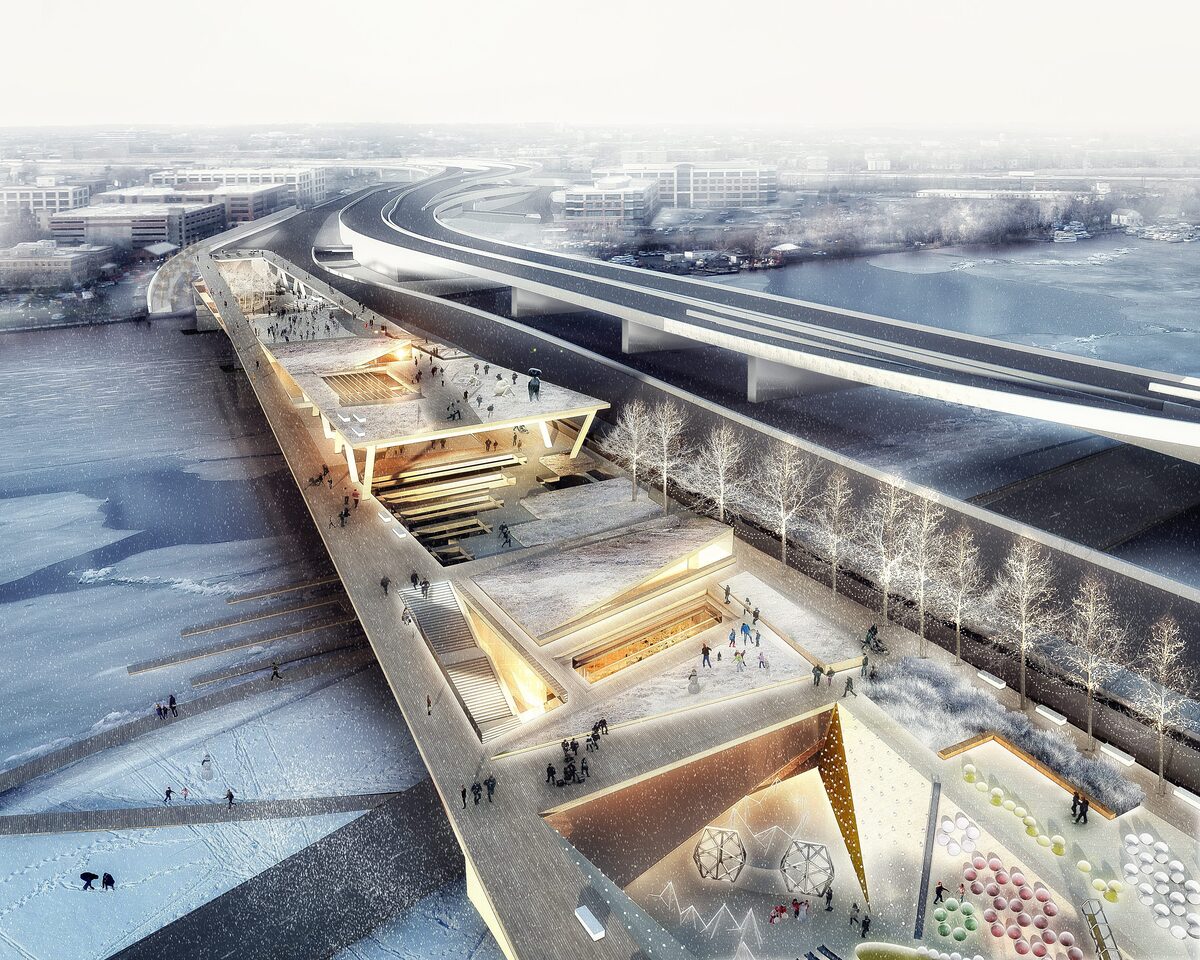 A rendering for the planned 11th Street Bridge Park in Washington, D.C.

Washington, D.C., moved a big step closer this week toward building its own "bridge to the future." Two well-known design firms — OMA and OLIN — were selected as the winners of a competition to conceptualize the 11th Street Bridge Park.

The plan is an inventive reuse of old infrastructure that could help to revitalize a long-underserved part of the city. The old crumbling 11th Street Bridge used to carry the I-295 freeway over Anacostia River. It has since been replaced, and the deck of the old bridge has been demolished, leaving only the piers standing in the middle of the water. The city wants to top those old piers with a brand new park and a new bridge intended to support foot traffic and spark new life along the Anacostia.

The proposed new space would not only be a marquee feature in the increasingly vibrant and economically booming nation's capital, but, as OLIN partner Hallie Boyce puts it, the proposed new cantilever bridge would "knit together two distinct communities to make it really a world class city and act as a model for social equity."

As the NPR Cities Project reported back when the idea for the new park was first formed, on one side of the river are the Navy Yard and Capitol Hill neighborhoods, areas where there are obvious signs of robust economic life. On the other side is Anacostia, where there's much more poverty, and where any economic resurgence is very much its infancy. There's also an underutilized National Park on the Anacostia side. 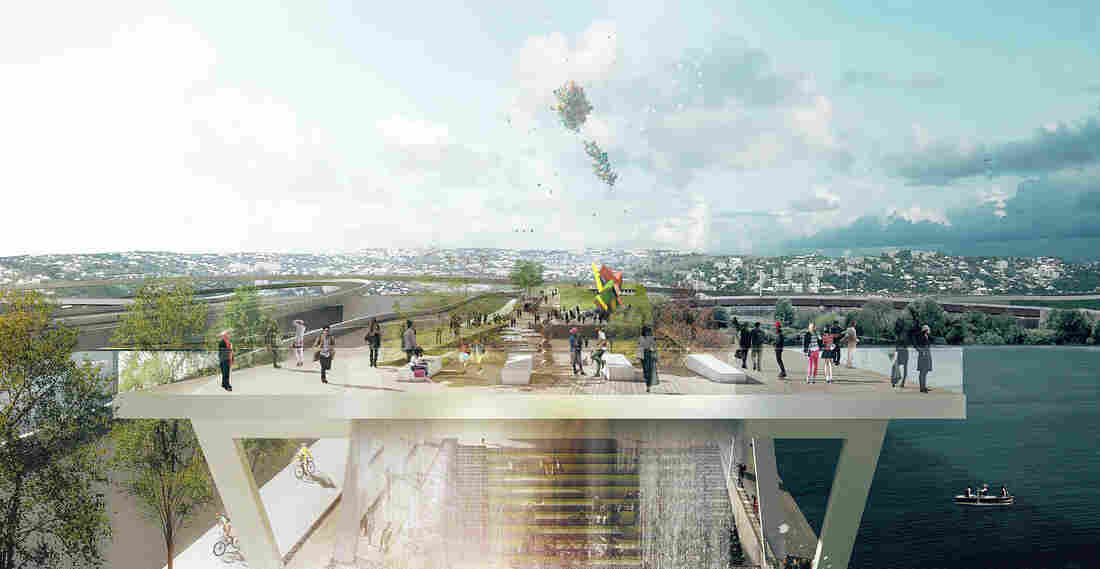 Features include a café, boat and kayak launches, a picnic area, and "urban boardwalks" to draw people in from the Anacostia side.

The city and the nonprofit organization that are partnering to bring the park to reality have created a task force to help navigate the difficult issues sometimes created in gentrifying areas of a city.

In this case, Scott Kratz, director of the 11th Street Bridge Park, tells NPR there will be a list of policy recommendations, including some on affordable housing, about which some people have expressed concern.

"We are working hard to ensure the 11th Street Bridge Park continues to be an inclusive project, as it has been from the very beginning," he says. "If successful, [the park] can become an example of how the public and private sectors can invest in and create world-class public spaces in an equitable manner."

As for the design, OMA partner Jason Long says key design elements on the bridge itself include a main plaza in the middle of the bridge that provides a flexible gathering space, and an overlook providing amazing views of the river and the surrounding area. "That really lets you locate yourself within the city," he says.

Hallie Boyce points out plans for two waterfalls falling off the new structure, tumbling into the river and helping to aerate the polluted Anacostia. Floating wetlands will be placed around the piers, helping to filter water. Part of the mission of the bridge will be environmental education, using these features to draw attention to the need for stewardship of this urban waterway.

Online 'Anacostia' Soap Opera Turns The Genre On Its Head

Online 'Anacostia' Soap Opera Turns The Genre On Its Head

"Currently, the fish are not edible" in the Anacostia, says Boyce. "They have cancerous tumors. That's how dirty this water is. It's a very interesting project from the standpoint of ecological health and public health."

Supporters are hoping the financial approach to the Bridge Park will become a model of public-private partnership. So-far, the city has earmarked more than $14 million to get the park started, and private donations have now reached nearly $1 million, according to Kratz.

An initial estimate of construction costs came in at $27 million, though the bridge also will need an endowment for upkeep.