Accessibility links
New Autopsy Report Suggests Michael Brown Was Shot At Close Range : The Two-Way The St. Louis Post-Disptatch has obtained an autopsy report on the shooting of Michael Brown. It leaves a lot of questions about the shooting of the 18-year-old by Officer Darren Wilson. 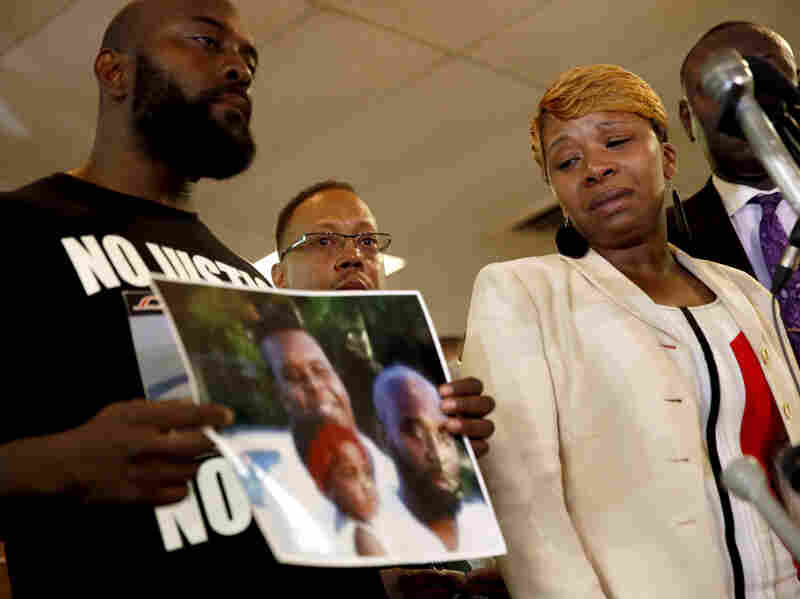 Lesley McSpadden, right, the mother of 18-year-old Michael Brown, watches as Brown's father, Michael Brown Sr., holds up a family picture of himself, his son, top left in photo, and a young child during a news conference Monday, Aug. 11, in Ferguson, Mo. Jeff Roberson/AP hide caption 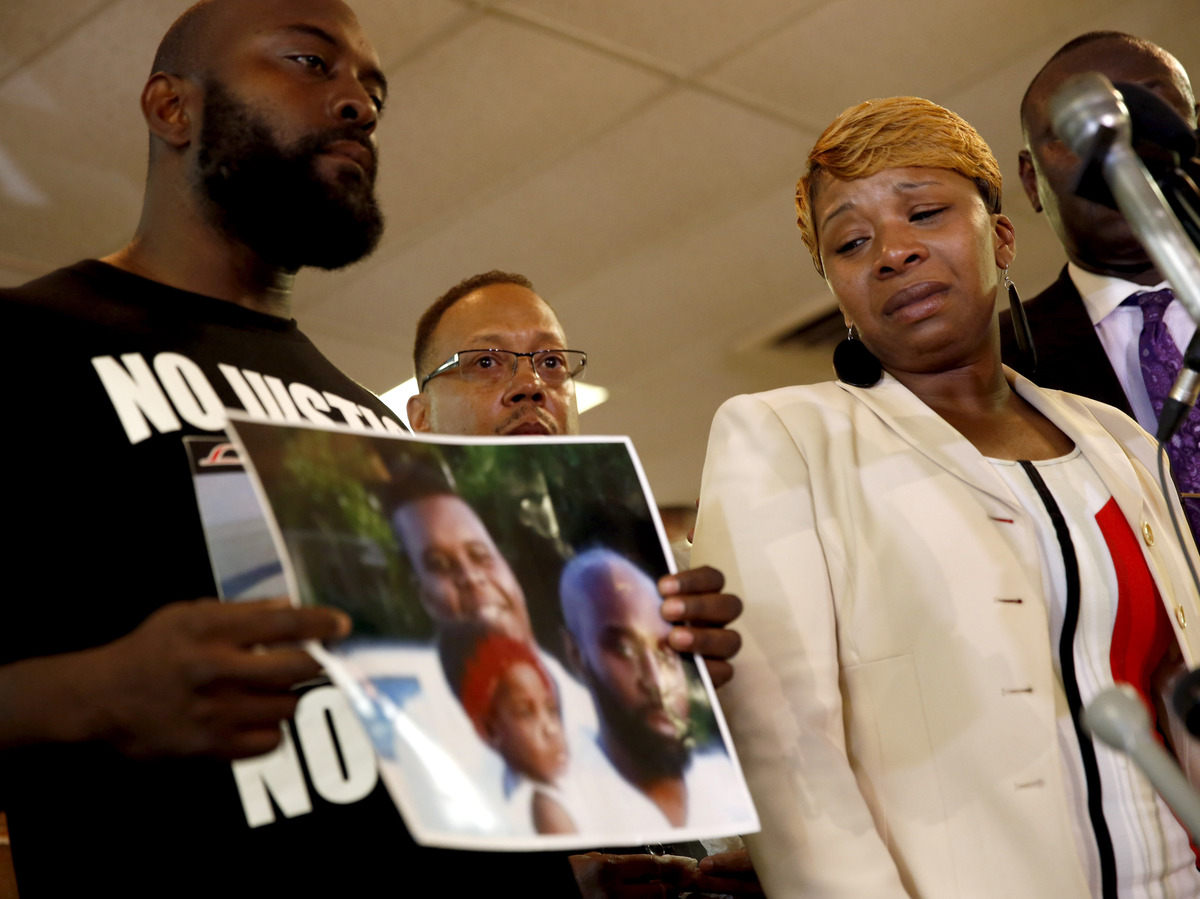 Lesley McSpadden, right, the mother of 18-year-old Michael Brown, watches as Brown's father, Michael Brown Sr., holds up a family picture of himself, his son, top left in photo, and a young child during a news conference Monday, Aug. 11, in Ferguson, Mo.

The St. Louis Post-Dispatch has published the official autopsy report on the shooting death of Michael Brown, the black, 18-year-old whose death at the hands of a white police officer set off weeks of protests this summer and fall in Ferguson, Mo.

The report suggests that Brown was shot at close range by Officer Darren Wilson. A toxicology report accompanying the autopsy report suggests Brown had marijuana in his system at the time of his death on August 9.

The St. Louis medical examiner helped interpret the reports' findings for the Post-Dispatch:

"The St. Louis medical examiner, Dr. Michael Graham, who is not part of the official investigation, reviewed the autopsy report for the newspaper. He said Tuesday that it 'does support that there was a significant altercation at the car.'

"Graham said the examination indicated a shot traveled from the tip of Brown's right thumb toward his wrist. The official report notes an absence of stippling, powder burns around a wound that indicate a shot fired at relatively short range.

"But Graham said, 'Sometimes when it's really close, such as within an inch or so, there is no stipple, just smoke.'

"The report on a supplemental microscopic exam of tissue from the thumb wound showed foreign matter 'consistent with products that are discharged from the barrel of a firearm.'

The Post-Dispatch also spoke with other experts who say the autopsy report shows Brown was facing the officer when Brown was shot in the forehead. This contradicts witness reports that Brown was shot while running away from Wilson with hands raised.

Benjamin Crump, the attorney for Michael Brown's family released a statement soon after the Post-Dispatch article was published. Crump said questions still remain about what exactly happened the day Brown was killed:

"We are not surprised by the information leaked last night by the St. Louis Medical Examiner's office. Several independent witnesses indicated there was a brief altercation between Michael Brown and Officer Wilson at the patrol car. What we want to know is why Officer Wilson shot Michael Brown multiple times and killed him even though he was more than 20 feet away from his patrol car; this is the crux of the matter!"

An earlier, private autopsy performed at the request of Brown's family found that Brown was shot six times, with a fatal shot to the skull. That report left many questions unanswered, as the private examiner did not have full access to all of the crime scene. Officials at the Department of Justice say they will also perform their own autopsy.

Earlier this month, the New York Times reported that Wilson testified two months after the shooting that he feared for his life just before he shot Brown.

"The police officer who fatally shot Michael Brown in Ferguson, Mo., two months ago has told investigators that he was pinned in his vehicle and in fear for his life as he struggled over his gun with Mr. Brown, according to government officials briefed on the federal civil rights investigation into the matter.

"The officer, Darren Wilson, has told the authorities that during the scuffle, Mr. Brown reached for the gun.

The shooting has brought to the forefront simmering tensions between Ferguson and St. Louis' African American communities and the people that police those communities, as well as the poor socioeconomic conditions of many black people in the St. Louis metro area.

Missouri's Governor Jay Nixon announced this week the formation of an independent commission to "study and make specific recommendations for how to make progress on the issues raised by events in Ferguson."

The Governor said that the commission, through an executive order, will be charged with three main goals: