Accessibility links
Recently Returned From Africa, Doctor Tests Positive For Ebola At NYC Hospital : The Two-Way A doctor, identified as Craig Spencer, who had worked in Ebola-stricken countries with Doctors Without Borders, had been monitoring his health and arrived at the hospital today with a fever. 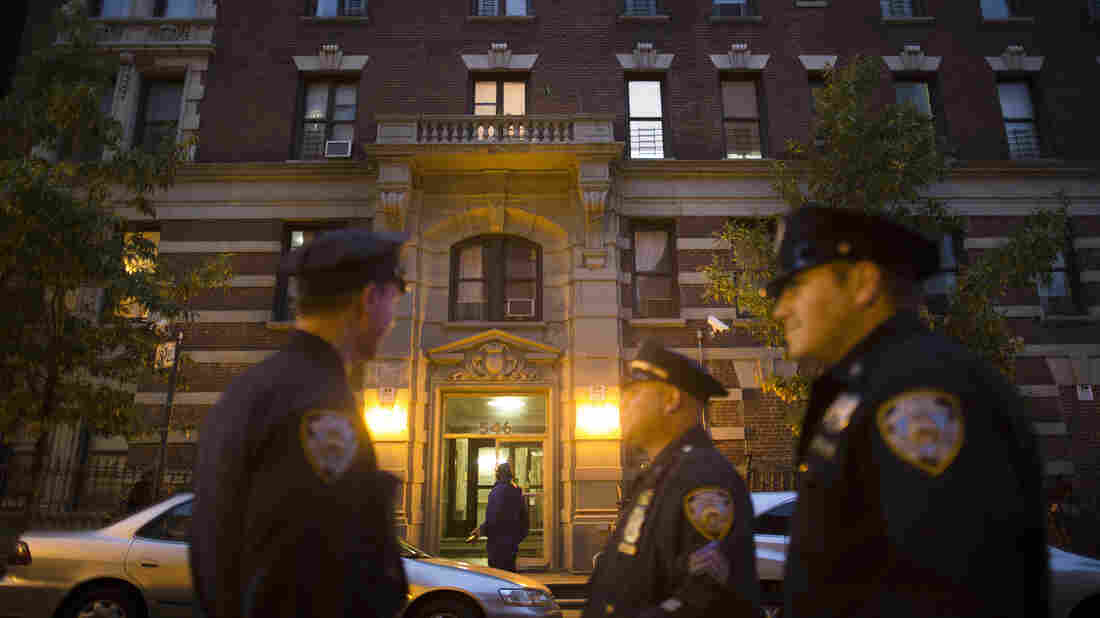 Police officers stand outside the home of Craig Spencer, a Doctors Without Borders physician who recently returned to the city after treating Ebola patients in West Africa, on Thursday in New York. Spencer tested positive for the virus, according to preliminary test results, city officials said. John Minchillo/AP hide caption 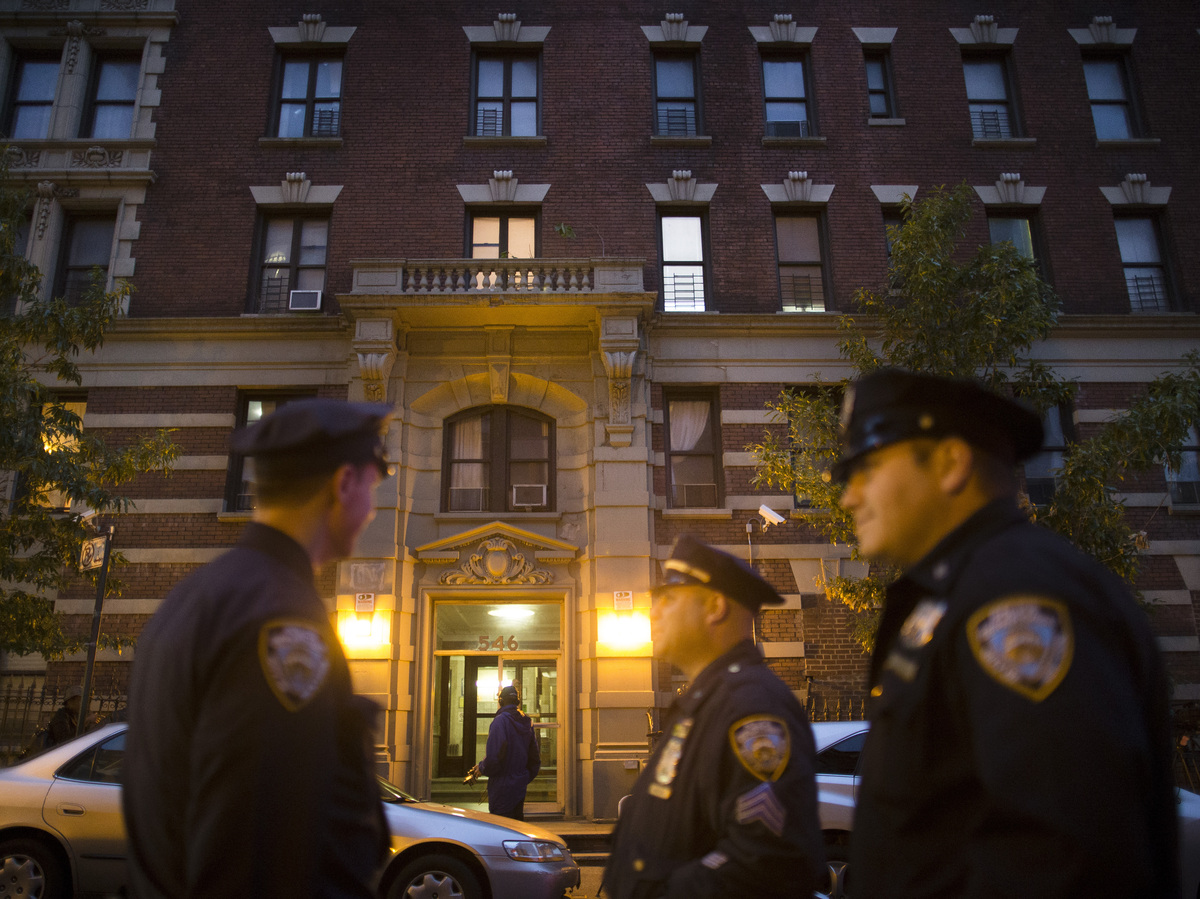 Police officers stand outside the home of Craig Spencer, a Doctors Without Borders physician who recently returned to the city after treating Ebola patients in West Africa, on Thursday in New York. Spencer tested positive for the virus, according to preliminary test results, city officials said.

According to a statement from Doctors Without Borders, a doctor returned to the United States Oct. 12 after working with Ebola patients in Guinea. 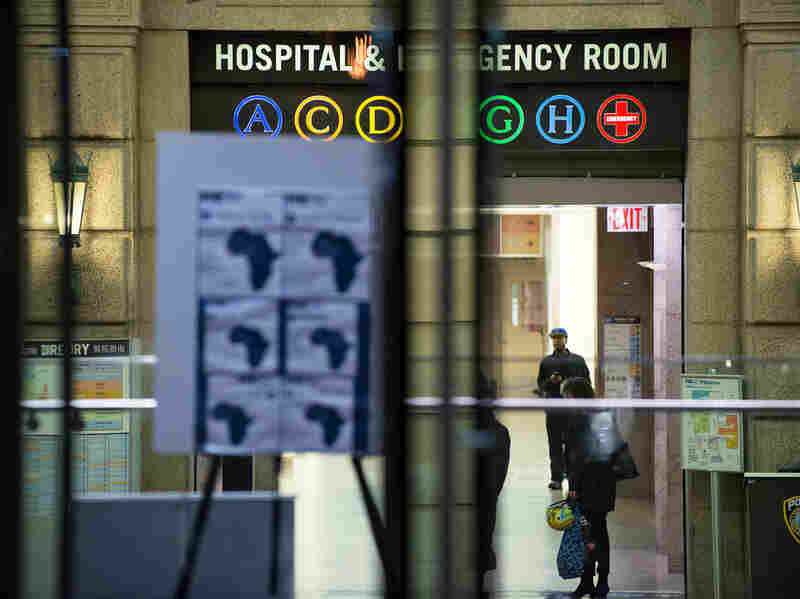 A health alert regarding Ebola is displayed Thursday at the entrance to Bellevue Hospital in New York City. Bryan Thomas/Getty Images hide caption 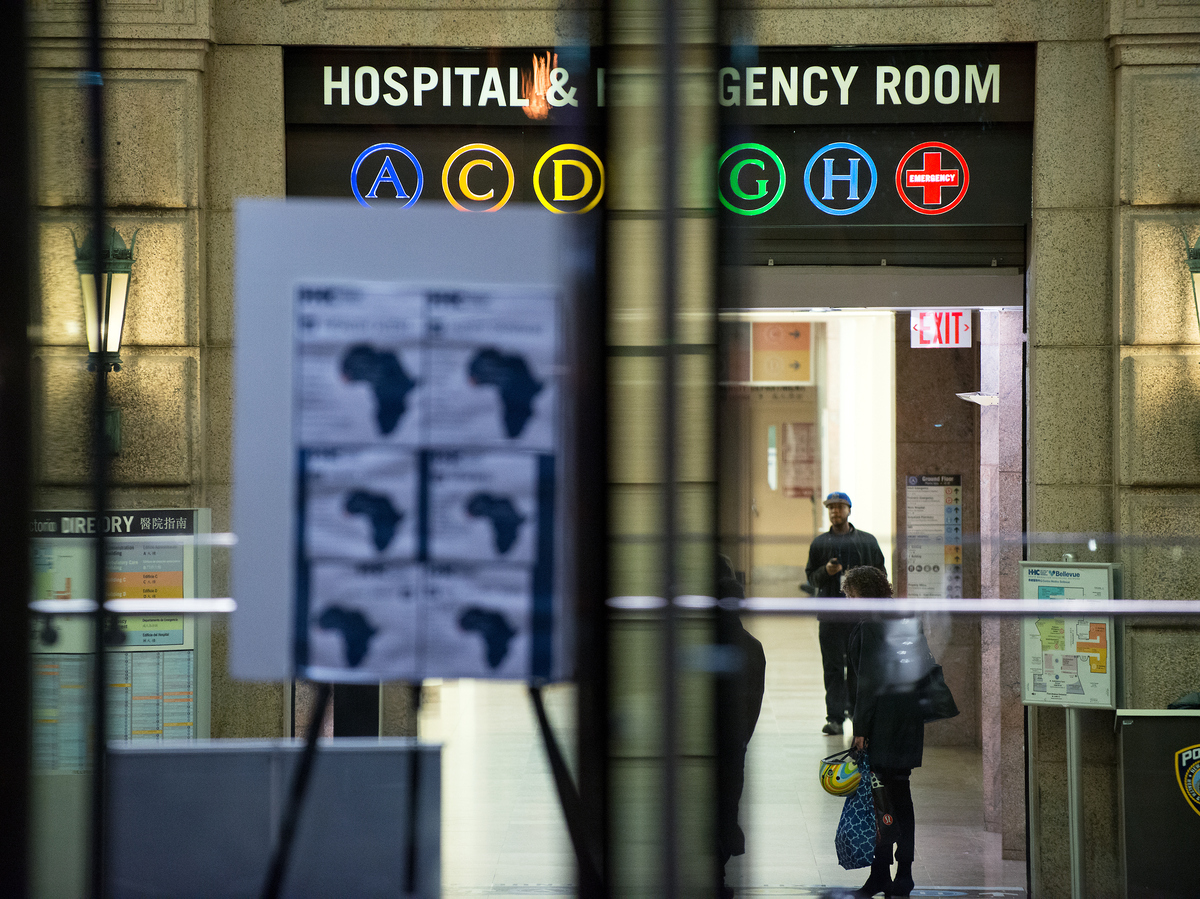 A health alert regarding Ebola is displayed Thursday at the entrance to Bellevue Hospital in New York City.

The man — who has been identified as Craig Spencer, 33 — notified the nonprofit's office that he had a fever this morning and he was transported to Bellevue Hospital, where he also presented with gastrointestinal issues. Spencer had not been symptomatic before Thursday morning, which reduces the risk that he could have passed the infection on to others.

At the news conference, de Blasio emphasized the unlikelihood of contracting Ebola through casual contact, saying that riding on the same subway with or living nearby an Ebola patient does not pose a significant risk.

The patient's apartment, his fiance and two friends with whom Spencer had had close contact have been quarantined, according to Bassett.

A bowling alley in the Williamsburg neighborhood that the patient recently had visited closed down out of an abundance of caution, and would be examined by health officials on Friday.

My Son Is Doctors Without Borders' 1,000th Ebola Survivor

In a statement, New York-Presbyterian/Columbia University Medical Center said Spencer is one of their doctors who "went to an area of medical crisis to help a desperately underserved population."

NPR member station WNYC reports that Health Department specialists "are tracing all people who may have had contact with the patient and could be at risk. If necessary, those people could be placed under quarantine."

New York Gov. Andrew Cuomo said at the Thursday night press conference that he had spoken with Ron Klain, the country's newly appointed Ebola czar, and that Centers for Disease Control teams were on the way to New York.

Thomas Frieden, director of the CDC, said a team from the agency coincidentally had just completed an evaluation of Bellevue Hospital's preparedness for treating Ebola and found that the staff were fully trained in proper protocols.

Doctors Without Borders, also known as MSF, notes that its staff members go through a debriefing process when they return to the U.S. from a field assignment related to Ebola. In that debrief, MSF said in a press release, aid workers are informed of the following guidelines:

3. Be aware of relevant symptoms, such as fever

4. Stay within four hours of a hospital with isolation facilities

5. Immediately contact the MSF-USA office if any relevant symptoms develop

"Our colleague in New York followed the MSF protocols and guidelines since returning from West Africa," the statement said. It adds:

"As long as a returned staff member does not experience any symptoms, normal life can proceed. Family, friends, and neighbors can be assured that a returned staff person who does not present symptoms is not contagious and does not put them at risk. Self quarantine is neither warranted nor recommended when a person is not displaying Ebola-like symptoms."