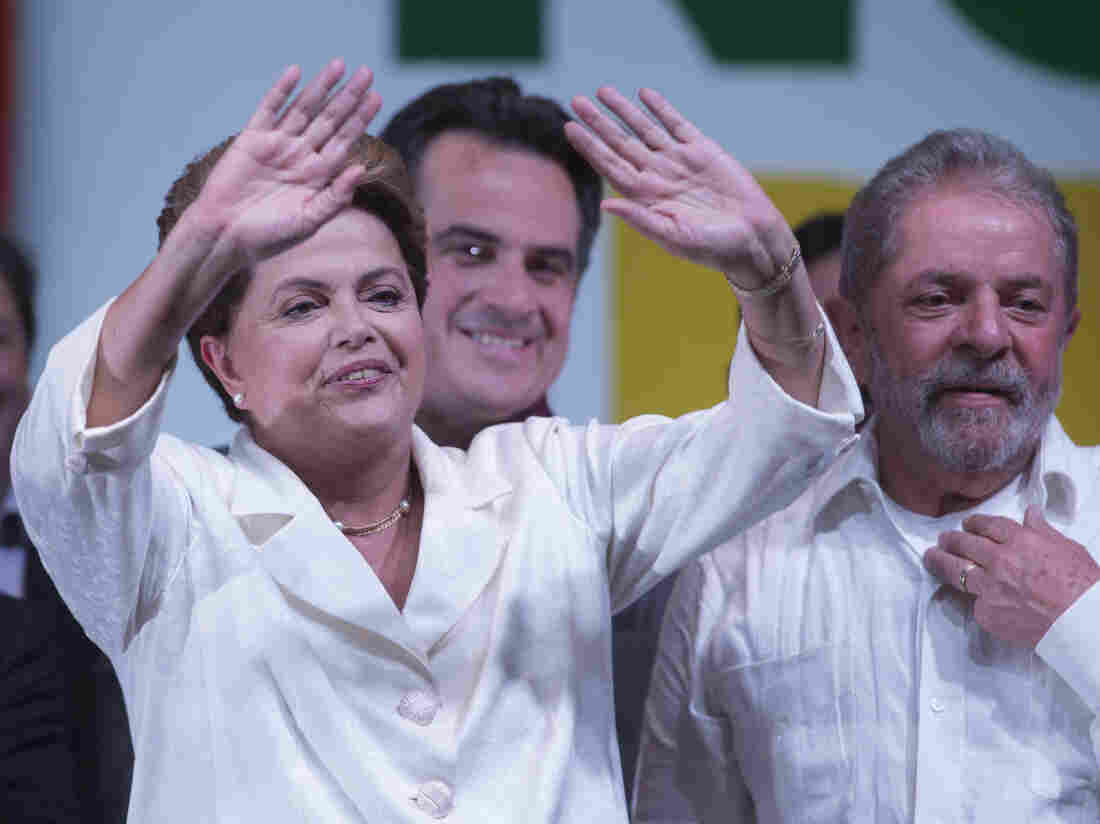 Brazil's President Dilma Rousseff waves to supporters as she celebrates with Brazil's Former President Luiz Inacio Lula da Silva at a press conference in a hotel in Brasilia, Brazil, on Sunday.

NPR's Lourdes Garcia-Navarro has been covering the election. She says that the elections shows that the country is "divided over its future," and called the campaign "bitter, bruising" and "filled with attack ads and corruption scandals."

The AP also says this election was a contentious battle:

"Rousseff and Neves have fought bitterly to convince voters that they can deliver on both growth and social advances. This year's campaign is widely considered the most acrimonious since Brazil's return to democracy in 1985, a battle between the only two parties to have held the presidency since 1995.

"Neves has hammered at Rousseff over a widening kickback scandal at state-run oil company Petrobras, with an informant telling investigators that the Workers' Party directly benefited from the scheme.

"Rousseff rejected those allegations and told Brazilians that a vote for Neves would be support for returning Brazil to times of intense economic turbulence, hyperinflation and high unemployment, which the nation encountered when the Social Democrats last held power."

And the BBC reports developments from candidates besides Rousseff and Neves also made this election a dramatic one:

"The election comes after weeks of intensive campaigning by the two candidates and a presidential race that took a tragic turn after Eduardo Campos, a main opposition candidate, was killed in a plane crash in August.

Silva came in third after the first round of voting.

The AP reports that before voting in the runoff in southern Brazil, Rousseff said, "We've worked so hard to better the lives of the people, and we won't let anything in this world, not even in this crisis nor all the pessimism, take away what they've conquered."

After the election results were announced, Rousseff tweeted "Thank you very much" to her followers in Portuguese.