Accessibility links
Russian Engines Could Be Focus Of Antares Launch Failure Probe : The Two-Way NK-33 engines, originally destined for a Soviet-era moon shot that never got off the ground and later used in the Antares, are suspect, some scientists say.

Russian Engines Could Be Focus Of Antares Launch Failure Probe

Russian Engines Could Be Focus Of Antares Launch Failure Probe 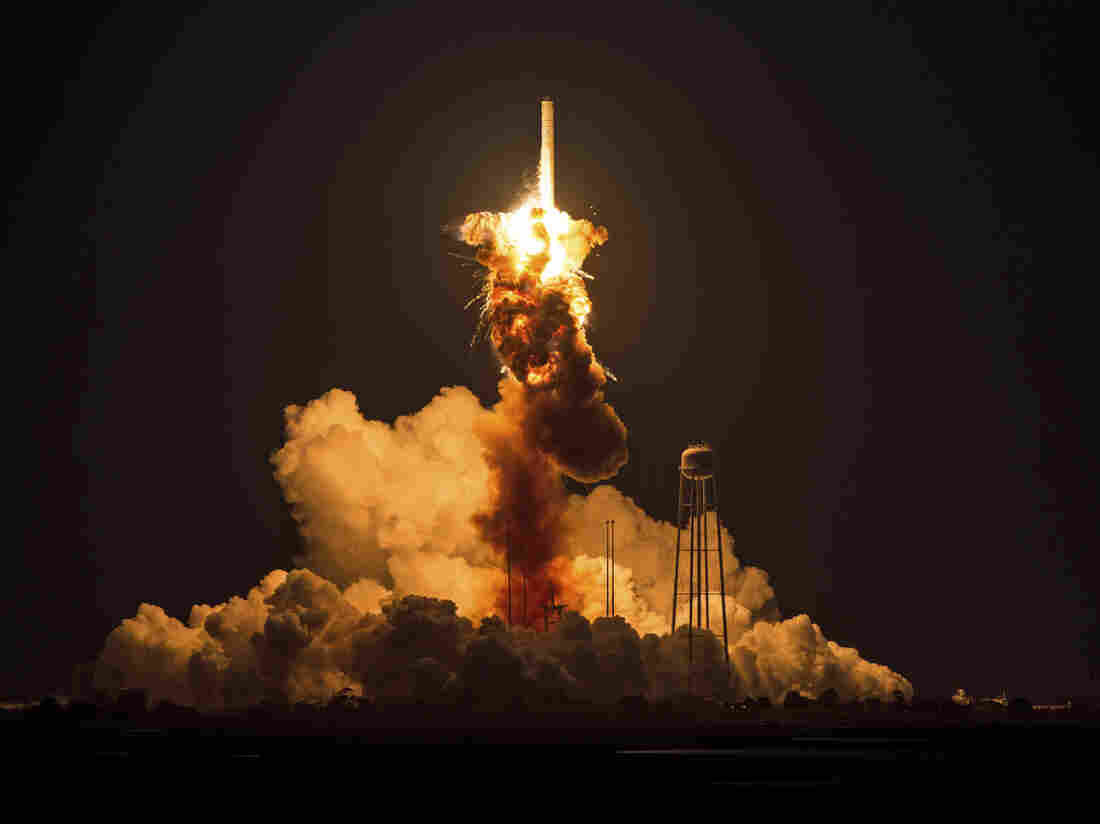 NPR's Geoff Brumfiel reports that as investigators examine what went wrong with the launch of an unmanned Antares rocket on Tuesday, they'll likely take a hard look at powerful engines originally destined to send cosmonauts to the moon, a project that was scrapped by the USSR more than four decades ago.

Geoff says that although the investigation is just starting, the NK-33 rocket engine is already a focus. It was produced for the N1 moon rocket — the Soviet Union's answer to the U.S. Saturn V. But the N1 became mired in development problems, and the Soviet moon project, hopelessly behind the Americans, was quietly scuttled circa 1974.

Fast-forward to 2010: The NK-33s were refurbished and re-designated by Aerojet Rocketdyne as the AJ26 and sold to Dulles-based Orbital Sciences for use in Antares. Although four previous flights of Antares have gone off without a hitch, one of the engines failed during testing earlier this year, Geoff says.

"They were in fact built in Russia about 40 years ago and stored in plastic bags after their moon program was canceled," Jonathan McDowell, of the Harvard-Smithsonian Center for Astrophysics, tells NPR.

As we reported on Tuesday, the Antares, which had been meant to rendezvous with the International Space Station ferrying 5,000 pounds of supplies and experiments, failed catastrophically seconds after liftoff from the Wallops Island, Va., facility.

Shortly after the failed launch, Orbital Sciences Executive Vice President Frank Culbertson appeared to be trying to head off any criticism for choosing the powerful engines for Antares' critical first stage, which uses two of the modified NK-33s.

"When you look at it, there are not many other options around the world in terms of using power plants of this size," Culbertson was quoted by The Guardian as saying. "Certainly not in this country, unfortunately."

Russianspaceweb.com says of the NK-33: "After the ill-fated lunar effort was aborted in 1974, dozens of already manufactured NK-33s ended up in storage. For decades, engine developers searched for a new job for the capable power plant. Finally, at the end of the first decade of the 21st century, NK-33 had a real chance to fly, this time powering both American and Russian rockets. By 2010, the Russian government reportedly came close to making a decision to jump-start mass production of the NK-33 engine."

In a press release put out by Orbital Sciences four years ago, the private space-launch company said: "Since its original development, more than 200 NK-33 engines were built and 575 engine tests conducted, totaling more than 100,000 seconds of test time."

Coincidentally, the NK-33 was on a sanctions list put out by Russia earlier this year in retaliation for U.S. sanctions in the wake of Moscow's annexation of Crimea. However, Russia specifically exempted sale of the NK-33s (as well as another engine, the RD-180) for nonmilitary use.

During its second launch attempt in 1969, the N1 suffered a catastrophic failure seconds after liftoff, causing one of the largest-ever artificial nonnuclear explosions. Although widely known in Western intelligence circles, the N1 moon program was an official state secret until it was revealed in 1989.