Accessibility links
After A Resounding GOP Victory, 6 Tidbits That Tell The Story : The Two-Way The midterms marked a drubbing for Democrats. Republicans picked up at least seven Senate seats, wresting control of the chamber and setting up a divided government for at least the next two years.

After A Resounding GOP Victory, 6 Tidbits That Tell The Story

After A Resounding GOP Victory, 6 Tidbits That Tell The Story 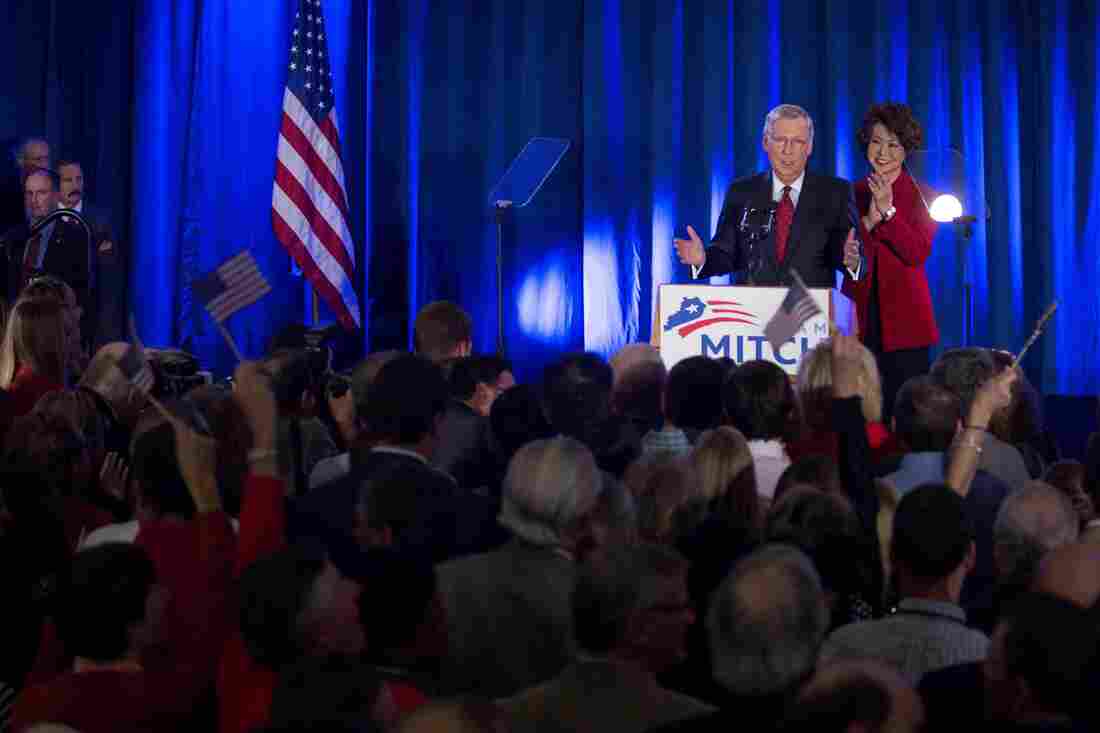 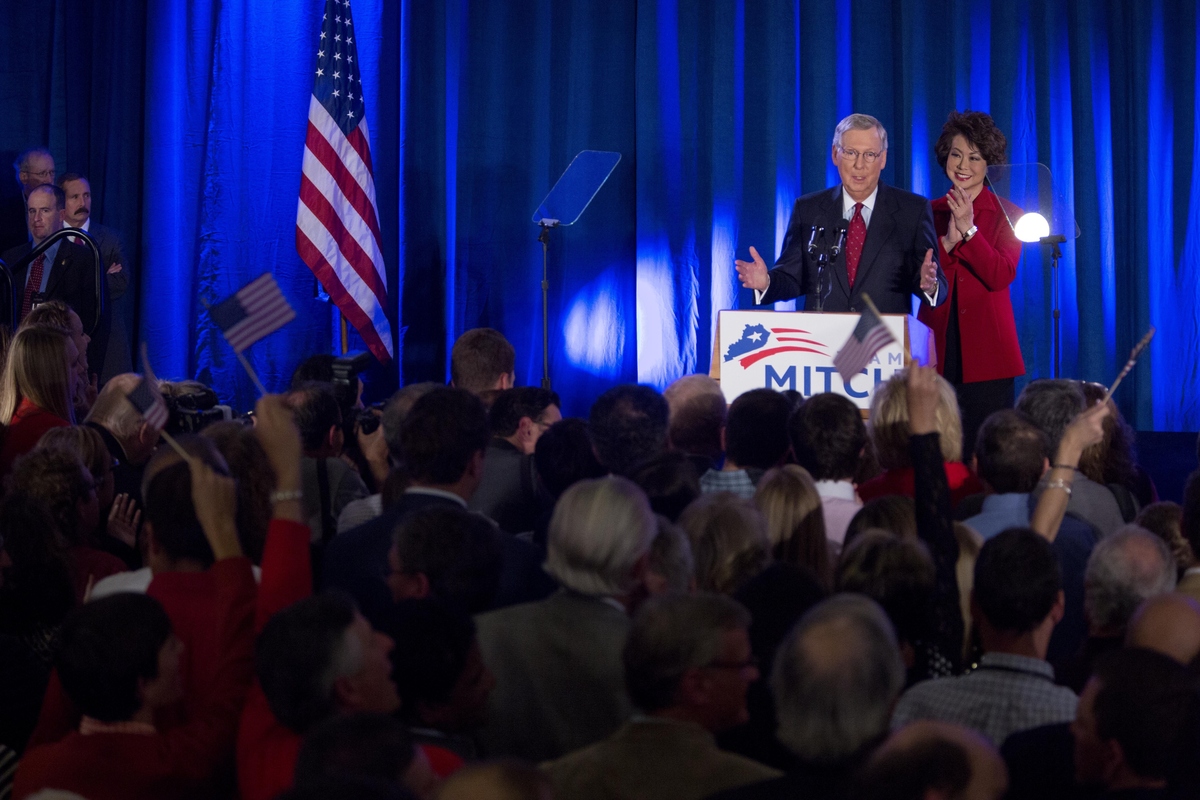 Sen. Mitch McConnell is accompanied by his wife, Elaine Chao, at his victory event Tuesday in Louisville, Ky.

The big headline from last night's midterm elections is that Republicans walloped the Democrats, cashing in on enormous discontent about the state of the country to pick up seven Senate seats and wrest control of the chamber.

That, of course, sets up divided government for the next two years: a Democratic president and a GOP-controlled legislature.

Here are six tidbits that tell the story:

-- A Call For Bipartisanship?: Sen. Mitch McConnell of Kentucky handily won his race — one of the toughest and most expensive fights — with 56 percent of the vote.

During his victory speech, the next majority leader seemed to leave the door open to bipartisanship.

"I don't expect the president to wake up tomorrow and view the world any differently than he did when he woke up this morning," McConnell said. "He knows I won't either. But I do think we have an obligation to work together on issues where we can agree. Just because we have a two-party system doesn't mean we have to be in perpetual conflict."

President Obama, for his part, has invited a group of bipartisan congressional leaders to the White House on Friday.

-- A Season Of Discontent: Exit polls showed that this election hinged on popular discontent about the way the country is being run.

In other words, the vote was essentially a repudiation of Obama. Here's how The New York Times parses the exit polls:

"Just two years after Mr. Obama's re-election, the midterm results underscored just how far he has fallen in the public mind. Nearly six out of 10 voters on Tuesday expressed negative feelings about his administration, according to exit polls. For every two voters who said they had cast ballots to support Mr. Obama, three said they were voting to express their opposition to him.

"The electorate was deeply pessimistic about the country, with seven out of 10 describing the economy as not so good or poor and eight out of 10 expressing worry about the direction of the economy in the next year.

"Numbers like that discouraged Mr. Obama's aides, who said they had not done a good job getting out the president's record, noting that the deficit has fallen by half, unemployment is now below 6 percent, the price of gasoline has fallen sharply and the economy is growing at a decent rate."

Dan Balz, of The Washington Post, says those exit polls should worry Democrats, because the electorate was not as Republican as it was four years ago, yet it handed Republicans a resounding victory.

-- It Was A Bad Map For Democrats: In an interview with NPR member station WNPR, President Obama said this cycle just included a lot of unfavorable territory for Democrats.

"In this election cycle, this is probably the worst group of states for Democrats since Dwight Eisenhower," Obama said. "There are lot of states that are being contested ... that just tend to tilt Republican. Democrats are competitive, but they tend to tilt that way."

-- Let's Not Forget About The House: The GOP already had control of the House, but on Tuesday, they added 14 more seats, giving Republicans 242 members as of Wednesday morning.

-- GOP Has To Govern: In an interview with NPR last night, former Republican congressman Tom Davis gave some advice to his party about setting their candidate up for a good presidential run in 2016:

"They are going to have control of the Senate and the House, and they are going to have to put some work products forward. The president can veto them, but they can't fight among themselves over issues like the debt ceiling, budgets and appropriations bill... Because presidential elections, unlike midterms, are all about the future. And if the Republicans show themselves as unable to govern, then I think its going to haunt whoever their candidate is next time. On the other hand, if they put forward something, I think they are in the game."

-- Democrats Look To The Future: We know you don't even want to think about it, but the main headline in Politico this morning is a look-ahead at 2016.

These midterms were such a huge, demoralizing loss, Politico argues, that Democrats will want to move away from it quickly by anointing its next leader. The front-runner, of course, is Hillary Clinton. Politico reports:

"Clinton has spent two years as the prohibitive Democratic frontrunner in the polls despite keeping politics largely at arm's length until the end of the midterms. Some of her advisers have suggested opening an exploratory committee this year to allow her to raise money sooner, while others are adamant that she should wait until next year.

"Some Democrats said Tuesday night that Clinton will want to wait a bit to let the 2014 midterms pass, and to get some distance between herself and a bloodbath for her party. She also genuinely doesn't seem ready to flip a switch on a campaign: A number of decisions still remain about staffing and, more importantly, messaging.

"But others believe Clinton can't afford to be coy about her intentions beyond the next few weeks, and forming an exploratory committee without an official announcement will not satisfy some donors and activists."