Accessibility links
Voters In Texas City Approve Ban On Fracking : The Two-Way It's the first time a city in the energy-friendly state has voted to ban hydraulic fracturing. The vote in Denton is likely to face legal challenges. 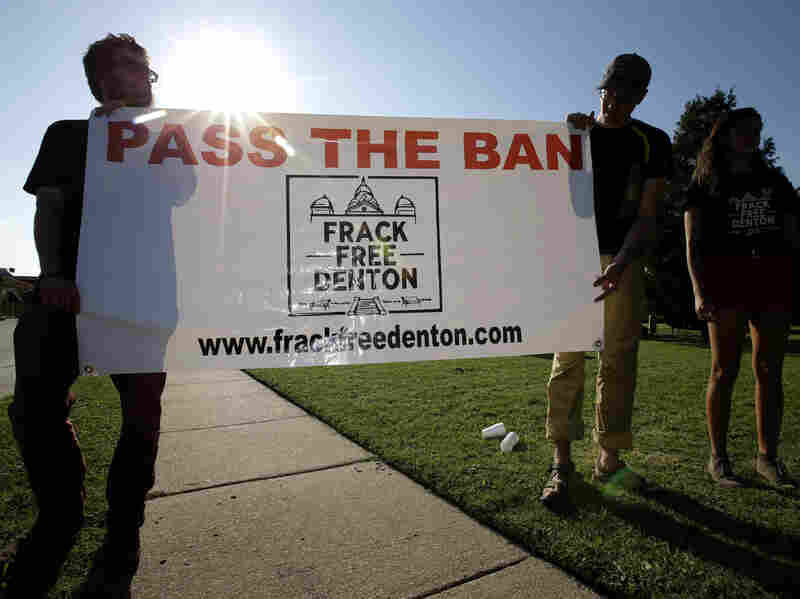 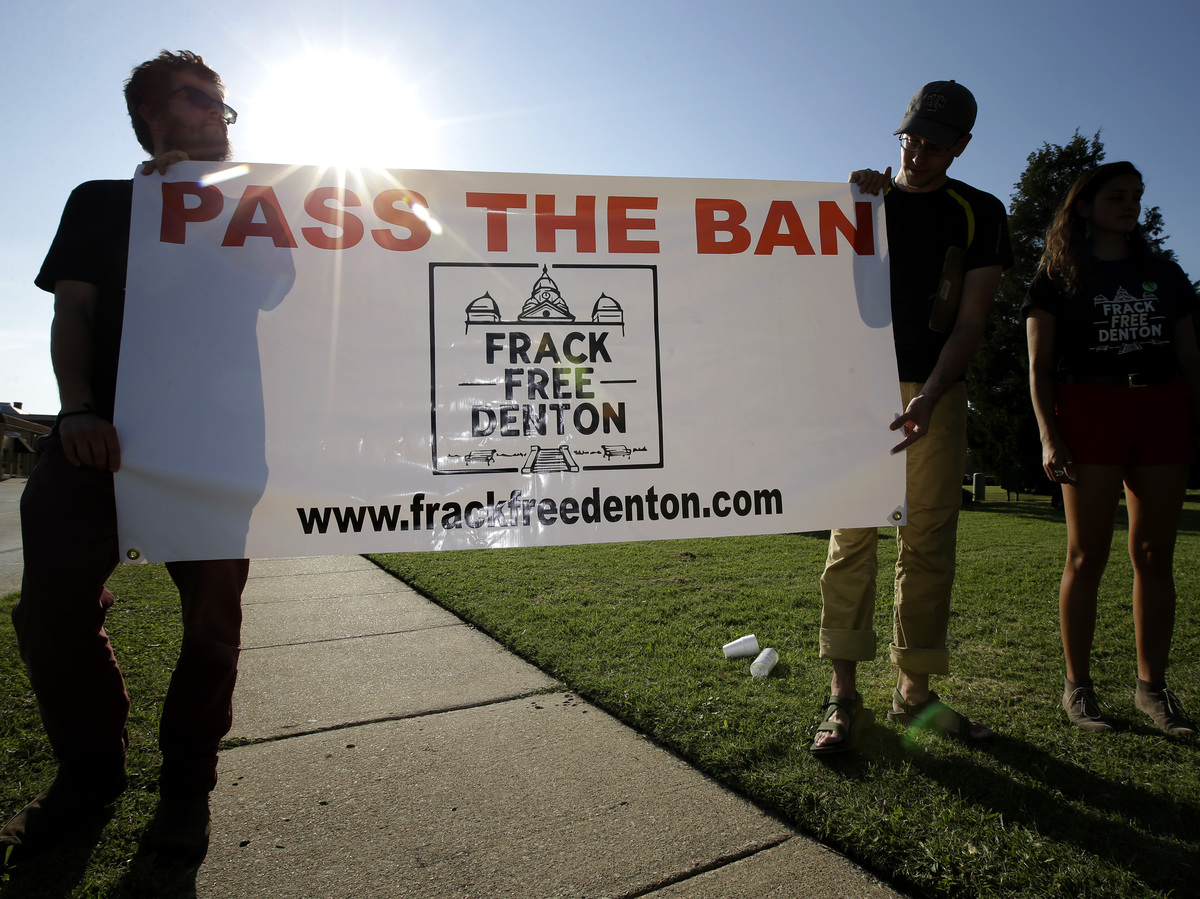 From left, Topher Jones, Edward Hartmann and Angie Holliday hold a campaign sign outside City Hall in Denton, Texas, on July 15, 2014. Voters in the college town approve a ban on fracking on Tuesday.

Residents of Denton, Texas, voted Tuesday to ban hydraulic fracturing in the city.

According to unofficial results posted on the city's website, 58.64 percent of voters supported banning the controversial drilling method that is also called fracking; 41.36 percent voted against the proposition. It's the first time a city in the energy-friendly state has voted to ban fracking.

The vote is expected to be challenged, but Mayor Chris Watts said he would defend the ban.

"Hydraulic fracturing, as determined by our citizens, will be prohibited in the Denton city limits," he said.

Texas Railroad Commissioner David Porter, an opponent of the ban, said voters had fallen "prey to scare tactics and mischaracterizations of the truth."

"This issue will continue to be hotly contested. I am confident that reason and science will triumph, and the ban will be overturned," he said.

Supporters of fracking say it creates jobs and wealth, but its opponents say the environmental and health risks outweigh any benefits it provides.

Cathy McMullen, head of the Denton Drilling Awareness Group, which placed the issue on the ballot, called it a victory for the citizens of Denton.

"We know the oil and gas industry is going to sue to try to overturn the fracking ban," she said in a statement. "But we lawyered this ban every which way before launching this effort. And we consulted legal precedents for Texas home rule cities like Denton. And we're confident it will stand up."

The ban will take effect Dec. 2.

The Fort Worth Star-Telegram reports that the vote divided the community. Here's more from the newspaper:

"Denton is in the middle of the Barnett Shale, which covers about 5,000 square miles in North Texas, one of the nation's largest natural gas fields. There are 272 active wells in the Denton city limits and 212 others within its extraterritorial jurisdiction, according to the city's website. ...

"Over the years, Denton, like Fort Worth, Arlington and Mansfield, has revised its ordinances to deal with urban drilling. In its most recent change, Denton imposed a 1,200-foot setback between wells and homes and other structures. But some drillers say their permits, issued before the stronger restrictions were in place, allowed them to sink wells at shorter distances. ...

"Frustrated with how the city was handling the situation, McMullen's group petitioned to put the ordinance on the ballot. The referendum does not ban all drilling, only hydraulic fracturing, a technique that pumps water, sand and chemicals underground to shake gas loose from the shale.

"But drillers say that traditional wells are not economical and that the ban would effectively stop drilling. They also said the ban usurps the authority of state agencies like the Railroad Commission, which is charged with regulating drilling."

The Wall Street Journal reports that residents of Athens, Ohio, also approved a ban on fracking, while those in three other places in the state — Gates Mills, Kent and Youngstown – overturned bans on the technique.

In California, voters in San Beniro and Mendocino Counties approved bans on fracking while those in Santa Barbara rejected a similar proposal, according to member station KPCC.