Accessibility links
Book News: John Steinbeck Story Resurfaces After 70 Years : The Two-Way Once read on radio by Orson Welles, "With Your Wings" had never been seen in print. Now, after a fateful discovery, it's set to be published. Also: Joshua Ferris has won the Dylan Thomas Prize. 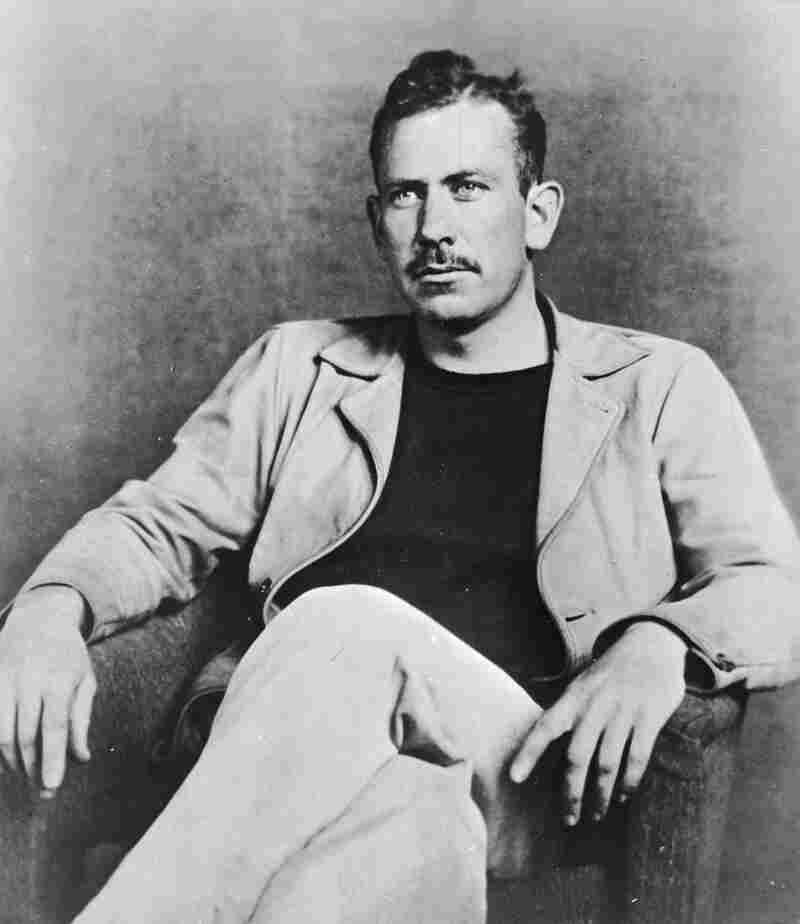 John Steinbeck, here seen as a young man, sits for his portrait. Years later, his story "With Your Wings" would be read on air — then disappear for decades. Hulton Archive/Getty Images hide caption 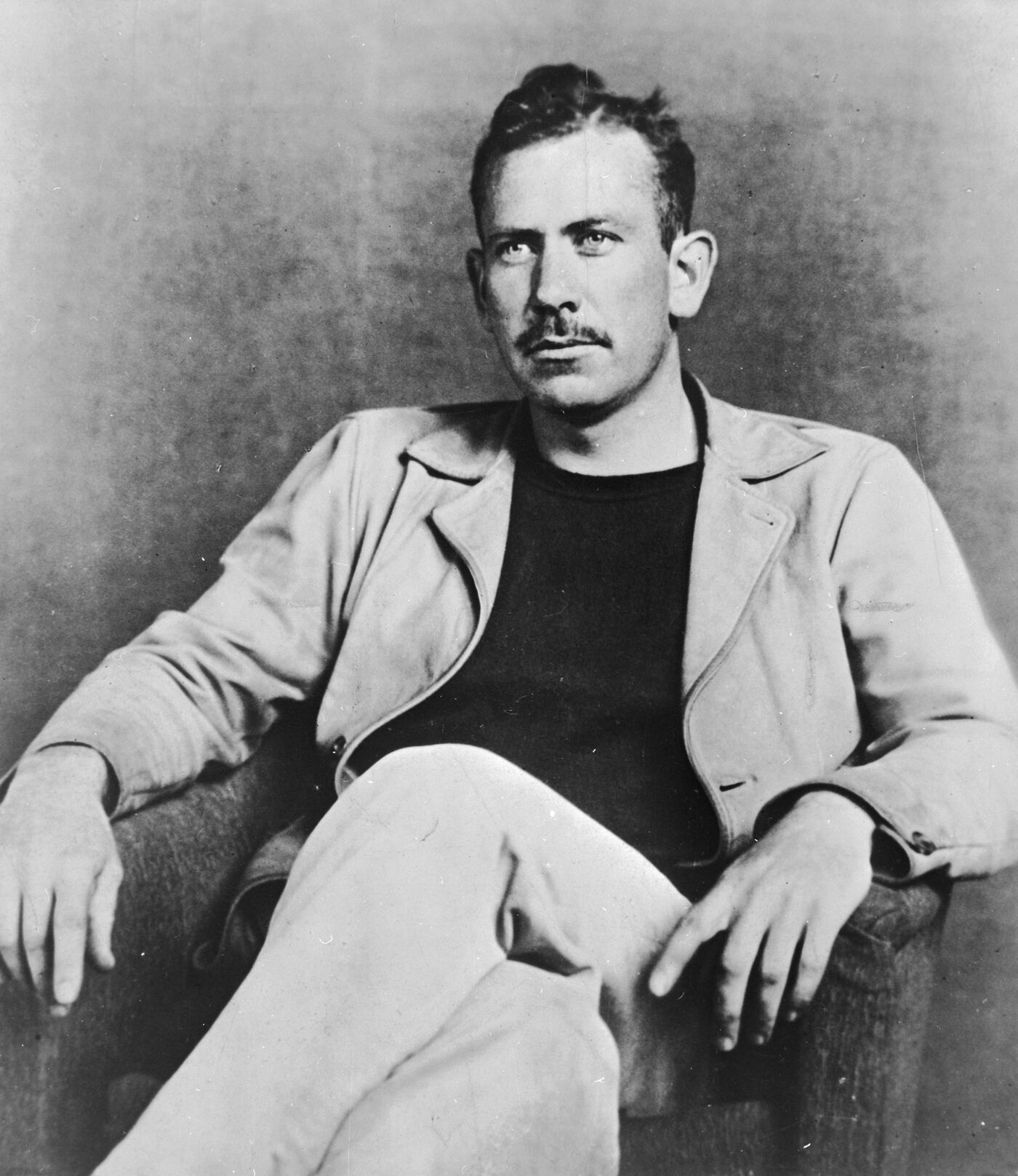 John Steinbeck, here seen as a young man, sits for his portrait. Years later, his story "With Your Wings" would be read on air — then disappear for decades.

More than 70 years since it surfaced in public, John Steinbeck's story "With Your Wings" will see publication in print today for the first time Friday. The Associated Press reports that, despite being read during a 1944 radio broadcast by Orson Welles, the story had never been put to page and released — so far as experts are aware.

Andrew F. Gulli, managing editor of The Strand Magazine, reportedly stumbled across a transcript of Welles' broadcast during a trawl through the archives at University of Texas at Austin. The piece itself is very much of its time, a wartime story that dwells on the challenges of a black American pilot's return home.

"Steinbeck was an idealist. He saw America as this wonderful land with so much to offer but on the flip side, he could see inequality, he could see greed and excess destroying the working classes," Gulli told the AP in an email. "This story strikes me as an effort to show middle America that African-Americans were carrying on a huge burden in defending the United States and the allies during the war."

The story appears in the quarterly's holiday issue, which is out today.

In The Nick Of Time: Joshua Ferris has won the 2014 International Dylan Thomas Prize. In a ceremony Thursday night, the American author's recent novel, To Rise Again at a Decent Hour, beat out a shortlist of six other books that included such favorites as The Luminaries, Eleanor Catton's 2013 Man Booker Prize winner; and Eimear McBride's Baileys Prize-winning A Girl is a Half-Formed Thing.

The Dylan Thomas prize, which awards just under $50,000 to "the best published or produced literary work in the English language," this year bumped up its age limit from 30 to 39 years old, the age at which the poet himself died. And the rule change came not a moment too soon for Ferris, who turns 40 on Saturday.

Peter Stead, the president of the prize, raved about this year's winner, calling it "a novel which encapsulates the frustration, energy and humor that goes into the making of New York."

It's a sentiment echoed by Michael Schaub, in his review of the book for NPR. "To Rise Again at a Decent Hour isn't just one of the best novels of the year, it's one of the funniest, and most unexpectedly profound, works of fiction in a very long time."

1st new comic in 20 years from creator of Calvin and Hobbes. Delightful and needs no caption. http://t.co/qE0xiBTS3R pic.twitter.com/nWpcwdmygN

Calvin's Creator, Back In Panels: Bill Watterson, the man behind the beloved Calvin and Hobbes, has made another tentative step back toward the spotlight this week. Tapped for honors at the Angouleme International Comics Festival in France, Watterson drew up a brand-new strip to serve as the festival's poster. Reporter Steve Silberman tweeted the madcap results.

Audio Expansion At Scribd: The e-book subscription service Scribd has announced a massive expansion to its catalog, adding more than 30,000 audiobooks to the e-book titles it already offers. The move adds a new layer to Scribd, which began in 2007 as a document sharing website and just over a year ago launched its e-book lending arm.

The new audiobooks will be available to subscribers under their current plan of $8.99, and the library will feature not just older titles, but frontlisted ones. With the new addition, Scribd says its e-book service now totals more than 500,000 books.

Young Obsession: At The Millions, Jared Young offers an appreciation of Michael Crichton, who passed away six years ago this week. With it, Young pairs a few stories of his own desperate attempts — and failures — to follow in the considerable footsteps of the man himself.

"What fascinated me about Michael Crichton's books was that they were so utterly, magnificently plausible," he writes. "It had seemed, at the outset, like an easy thing to accomplish, but I soon faced the unfortunate truth: I wasn't a novelist ... not, at least, in the meticulous, academic manner of Michael Crichton."