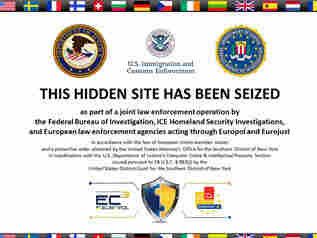 The message that greets visitors to the sites that were seized in coordinated raids in the U.S. and across Europe. Europol hide caption

European and U.S. officials have arrested 17 people in a crackdown on underground online markets, including the Silk Road 2.0, that sell drugs and weapons, Europe's police agency said today in a statement.

The coordinated raids took place on Thursday across 16 European countries and the U.S. Those arrested were the vendors and administrators of the underground marketplaces. More than 410 hidden services were taken down, the statement said. Bitcoins worth $1 million, 180,000 euros in cash ($223,836), drugs, gold and silver were seized in the raids.

Troels Oerting, head of Europol's European Cybercrime Center, said in the statement that the operations hit services on the Darknet using Tor "where, for a long time, criminals have considered themselves beyond reach."

Tor refers to The Onion Router, a free network that makes Internet Protocols anonymous. It is used for both legal as well as illegal purposes. Reuters noted that it's used by activists in countries where the Web is censored.

Today's announcements come a day after the The FBI announced that it had arrested the alleged owner and operator of Silk Road 2.0, 26-year-old Blake Benthall, in San Francisco. The site allows users to anonymously buy illegal goods and services. The arrest was part of the same operation. Here's more from the FBI statement:

"Silk Road 2.0 was created in the wake of the Government's October 2013 seizure of the website known as 'Silk Road' and the arrest of its alleged owner and operator, Ross William Ulbricht, a/k/a 'Dread Pirate Roberts.' The original Silk Road website had been designed to enable people anywhere in the world to buy and sell illegal drugs and other illegal goods and services anonymously and beyond the reach of law enforcement. Before its seizure in October 2013, Silk Road was used extensively to facilitate such transactions."