Accessibility links
Comet's Rugged Landscape Makes Landing A Roll Of The Dice : The Two-Way Researchers admit their estimates that the comet was "potato-shape" were way off. Luck may now be the deciding factor in the attempt for a soft landing early Wednesday.

Comet's Rugged Landscape Makes Landing A Roll Of The Dice

Comet's Rugged Landscape Makes Landing A Roll Of The Dice

A 2013 simulation shows how the landing should happen.

The European Space Agency is about to try to put a probe where none has gone before: on the surface of a comet.

The lander, called Philae, is set to be released from the Rosetta spacecraft early Wednesday ET. If all goes as planned, it will undergo a seven-hour descent and reach the comet's surface sometime before noon ET. A full timeline is available on ESA's website, and the entire landing is being webcast.

But whether Philae can stick the landing remains to be seen. The comet's rugged landscape will push the probe to its limits.

The scientists who designed it 20 years ago admit that at the time, they had no idea what they were getting into. 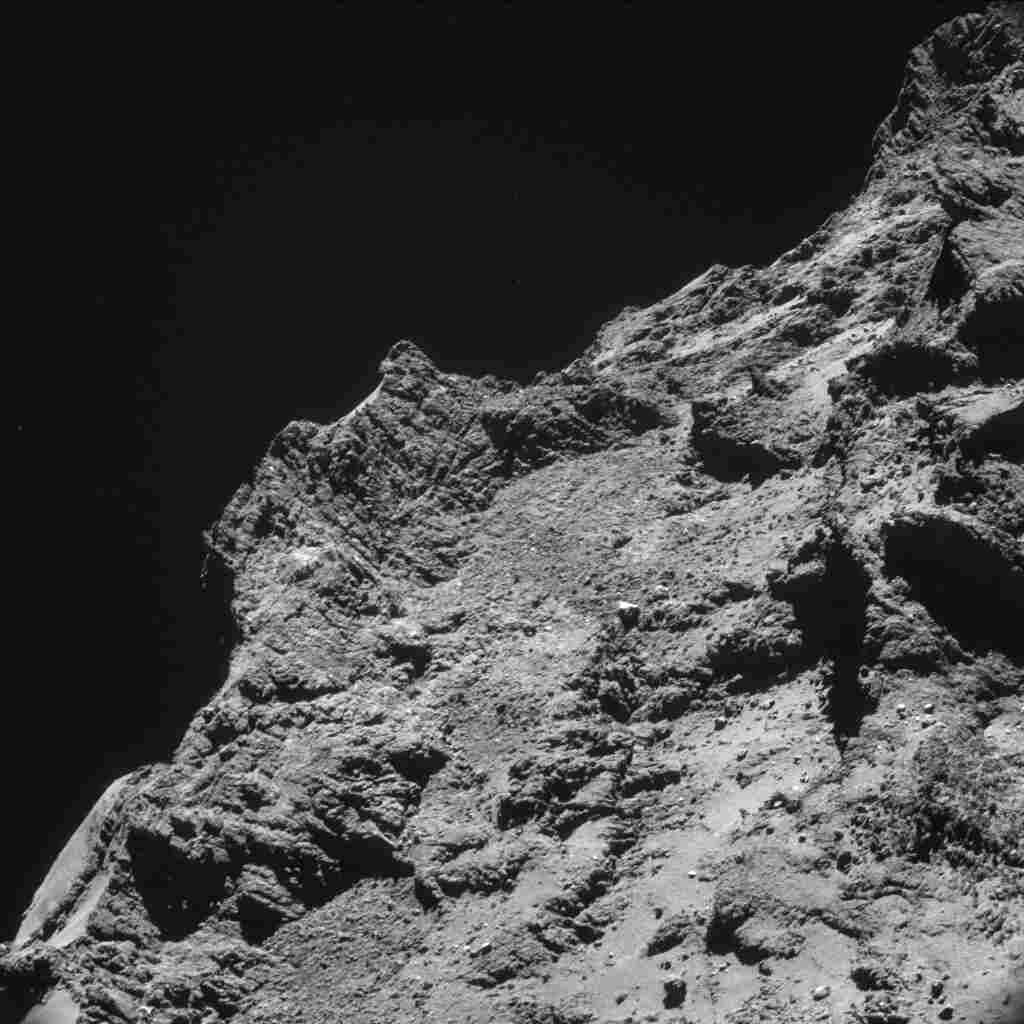 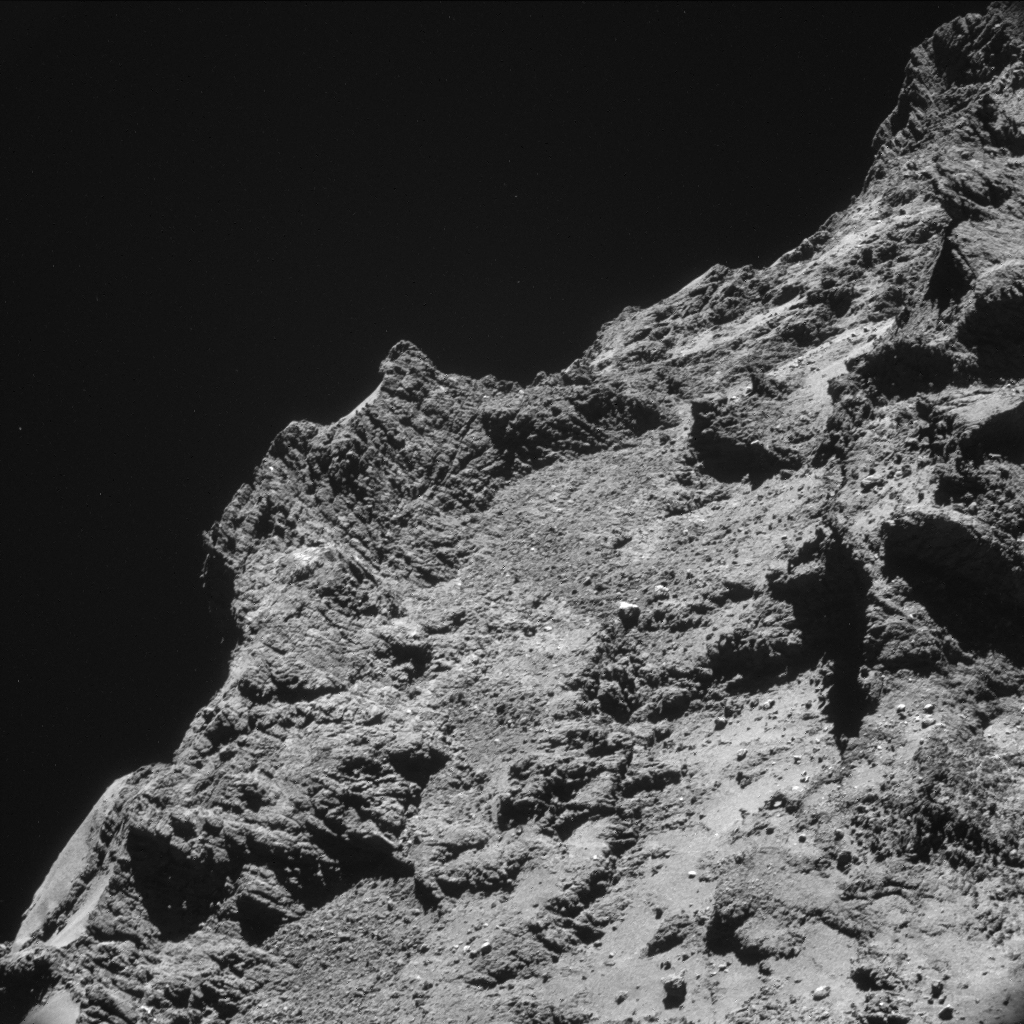 Newly released images taken from just 6 miles above the comet show high plateaus sticking up from its boulder-strewn surface.

A handful of missions had skimmed past Halley's comet in the 1980s, and in 2005, a NASA spacecraft had slammed into a comet at high speed. "But they didn't give very much indication on what's really [at] the surface of a comet," Ulamec says.

The comet they are aiming for was even more of a mystery back then. Known as 67P/Churyumov-Gerasimenko, its orbit is far from Earth. Even the most powerful telescopes can't make it out clearly from here.

How wrong that turned out to be. New images released today show the Mount Fuji-size comet isn't some gently lumpy blob.

Philae can't steer around those craggy peaks. It takes 28 minutes for commands from Earth to reach the comet, making it impossible for controllers on the ground to guide it as it descends. Philae could have tried to adjust its own descent, but the technology for a sophisticated autopilot landing was not available 20 years ago, when the probe was being built.

Instead the lander is designed to eject from the spacecraft and simply fall toward the comet until it touches down. "It is like throwing a stone at a target," says Hermann Boehnhardt of the Max Planck School for Solar System Science.

The descent will be slow and gentle. The lander weighs 220 pounds here on Earth, but under the pull of the comet's gravity it weighs little more than a sheet of paper. Its seven hours of free fall toward the comet will accelerate it to about walking speed. 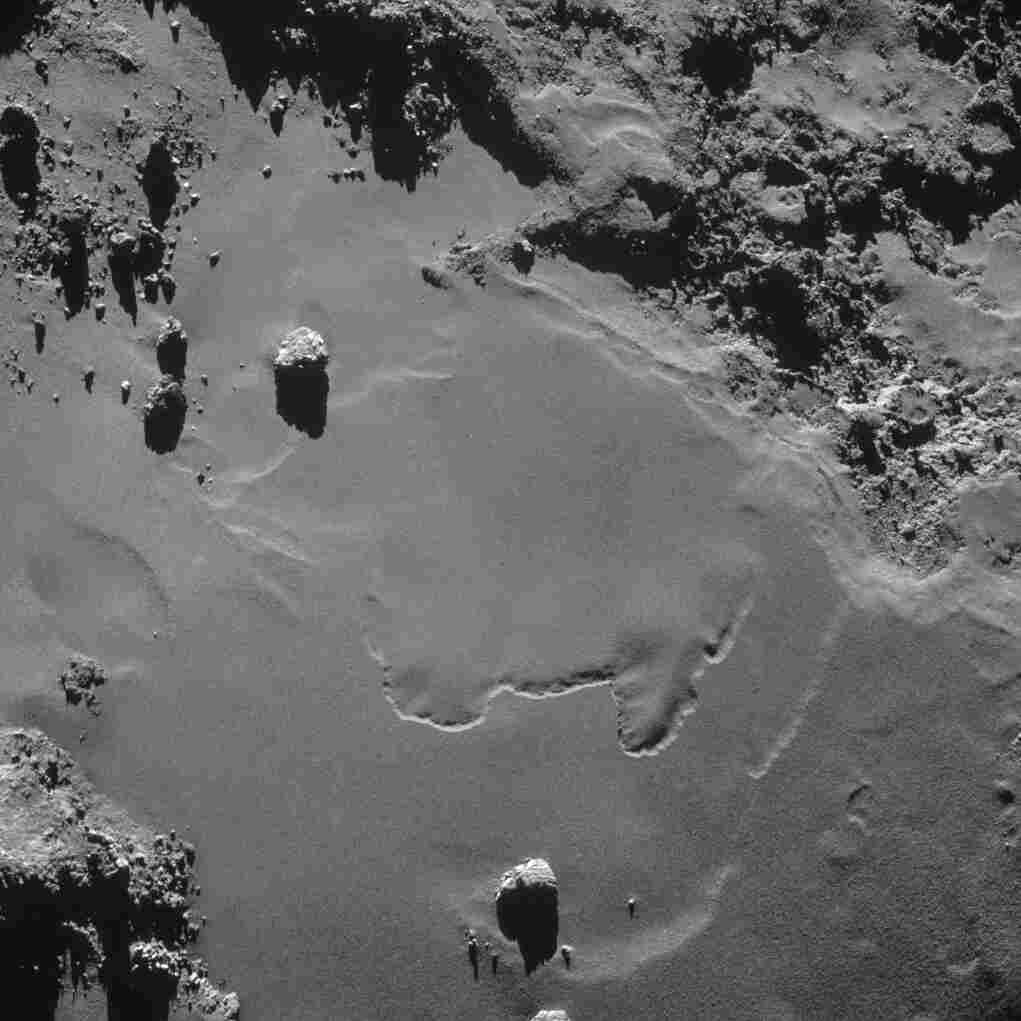 Boulders are strewn across even the flattest areas of the comet. The largest ones in this picture are the size of buildings. ESA/Rosetta/NAVCAM hide caption 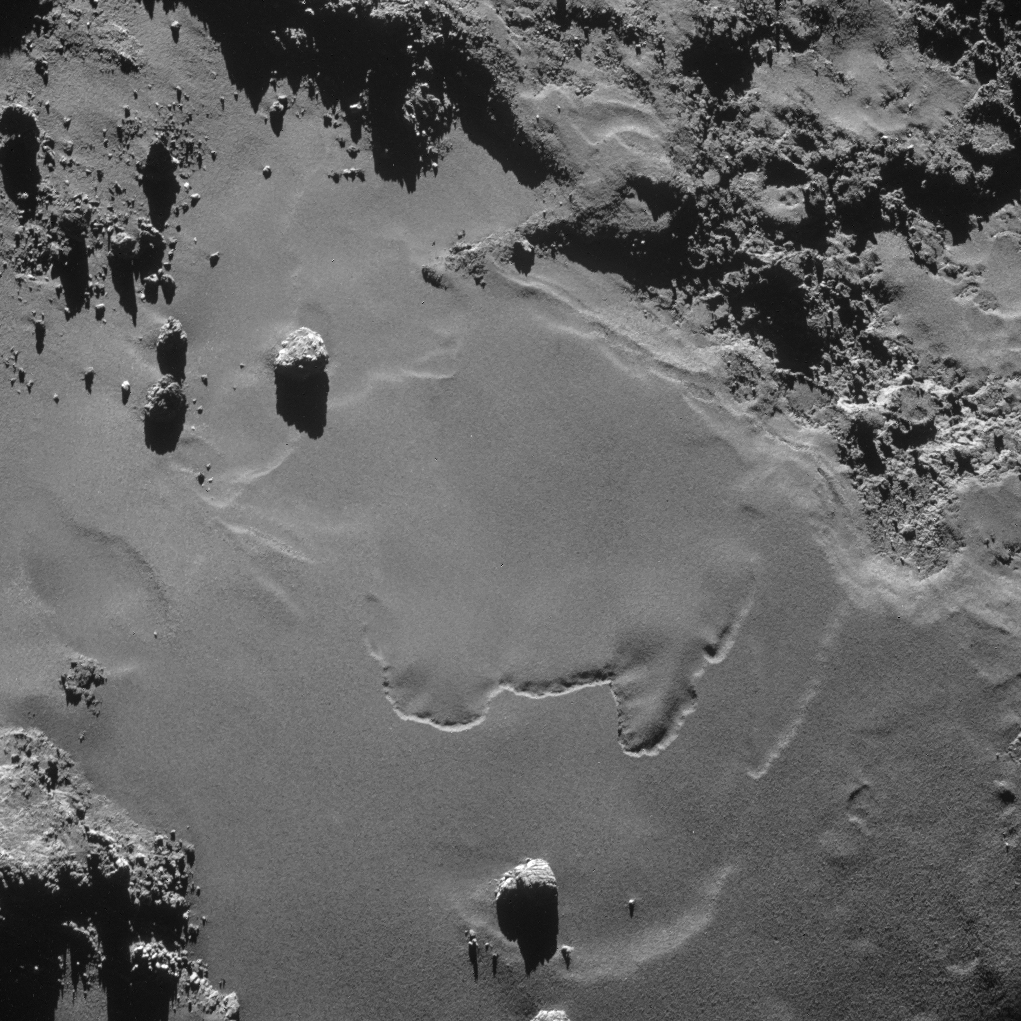 Boulders are strewn across even the flattest areas of the comet. The largest ones in this picture are the size of buildings.

Scientists have chosen a 1-square-kilometer landing zone on the lobe of the comet that is smoother than the rest. Except for the boulders.

"We cannot roll the boulders away before we land, so we just have to accept that they exist there," says Boehnhardt. "And we have to land in their neighborhood."

If Philae does strike a boulder, it may be game over. Toppling onto its side will make it impossible for its solar panels to generate electricity. It could also fall off a cliff. (There are a few in the landing area, Boehnhardt says.)

But if it lands in a clear zone, then it will try its best to latch onto the comet. First, thrusters will push it into the comet's surface. Then the lander will fire two harpoons in an attempt to tether it. Finally, ice screws in the feet will try to gain traction.

Will it work? "We don't know, really,'" Boehnhardt says. "We need quite a bit of luck [to have] a successful landing in the end." 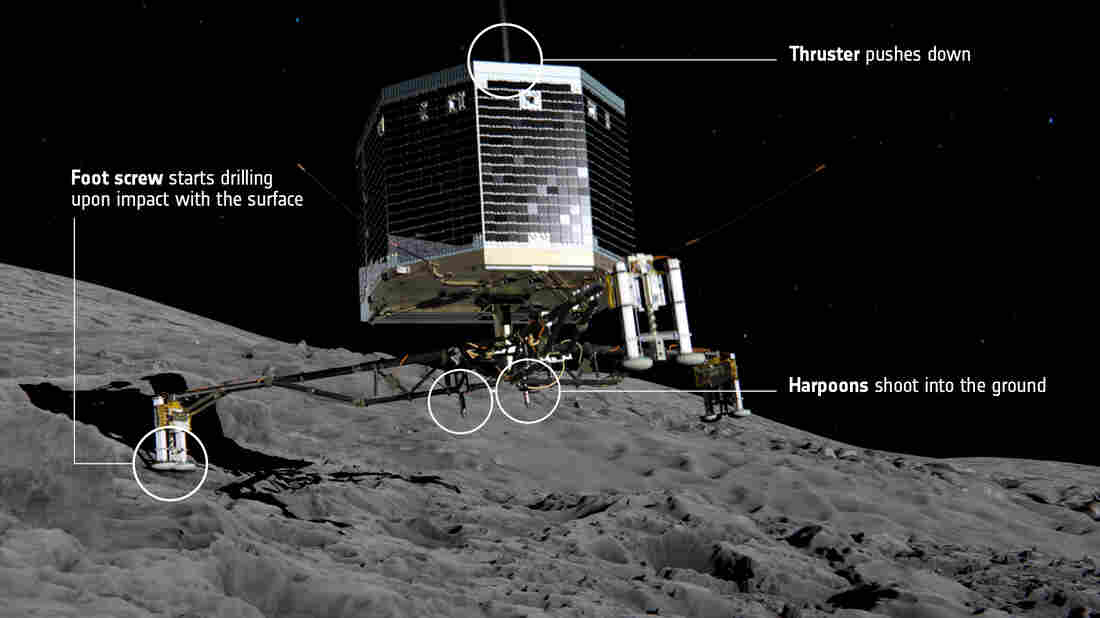 Thrusters, harpoons and screws will all be used to try to tether the Philae lander to the surface. ESA/ATG medialab hide caption 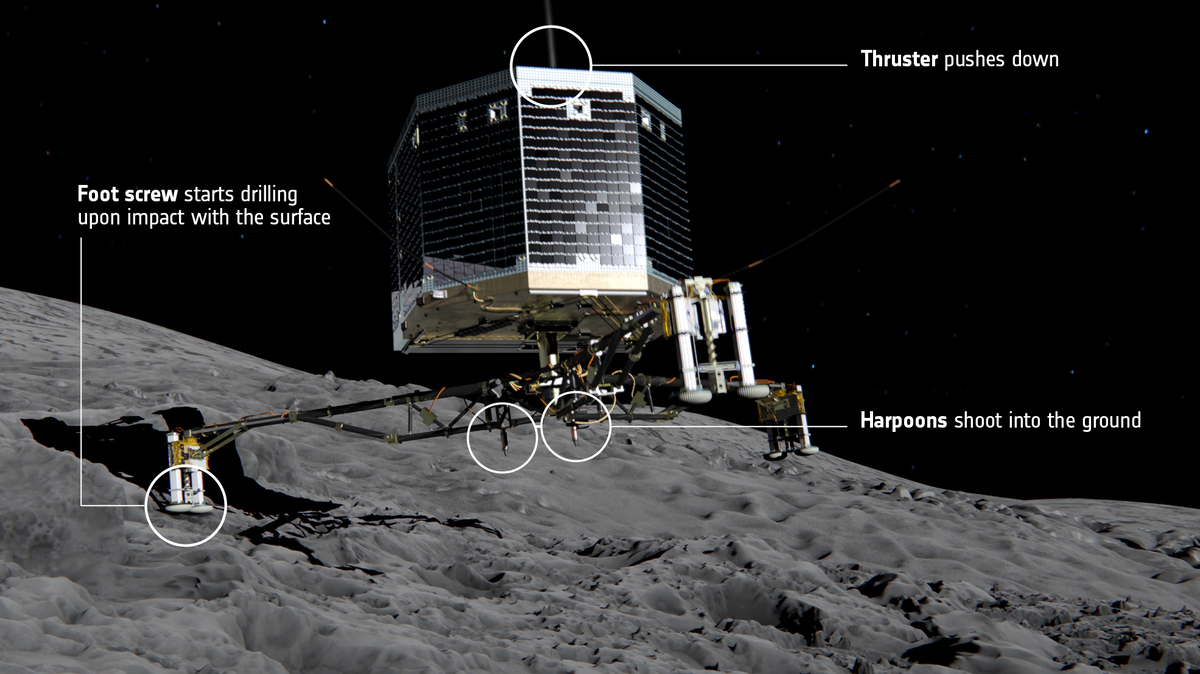 Thrusters, harpoons and screws will all be used to try to tether the Philae lander to the surface.