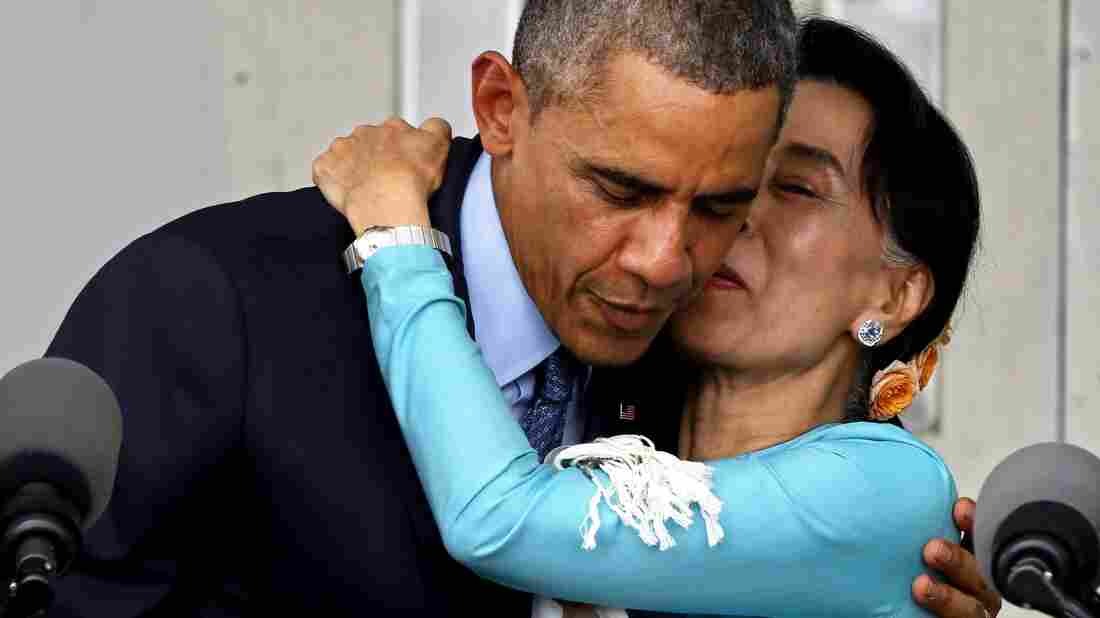 After meeting with Sein, Obama noted the recent progress toward peace and stability in the country also known as Burma.

"Domestically, we've seen political prisoners that have been released," he said. "We have seen an effort to end the practice of children being recruited into the army. There is a genuine prospect for a ceasefire between some of the armed groups that have been fighting in Myanmar for decades."

But Obama also said the U.S. is watching how Myanmar treats religious minorities. And he stressed the need for the country's 2015 elections to be transparent, fair and inclusive.

The election was a central theme at the president's news conference with Nobel Peace Prize winner Suu Kyi — a session held at her home, where she lived under house arrest for nearly two decades.

Suu Kyi is barred from running for president by a section of Myanmar's constitution that precludes anyone from taking the high office who is either married to or the parent of a foreign national. Both of Suu Kyi's sons are British citizens, as was her late husband.

"I don't understand a provision that would bar somebody from running for president because of who their children are," Obama said today.

"The majority of our people understand that this constitution cannot stand as it is if we want a make a true transition to democracy," she said. "It is not right to discriminate against one particular citizen."

The president also made a point of referring to Myanmar's Rohingya Muslim minority.

As The Associated Press reports, many Rohingya had been hoping Obama would mention them during his visit — in part because their own government denies their ethnicity's existence.

"Myanmar's government views the estimated 1.3 million Rohingya — living in dire, segregated conditions in western Rakhine state — not as citizens, but as illegal migrants from Bangladesh encroaching on scarce land. For that reason, they say the Rohingya ethnicity does not exist."

Today, Obama said, "Discrimination against the Rohingya or any other religious minority does not express the kind of country that Burma over the long term wants to be."

The U.S. president was also asked about domestic issues during the news conference, with questions ranging from the pending congressional votes on the Keystone XL pipeline to his plans for using executive orders to shift immigration enforcement.

After the president handled those questions, Suu Kyi said with a smile, "I am sorry the president can't get away from all those issues."