Accessibility links
Alabama Settlement Could Be Model For Handling Poor Defendants In Ferguson, Mo. : The Two-Way The city of Montgomery, Ala., was sued by a group of people who said they were jailed when they couldn't pay court fines and fees. Now the city has agreed to take steps to help those too poor to pay.

Alabama Settlement Could Be Model For Handling Poor Defendants In Ferguson, Mo.

Alabama Settlement Could Be Model For Handling Poor Defendants In Ferguson, Mo. 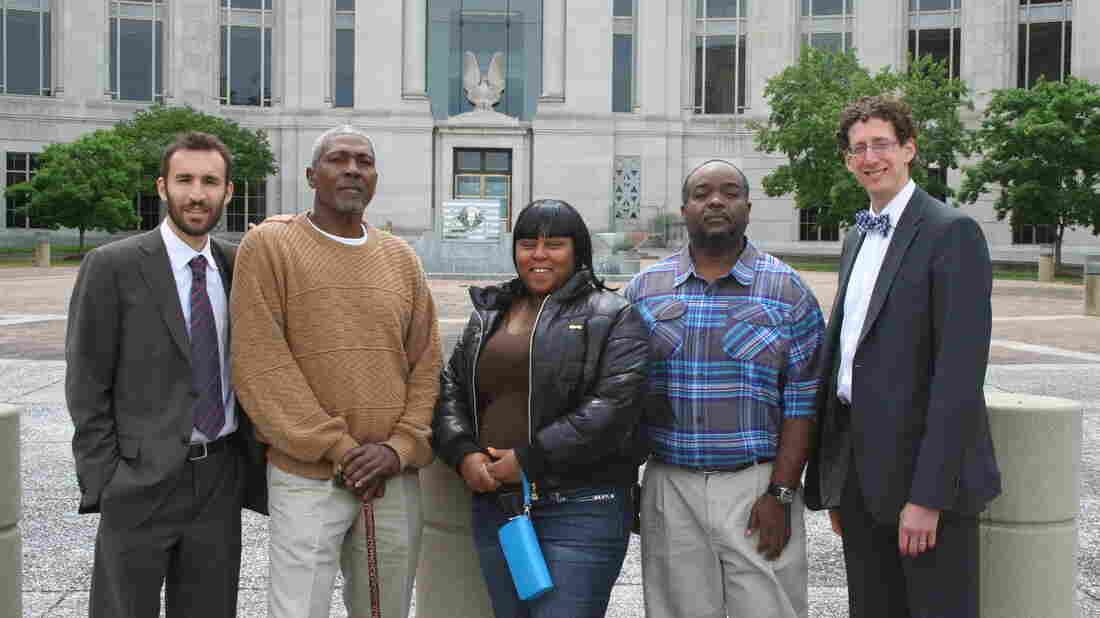 Sharnalle Mitchell (center) in Montgomery in May, after winning an injunction to stop the city from collecting court fines. With her (from left): attorney Alec Karakatsanis, fellow plaintiffs Lorenzo Brown and Tito Williams and attorney Matt Swerdlin. Courtesy of Alec Karakatsanis hide caption 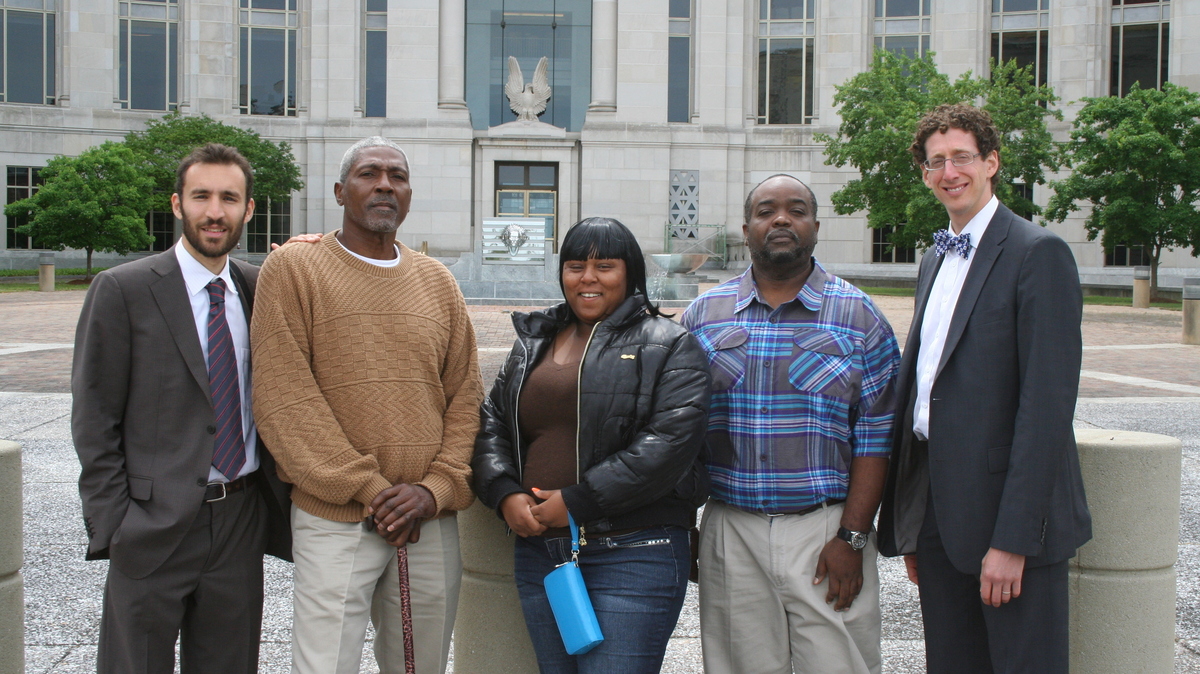 Sharnalle Mitchell (center) in Montgomery in May, after winning an injunction to stop the city from collecting court fines. With her (from left): attorney Alec Karakatsanis, fellow plaintiffs Lorenzo Brown and Tito Williams and attorney Matt Swerdlin.

There may be a model for court reform in Ferguson, Mo., in a legal settlement that happened quietly this week in Alabama.

The city of Montgomery agreed to new polices to avoid jailing people who say they are too poor to pay traffic tickets. In that Alabama city, as in Ferguson, there's been tension between poor residents and police over the way people are fined for traffic tickets and other minor violations and then sometimes jailed for not paying.

On Monday, a federal court judge approved a settlement between the city of Montgomery and plaintiffs who said they had been unlawfully jailed when they were unable to pay court fines and fees.

In the settlement, the city agreed to set a clear standard for municipal courts to determine whether someone is too poor to pay court fines and fees. There have been similar lawsuits elsewhere — a judge closed down the municipal courts of two small Alabama towns in 2012 and 2013 — but those cases are still being hashed out and Montgomery is the first city to complete court reform following a lawsuit.

In Montgomery, people with income at 125 percent of the federal poverty level, which amounts to less than $24,000 for a family of four, now will be considered indigent. They will be allowed to pay off tickets by performing community service or by paying fines at $25 a month.

Earlier this year, an NPR investigation, Guilty and Charged, found that all 50 states had added numerous fines and fees — for services from the cost of a public defender to renting a court-ordered electronic monitoring ankle bracelet — and that poor people struggle to pay costs that typically add up to hundreds or thousands of dollars.

The settlement also requires the city of Montgomery to stop using a private probation company that charged offenders extra fees to collect fines. And the courts have agreed to hold "amnesty days," when people can get arrest warrants lifted. A similar program of warrant forgiveness is being tested in Ferguson.

Sharnalle Mitchell was arrested Jan. 26 at her home in Montgomery for failure to pay traffic tickets from 2010. The single mother was handcuffed in front of her children, 1 and 4 years old, and sentenced to 58 days in jail to pay off unpaid fines. Mitchell, who also cared for her disabled mother, said she made a couple of small payments but fell behind because she had little income, less than $14,000 a year that she made from her occasional work styling hair.

In the crowded, dirty jail, she says, she was despondent. "I felt like I was going to lose my kids," she says. "I felt everything was just going down the drain."

She got out of jail early after an attorney from a small civil rights nonprofit found her in her cell. "She handed me the court documents that said either she had to sit in jail for 59 days or pay $2,800, money she didn't have," says Alec Karakatsanis of Equal Justice Under Law. She could pay off her debt at $50 a day, plus make an extra $25 on days she agreed to work as a janitor and clean the dirty jail cells. On the back of her court documents, she had listed the days from 1 to 58, with the amount of money she made each day, subtracted from $2,800.

Karakatsanis, who sued on behalf of 16 people, says the city violated constitutional protections that prevent people from going to jail simply because they are too poor to pay court fines. Debtors' prisons were outlawed in the U.S. before the Civil War. But the NPR investigation found there are no clear standards for how to determine who is too poor to pay — and should be excused — and those who have the ability to pay but simply refuse. As a result, the NPR series found, every day, poor Americans sit in jail because they can't pay off their court costs.

Robert Segall, an attorney representing Montgomery, denies the city acted improperly and says municipal court judges had made "a considerable effort to determine whether there was an ability to pay and put off imposing any kind of penalties for quite a long period of time" to give offenders multiple chances to pay what they owed. But in May, a federal judge, responding to the lawsuit, cited concerns and issued an injunction, stopping the city from collecting fines. Segall said the city negotiated with lawyers from Equal Justice Under Law and the Southern Poverty Law Center to avoid a lengthy court fight. He says the city welcomed the chance to institute clearer procedures.

There's been similar scrutiny of municipal courts in Ferguson, where arrests are a continuing source of tension. Last year, the municipal court in Ferguson, a city of 21,135 residents, issued 32,975 arrest warrants for nonviolent offenses, mostly driving violations.

The City Council has already proposed steps to reduce the arrest warrants. A ticket "amnesty" — extended through the end of the year — allows people to erase pending arrest warrants and reset what is owed in small payment plans. The city of St. Louis announced a similar step last month, saying it would forgive some 220,000 warrants for nonviolent traffic offenses. Other municipalities in St. Louis County are considering similar programs.

Montgomery, in the settlement this week, also agreed to offer amnesty days when people can seek to lift arrest warrants for failure to pay tickets.

Karakatsanis says the agreement in Montgomery could show a way to do court reform in Ferguson. "The settlement this week," he says, "has a chance to be a really groundbreaking moment in the fight against the rise of modern debtors' prisons."