Accessibility links
Snowed-Out Buffalo Bills To Play N.Y. Jets In Detroit : The Two-Way The Bills were to play at home on Sunday against the Jets. The NFL moved the game to Monday night after Buffalo got walloped by a snowstorm. The two teams will face off in Detroit. 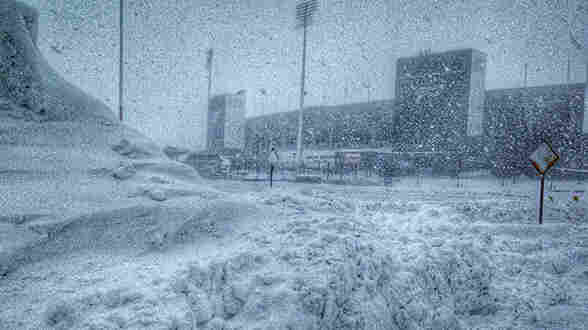 A massive amount of snow is keeping the Buffalo Bills from playing on Sunday at Ralph Wilson Stadium. The game with the New York Jets has been moved to Detroit, and they'll play Monday night. Buffalo Bills hide caption 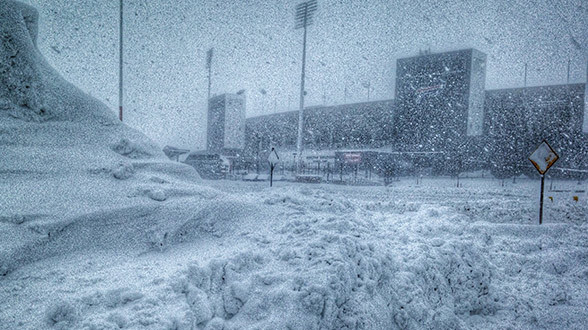 A massive amount of snow is keeping the Buffalo Bills from playing on Sunday at Ralph Wilson Stadium. The game with the New York Jets has been moved to Detroit, and they'll play Monday night.

Thanks to a massive snowstorm in western New York state, the National Football League has moved the Buffalo Bills' home game against the New York Jets this weekend to Detroit.

More than 5 feet of snow have fallen in some areas and even more had been expected by Friday.

Because of that, the NFL said the Bills will play the Jets on Monday night in Detroit. The game had been set for Sunday.

"We greatly appreciate the hospitality of the Detroit Lions in hosting the Bills and this game," said NFL spokesman Michael Signora.

The Lions are at New England on Sunday.

"This marks the second time the Bills will play at Ford Field this season following a 17-14 win over the Lions on Oct. 5. It also is the second time in four years the facility has hosted a neutral site game. The last time an NFL game was moved to Ford Field unexpectedly, the fans who did show up witnessed a bit of history. Brett Favre's streak of 297 regular-season starts came to an end that night — on Dec. 13, 2010 — when the Minnesota Vikings lost to the New York Giants 21-3. Favre was sidelined by shoulder and hand issues. That game was moved to Detroit because the Metrodome roof collapsed."

Members of the Bills' organization are expected to fly to Detroit on Friday — although getting everyone to the airport may be difficult considering travel restrictions and the amount of unplowed snow in some areas.

Snow and cold shouldn't be a problem for the regularly scheduled Monday night game, when the Baltimore Ravens meet the Saints in New Orleans — the benefits of a warmer climate and a dome stadium.