Accessibility links
Federal Court Halts Execution Of Mentally Ill Texas Prisoner : The Two-Way Scott Panetti was diagnosed with the beginnings of schizophrenia. During his trial, he defended himself dressed as a cowboy and insisted he was a character from a John Wayne movie. 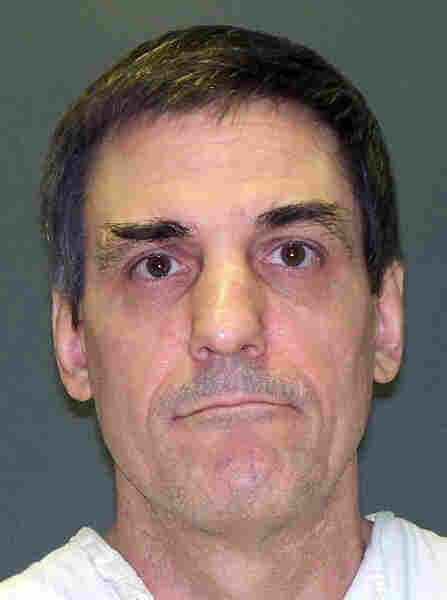 Texas death row inmate Scott Panetti has had a long history of mental illness but was allowed to defend himself at trial. He is scheduled to be executed next Wednesday. AP hide caption

A federal appeals court has halted the execution of Scott Panetti, a Texas prisoner convicted in the 1992 murder of his in-laws.

The 5th U.S. Circuit Court of Appeals granted a reprieve just hours before the 56-year-old inmate was scheduled to be killed via lethal injection. The court said it needed more time to "consider the late arriving and complex legal questions at issue in this matter."

The Associated Press reports Panetti's attorneys had argued that "mentally ill people cannot be executed if they don't have a factual and rational understanding of why they're being punished."

As NPR's Wade Godwyn has reported, there is no question that Panetti committed the crime and there is no doubt that he is mentally ill.

"But he was deemed fit to stand trial, and he was allowed to defend himself, dressing in a cowboy costume in court, insisting he was a character from a John Wayne movie," Wade reported.

Wade tells our Newscast unit that:

"Panetti was institutionalized more than a dozen times before he murdered his in-laws believing them to be directed by the devil. He was allowed to act at his own lawyer with farcical consequences at his trial. And it's been seven years since Panetti's had a psychological evaluation."

The legal issue surrounds a 2007 Supreme Court decision that a defendant "must have a rational understanding of the reasons for his imminent execution."

Texas argues that Panetti does; his lawyers argue otherwise.