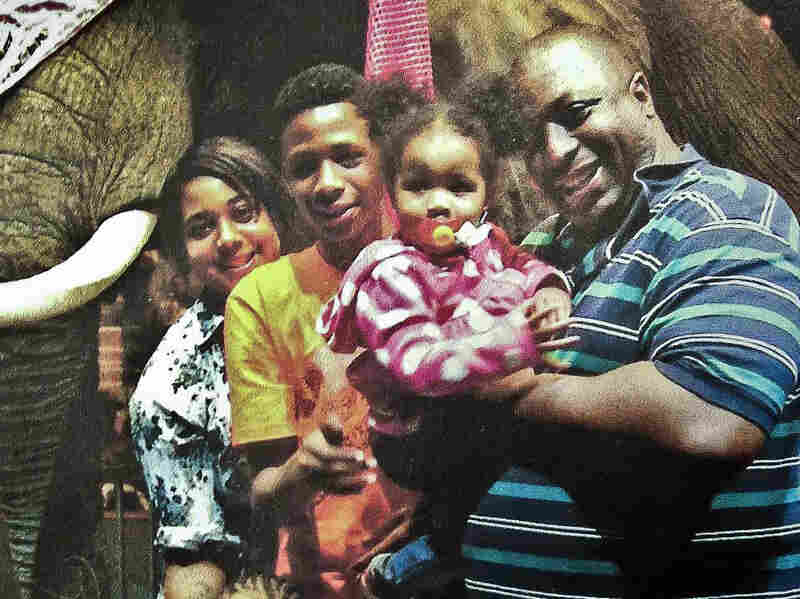 Eric Garner (right) poses with his children. A grand jury has decided not to indict a New York police officer over Garner's death in July. Family photo via National Action Network/AP hide caption 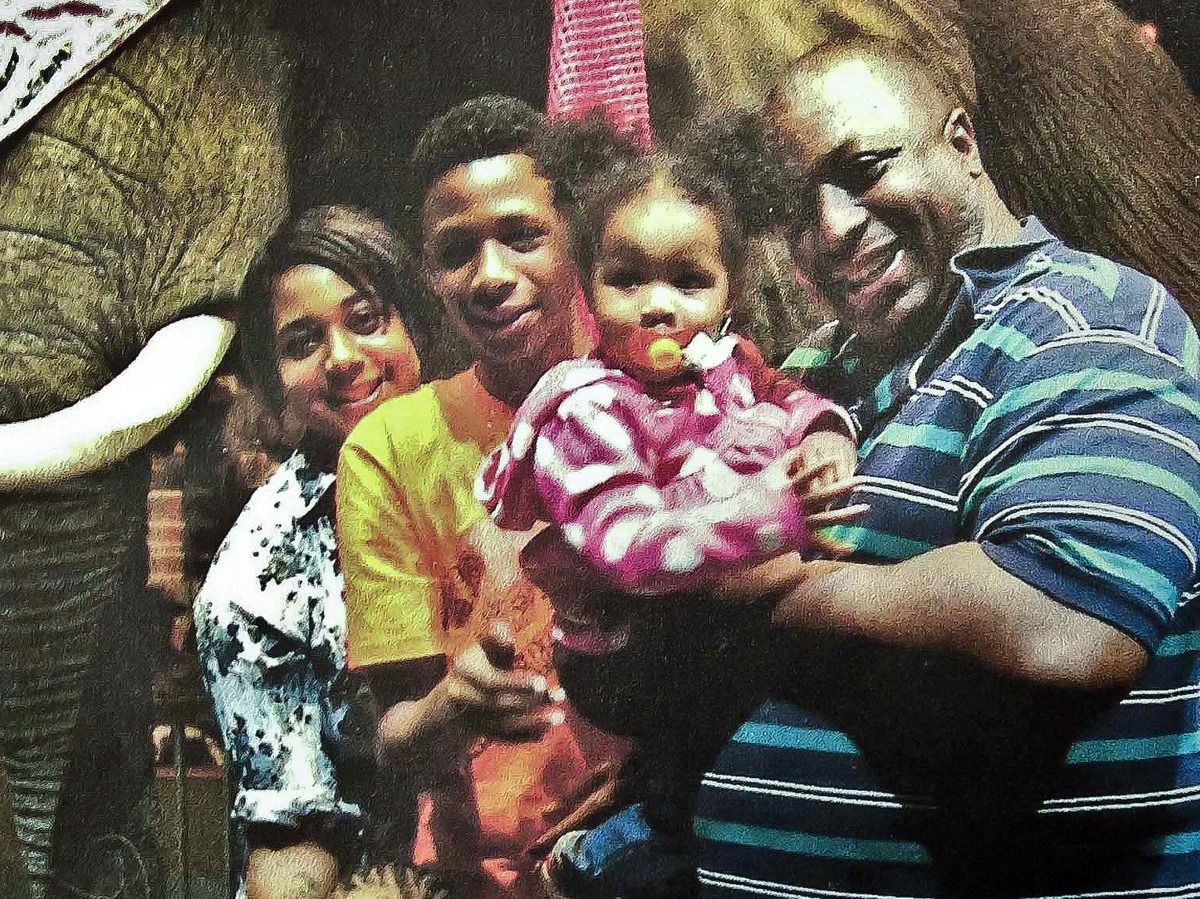 Eric Garner (right) poses with his children. A grand jury has decided not to indict a New York police officer over Garner's death in July.

A grand jury has decided not to indict a New York police officer in the death of Eric Garner on a Staten Island sidewalk this past July.

"It's a very painful day for so many New Yorkers," Mayor Bill de Blasio said Wednesday.

The encounter between Garner and officer Daniel Pantaleo caused an uproar after video footage of the incident was released. It showed Garner repeatedly gasping, "I can't breathe," as Pantaleo and other officers took him to the ground.

Shortly after the grand jury decision became public, a law enforcement source confirmed to NPR's Carrie Johnson that the U.S. Justice Department has opened a federal probe into Garner's death.

Garner, 43, died after being placed in a chokehold as he was being arrested for selling cigarettes on the sidewalk. He was apprehended by Pantaleo and several other officers.

His death was ruled a homicide by a New York medical examiner, who cited "compression of his chest and prone positioning during physical restraint by police."

Citing "centuries of racism that have brought us to this day," New York Mayor Bill de Blasio says that the fact that protesters have rallied around the statement "Black lives matter" reflects a sad situation, that such an idea needs to be both stated and repeated.

"It's a phrase that should never have to be said," the mayor said. "It should be self-evident."

De Blasio also said that after the grand jury's decision, other inquiries continue, including one by the New York Police Department. Saying that he had just spoken with Attorney General Eric Holder, de Blasio said the federal government is "clearly engaged and poised to act."

Across New York, de Blasio said, the call for "a city of fairness, [of people] who want violence to end" is coming from all of the city's residents, not only from members of its minority communities. 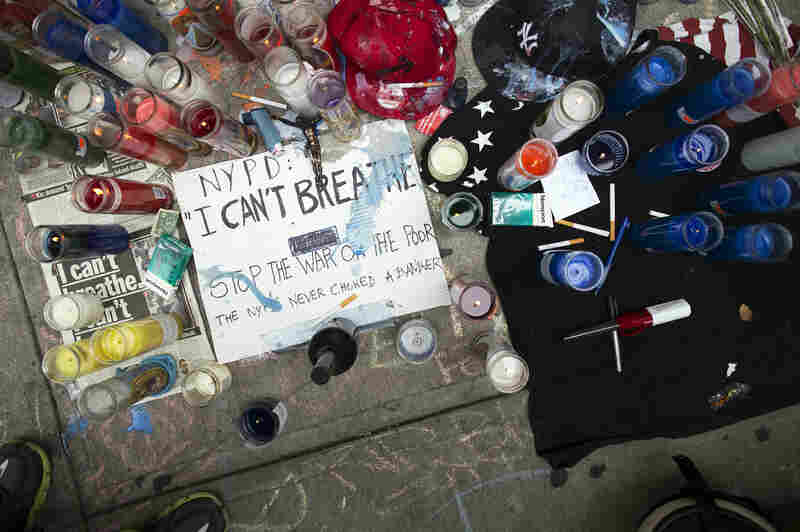 A memorial for Eric Garner rests on the pavement near the site of his death, on July 19, in Staten Island, N.Y. John Minchillo/AP hide caption 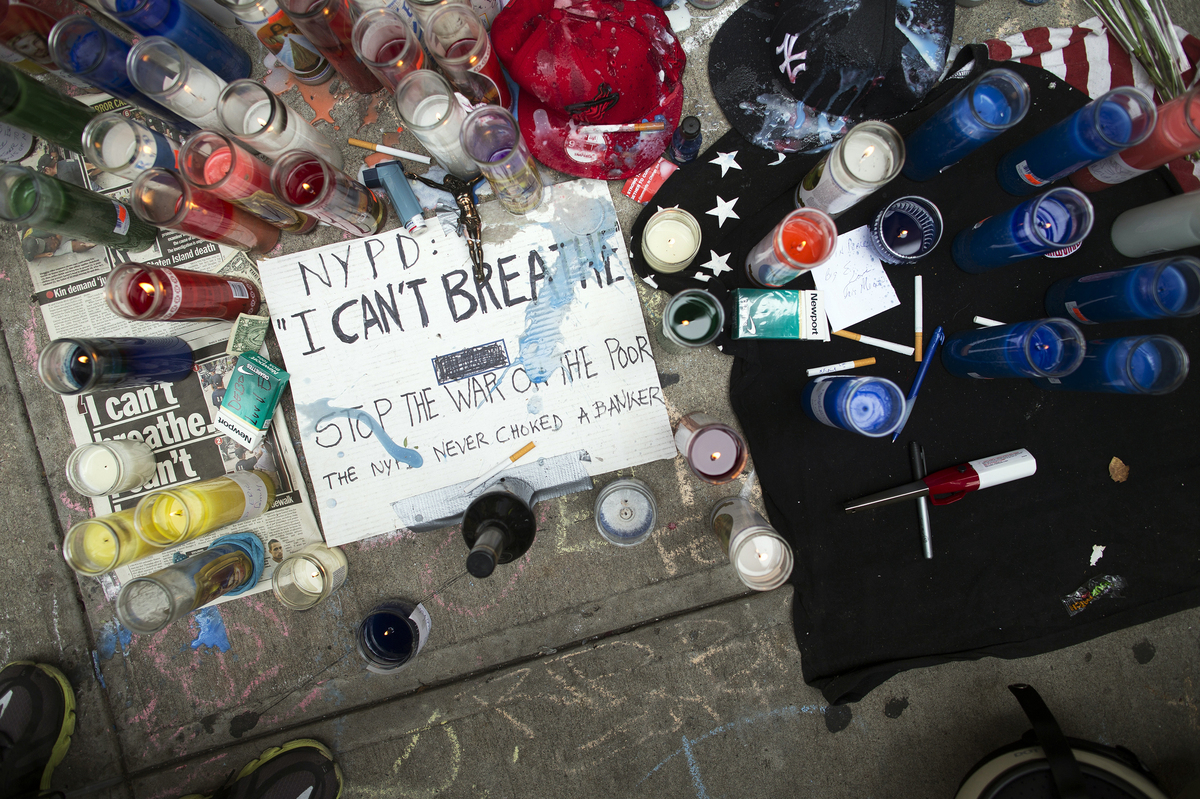 A memorial for Eric Garner rests on the pavement near the site of his death, on July 19, in Staten Island, N.Y.

"It's a very emotional day for our city. It's a very painful day for so many New Yorkers," Mayor Bill de Blasio said Wednesday. "We're grieving — again — over the loss of Eric Garner, who was a father, a husband, a son, a good man — a man who should be with us, and isn't."

Saying he had met with Ben Carr, Eric Garner's stepfather, de Blasio said he couldn't imagine what he's going through; the mayor mentioned his own son, Dante.

Earlier today, Carr was quoted as saying, "There is no justice system."

He added, "Who can control the police department? We had a damn videotape."

And as the mayor says, Garner also called for peaceful demonstrations.

Update at 5:15 p.m. ET: Protests May Include Tree Lighting

After the grand jury's decision came out, tonight's Rockefeller Christmas tree lighting was quickly named as a target for protesters to disrupt the event.

That plan was discussed on Twitter, revolving around the hashtag #ShutItDown. Others are also calling for a demonstration at Manhattan's Foley Square, to start at 5:30 p.m. ET Thursday.

Wednesday afternoon, demonstrators staged a "die-in" at Grand Central Station, with images from the scene showing dozens of people lying prone on the floor of the large station.

President Obama says the Eric Garner case "speaks to the larger issues that we've been talking about now for the last week, the last month, the last year — and sadly, for decades. And that is, the concern on the part of too many minority communities that law enforcement is not working with them and dealing with them in a fair way."

Obama noted that in the wake of the Ferguson, Mo., case, the Justice Department has formed a task force to help train police and law enforcement about the best ways to interact with communities of color and minority communities.

Obama spoke about the Garner case in a departure from his agenda during the White House Tribal Nations Conference at the Capital Hilton.

The president recounted what he said at recent meetings that were sparked by the Ferguson case: "This is an issue that we've been dealing with for too long, and it's time for us to make more progress than we've made. And I'm not interested in talk; I'm interested in action. And I'm absolutely committed as president of the United States to making sure that we have a country in which everybody believes in the core principle that we are equal under the law."

Obama noted that he had spoken with Attorney General Eric Holder, who will have more to say about the Garner case.

Saying that police officers have an important and hard job, Obama added that their work is made more difficult when they don't have the public's trust.

The president closed his remarks by saying forcefully, "When anybody in this country is not being treated equally under the law, that's a problem. And it's my job as president to help solve it."

Announcing the news conference Wednesday, the mayor's office added that he would no longer attend the Rockefeller Christmas tree lighting, which is scheduled for this evening (NBC is airing a TV special from 7 to 9 p.m. ET).

The tree lighting has been mentioned as a potential site for protests against Garner's death. Streets on at least four city blocks are closed for the ceremony.

Expressing condolences to Garner's family and gratitude to the jury, Richmond County District Attorney Daniel M. Donovan Jr. has released a statement about the panel's findings. He notes that "unlike other jurisdictions that have statutes that permit a district attorney to disclose specific details regarding what took place during a grand jury proceeding, New York law does not permit a district attorney to engage in such disclosure."

Donovan adds that grand jury information can only be shared in cases where "a compelling and particularized need for access" exists.

A court order seeking the authority to release information about the case "is under consideration," he says.

New York's Pix 11 passes along this statement from Officer Pantaleo:

"I became a police officer to help people and to protect those who can't protect themselves. It is never my intention to harm anyone and I feel very bad about the death of Mr. Garner. My family and I include him and his family in our prayers and I hope that they will accept my personal condolences for their loss."

Saying that the grand jury's decision is likely to cause disagreements and demonstrations, Staten Island Borough President James Oddo adds, "it is the obligation of all to do so while respecting the rule of law."

Oddo noted that earlier demonstrations were held without problems, proving that Staten Island residents "understand that peaceful protests make their point so much more powerfully than violent ones, which ultimately distract from their message and disrespect the memory of Eric Garner.

"We are one island, one borough and ultimately one family," he wrote. "Let's act accordingly."

The case sparked outrage in communities that saw it as another in a string of killings of unarmed black men at the hands of police. It also led to a broader debate about the use of force, particularly because the New York City Police Department has long banned the use of chokeholds to subdue suspects.

New York police officials have been preparing for the grand jury's decision to be released, in the hope that the city might avoid the chaos and clashes that have gripped Ferguson, Mo., in the wake of the police killing of Michael Brown, 18, in August.

"I'm not going to get out here and be violent. I hope nobody else does either, but I can't speak for anybody else. You know, everybody, they're up in arms about this 'cause the video was there for the world to see."

Along with the Brown case, Garner's death has brought new attention to how police do their job. As NPR's Gene Demby wrote in July:

"The Garner case is already rippling out into broader political conversations, like the value of the 'broken windows' strategy which targets low-level offenses that have made arrests climb in the city even as crime is near record lows. (Garner was initially approached by the police because he was suspected of selling untaxed cigarettes on the street.)"