Accessibility links
'Rolling Stone' Says Trust In Gang-Rape Accuser Was 'Misplaced' : The Two-Way The magazine reported last month on a University of Virginia student who said she was gang-raped during a fraternity party in 2012. It said today that there were "discrepancies" in its story. 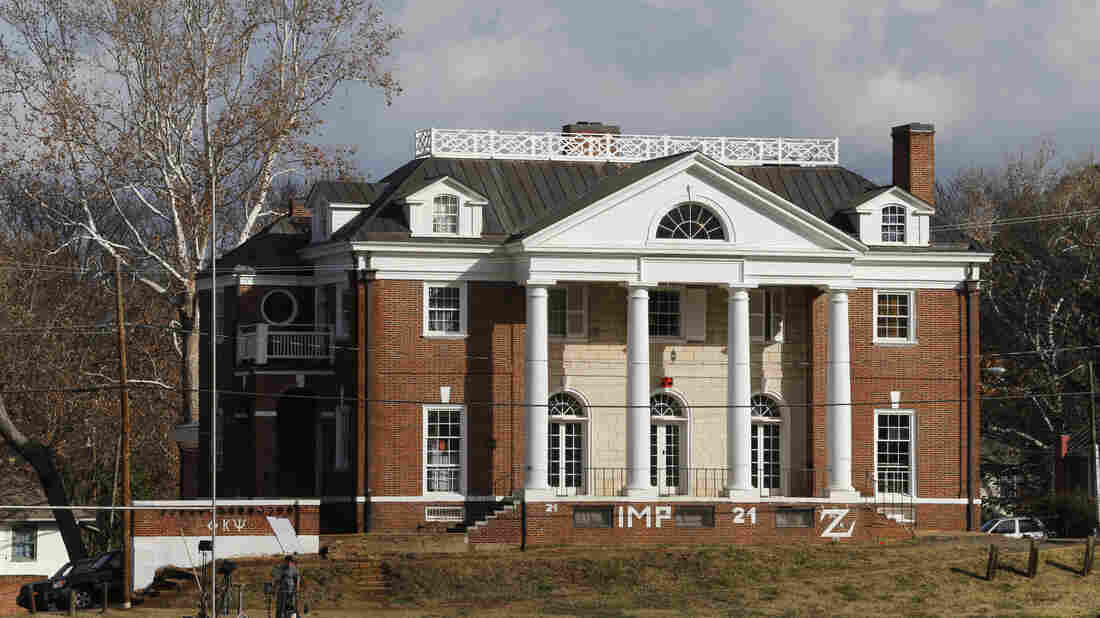 The Phi Kappa Psi fraternity house at the University of Virginia in Charlottesville, Va. The fraternity was at the center of gang-rape allegations published in Rolling Stone magazine. The magazine said Friday that there were "discrepancies" in its reporting. Steve Helber/AP hide caption 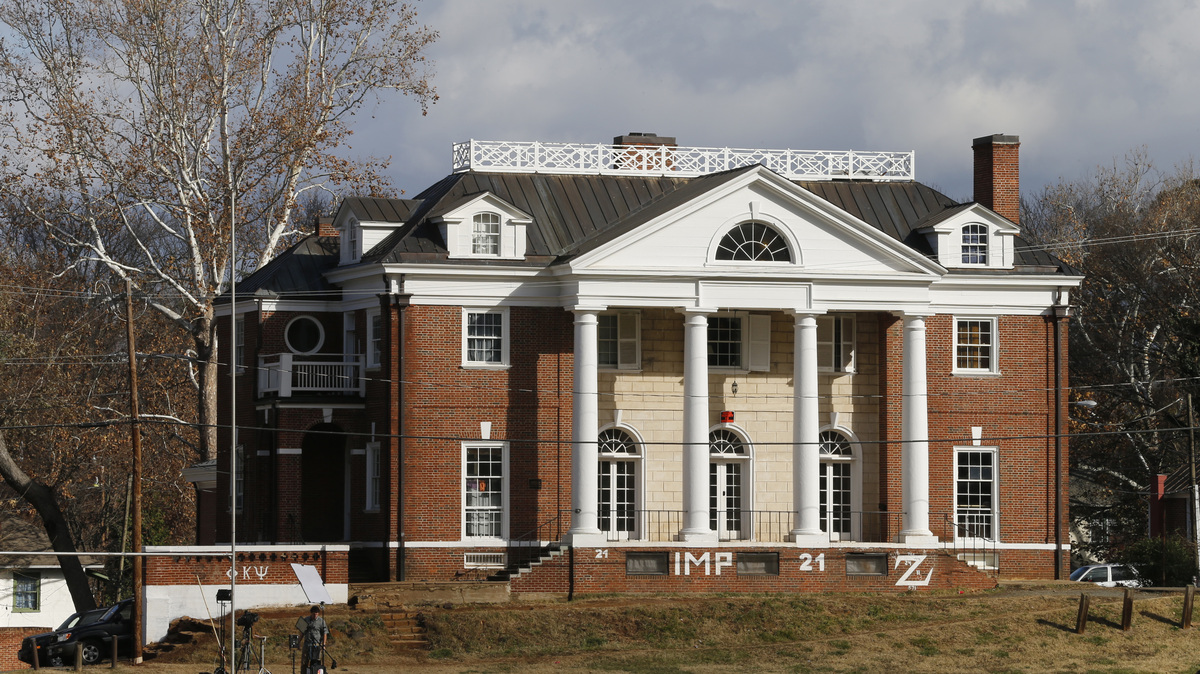 The Phi Kappa Psi fraternity house at the University of Virginia in Charlottesville, Va. The fraternity was at the center of gang-rape allegations published in Rolling Stone magazine. The magazine said Friday that there were "discrepancies" in its reporting.

Rolling Stone magazine says "there now appear to be discrepancies" in its story about a University of Virginia student who said she was gang-raped during a fraternity party in 2012, adding it had "come to the conclusion that our trust in her was misplaced."

The story identifies the woman who said she was raped only as "Jackie," and the magazine honored her request not to contact "Drew," the main accused who she said worked as a lifeguard, or any of the men she said took part in the attack.

"In the face of new information, there now appear to be discrepancies in Jackie's account, and we have come to the conclusion that our trust in her was misplaced," Managing Editor Will Dana said in a statement about the story by Sabrina Rubin Erdely. "We were trying to be sensitive to the unfair shame and humiliation many women feel after a sexual assault and now regret the decision to not contact the alleged assaulters to get their account. We are taking this seriously and apologize to anyone who was affected by the story."

Dana's note has been appended to the original article on the magazine's website.

Dana later tweeted he believed the failure was the magazine's and not Jackie's. Here is his full statement:

Virginia Attorney General Mark Herring called "deeply troubling" the magazine's "walking away from its central storyline in its bombshell report on the University of Virginia without correcting what errors its editors believe were made."

"Virginians are now left grasping for the truth, but we must not let that undermine our support for survivors of sexual assault or the momentum for solutions," he said in a statement.

Erdely's Nov. 19 article centered on the Phi Kappa Psi fraternity and Jackie's alleged rape when she was a college freshman. As we previously reported:

"In the article, a student named Jackie describes how her initial excitement of being invited to a party at the fraternity was suddenly replaced by fear and violence, as a group of men trapped her in a room and attacked her.

"The article says Jackie was pressured by peers to keep her story quiet, and that administrators who knew about Jackie's story took no action — even after she reported allegations from two other girls who said they had been assaulted in a similar way at the same fraternity."

The article and the ensuing outrage prompted University of Virginia President Teresa A. Sullivan to suspend all of the school's fraternities until Jan. 9. The university also apologized to the student who made the allegations.

Phi Kappa Psi released a statement today rebutting the claims in the article. It said none of its members worked at the aquatic center where the article said "Drew" was a lifeguard; and it said the fraternity's chapter did not have a social event or date function on the weekend of Sept. 28, 2012, when the assault is alleged to have occurred. And, it added, the chapter's pledging and initiation periods occur only in the spring — not in the fall semester.

"We document the initiation of new members at the end of each spring," the statement said. "Moreover, no ritualized sexual assault is part of our pledging or initiation process. This notion is vile, and we vehemently refute this claim."

Sullivan, in a statement today, acknowledged that the university is aware of the discrepancies in the story that have come to light. Nonetheless, she said, sexual violence on college campuses remains a problem and she called for maintaining a commitment to end it.

The Rolling Stone article prompted outrage at Phi Kappa Psi and other fraternities, but it also drew skepticism from several people who questioned the facts in the story. The Washington Post reported today that several of Jackie's close friends had come to doubt her account. Jackie told the newspaper that she was standing by her version of the events.

"I never asked for this" attention, she told the Post. "What bothers me is that so many people act like it didn't happen. It's my life. I have had to live with the fact that it happened every day for the last two years."