Accessibility links
Report Says CIA Misled Congress, White House On Interrogation Program : The Two-Way The report is the most comprehensive account of interrogation techniques used by the CIA after the attacks of Sept. 11, 2001. The report found the techniques provided no useful intelligence. 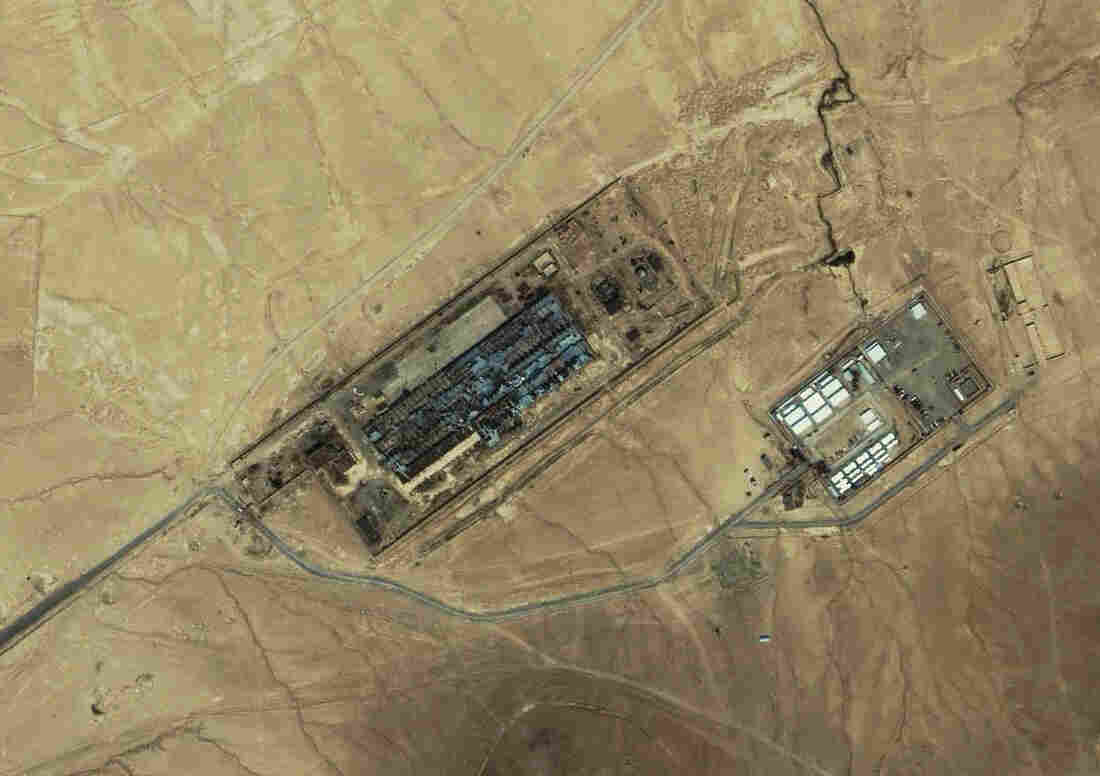 An IKONOS satellite image of a facility near Kabul, Afghanistan, on July 17, 2003, shows what is reportedly the largest CIA covert prison in Afghanistan, code-named the Salt Pit. Reuters/Landov hide caption 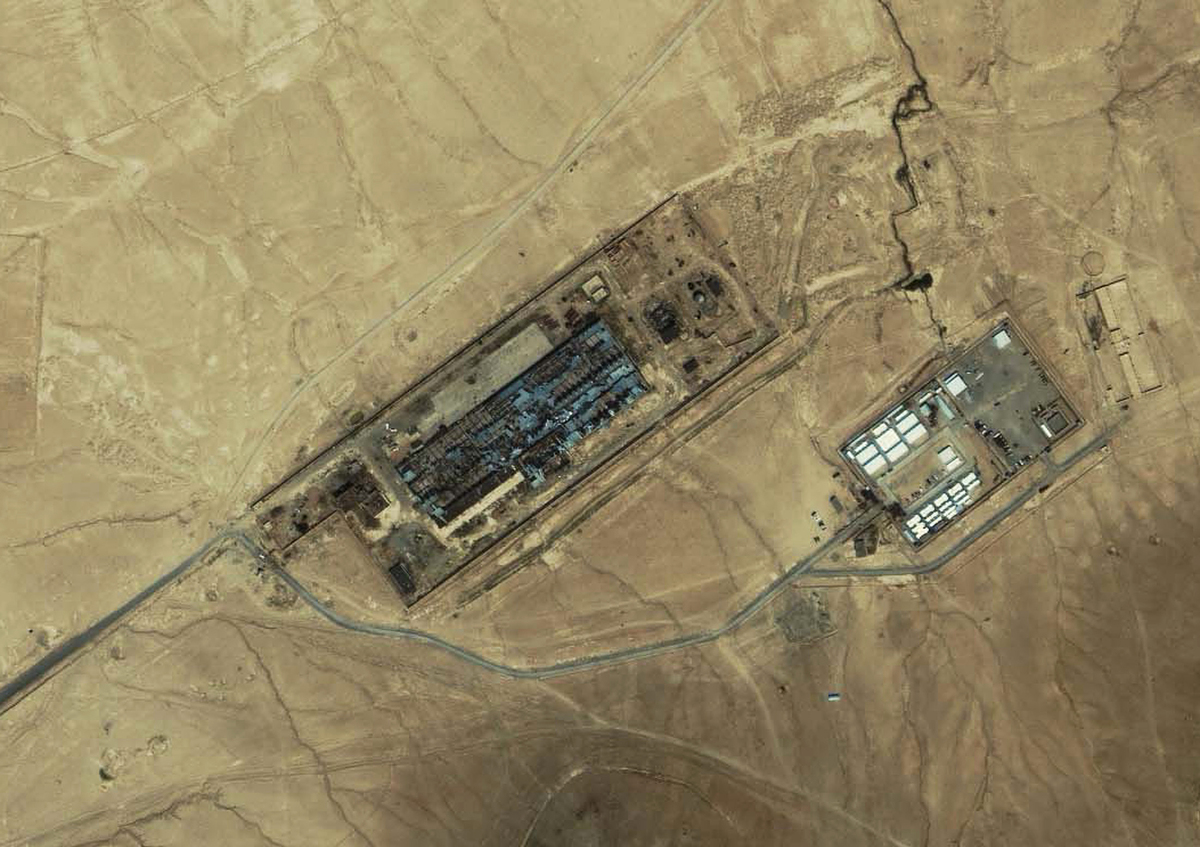 An IKONOS satellite image of a facility near Kabul, Afghanistan, on July 17, 2003, shows what is reportedly the largest CIA covert prison in Afghanistan, code-named the Salt Pit.

The CIA "provided inaccurate information to the White House, Congress, the Justice Department, the CIA inspector general, the media and the American public" about the "brutal" interrogation techniques it used on terrorism suspects, a long-held Senate intelligence committee report finds.

The report provides the most comprehensive public accounting of the interrogation techniques used by the Central Intelligence Agency after the terrorist attacks of Sept. 11, 2001.

It looked at more than 6 million pages of CIA material over the course of more than three years, and it came to two major conclusions: The CIA misrepresented the interrogation techniques it was using at secret prisons abroad, and it also overstated the techniques' efficacy. The report details the techniques used on detainees and found that those interrogations led to no useful intelligence.

The report does not use the word torture, and it doesn't weigh the legality of the program. But Sen. Dianne Feinstein, the Democratic chairwoman of the intelligence committee, writes in the report that it is her "personal conclusion that, under any common meaning of the term, CIA detainees were tortured."

The CIA rejects those criticisms, saying the Senate report is wrong.

In a statement, Director John Brennan admitted to some "shortcomings" and said the CIA had implemented some "remedial measures."

"Our review indicates that interrogations of detainees on whom EITs were used did produce intelligence that helped thwart attack plans, capture terrorists and save lives," Brennan said. "The intelligence gained from the program was critical to our understanding of al-Qaida and continues to inform our counterterrorism efforts to this day."

What's in it is so sensitive and controversial that the report's release has sparked public spats between the CIA and Senate lawmakers.

It all came to a dramatic head on the floor of the Senate in March. Feinstein accused the CIA of trying to thwart her committee's work by deleting files and later by illegally spying on Senate computers. The CIA — which eventually apologized to the Senate — had accused Feinstein and her committee of improperly removing classified documents from a government network.

Today, the Senate made public a 500-page executive summary of the report, which still remains classified.

Announcing its release, Feinstein said the report found a program that is a "stain on our values and our history." But she said it is important to release this report because it will show the world that "America is big enough to admit when it is wrong."

The release of this report is important, she said, because the U.S. needs to "face an ugly truth and say never again."

We'll use this space to post the document and share what we learn as we learn it. To see the latest, refresh this page.

"We may have made a few terrorists uncomfortable for a short period of time in order to get information that we felt was essential to protecting the United States," he said.

You can listen to the full interview on All Things Considered.

They say this report is critically flawed. Specifically, they say the CIA's enhanced interrogation techniques led to important intelligence and helped in the hunt for Osama bin Laden.

"There is no doubt that information provided by the totality of detainees in CIA custody, those who were subjected to interrogation and those who were not, was essential to bringing bin Laden to justice. The CIA never would have focused on the individual who turned out to be bin Laden's personal courier without the detention and interrogation program.

"Specifically, information developed in the interrogation program piqued the CIA's interest in the courier, placing him at the top of the list of leads to bin Laden. A detainee subjected to interrogation provided the most specific information on the courier. Additionally, KSM and Abu Faraj al-Libi—both subjected to interrogation—lied about the courier at a time when both were providing honest answers to a large number of other critical questions. Since other detainees had already linked the courier to KSM and Abu Faraj, their dissembling about him had great significance.

"So the bottom line is this: The interrogation program formed an essential part of the foundation from which the CIA and the U.S. military mounted the bin Laden operation."

The committee's Republican minorities view the report as flawed, saying it is biased and does not take into account the context in which these programs were formed, and because the committee did not talk to key witnesses.

Here's a small excerpt from their report (pdf):

"With respect to the standard of objectivity, we were disappointed to find that the updated Study still contains evidence of strongly held biases. John Brennan emphasized this point prior to his confirmation as the Director of the CIA, when he told Vice Chairman Chambliss that, based on his reading of the originally approved Executive Summary and the Findings and Conclusions, the Study was 'not objective' and was a 'prosecutor's brief,' written with an eye toward finding problems.

"We agree with Director Brennan's assessments. We also agree with the criticism he relayed from Intelligence Community officials that it was written with a 'bent on the part of the authors' with 'political motivations.'"

The report does not use the word torture and it doesn't weigh the legality of the program.

But Sen. Dianne Feinstein, the chairwoman of the Senate intelligence committee, writes in the report that it is her "personal conclusion that, under any common meaning of the term, CIA detainees were tortured."

In a statement, President Obama said his predecessors were making decisions after an unprecedented attack on the United States. The U.S., he said, did many things right.

But what this committee finds today is "contrary to our values."

"Moreover, these techniques did significant damage to America's standing in the world and made it harder to pursue our interests with allies and partners," Obama said. "That is why I will continue to use my authority as President to make sure we never resort to those methods again."

A Justice Department official says they will bring no new charges in response to the report.

"Those investigators have reviewed the committee's full report and did not find any new information that they had not previously considered in reaching their determination," the official said.

In a statement, Director John Brennan admitted to some "shortcomings" and said the CIA had implemented some "remedial measures."

He said that while the CIA agrees with some of the committee's findings, it diverges with the committee's two main findings: The CIA says the program was effective and it did not mislead other parts of the government about its enhanced interrogations.

"Our review indicates that interrogations of detainees on whom EITs were used did produce intelligence that helped thwart attack plans, capture terrorists, and save lives," Brennan said. "The intelligence gained from the program was critical to our understanding of al-Qaida and continues to inform our counterterrorism efforts to this day."

The report itself does not conclude whether these techniques were legal. The report also doesn't use the word torture. But here are some of the techniques described. Fair warning — some are disturbing:

— At a site called COBALT, CIA officers strayed from the techniques approved by the White House. In November 2002, a detainee died from hypothermia after he was held "partially nude and chained to a concrete floor."

— Some detainees were kept awake for up to 180 hours, "usually standing or in painful stress positions, at times with their hands shackled above their heads."

— The CIA told several detainees that they would not leave custody alive. One was told he would only leave in a "coffin-shaped box."

— Some naked detainees were "hooded and dragged up and down corridors while being slapped and punched."

— "At least five CIA detainees were subjected to 'rectal feeding' or 'rectal hydration' without documented medical need," Feinstein's office says. We're not sure what that means.

— In many cases, the CIA misrepresented the efficacy and the techniques used on detainees. This line from Feinstein's office sums it up: "The CIA provided inaccurate information to the White House, Congress, the Justice Department, the CIA inspector general, the media and the American public."

— These interrogation techniques were not effective. The CIA, the report concludes, misled the rest of the government — including the president — on the efficacy of the program.

The Senate committee reviewed 20 cases the CIA held up as its most prominent successes. The committee found that in all of those cases, either the information attained had nothing to do with the success or it was acquired from the detainee before the harsh techniques were applied or the information was "already available to the intelligence communities from other sources."

We're expecting the Senate to issue its report around 11 a.m. ET. That gives you some time for some remedial reading. Here's what we recommend:

-- "CIA misled on interrogation program, Senate report says" (Washington Post): This is a report based on interviews with officials who have read the "torture report." According to the Post, the CIA misled the Bush administration and Congress on the extent and success of the interrogation techniques.

Here's a key quote: "The CIA described [its program] repeatedly both to the Department of Justice and eventually to Congress as getting unique, otherwise unobtainable intelligence that helped disrupt terrorist plots and save thousands of lives," one U.S. official briefed on the report told the Post. "Was that actually true? The answer is no."

-- "Bush and C.I.A. Ex-Officials Rebut Torture Report" (New York Times): Before the report's release, the Bush administration is staking out a position. Mostly, it appears they will not take the opportunity offered by the report to distance itself from the CIA.

In an interview with CNN, President George Bush made that clear: "We're fortunate to have men and women who work hard at the C.I.A. serving on our behalf," he said. "These are patriots and whatever the report says, if it diminishes their contributions to our country, it is way off base."

-- Sen. Feinstein Accuses CIA of Searching Congressional Computers (C-Span): Arguably the climax of this whole thing came back in March, when Feinstein delivered a more than 30-minute speech on the floor of the Senate.

In it, she accused the CIA of trying to thwart her committee's work by deleting files and spying on their computers.

The Senate torture report is set up as a series of case studies, looking at how dozens of detainees were treated by the United States. As we sift through the report, we'll be focused on answering five questions:

-- Did these interrogation methods yield any useful intelligence?

-- Was anyone held accountable?

-- Are interrogation methods that went beyond the methods approved by Bush administration lawyers described?

-- Did the CIA mislead the Bush administration about the extent or severity of the methods used?