Accessibility links
Protesters Rally In 'Justice For All' Marches In 3 Cities : The Two-Way Thousands marched in D.C. and New York and hundreds in Boston, spurred on by anger over the fatal police shootings of Michael Brown and Tamir Rice and the choking death of Eric Garner. 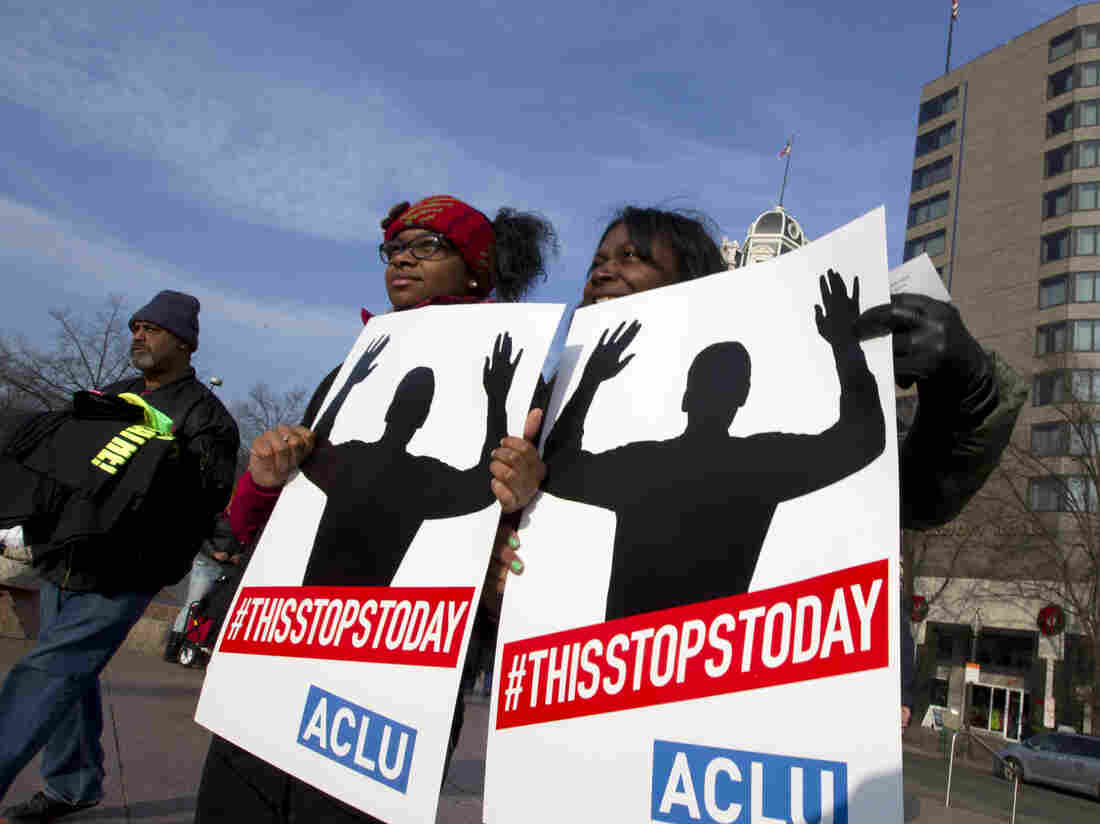 Melissa W. Green, right, and her daughter Reshae Green holds up their signs at Freedom Plaza during the "Justice for All" march and rally on Pennsylvania Avenue in Washington on Saturday. Jose Luis Magana/AP hide caption 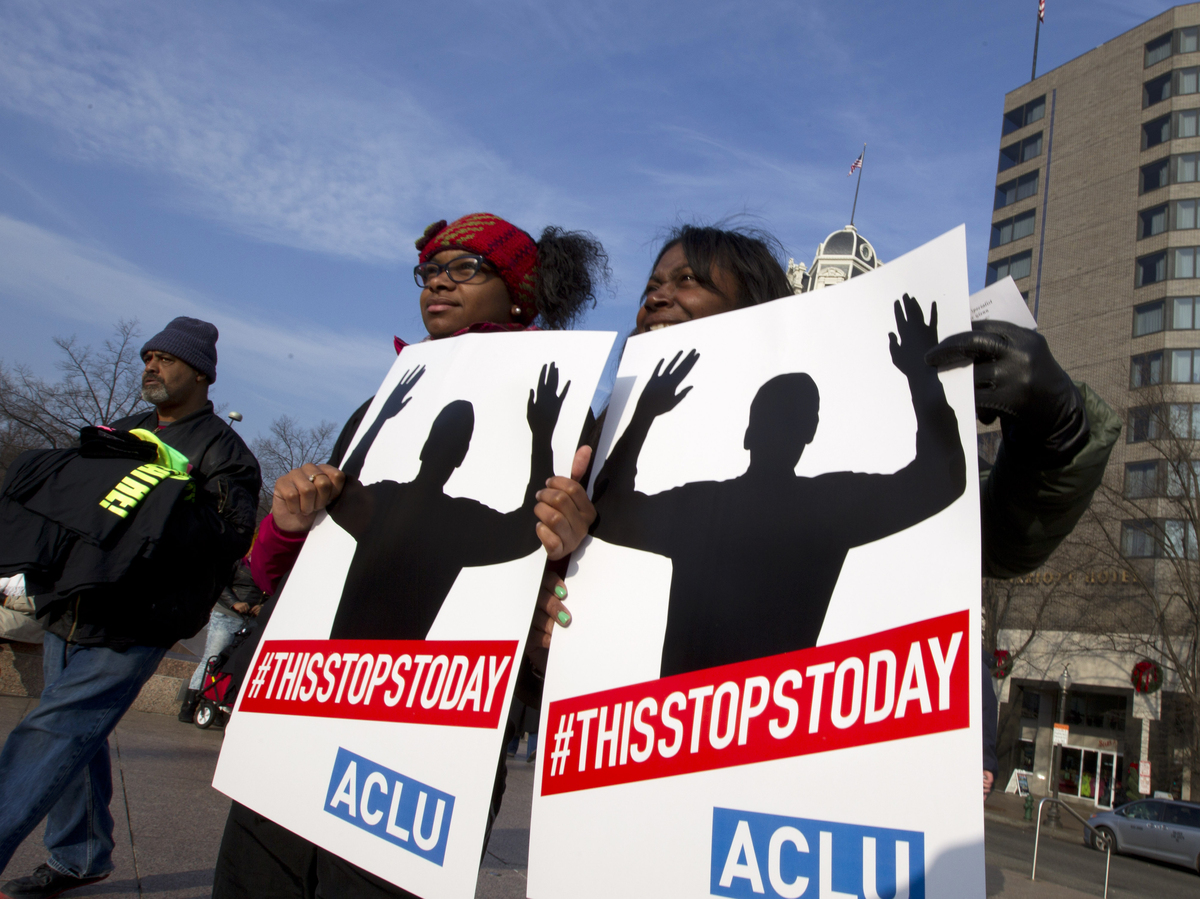 Melissa W. Green, right, and her daughter Reshae Green holds up their signs at Freedom Plaza during the "Justice for All" march and rally on Pennsylvania Avenue in Washington on Saturday.

Thousands of demonstrators gathered today for a "Justice for All" march in the nation's capital to protest decisions in Missouri and New York not to indict police officers involved in the deaths of two black men.

Meanwhile, similar numbers showed up for a rally in New York, according to Newsday and hundreds gathered in Boston, The Boston Globe reports.

The Rev. Al Sharpton's National Action Network, the NAACP and the National Urban League were to start at noon at Freedom Plaza and march to the U.S. Capitol, where they will hold a rally featuring the families of several African-Americans who were killed in confrontations with police.

"Members of Congress, beware we're serious," Sharpton said. "When you get a ring ding on Christmas, it might not be Santa. It may be Rev. Al coming to your house."

Gwen Carr, the mother of Eric Garner, who died in New York in July after being subjected to a police chokehold that was captured on video, said the march was making history.

"You know our son's not here in body, but he's here with each and every one of you," she said.

Dante Gabourel, 20, a native of Chicago who is attending Emory University in Atlanta, was among those gathered early for the march.

"My generation has reached either a tipping point or a breaking point," Gabovuel told NPR's Eleanor Klibanoff. "The violence has become very visible."

He said now racism is "bubbling back to the surface where you have basically public lynchings on video with no repercussions.

"We are not going to take this anymore," he said.

The shooting death of Michael Brown in Ferguson, Mo., the choking death of Eric Garner by police officers in New York and the fatal police shooting of 12-year-old Tamir Rice in Cleveland in recent months have fueled anger among people who see different police standards for how suspects are treated, according to their race.

"I am the mother of three sons, grandmother of one grandson, who are black men. I would not like to see anything happen to them," Gina Russell Stevens of Brooklyn, New York, tells NPR's Hansi Lo Wang.

"I think this is a seminal moment for this generation who are younger than myself," she says. "I haven't seen this much activism for a worthy cause for a very long time."

"[P]articipants include clergy and labor representatives.

"But some younger activists who have been disenchanted by Sharpton and the traditional black leadership are not planning to attend. Moreover, many of them will be participating in a 'National Day of Resistance' also planned for Saturday.

"Organizers of that protest, not surprisingly, are using more confrontational language that appears to be in stark contrast to the National Action Network's call for legislative action."

A website for the group organizing the Day of Resistance says:

"What started as an urban revolt of young black people in Ferguson, MO has grown into a national movement for Black lives.

"The entire nation is awakening to the reality of our broken criminal justice system. We cannot stop or slow down now. This Saturday, we're taking it to the next level."

"The 'Millions March NYC' rally began at 2 p.m., with protesters chanting, 'What do we want? Justice! When do we want it? Now!' as they marched up Fifth Avenue.

"Iris Baez, whose son Anthony Baez died in a police chokehold in the Bronx in 1994, marched near the head of the demonstration. She said she flew to New York from Florida to join the recent protests."

In Boston, protesters made speeches and chanted slogans from the steps of the State House and Boston Common.

The Globe reports that police were out in force for what was mostly a peaceful protest, but the AP says that nearly two dozen people were arrested for disorderly conduct after clashing with police blocking an Interstate 93 onramp.

An earlier version of this story misspelled Dante Gabourel's name as Gabovuel.