Accessibility links
'Torture Report': A Closer Look At When And What President Bush Knew : The Two-Way A Senate investigation says President George W. Bush was not briefed on the specifics of how the CIA interrogated terrorism suspects until four years into the program. Bush denies that.

'Torture Report': A Closer Look At When And What President Bush Knew

'Torture Report': A Closer Look At When And What President Bush Knew 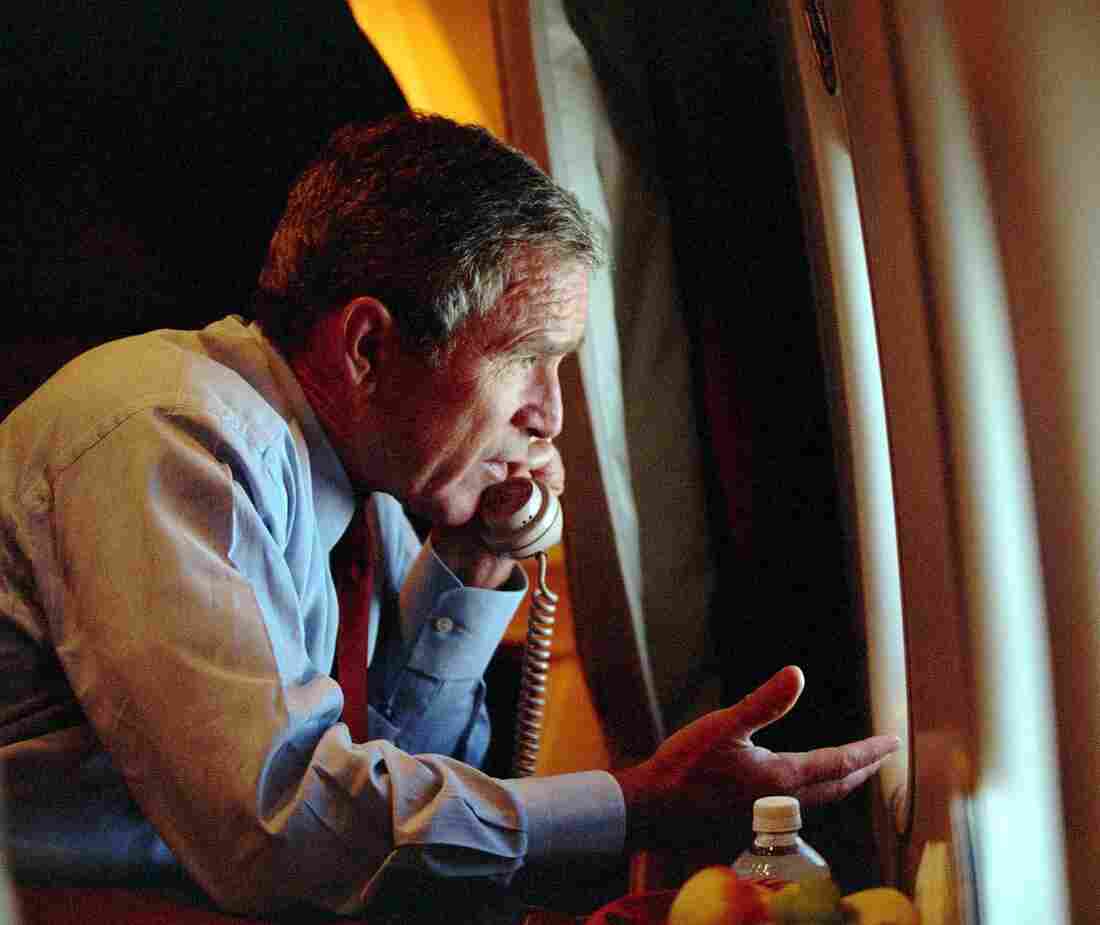 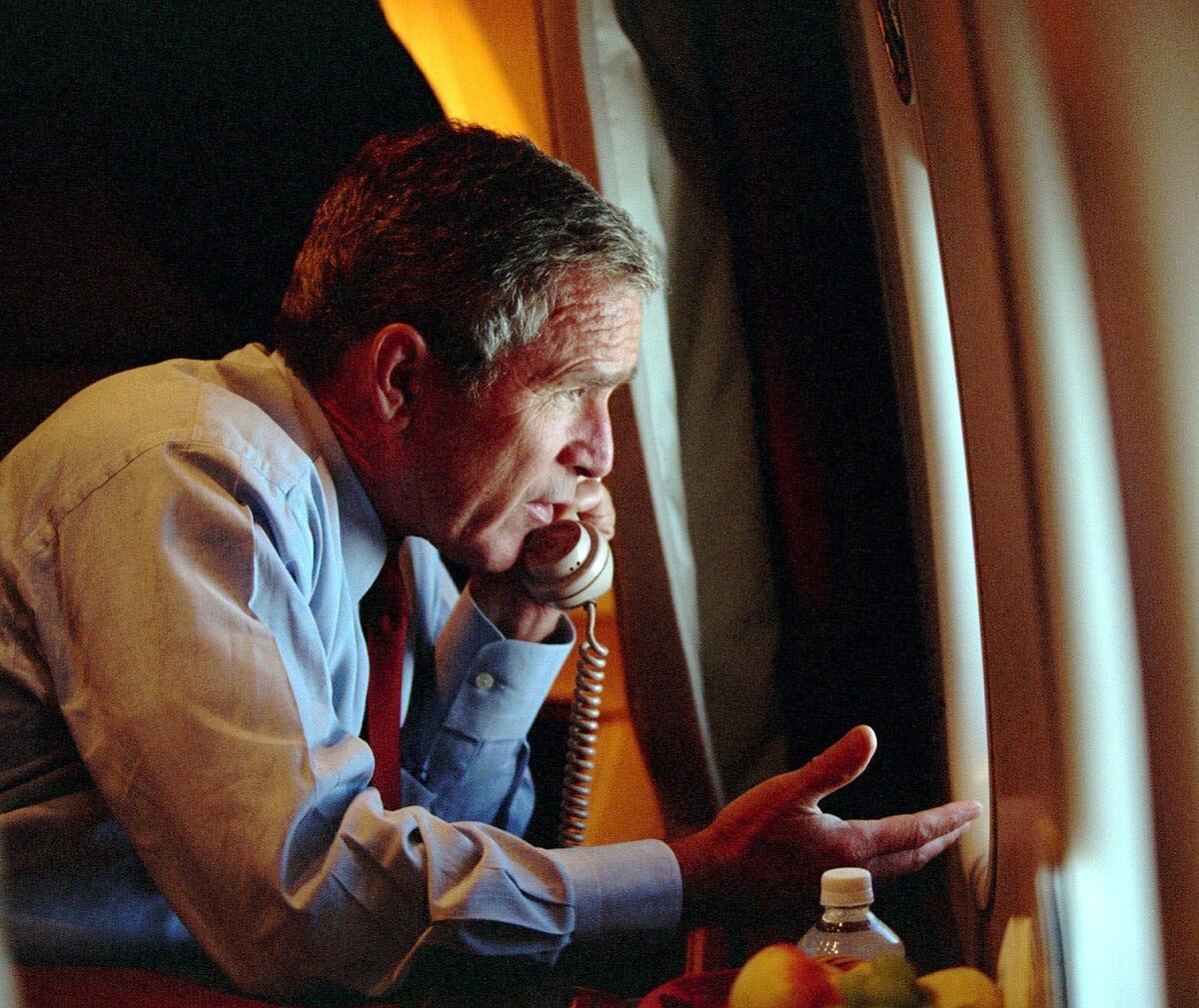 President George W. Bush speaks to Vice President Dick Cheney by phone aboard Air Force One after departing Offutt Air Force Base in Nebraska on Sept. 11, 2001.

Accounts differ. The Senate Select Committee on Intelligence report says one thing; Bush himself says another in his memoir. To try to keep it simple, we'll explore what happened in two crucial years — 2002 and 2006.

In a future post, we'll focus on what Bush may have known based on a major policy speech in which he first publicly revealed the existence of secret prisons.

With that, let's start with the briefing:

The Lead-Up To The Briefing

Following the attacks of Sept. 11, 2001, the Bush administration was grappling with what to do with important al-Qaida figures captured on the battlefield.

On Sept. 17, 2001, Bush signed a classified covert action memo authorizing the CIA to detain terrorists. After batting around different ideas, including holding suspects on military bases, they decided to keep them at secret prisons — known as black sites — around the world.

In the spring of 2002, the U.S. received the first important detainee, Abu Zabaydah, who has been described as al-Qaida's travel agent for helping coordinate attacks.

In June and July, the CIA had begun developing a dozen interrogation techniques that went beyond those allowed in the Army Field Manual.

The CIA told the White House that it needed these new techniques because "countless more Americans may die unless we can persuade [Abu Zubaydah] to tells us what he knows."

In a letter dated July 13, 2002, John Yoo, a lawyer at the Justice Department's Office of Legal Counsel, wrote that he believed those techniques were legal.

National Security Adviser Condoleezza Rice, however, put a hold on that decision four days later, saying the attorney general should have time to weigh in.

Rice also asked the CIA to provide descriptions of the techniques and an "explanation of why the CIA is confident these techniques will not cause lasting and irreparable harm to Abu Zubaydah."

Rice received a frank assessment from the CIA, including contingency plans for what would happen if Abu Zabaydah died during the course of questioning. In one cable, the team that would interrogate Abu Zubaydah writes that considering the "psychological pressure techniques" they were planning to use, they should make sure that Abu Zubaydah "will remain in isolation and incommunicado for the remainder of his life."

On July 24, 2002, Attorney General John Ashcroft verbally approved the use of 10 interrogation techniques including "the attention grasp, walling, the facial hold, the facial slap (insult slap), cramped confinement, wall standing, stress positions, sleep deprivation, use of diapers and use of insects." Two days later, Ashcroft verbally approved the use of waterboarding.

To Brief The President?

At the same time, the CIA also anticipated that it would need to brief Bush before it used the new techniques. It went on to prepare talking points, which described the techniques as going "beyond what was normally permitted by law enforcement."

The talking points included a "brief description of the waterboard interrogation technique."

On Aug. 1, two important things happened: One, the Justice Department's Office of Legal Counsel issued two memos, concluding that the proposed interrogation techniques were legal. Two, those descriptions of waterboarding were dropped from the proposed briefing based on the recommendation of White House Counsel Alberto Gonzales.

Ultimately, however, those talking points were never used, because on Aug. 2, the CIA received word from the White House's National Security Council that "Dr. Rice had been informed that there would be no briefing of the President on this matter."

Journalist Kurt Eichenwald, who wrote 500 Days, helps to fill in a bit of what happened over at the White House.

In his account, George Tenet, director of central intelligence; John Rizzo, the CIA's top lawyer; Rice and Gonzales met in the Situation Room. Tenet said the interrogation techniques used on Abu Zubaydah so far weren't working, so they needed new, tougher ones, including waterboarding.

Gonzales left the meeting to brief Bush at the Oval Office. Eichenwald writes that Gonzales gave Bush an outline and when Bush asked for specifics, Gonzales said: "Mr. President, I think for your own protection you don't need to know the details of what's going on here."

"All right," he said, according to Eichenwald. "Just make sure that these things are lawful."

Those accounts are different from the way Bush remembers things.

In his memoir, Decision Points, Bush says that in 2002, he was told of the techniques to be used on Abu Zubaydah.

He remembers it was Tenet who told him that Abu Zubaydah had "more information to reveal." And Bush writes that he asked his team for options and they presented him with "a list of interrogation techniques that differed from those Zubaydah had successfully resisted."

At his direction, Bush writes, the Justice Department reviewed the legality of the techniques.

"I took a look at the list of techniques," he wrote. "There were two that I felt went too far, even if they were legal. I directed the CIA not to use them."

Rizzo, who sat at that Situation Room meeting described by Eichenwald, also remembers this differently.

In an interview with NPR and in his memoir, Company Man, Rizzo says that after reading Bush's memoir, he asked Tenet if he had ever briefed Bush.

"George wrote back right away, saying, 'I have no recollection of ever briefing President Bush about the techniques at that time,' " Rizzo said in the interview with NPR. "So taking all that together, I just have to conclude that his account is wrong. Here we had a situation where the president, President Bush, in his book was claiming to be up to his neck in the details of the most controversial program in the post-9/11 era when, at least I'm satisfied, he was not. So I found that admirable. He was — I think I called him in the book a standup guy for that."

According to the Senate report, by 2003, a year after the CIA had begun torturing terrorism suspects, some in the CIA believed Bush had still not been briefed. Tenet told the CIA's inspector general in August 2003 that he had never spoken to Bush about the interrogation techniques and he wasn't aware "whether the President had been briefed by his staff."

In a May 2004 review, the IG made it a point to say the agency should brief the president.

For the next two years, spurred by congressional pressure, the IG kept asking if the president had been briefed.

These were critical years for the program, because in November 2005, the Washington Post published a story that described the secret prisons. The administration then started to prepare for Bush to make a public statement.

The Senate report concludes that based on CIA records, Bush was not fully briefed by the CIA until April 8, 2006, about four years after the CIA tortured some detainees.

"CIA records state that when the president was briefed, he expressed discomfort with the 'image of a detainee, chained to the ceiling, clothed in a diaper and forced to go to the bathroom on himself,' " the report reads.

The report also points to a document prepared in September 2006, the same month Bush publicly acknowledged the U.S. was holding detainees in secret prisons. It was intended as a Q&A to help the National Security Council principals deal with fallout of public disclosure. One question asked, "What role did the president play... Was he briefed on the interrogation techniques, and if so when?"

The answer: "President was not of course involved in CIA's day to day operations — including who should be held by CIA and how they should be questioned — these decisions are made or overseen by CIA directors."