Accessibility links
Gunman Made Anti-Police Posts Before Killing NYPD Officers : The Two-Way The assailant, identified as 28-year-old Ismaaiyl Brinsley, is thought to have shot his ex-girlfriend and then used her Instagram account to post threatening messages. 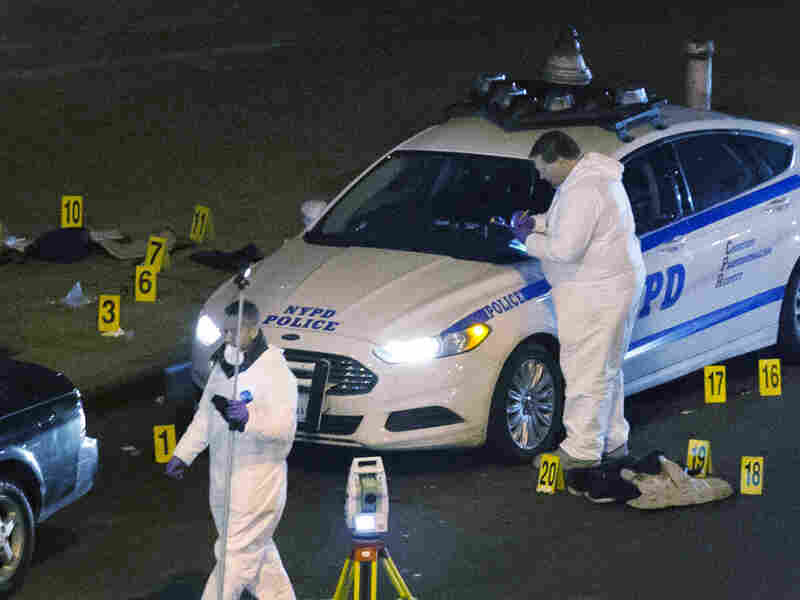 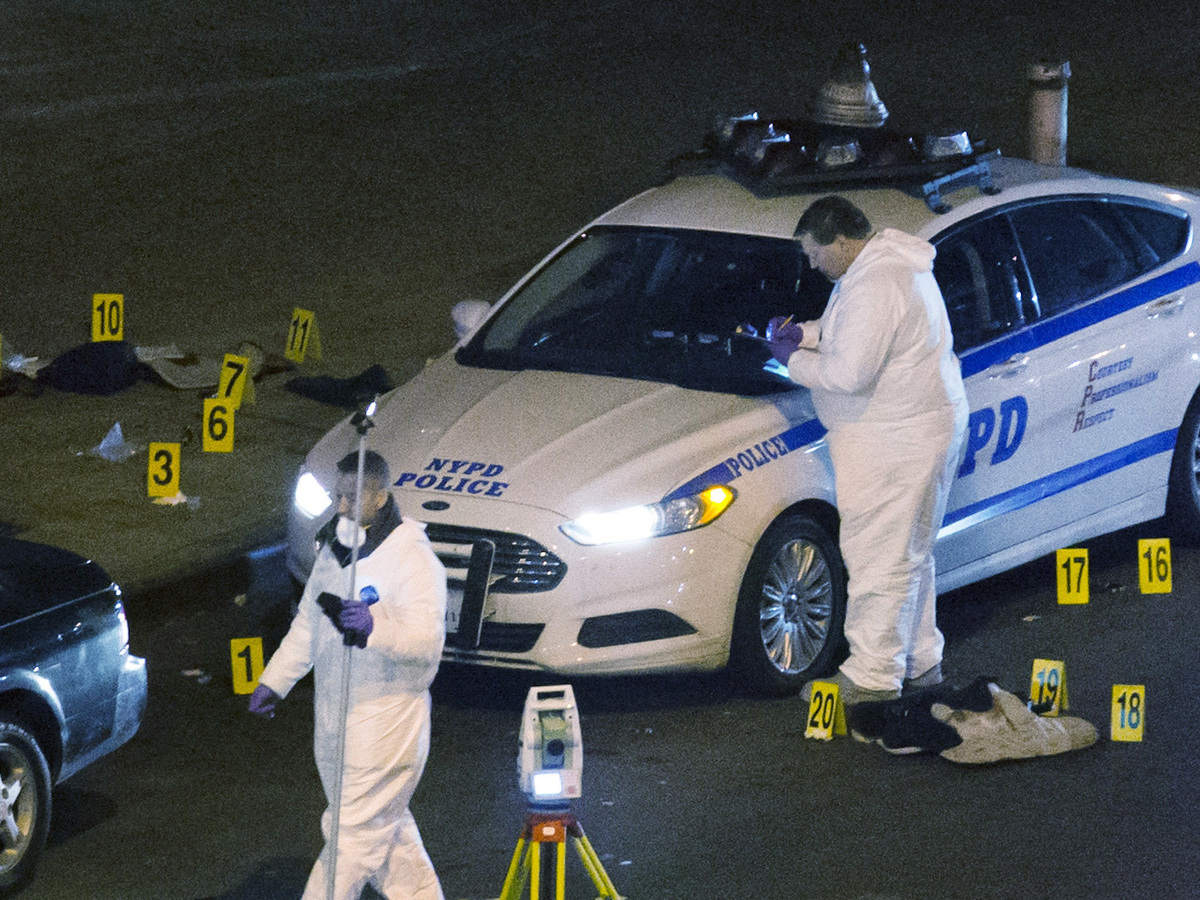 Investigators work at the scene where two NYPD officers were shot on Saturday.

The gunman who ambushed and killed two New York City police officers in their patrol car before committing suicide reportedly posted messages on social media suggesting the assault was revenge for deaths of two unarmed black men at the hands of authorities. 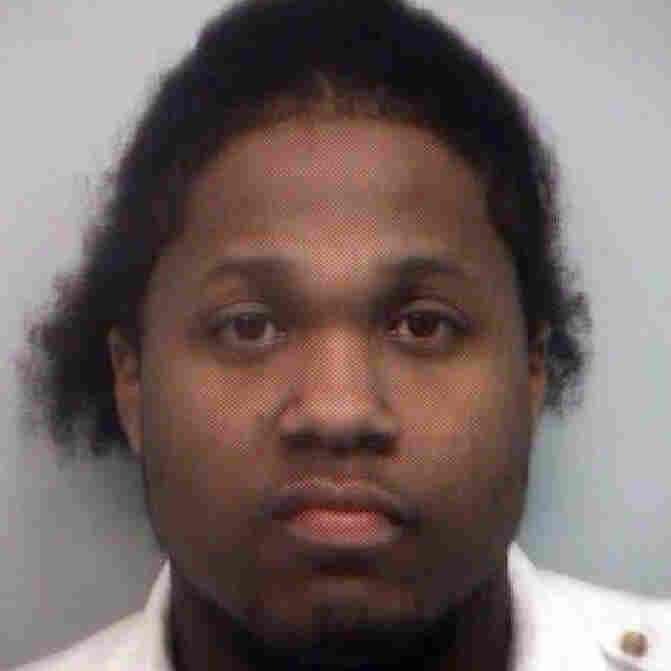 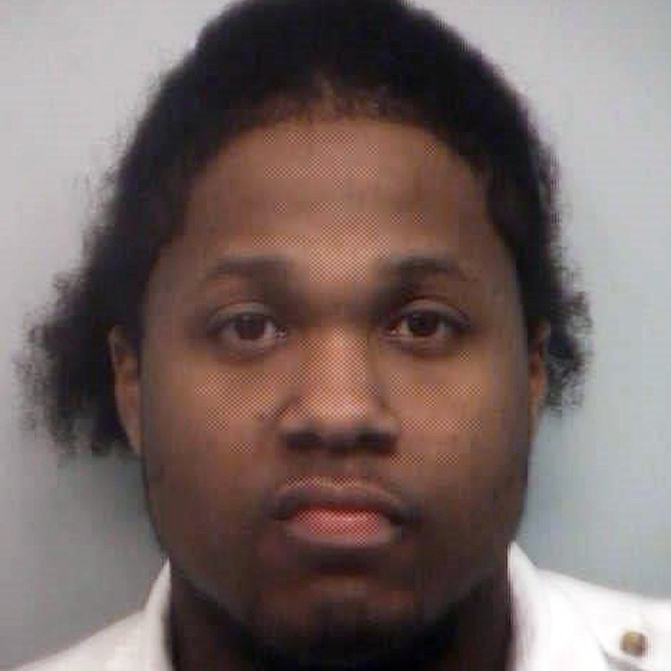 This 2010 booking photo provided by the Fulton County, Ga. Sheriff's office shows Ismaaiyl Brinsley after he was arrested on charges of terroristic threats, simple battery and marijuana possession.

Ismaaiyl Brinsley, 28, posted on an Instagram account before the shootings: "I'm putting wings on pigs today. They take 1 of ours, let's take 2 of theirs." He used the hashtags #Shootthepolice #RIPErivGardner (sic) #RIPMikeBrown, according to The Associated Press.

The Instagram page, which police say belonged to the gunman's ex-girlfriend, showed a photo of a silver automatic handgun. Another photo showed what appeared to be Brinsley's camouflage pants and blue sneakers. One post read: "I Rather Die a Gangster Then Go To Sleep A Coward."

New York Police Commissioner Bill Bratton said that early Saturday morning a woman, thought to be Brinsley's former girlfriend, was shot and seriously wounded at her residence near Baltimore.

"Baltimore County detectives later received information from the victim's mother that Brinsley was posting on the victim's Instagram account," Bratton said, and Brinsley "had associations with the East Flatbush area of Brooklyn."

Bratton said that Baltimore-area officials sent a fax warning to the NYPD and other agencies, but that the message was received moments too late.

The commissioner said the slain officers — identified as Rafael Ramos, 40, and Wenjian Liu, 32 — were killed without warning or provocation. "They were quite simply assassinated, targeted for their uniform," he said. 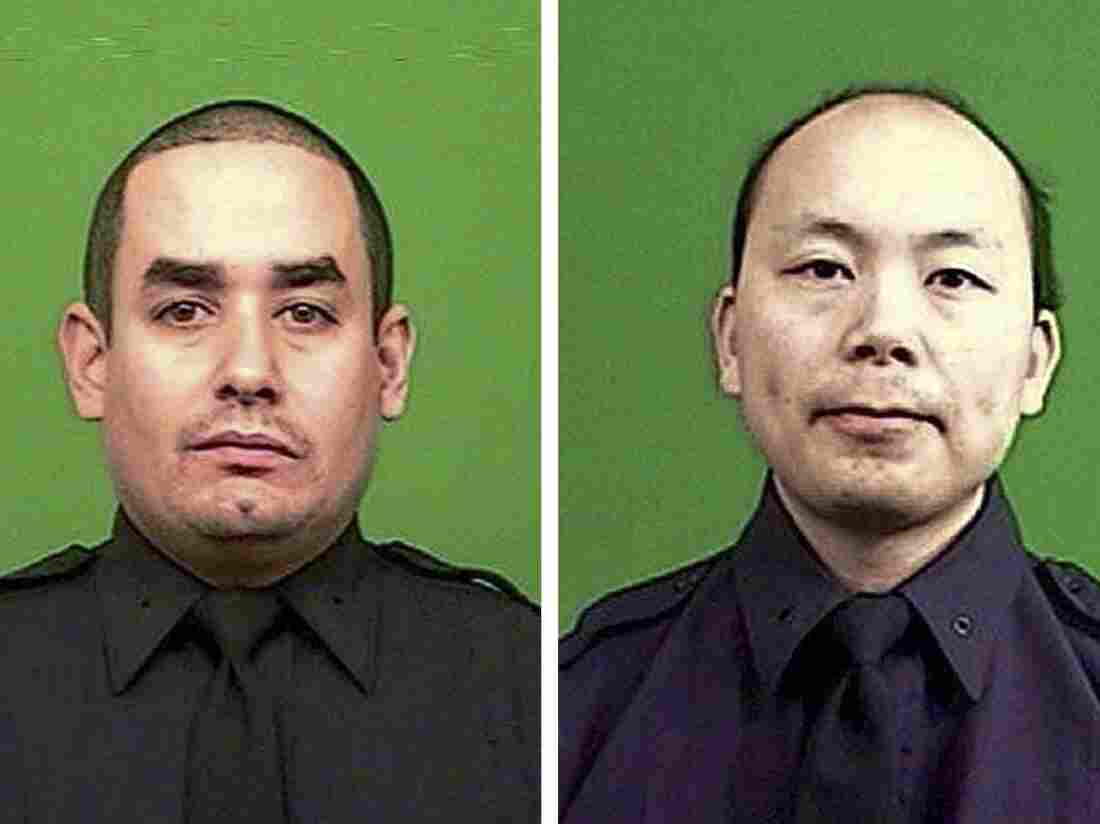 Officer Rafael Ramos (left) and Wenjian Liu (right) were killed on Saturday in an ambush by a gunman in a Brooklyn neighborhood. NYPD/EPA/Landov hide caption 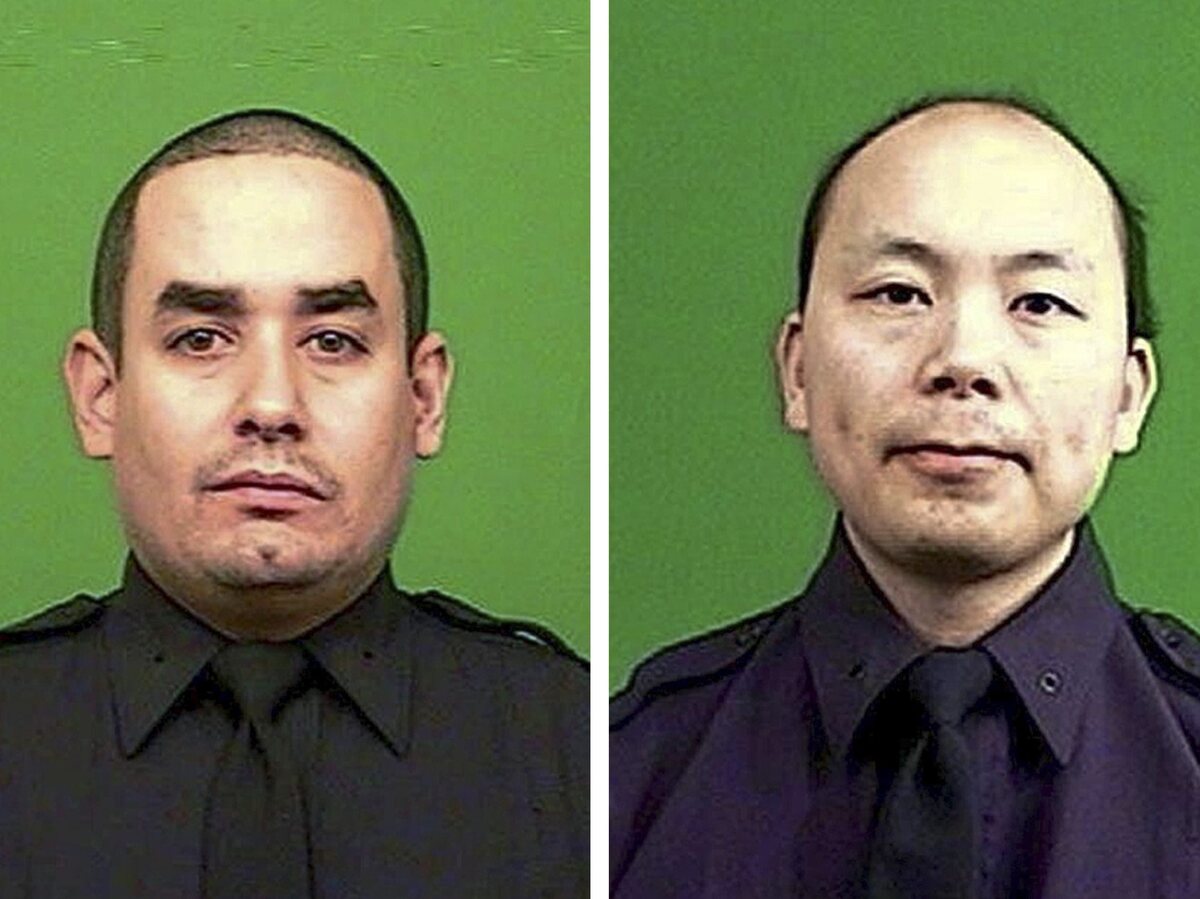 Officer Rafael Ramos (left) and Wenjian Liu (right) were killed on Saturday in an ambush by a gunman in a Brooklyn neighborhood.

Robert Lewis from member station WNYC in New York, tells Weekend Edition Sunday the officers were "just sitting in their car, and apparently a man walked up and without saying a word, fired multiple shots through the passenger window, striking both officers in the head."

After shooting Ramos and Liu in the Bedford-Stuyvesant neighborhood of Brooklyn, Brinsley was chased by officers into a nearby subway station, where the gunman shot himself in the head on a train platform.

"A silver semi-automatic firearm was recovered on the subway platform near the suspect's body," Bratton said.

The incident comes after heightened tensions between the police and the African-American community over the videotaped police chokehold death of Eric Garner in New York and the fatal police shooting of Michael Brown in Missouri.

When police officers are murdered, it tears at the foundation of our society. This heinous attack was an attack on our entire city.

It also follows frosty relations between the New York City mayor's office and the police union. The NYC Patrolmen's Benevolent Association has been highly critical of Mayor Bill de Blasio for what the union perceives as a lack of support for officers, especially amid large anti-police protests in the city in the wake of the Garner and Brown killings.

"There's blood on many hands tonight," PBA President Pat Lynch said Saturday night, suggesting that the blame rested with those who "incited violence on the street under the guise of protest.

"That blood on the hands starts on the steps of City Hall, in the office of the mayor," he said.

The Rev. Al Sharpton said Garner's family denounced the violence. Brown's family condemned the shooting in an online posting by their attorney.

"We have stressed at every rally and march that anyone engaged in any violence is an enemy to the pursuit of justice for Eric Garner and Michael Brown," Sharpton said.

Late Saturday, President Obama also condemned the murders, saying that officers who serve their communities "deserve our respect and gratitude every single day. Tonight, I ask people to reject violence and words that harm, and turn to words that heal — prayer, patient dialogue, and sympathy for the friends and family of the fallen."