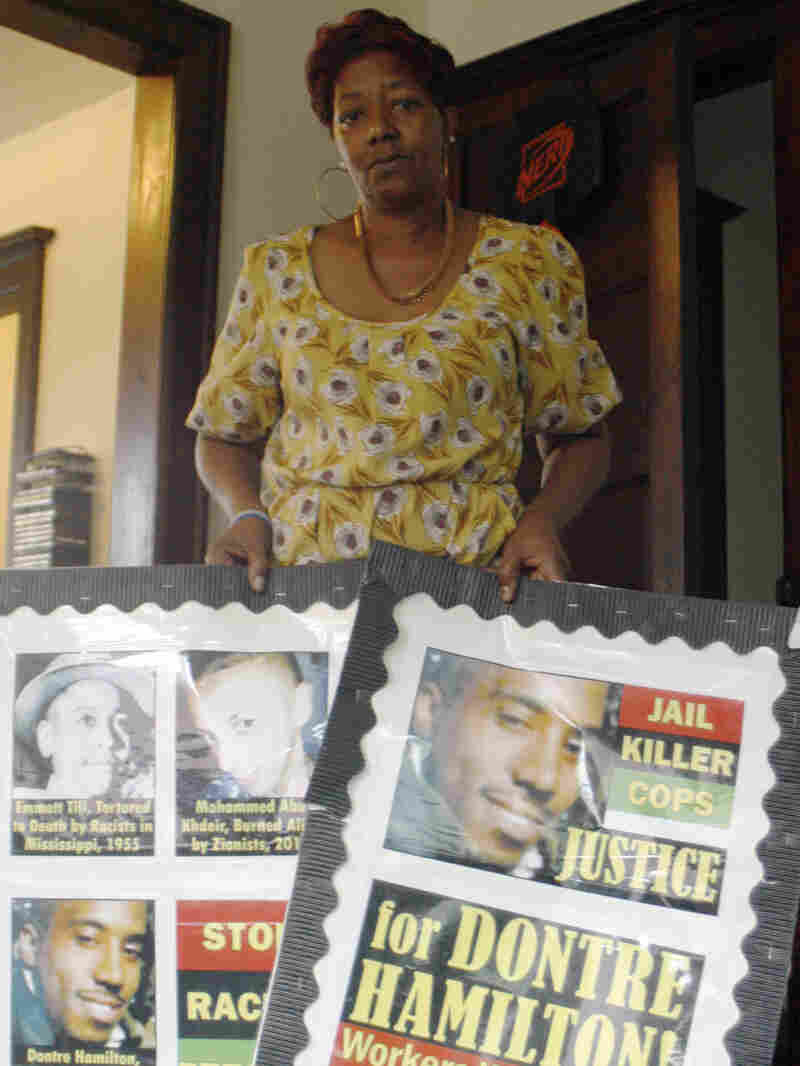 A Milwaukee prosecutor says no charges will be filed against a police officer who shot and killed Donte Hamilton in April. Here, Maria Hamilton holds posters used in rallies that vent frustrations about the death of her son. M.L. Johnson/AP hide caption 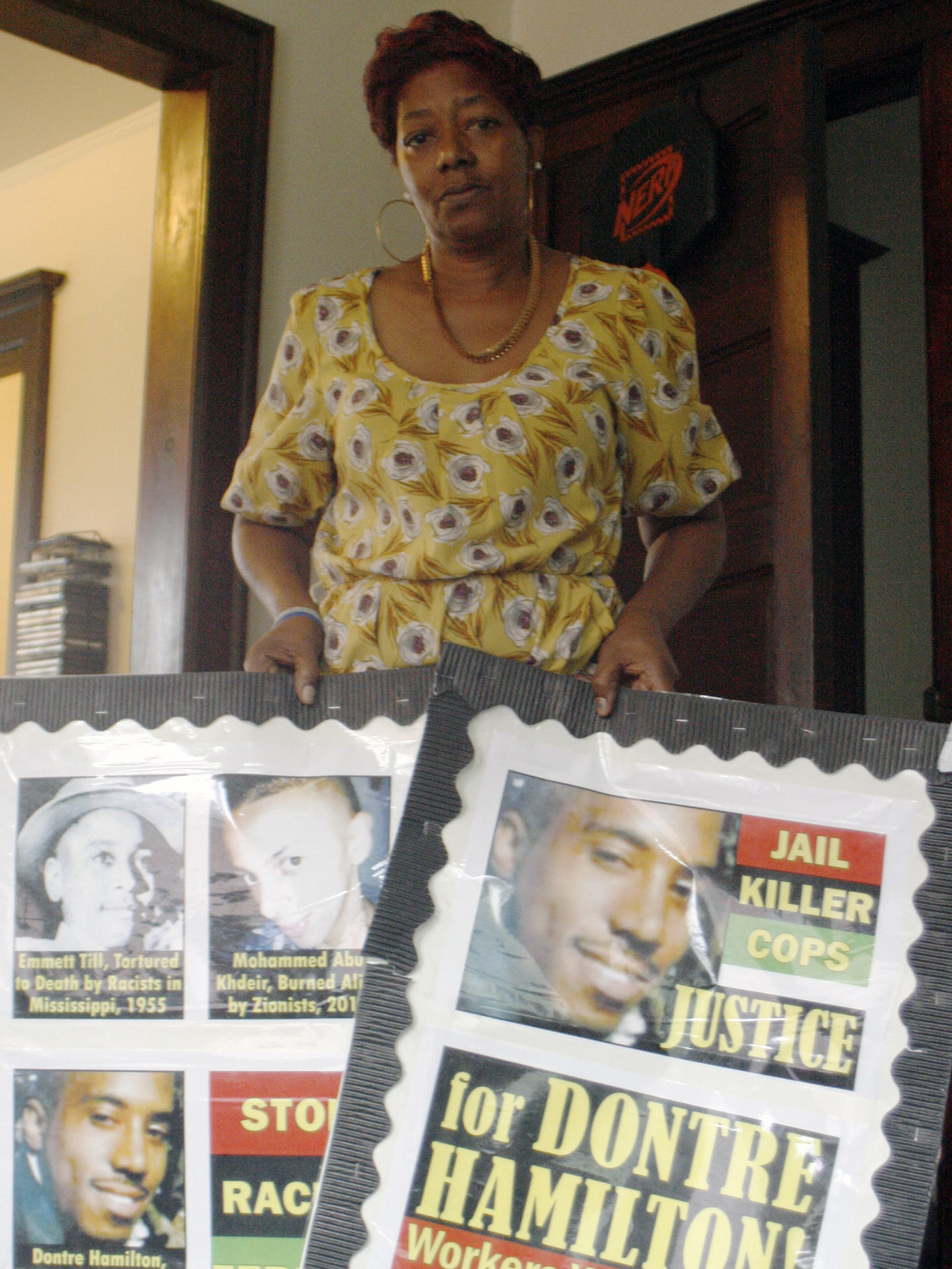 A Milwaukee prosecutor says no charges will be filed against a police officer who shot and killed Donte Hamilton in April. Here, Maria Hamilton holds posters used in rallies that vent frustrations about the death of her son.

Eight months after a police officer shot and killed a black man whom the officer had been trying to search, Milwaukee County District Attorney John Chisholm says the officer acted in self-defense.

The incident occurred in a Milwaukee park around 4 in the afternoon. Officer Christopher Manney, who is white, was trying to frisk Dontre Hamilton when the altercation happened. The two exchanged punches. Manney fired his gun 14 times after Hamilton grabbed the officer's baton, striking him with it.

From the Milwaukee Journal-Sentinel:

"This was a tragic incident for the Hamilton family and for the community," Chisholm wrote. "But, based on all the evidence and analysis presented in this report, I come to the conclusion that Officer Manney's use of force in this incident was justified self-defense and that defense cannot be reasonably overcome to establish a basis to charge Officer Manney with a crime."

The announcement comes after months of pressure on Chisholm to make a decision in the case — and a month after the police department fired the officer for violating its procedures in the encounter with Hamilton.

The incident began after workers at a Starbucks kiosk in a park in downtown Milwaukee called in complaints about a man sleeping nearby.

"Manney said he moved to frisk Hamilton in Red Arrow Park and Hamilton resisted, striking the officer with his own baton. Manney then opened fire 14 times, killing Hamilton.

"The 31-year-old was mentally ill and unarmed.

"Two other officers responded earlier to calls of concern about Hamilton, but concluded he was not a threat."

The case has drawn protests in Red Arrow Park, particularly as it has played out against a backdrop of similar instances across the U.S. in which white police officers have used deadly force against black men.

At a news conference Monday, Chisholm said he made his decision after receiving a report on the shooting. Member station WUWM has posted the 30-page report, which analyzes the events leading up to Hamilton's death.

The report includes an expert's assessment that the encounter between Manney and Hamilton wasn't a "passive pushing and pulling" but instead a "violent struggle and a dynamic assault."

Hamilton sustained 21 wounds from the 14 shots fired, Chisholm said, displaying a chart that detailed the location of the wounds. Many of the bullets struck Hamilton in the right arm and chest.

The prosecutor also played a video in which the same type of pistol that officer Manney used was fired 14 times, to demonstrate "how quickly a firearm that's issued to the Milwaukee Police Department can be fired in a relatively short period of time," Chisholm said.

The pistol's 14 bullets required just 2.99 seconds to be fired.

Hamilton's family released its own description of the events, saying in a statement through their attorney's office that Hamilton was not homeless, as has been reported elsewhere, and that at the time of his death he was carrying more than $160.

"Dontre Hamilton did not have an extensive criminal record," the family says. "He had a history of traffic violations, but no criminal record of violence."

The protesters have included Hamilton's brother, Nate, who said Friday, "You know, I'm sorry that we cause you a small inconvenience. It's to make sure that no family has to go through what we're going through right now."

Nate Hamilton added that he hoped the prosecutor would wait until after this week to make an announcement, saying, "I don't want to have to bear that type of decision before Christmas — nor my mom."

Milwaukee Sheriff David Clarke told the station that while the demonstrators' frustration is understandable, the protests have also disrupted the area.

"I can only imagine, because I've never gone through it," Clarke said, "but I can only imagine what the Hamilton family is dealing with right now. I can also say that it has had a destructive effect on the rest of Milwaukee County, and I'm talking about the delay."

Last month, Chisholm told WBUR's Here & Now that he had yet to make a decision in the case, despite having received an independent state report in August, because he was awaiting a review of Manney's use of force.

Responding to Chisholm's decision today, the Wisconsin chapter of the American Civil Liberties Union issued a statement in which it asked, "If Officer Christopher Manney did not violate the law, then is anyone legally responsible for Mr. Hamilton's death? Does the criminal law protect individuals like Mr. Hamilton from deadly force exercised by police officers?"