Accessibility links
AirAsia Plane Missing After Takeoff From Indonesia : The Two-Way Search operations have been suspended for the night after the Airbus A320, with 162 aboard, lost contact with the ground after takeoff from Indonesia. The flight was bound for Singapore. 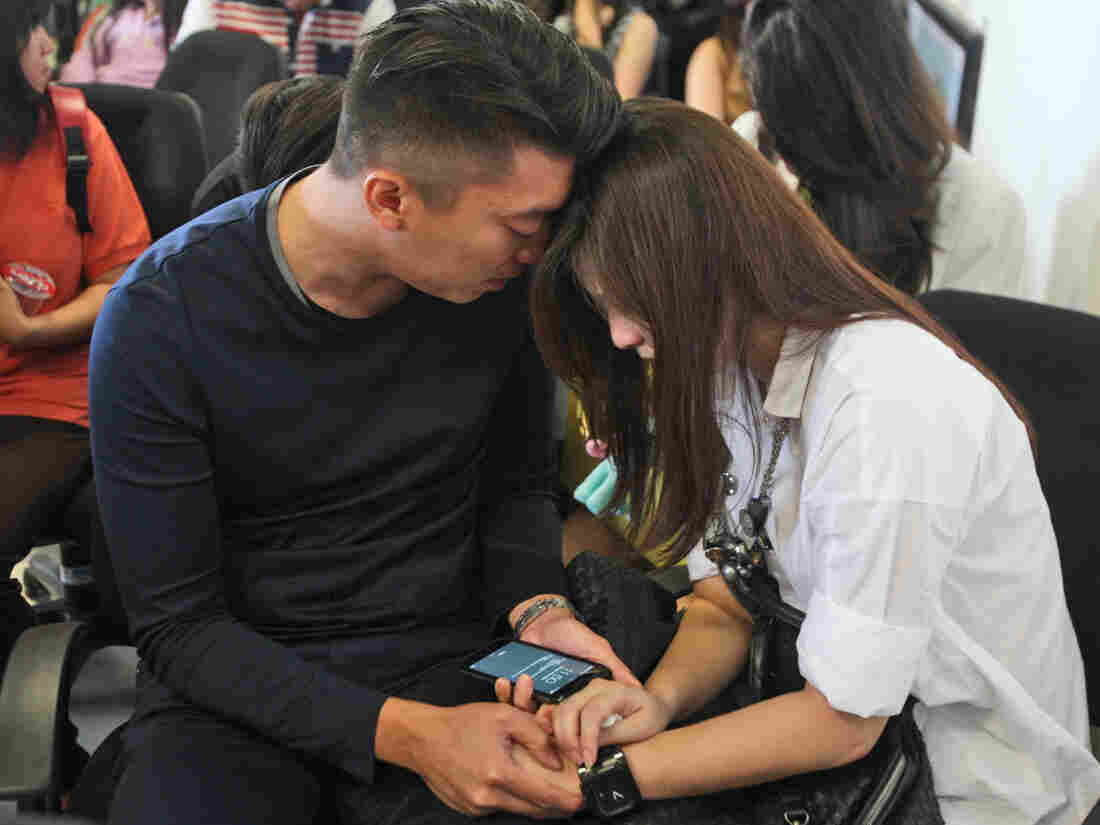 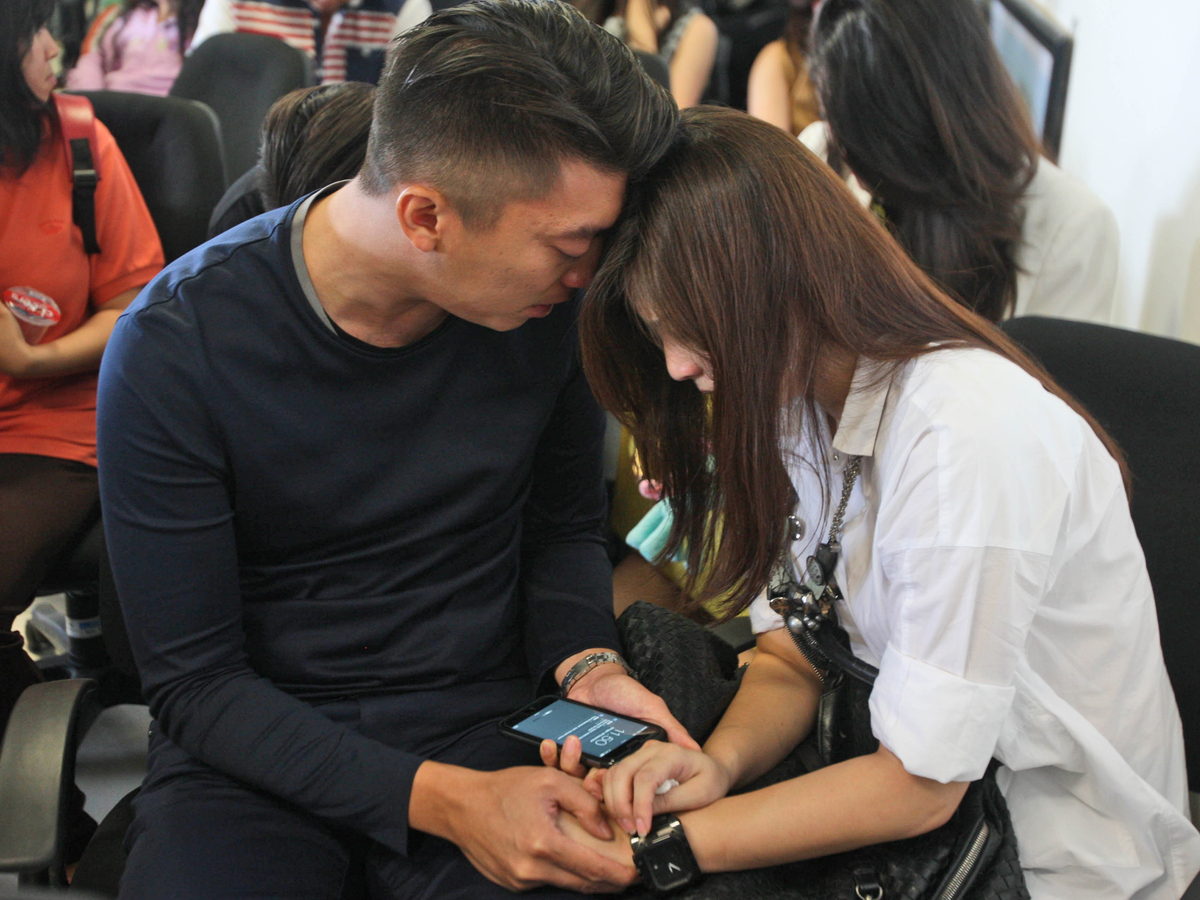 Relatives of passengers of AirAsia flight QZ8501 comfort each other Sunday at Juanda International Airport in Surabaya, Indonesia.

Search operations have been suspended for the night for an AirAsia plane with 162 aboard that lost contact with air traffic control after takeoff from Indonesia on a flight to Singapore, the Singapore Civil Aviation Authority reports.

The plane, en route from Surabaya, Indonesia, lost contact about an hour before it was due to arrive in Singapore. It was scheduled to land at 8:30 a.m. Singapore time (7:30 p.m. ET Saturday), Hadi Mustofa, an official with the Indonesian air ministry, said on Indonesia's MetroTV.

The plane, flight QZ8501 from Surabaya, Indonesia, was an Airbus A320-200 with the registration number PK-AXC.

If #QZ8501 went down in Java Sea, it is relatively shallow and one of world's busiest maritime routes. pic.twitter.com/ggQ3OfVvZ5

Mustofa added that the plane had asked to change its flight path due to weather conditions just before losing contact with air traffic controllers, NPR's Anthony Kuhn reports.

AirAsia, a regional low-cost carrier, reports on its Facebook page, "AirAsia Indonesia regrets to confirm that flight QZ8501 from Surabaya to Singapore has lost contact with air traffic control at 07:24hrs this morning."

In a statement on the airline's website, it says QZ8501 "was on the submitted flight plan route and was requesting deviation due to enroute weather before communication with the aircraft was lost while it was still under the control of the Indonesian Air Traffic Control (ATC)." It added that the aircraft had its last scheduled maintenance on Nov. 16.

In a later statement, CEO of AirAsia Indonesia Sunu Widyatmoko said: "We are deeply shocked and saddened by this incident. We are cooperating with the relevant authorities to the fullest extent to determine the cause of this incident. In the meantime, our main priority is keeping the families of our passengers and colleagues informed on the latest developments."

The airline has set up an emergency call center for family and friends of those who may be on board.

Among the passengers, three are South Korean, one is from Singapore, one from Malaysia and one from the United Kingdom, according to an AirAsia Facebook post. The remaining 149 are Indonesian, according to the post.

One of the crew is French; the remaining six are Indonesian.

Mustofa told the media that the plane lost contact when it was believed to be over the Java Sea between Kalimantan and Java islands. The weather in the area was cloudy, he said.

Malaysia-based AirAsia has profited from the growth of the middle class in Southeast Asia and now dominates low-cost air travel in the region, says Kuhn. It's the first time the carrier has lost a flight, he says.

At a news briefing today, Fernandes said he was "devastated" by the loss of the flight: "For the moment, we don't want to speculate. We do not know what's happened."

The U.S. State Department and the National Transportation Safety Board, or NTSB, have said they are prepared to assist Indonesian authorities if necessary.

Malaysia's national carrier, Malaysia Airlines, suffered two unrelated disasters in 2014, both involving Boeing 777s. Flight MH370 disappeared mysteriously from radar en route from Kuala Lumpur to Beijing in March. The hunt for the wreckage of that plane and the 239 people on board continues.

In July, Flight 17 from Amsterdam to Kuala Lumpur was shot down over rebel-held territory of eastern Ukraine with 298 aboard. "Evidence indicates that the plane was shot down by a surface-to-air missile from an area controlled by Russian-backed separatists inside of Ukraine," President Obama said at the time.

AP quotes an expert on air crash search and rescue with Embry-Riddle Aeronautical University in Prescott, Ariz., who argued against connecting the AirAsia flight to MH370.

"I think we have to let this play out," said William Waldock. "Hopefully, the airplane will get found, and if that happens it will probably be in the next few hours. Until then, we have to reserve judgment."

Waldock said authorities are more likely to find QZ8501 because the intended flight time was less than two hours and they know the location in which the plane disappeared.

"We don't dare to presume what has happened except that it has lost contact," Djoko Murjatmodjo, Indonesia's acting director general of transportation, told reporters. He said the pilot "asked to avoid clouds by turning left and going higher to 34,000 feet."