Accessibility links
NYPD's Wenjian Liu, Killed In Dec. Shooting, Is Laid To Rest : The Two-Way Some of the thousands who attended the ceremony to honor the officer shot on Dec. 20 turned their backs as a gesture of disrespect for Mayor Bill de Blasio as he spoke. 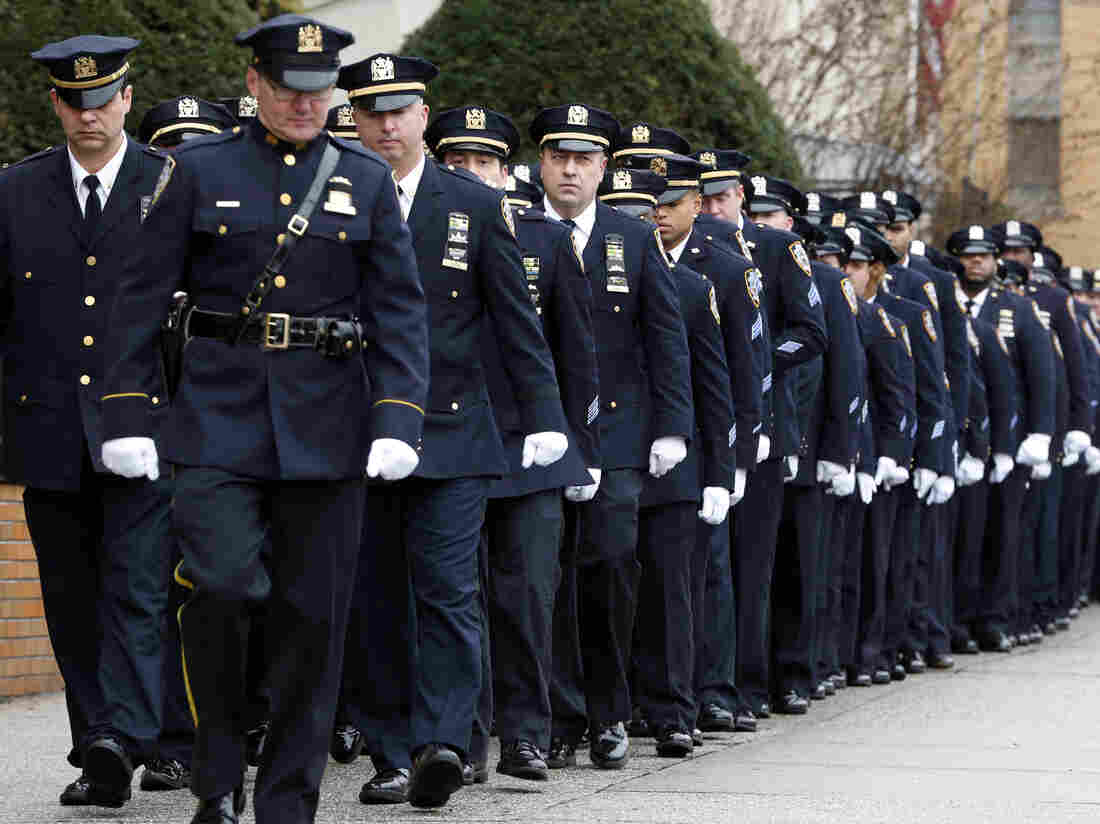 New York City police officers march before funeral services for police officer Wenjian Liu at Aievoli Funeral Home, in Brooklyn on Sunday. Liu and his partner were gunned down in an unprovoked attack on Dec. 20. Julio Cortez/AP hide caption 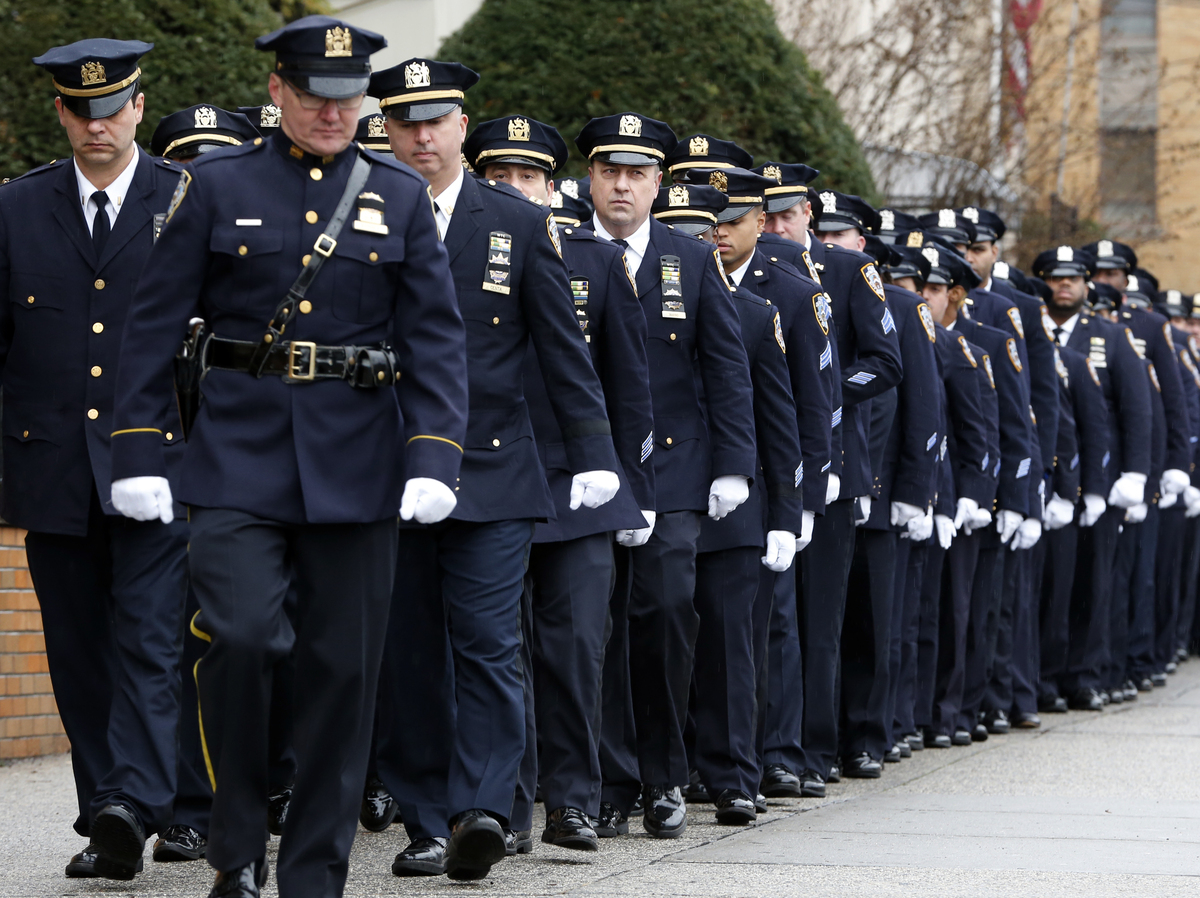 New York City police officers march before funeral services for police officer Wenjian Liu at Aievoli Funeral Home, in Brooklyn on Sunday. Liu and his partner were gunned down in an unprovoked attack on Dec. 20.

Thousands of police officers from across the country paid their respects to NYPD detective Wenjian Liu, one of two patrolmen who were gunned down last month in an unprovoked attack in a Brooklyn neighborhood.

Liu's widow, Pei Xia Chen, said "he is my hero." The couple had been married only a few weeks when the officer was killed on Dec. 20.

New York Police Department Chaplain Robert Romano quoted a Buddhist proverb: "When you are born, you cry, and the world rejoices. When you die, you rejoice, and the world cries."

But, as happened last week during the funeral for Liu's partner, Rafael Ramos, some officers used the service to stage a silent protest of New York Mayor Bill de Blasio by turning their backs on him as he spoke. 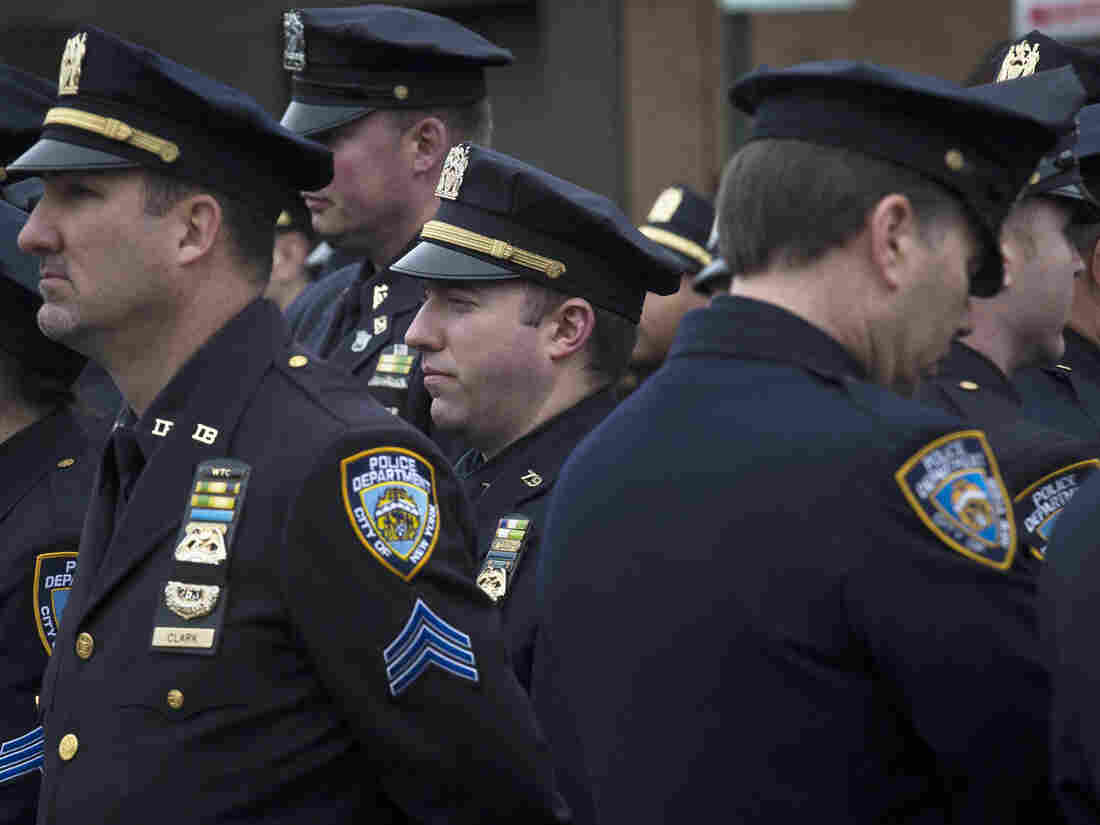 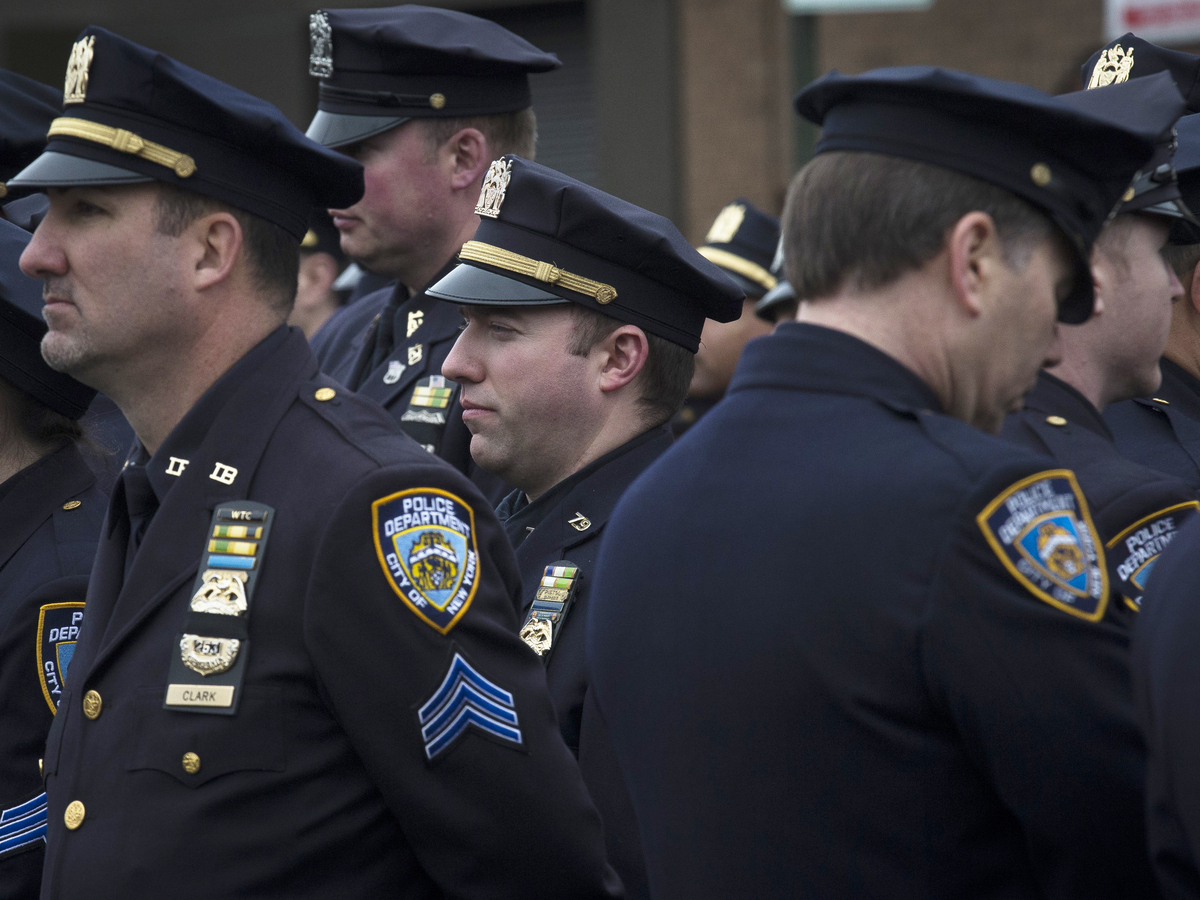 The two were killed on Dec. 20 by Ismaaiyl Brinsley, who approached their patrol car in the Bedford-Stuyvesant neighborhood of Brooklyn, firing several shots into their vehicle. The assailant later killed himself. Social media posts by Brinsley, who is black, suggest that the shooting was a revenge attack for the deaths of two or more black men at the hands of police.

The Associated Press says: "Buddhist monks will lead a Chinese ceremony for Officer Wenjian Liu, followed by a traditional police ceremony with eulogies led by a chaplain. Liu, 32, had served as a policeman for seven years and was married just two months when he was killed."

The mayor, FBI Director James Comey and Police Commissioner William Bratton were among those who spoke at the funeral.

"All of our city is heartbroken today," De Blasio said. "We've seen it these last few weeks. We've seen the pain."

Many had been watching for the reaction from rank-and-file officers attending the ceremony after many turned their backs on the mayor at last week's funeral for Ramos.

As the mayor spoke last week, officers watching on a giant screen outside the church turned their backs in a gesture of disrespect for the mayor. Some officers had done the same thing when De Blasio arrived at the hospital where the slain officers had been brought on the day of the shooting.

As we reported at the time, the incident has "laid bare a rift between the mayor and the NYPD. Shortly after [the Dec. 20] attack, the Patrolmen's Benevolent Association's president, Pat Lynch, accused the mayor of having "blood on his hands" for what is perceived as a lack of support for the department amid protests against police violence."

As the AP notes: "Many people, including Cardinal Timothy Dolan, have since pressed all parties to tone down the rhetoric. And this weekend, Police Commissioner William Bratton sent a memo to all commands urging respect, declaring 'a hero's funeral is about grieving, not grievance.' "