Accessibility links
What's Known About The Suspects In The Paris Shooting : The Two-Way One of the men, Chérif Kouachi, was convicted on terrorism charges in 2008. He served 18 months for helping to funnel fighters from France to Iraq. 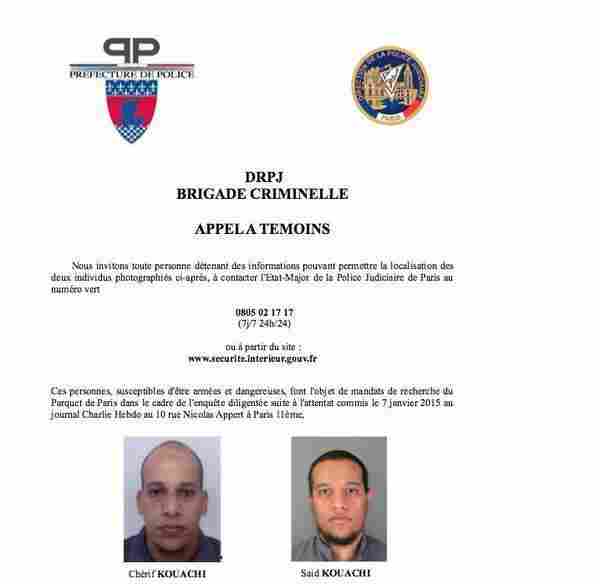 French authorities are on the hunt today for two brothers: Said and Chérif Kouachi, 34 and 32. Police say those two men are the main suspects in an attack on the Charlie Hebdo satirical magazine in Paris that left 12 people dead.

The two chief suspects, named as Said and Chérif Kouachi, 34 and 32, remain at large. Investigators believe Said Kouachi traveled to Yemen in 2011 to receive weapons training with Al-Qaeda in the Arabian Peninsula, NPR's Dina Temple-Raston reports, citing U.S. officials who've been briefed on the case.

Both Cherif and Said Kouachi have been on the U.S. no-fly list for years, U.S. officials tell NPR.

Here's a roundup of what's known about the two men:

-- NPR's Dina Temple-Raston says counterterrorism officials she has talked to have been careful not to link the two men to particular terrorist groups.

-- Chérif was known to authorities prior to Wednesday's attack, because he was convicted on terrorism charges in 2008. He served 18 months for helping to funnel fighters from France to Iraq.

Since Western powers began a war against the Islamic State, governments have expressed worries about their citizens traveling to Syria, becoming radicalized and then carrying out attacks at home.

-- Judging by the shot patterns left on a police cruiser yesterday, what is clear is that the two gunmen were very comfortable using high-powered weapons. It's likely, Dina says, that they received some military training. The question is where.

"Libération, a French newspaper, described Chérif Kouachi as an orphan whose parents were Algerian immigrants. It said he was raised in foster care in Rennes, in western France, and trained as a fitness instructor before moving to Paris, where he lived with his brother Said in the home of a convert to Islam. He held menial jobs, working at times as a pizza delivery man, shop assistant and fishmonger.

"He was first arrested in 2005 in connection with a case centered on Farid Benyettou, a 26-year-old janitor-turned-preacher who gave sermons calling for jihad in Iraq and justifying suicide bombings. Among Mr. Benyettou's would-be recruits was Chérif Kouachi, then 22, who was detained as he prepared to leave for Syria, the first leg of a trip he hoped would take him to Iraq."

-- Bloomberg reports that Chérif was arrested in 2010 for "suspected involvement in plotting the escape of one of the masterminds of bombings and terrorist attacks in 1995 that killed eight people and injured more than 200, according to police reports."

Citing Le Monde, Bloomberg adds that prosecutors decided to drop the case after holding Chérif for about four months.

Bernard Cazeneuve, the French Interior Minister, said during a press conference that Said Kouachi did not have a criminal record.

He said Said was unemployed and had emerged on the fringes of the investigations.

As we've reported, another suspect, identified by French media as 18-year-old Mourad Hamyd, turned himself in to police overnight.

The AFP just moved a video talking to his schoolmates, who said Hamyd was no Islamist. One of them told the wire service that Hamyd was at school at the time of the attack and so could not have been in Paris.