Accessibility links
World Leaders Join Unity March In Paris : The Two-Way Hundreds of thousands of people are expected to march in solidarity with the victims of last week's attacks and in support of free speech. 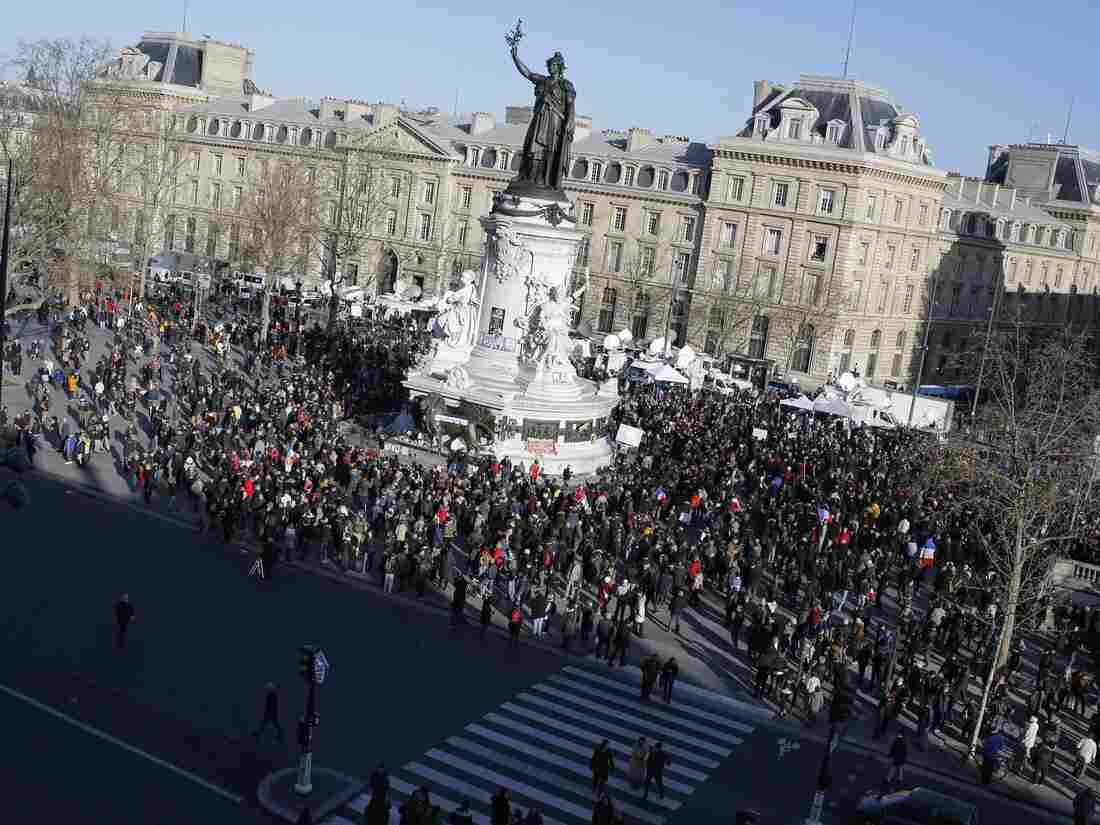 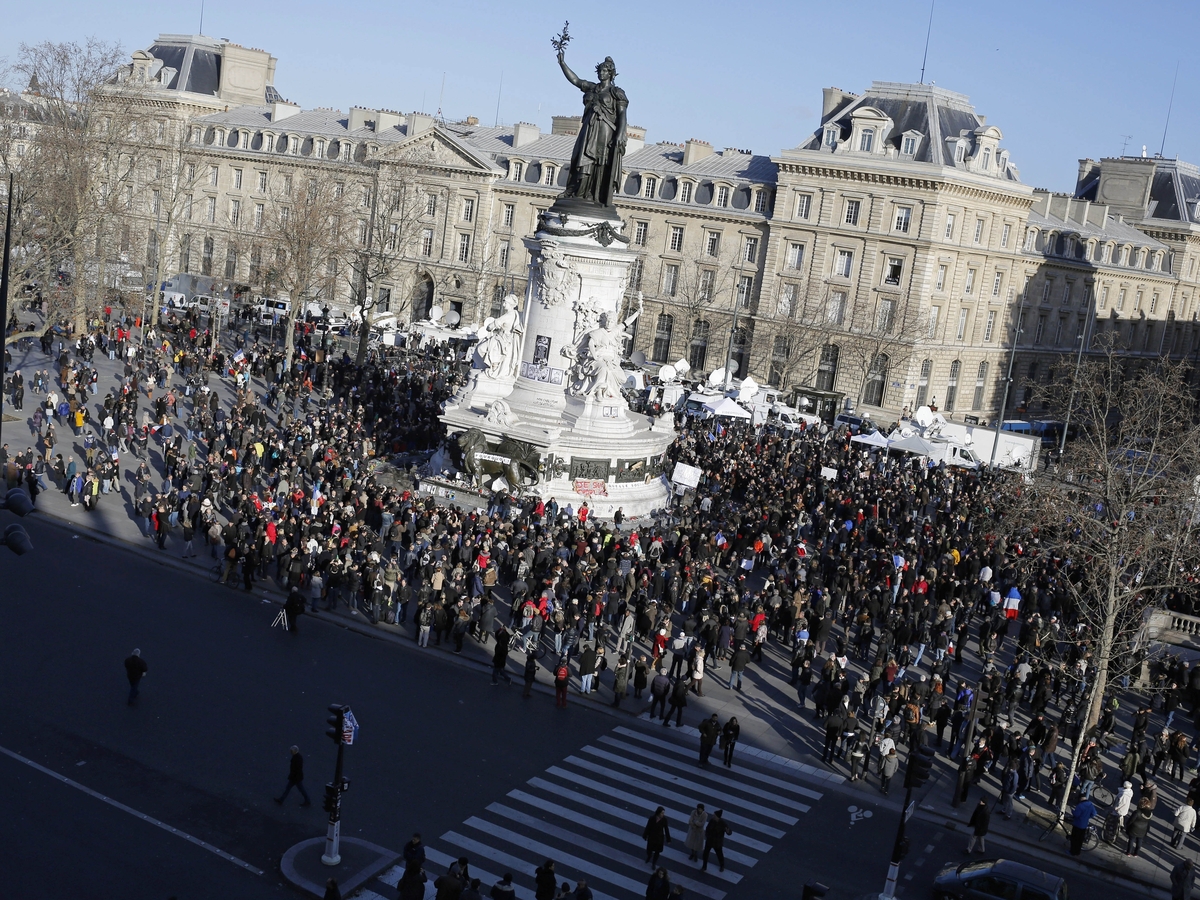 People gather at Place de la Republique before the demonstration in Paris to support victims of last week's violent attacks and free speech.

They were joined by hundreds of thousands of ordinary French citizens shocked and appalled by Wednesday's assault on the French satirical magazine Charlie Hebdo and Friday's siege of a Jewish supermarket. The two attacks left 17 people, and three assailants dead.

Lauren Frayer, reporting for NPR from Paris, says that "Hollande has called on French citizens to join him walking through the streets.

"Impromptu memorials have already popped up at some of the city's famed landmarks — Notre Dame cathedral, the Eiffel Tower, the Arc de Triomphe," Frayer says. 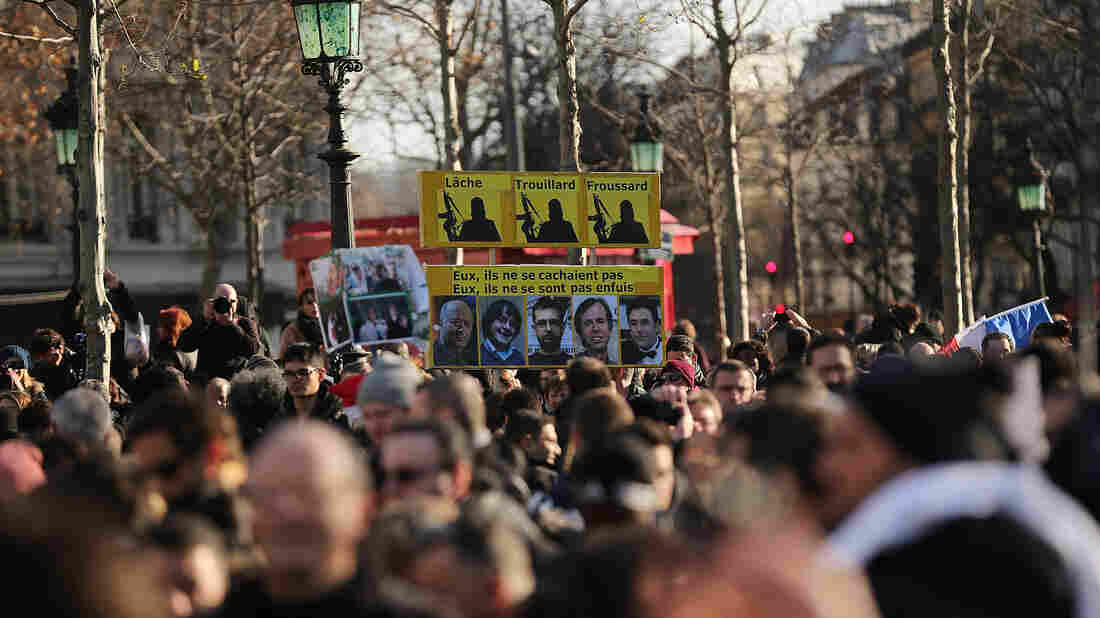 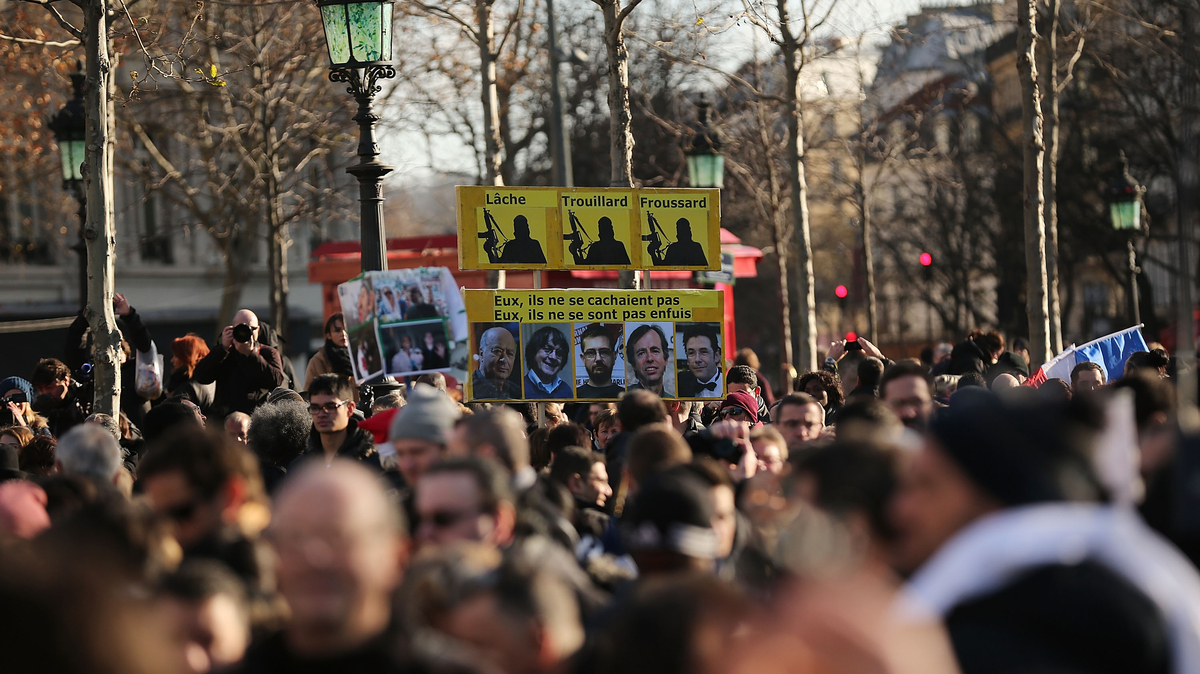 France is at its highest level of security, with thousands of extra police and soldiers in the streets for the rally, Frayer says.

The leaders from across Europe and around the globe will meet later in the French capital for security talks triggered by the bloody violence.

Speaking later at the Grande Synagogue in Paris, Netanyahu said the problem was not with Islam, but with radical Islam. He compared what happened in France to what he said was happening in Israel.

French President Francois Hollande has called on citizens to join him in the march. Hollande met earlier in the day with representatives of the nation's Jewish community, promising protection for schools and synagogues, according to the Jerusalem Post.

British Prime Minister David Cameron says the presence of European leaders will support the values behind Charlie Hebdo, whose Paris office was stormed last week by gunmen who killed 12 people. In all, there were 20 people killed in that attack and related violence, including the gunmen themselves.

German Chancellor Angela Merkel will join Hollande and Cameron in Paris, along with other heads of state, including Italy's Matteo Renzi, Spain's Mariano Rajoy and Ahmet Davutoglu of Turkey.

Also on Sunday, U.S. Attorney General Eric Holder met with European Union foreign ministers to discuss measures to prevent future attacks and stop the radicalization that leads Europeans to join extremists fighting in Syria and Iraq. Coming out of the talks, he announced a security summit to be held in Washington, D.C., on Feb. 18.

"We will bring together all of our allies to discuss ways in which we can counteract this violent extremism that exists around the world," Holder said.

Elsewhere in Europe, two suspects are being held in connection with an arson attack on the office of a regional German newspaper.

No one was inside when an incendiary device was thrown into the building. Like many European papers, the Hamburger Morgenpost published cartoons from Charlie Hebdo. Authorities are investigating whether the attack had any connection with the Paris violence.