Accessibility links
Ohio State Stops Oregon To Win NCAA Title : The Two-Way A game between two of college football's most powerful offenses came down to how often Oregon or Ohio State could grind out a yard or two. The Buckeyes usually managed it, and won 42-20. 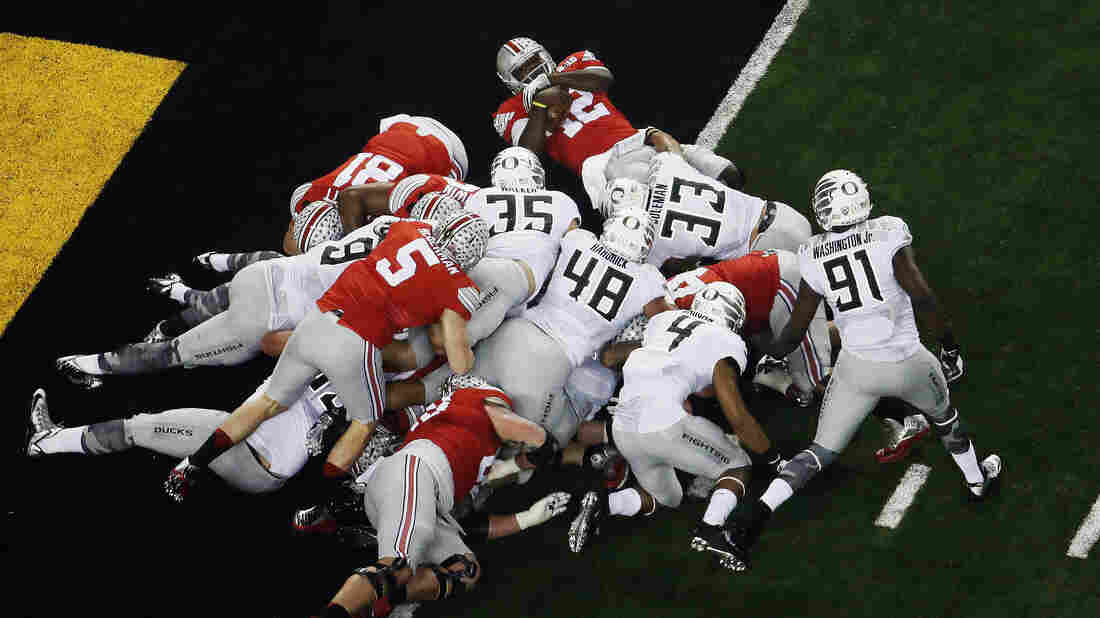 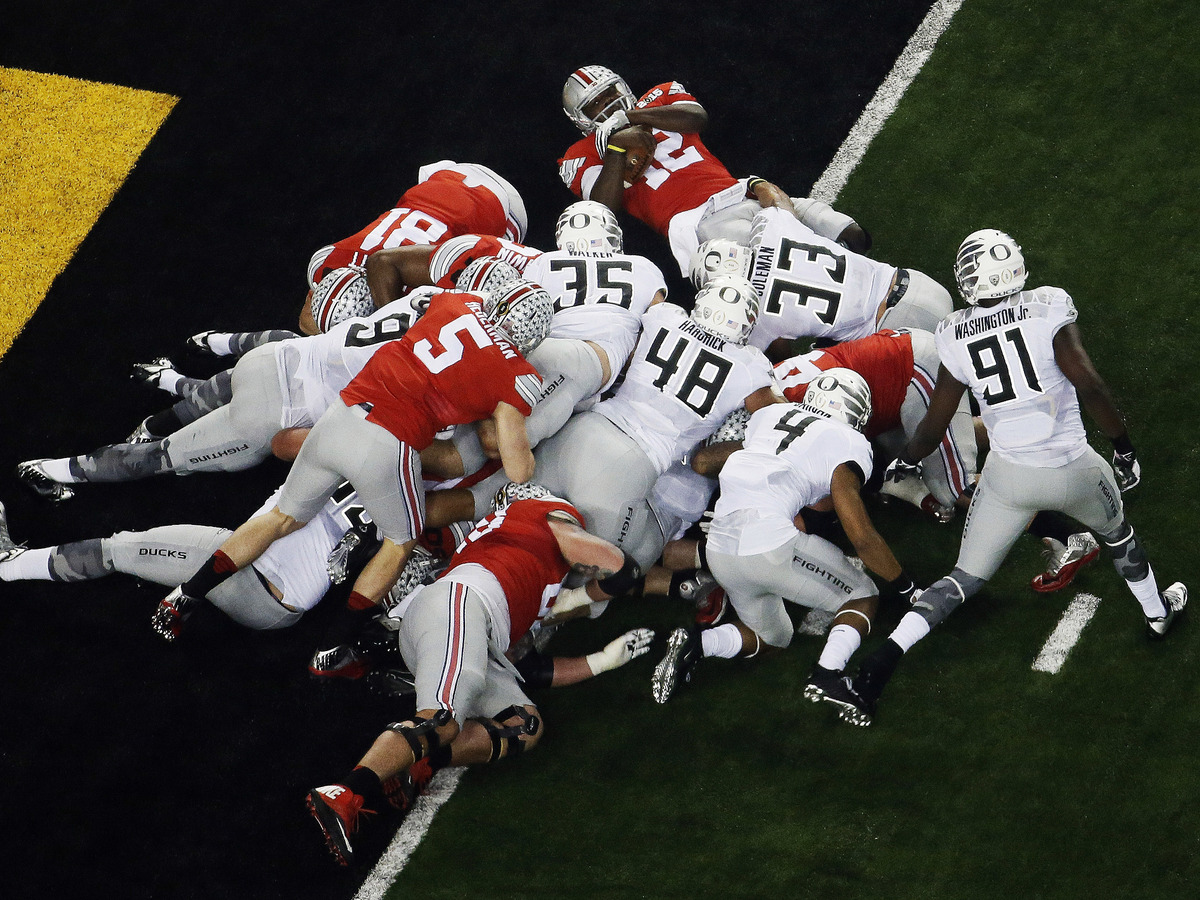 A game between two of the most high-powered offenses in college football, came down, time and again, to which team could grind out one or two yards.

Ohio State converted all through fourth down attempts and eight of 14 third down tries, while the Buckeyes defense stopped one University of Oregon drive just inches from the goal line. College football's first playoffs is sending a trophy home to Columbus following the Buckeyes' 42-20 win.

It's the Buckeyes' eighth national title, and their first since the 2002 season.

Ohio State was led by Ezekiel Elliott, who ran for 246 yards and four touchdowns. 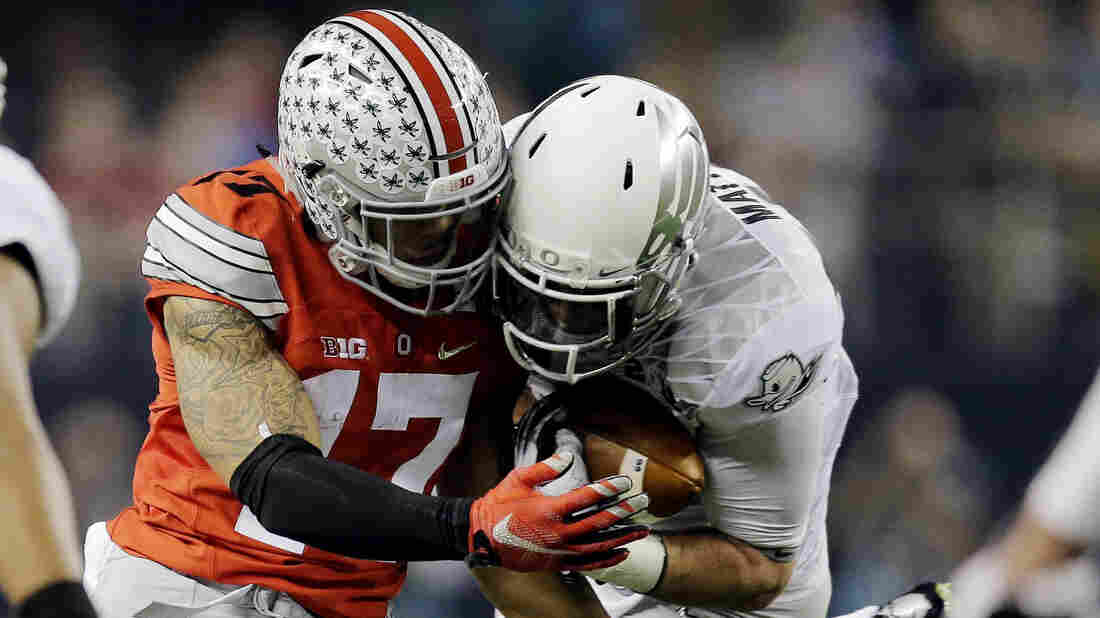 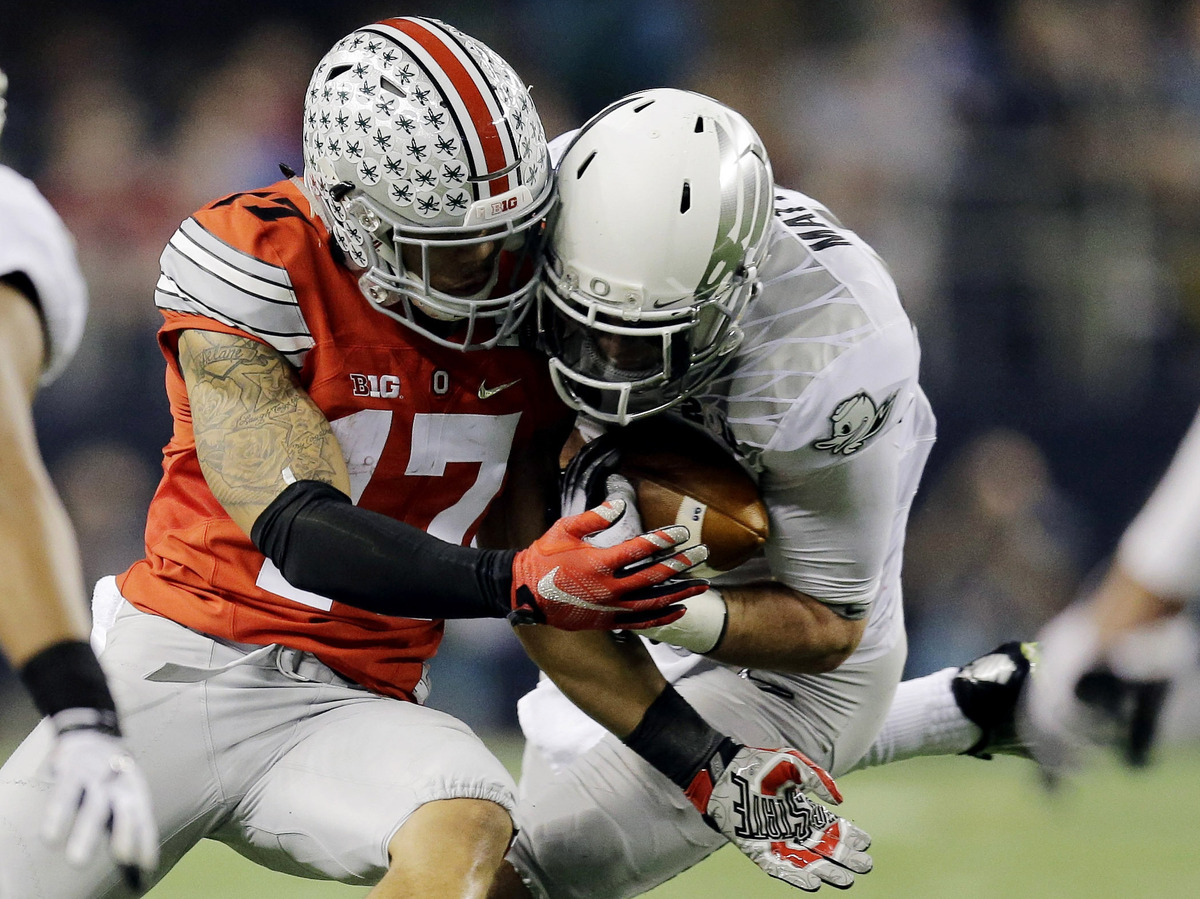 Oregon's Danny Mattingly intercepts a pass intended for Ohio State's Jalin Marshall on Monday during the second half of the NCAA college football playoff championship game.

The Ducks collected four turnovers (to one meaningless interception for Ohio State), but Oregon's high-flying offense couldn't get enough yardage to make them count, getting nothing on five straight drives in the first half.

In what likely will be his last game, Heisman-winning quarterback Marcus Mariota threw for 333 yards and two touchdowns, but couldn't collect the win. 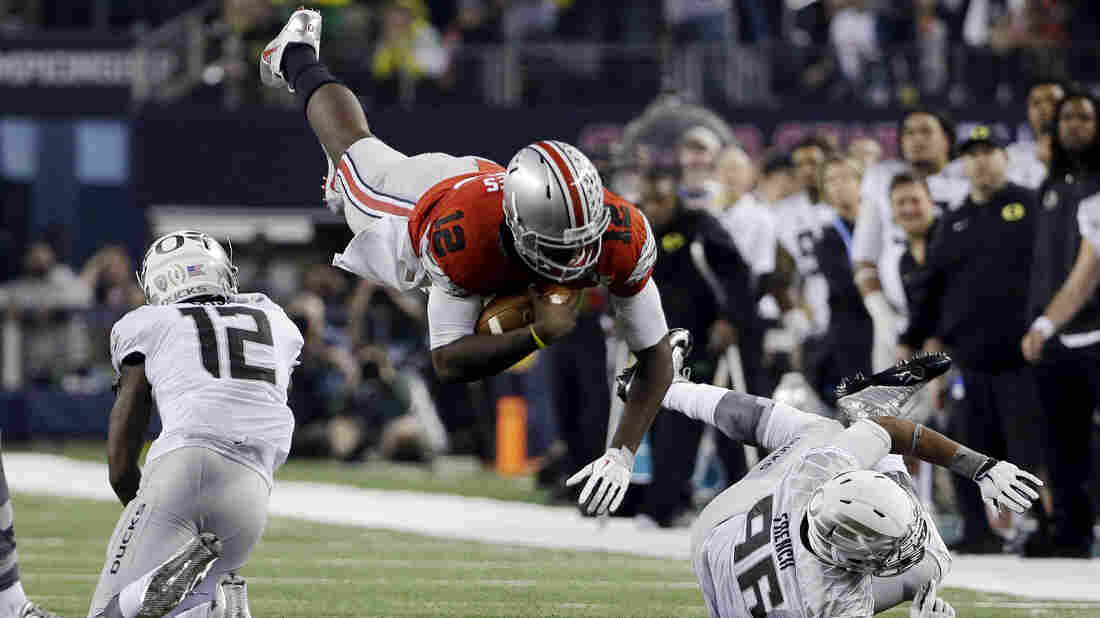 Ohio State quarterback Cardale Jones dives for a first down during the second half of Monday night's game. David J. Phillip/AP hide caption 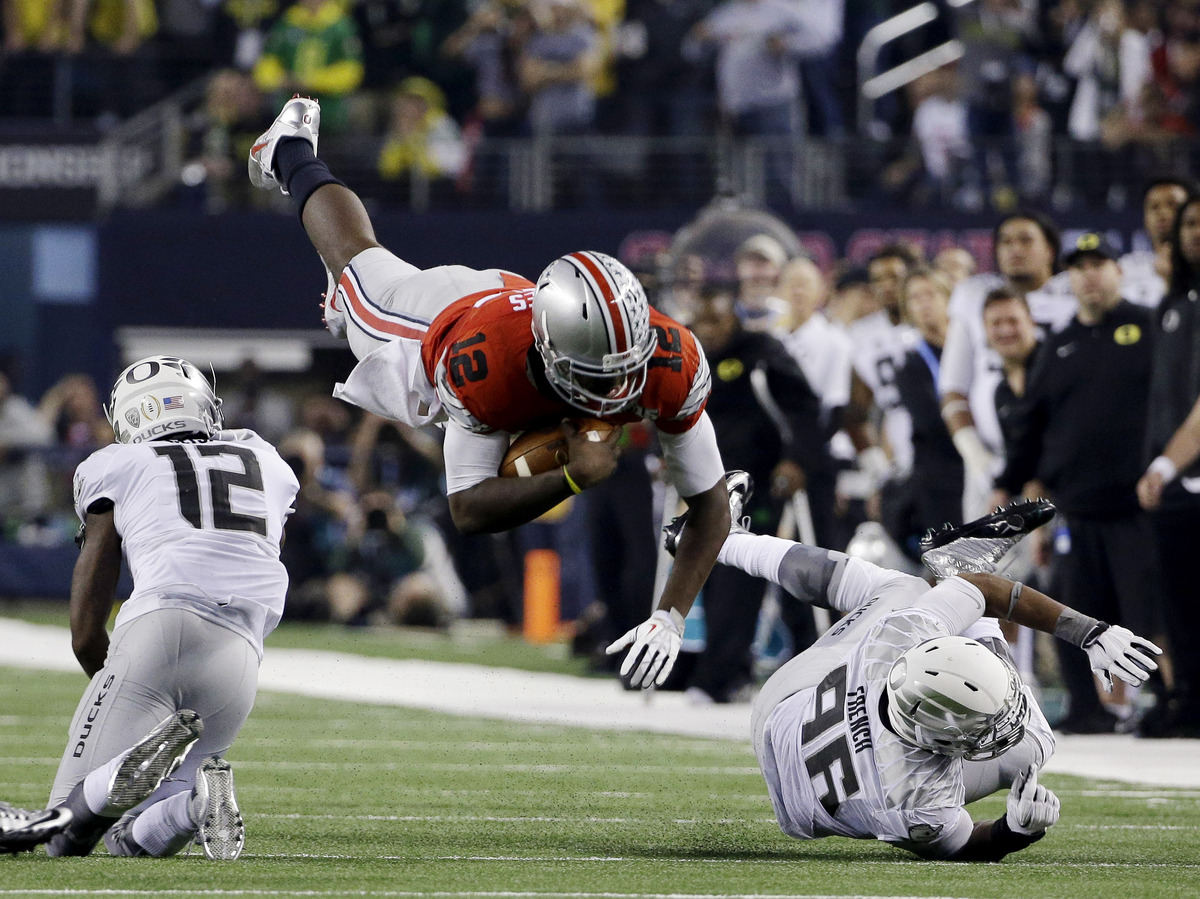 Ohio State quarterback Cardale Jones dives for a first down during the second half of Monday night's game.

Game preview: College football will crown the winner of its first-ever Playoff National Championship Monday night. In what many expect to be a high-scoring contest, Oregon is favored to beat Ohio State by nearly a touchdown. The game starts at 8:30 p.m. ET on ESPN.

So, who will win? Feel free to sound off in the comments section below. For now, we've rounded up interesting story lines about the matchup:

-- Ohio State is undefeated against Oregon (8-0). But, Ducks fans can note, Oregon has beaten OSU before in a championship debut: the first-ever NCAA basketball national championship tournament, when the Ducks (or, the Tall Firs, as they were called) beat the Buckeyes, 46-33, back in 1939.

-- Oregon is second in the nation in scoring, with 47.2 points per game. Ohio State was fifth, with 45 points.

-- The championship would signal a return to glory for Ohio State, which won the last of its seven national titles 12 years ago. For Oregon, it would be the finishing touch on the school's revamping of its athletics department that has roots in 1996.

-- The game brought an awkward moment to today's class photo in Sunbury, Ohio, where a lone boy decided to wear an Oregon jersey. All of his classmates wore Ohio State's red jerseys — as a photo tweeted by Big Walnut Intermediate School's principal shows.

-- Both teams have forced 30 or more turnovers (including the postseason). The NCAA notes two stars on defense: "Oregon safety Erick Dargan ranks third in the FBS with seven interceptions. Ohio State defensive end Joey Bosa ranks second in the FBS with 14.0 sacks."

-- "The Buckeyes will be led by third-string redshirt-sophomore quarterback Cardale Jones, who will be making just his third collegiate career start," Ohio State's The Lantern notes. The newspaper adds that Ohio State's sophomore running back Ezekiel Elliott "has not been held under 100 yards or without a touchdown since a 31-24 win over Minnesota on Nov. 15."

-- If ESPN's broadcast by Chris Fowler and Kirk Herbstreit doesn't suit you, the network has announced a "megacast" of a dozen options you can tailor to your liking. They range from alternate camera angles and analysis to hearing each school's radio broadcast coverage.

-- The game will be played at AT&T Stadium in Arlington, Texas. As a New York Times story notes, fans will be able to buy alcohol at the venue — including "a Cowboyrita, the signature drink at the Dallas Cowboys' home field, made with 100 percent blue agave tequila."