Accessibility links
X-Rays Open Secrets Of Ancient Scrolls : The Two-Way Scientists have used a particle accelerator to read ancient scrolls without unrolling them. The breakthrough could potentially be used to decipher hundreds of texts. 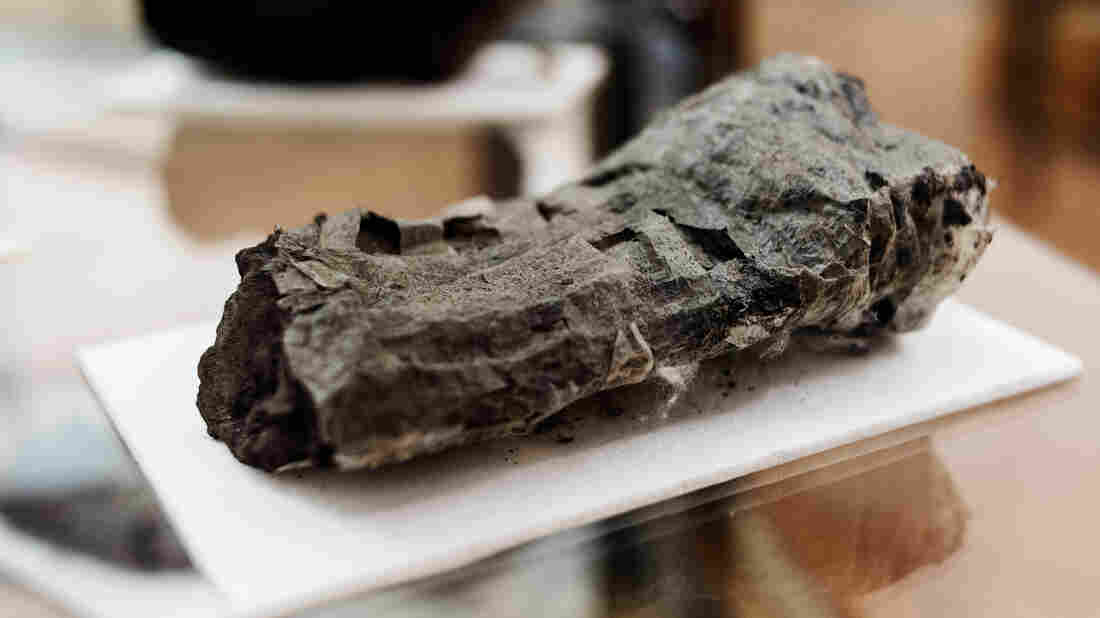 The ancient scrolls look and feel more like blocks of charcoal. A new technique gives a peek inside. Salvatore Laporta/AP hide caption 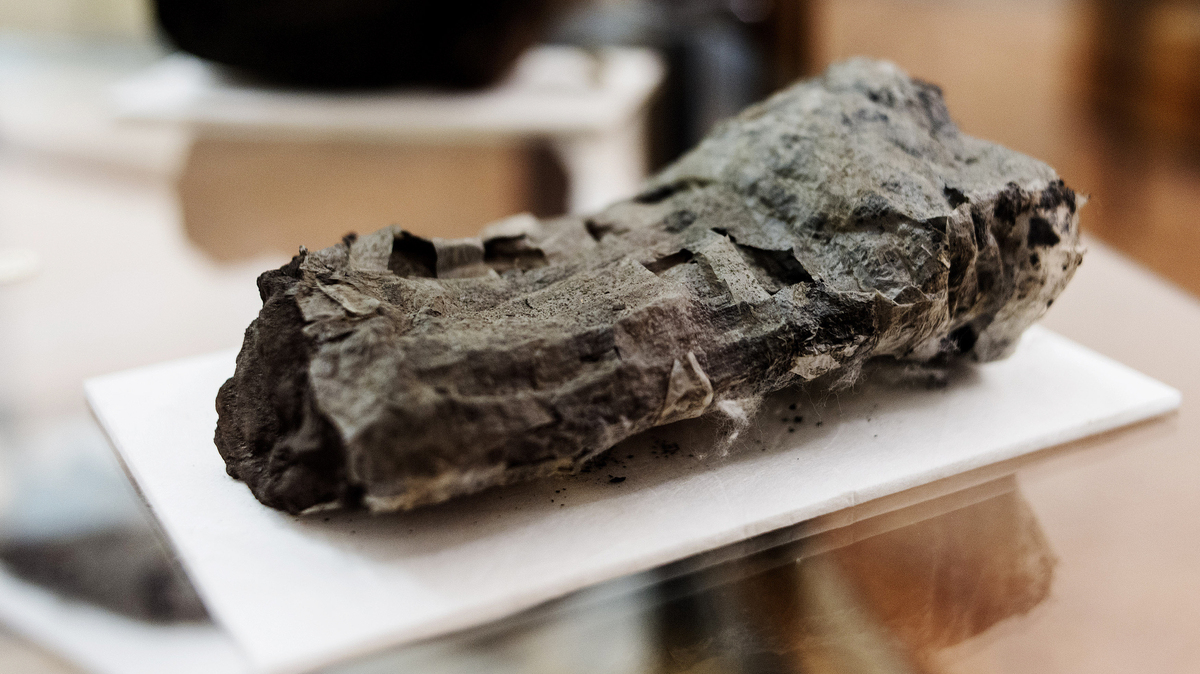 The ancient scrolls look and feel more like blocks of charcoal. A new technique gives a peek inside.

Researchers in Europe have managed to read from an ancient scroll buried when Mount Vesuvius erupted in 79 A.D. The feat is all the more remarkable because the scroll was never opened.

The Vesuvius eruption famously destroyed Pompeii. But it also devastated the nearby town of Herculaneum. A villa there contained a library stacked with papyrus scrolls, and the hot gas and ash preserved them.

"To be honest, being from Kentucky, they look like pieces of coal," says Brent Seales, a computer scientist at the University of Kentucky who has held some of the scrolls. "You look at the end and you can see the circular markings of how it's been rolled, but it looks more like the growth marks of a tree."

Researchers want to unroll these scrolls, but opening them is more like peeling the flaky skin of an onion.

"When you try to pull one layer off, it just breaks away from the rest, and so you have 10 million fragments after you've peeled it away in that manner," Seales says.

Roughly 1,800 scrolls were unearthed back in the 1750s. Seales says only about 300 have survived efforts to read them. 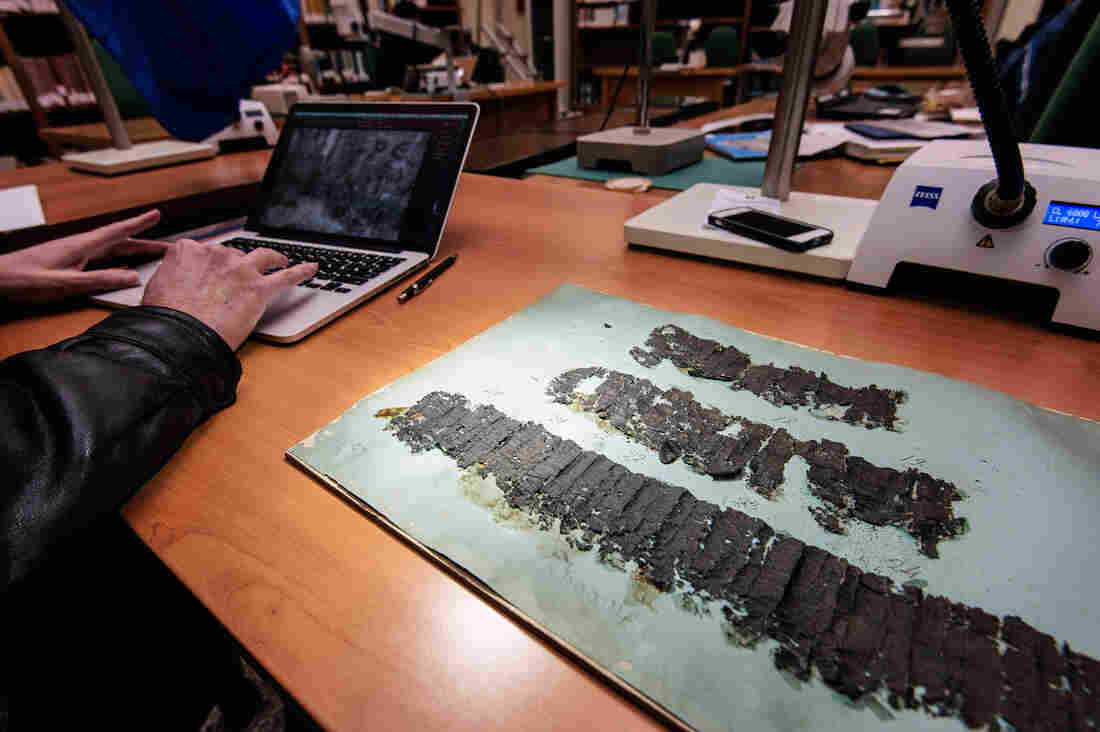 Even the most careful unrolling of the scrolls leads to their destruction. Salvatore Laporta/AP hide caption 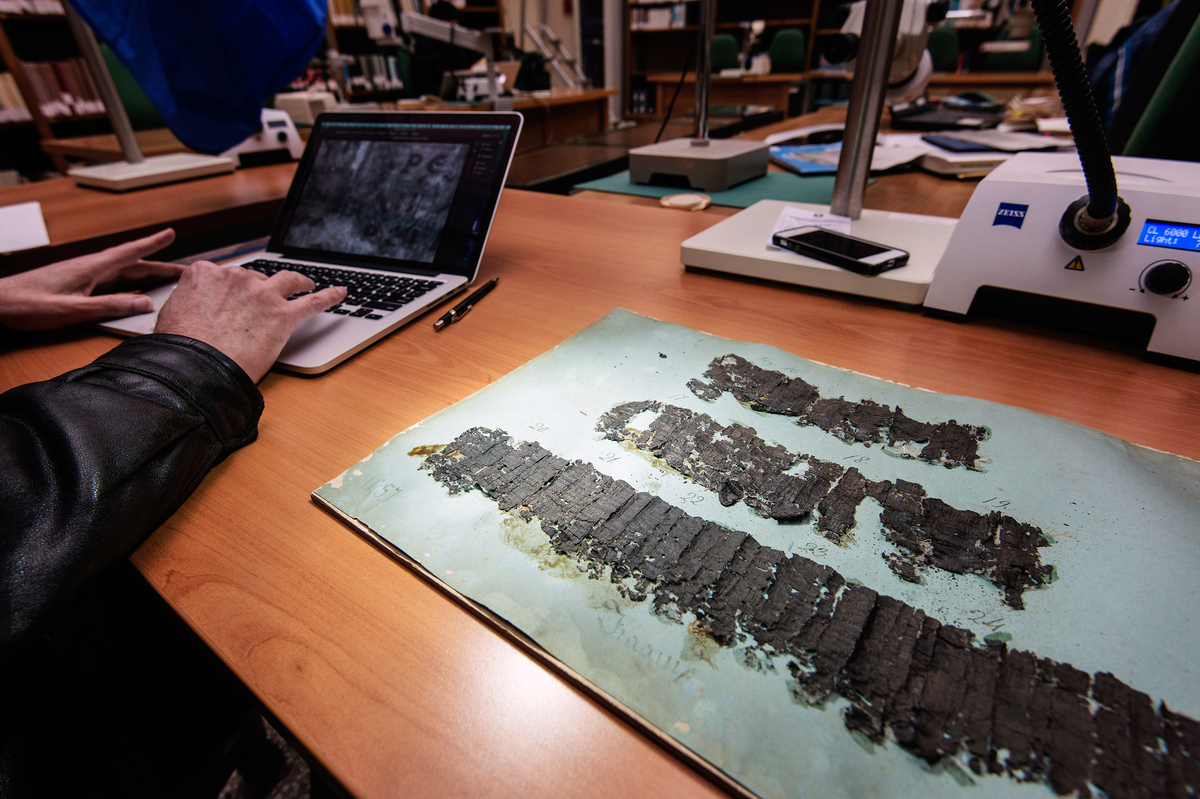 Even the most careful unrolling of the scrolls leads to their destruction.

And that's why this latest finding is such a breakthrough. The researchers used a particle accelerator in France to bombard a rolled-up scroll with X-rays. These X-rays were so sensitive, they detected changes in thickness where ink had been used to write letters. The team could make out the entire Greek alphabet inside the tightly wound scroll.

"Capturing those letters, you know, that's pretty amazing in itself," says Seales, who has worked with the team but was not directly involved in this latest effort. The work is published in the journal Nature Communications.

From just the letters, the researchers believe the scroll is in the handwriting of the philosopher Philodemus. He was of the school of Epicureanism, which stressed enjoyment of the pleasures of life, according to Seales. Several other scrolls in the collection have been identified over the years as works by Philodemus.

The researchers can't read whole words yet. And that's where Seales' computer-scientist chops will come in handy. He thinks he can make a program that can distinguish which letters belong to which layers, so the scrolls can finally be deciphered.

"Yeah, I do believe that with this remarkable breakthrough, we're going to get there," he says.