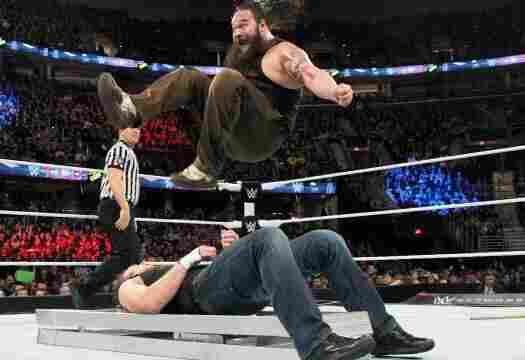 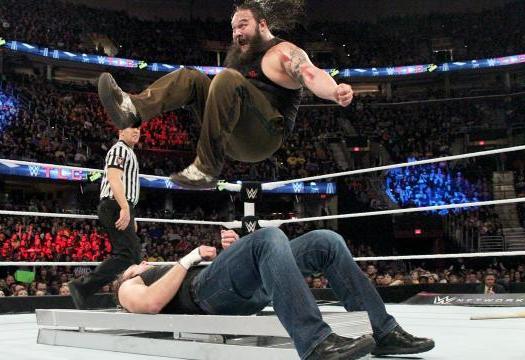 Two former World Wrestling Entertainment fighters are suing the company, alleging that it ignored signs of brain damage and injuries.

The lawsuit, dated Jan. 16, was filed by Vito "Big Vito" LoGrasso and Evan Singleton, who wrestled under the name "Adam Mercer."

The suit alleges that LoGrasso has sustained serious neurological damage as a result of wrestling. He says he has headaches, memory loss, depression and hearing impairment. Singleton also says he has tremors, convulsions and migraines.

NPR has reported extensively on chronic traumatic encephalopathy, a progressive degenerative disease of the brain. It's been well-known to affect boxers; more recently, NFL players have been part of the CTE conversation. Associated with repeated concussions, it's linked to depression, memory loss, impulse control problems and dementia.

It's also becoming a higher-profile issue within the world of wrestling. Back in 2007, Chris Nowinski, a former WWE wrestler, founded The Sports Legacy Institute, a nonprofit organization that focuses on CTE. WWE Executive Vice President Paul Levesque sits on the organization's board. The same year the organization was founded, wrestler Chris Benoit murdered his wife and 7-year-old son, then hanged himself. The SLI requested that the family allow it to study Benoit's brain and shortly thereafter released neuropathological tests indicating he indeed suffered from CTE. In 2013, WWE said it was giving $1.2 million to the Sports Legacy Institute to research CTE treatment.

Nowinski speaks to the full WWE roster once a year to discuss concussion treatment and prevention. He says he believes the culture among wrestlers has changed since he was with the company. (His last match was in 2003.) He says it's not inevitable for wrestlers to be seriously injured: "When done properly, no one should ever get hurt, and no one should be hit in the head."

WWE sent NPR this statement via its legal counsel, Jerry McDevitt, regarding the lawsuit:

"This lawsuit is virtually identical to one filed by the same lawyers in Oregon, neither of which have any merit. WWE has never concealed any medical information related to concussions, or otherwise, from our Talent. WWE was well ahead of sports organizations in implementing concussion management procedures and policies as a precautionary measure as the science and research on this issue emerged. We will vigorously contest this lawsuit."

The previous lawsuit referred to was filed by Portland-based retired pro wrestler William Albert Haynes, aka "Black Jack Haynes," who wrestled with WWE between 1986 and 1988 and took the company to court, saying it refused to acknowledge the traumatic brain injuries fighters received.

In a conversation with NPR, Charles LaDuca, a lawyer for the firm representing LoGrasso and Mercer, said the Portland suit in fact opened a floodgate of other former wrestlers with similar complaints. "This is not an instance where one wrestler had several concussions and is trying to change the system," he says. "This is an ongoing epidemic problem that's rampant in major league sports generally."

LaDuca says certain moves that are encouraged by WWE are extremely dangerous, like the "chair shot," when a fighter takes a chair and smashes it over another fighter's head. "WWE deliberately creates and heightens the violence of these matches in order to heat up the audiences and increase the profits. They want more violence," he says.

Nowinski tells NPR the chair-breaking example is a sign of how the culture of wrestling has evolved. He says, "There was a time when, 20-30 years ago, everyone put their hand up on a 'chair shot.' And it would never hit you on the head. And it still looked devastating. What would happen is you'd put your hand up so it looked like you were trying to protect yourself ... and so it would smack your hand, and make a lot of noise, but never hit your head ... and then [in the late '90s] it didn't even start in WWE, it started in one of the rival places that was trying to be tougher, where the guys stopped putting their hands up, to prove they where tough. And actually let themselves get hit in the head."

Nowinski says no one was really aware of the risks. He says, "Now the culture is back to the old culture in which this is about our longevity. We all understand this is not a real fight; let's all be professional."

In a conversation with NPR, WWE lawyer McDevitt calls the suit "regrettable," as he says WWE has been "way ahead of the curve" when it comes to concussion management and has been for years." He says WWE has brought in some of the best concussion specialists in the country available to work with them on the issue.

"At the arenas, if there is an event that leads to a suspected concussion, we can do on the spot, on the date of event testing to measure whether there's any kind of degradation in mental function emblematic of a concussion," McDevitt says. And he refers back to training athletes to avoid concussions. "Some of the former practices we used to use before some of the science emerged have been outright prohibited." He, too, cites the folding metal chair stunt, which has been prohibited by WWE.

McDevitt says he suspects the new lawsuits are closely related to the recent NFL suits: "Ever since the NFL chose to go the route of settling their cases, this class-action bar of plaintiffs have been suing anybody and anything involved in sports ... they just don't fit. They're a bunch of cookie-cutter allegations they make. We intend to respond differently."

LaDuca insists that the lawsuit is about WWE downplaying the seriousness of the head injuries.

The WWE, he says, was not giving wrestlers adequate rest time and made them perform too often. He adds, "The WWE discouraged them from seeking additional appropriate medical help, for example, seeing a neurologist. The WWE would clear these wrestlers to continue wrestling after an inadequate rest time. Downplaying these injuries makes the damage worse."