Accessibility links
U.S. And India Announce New Ties On First Day Of Obama's Trip : The Two-Way President Obama will be in India for three days; he is the first president to visit the country twice while in office. Obama and Prime Minister Narendra Modi also discussed defense and climate change.

President Obama announced Sunday that the U.S. and India have made progress on civilian nuclear trade. In a joint news conference with Prime Minister Narendra Modi in New Delhi, Obama said the countries had agreed to more cooperation in other areas as well, including defense and climate change.

Obama arrived in India Sunday for a three-day trip, and he and first lady Michelle Obama were greeted by Modi at the airport. The warm welcome — a hearty hug between Obama and Modi — was a "departure from protocol," India Today reports.

Obama is the first U.S. president to visit India twice while in office, a point he brought up during the news conference.

The two leaders have reached an understanding of how the issues of nuclear liability and tracking of nuclear material will be handled, NPR's Scott Horsley, who is traveling with the president, reports.

Both of those things "should make it easier for U.S. firms to help India in developing its nuclear power base," Scott says, adding that White House counselor John Podesta related other moves on carbon-free power. "Modi understands there's no sustainable development without addressing climate change," Scott says.

President Obama is honored to be back in #India to celebrate Republic Day and to begin a new chapter in the US-India partnership. Jai Hind!

It is Obama's second visit to India as president, "a fresh bid to make India an enduring strategic partner," NPR's Julie McCarthy tells our Newscast Desk. "U.S.-India relations have been adrift in recent years, and India's foreign ministry spokesman said that they are working to 're-energize' ties between the world's two largest democracies." 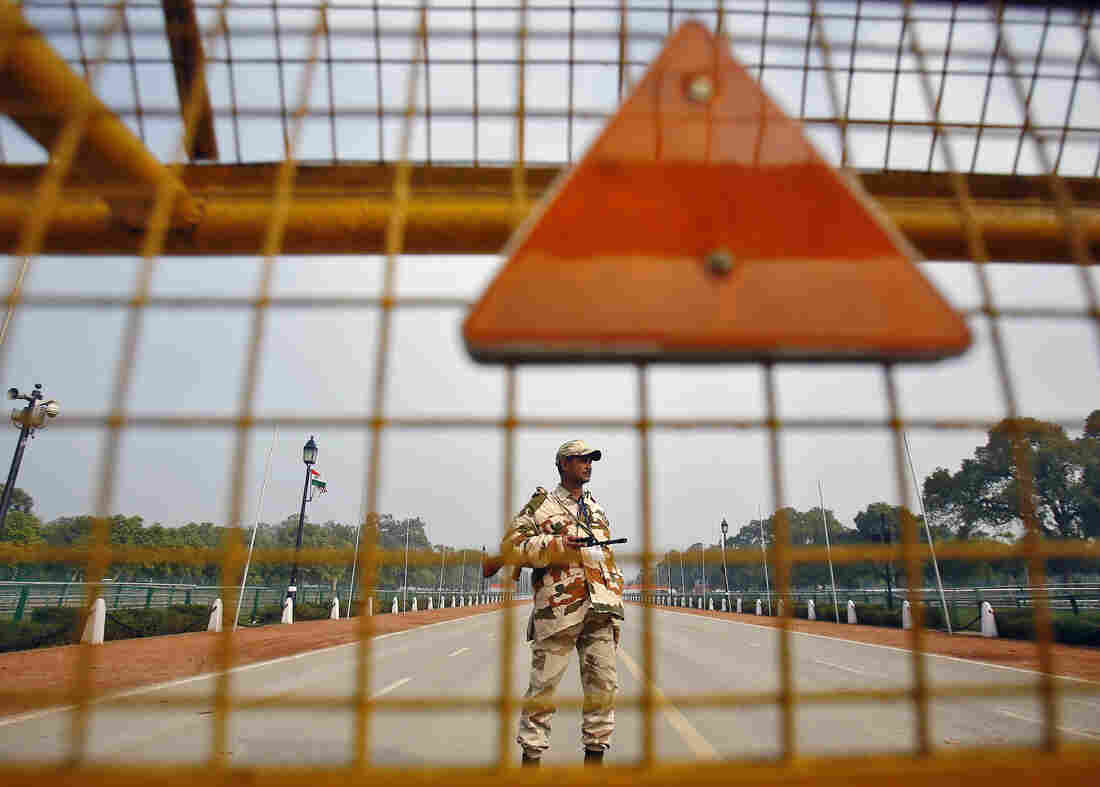 An Indian security personnel stands guard near India Gate ahead of the Republic Day Parade in New Delhi on Saturday. President Obama will attend the parade on Monday. Anindito Mukherjee/Reuters/Landov hide caption

Until last year, Modi was barred from coming to the U.S. over anti-Muslim riots in his state of Gujarat in 2002, McCarthy says.

"No court ever indicted Modi," she reports, "and the president and the prime minister have set aside any misgivings to strike up what appears to be a warm rapport."

Monday, Obama will be Modi's chief guest at the Republic Day Parade. The parade celebrates the adoption of India's constitution, The Washington Post explains, and is a "stunning, hours-long spectacle that showcases India's culture, military, states and federal programs."

There is extra security in place across the city, including at airports, ports and railway stations, the BBC reports. "Thousands of security personnel have been deployed in Delhi along with some 15,000 cameras," the network says.

Obama will cut his trip short, however, due to the death of Saudi Arabia's King Abdullah. Instead of visiting the Taj Mahal on Tuesday, he will leave for Saudi Arabia to pay his respects.

India Today is blogging live updates of the president's visit.