Accessibility links
Backed By U.S.-Led Coalition, Kurds Take Kobani From ISIS : The Two-Way The Syrian town was not seen as militarily important, but Islamic State propaganda bumped it up the list of targets. 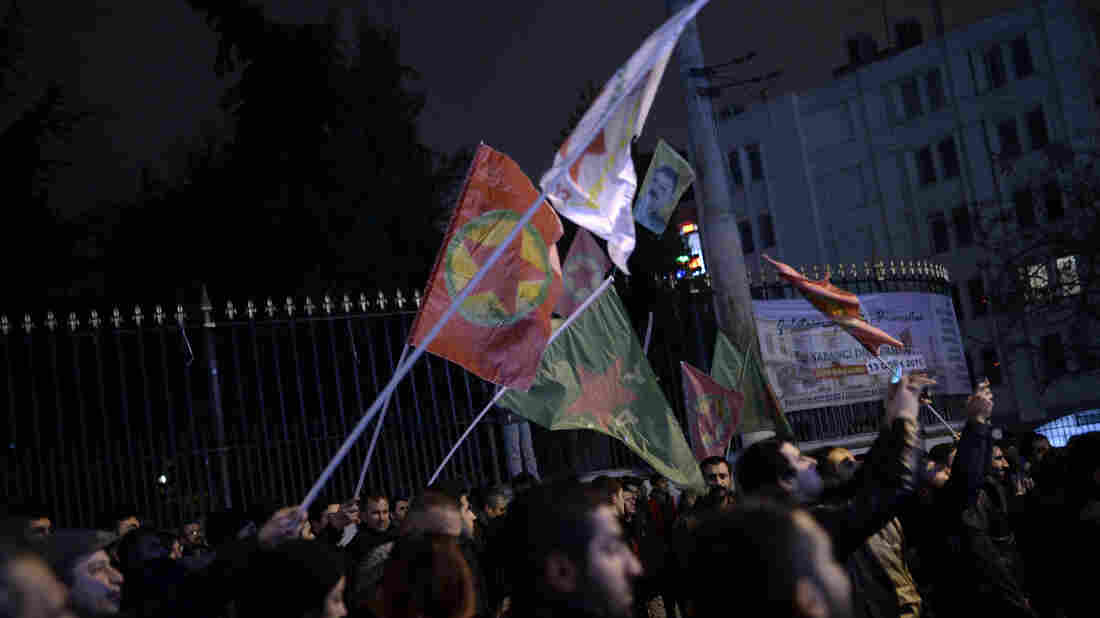 Kurds in Istanbul wave the flags of the outlawed PKK on Monday after Kurdish fighters backed by U.S.-led airstrikes pushed the Islamic State group out of Kobani, Syria. AP hide caption 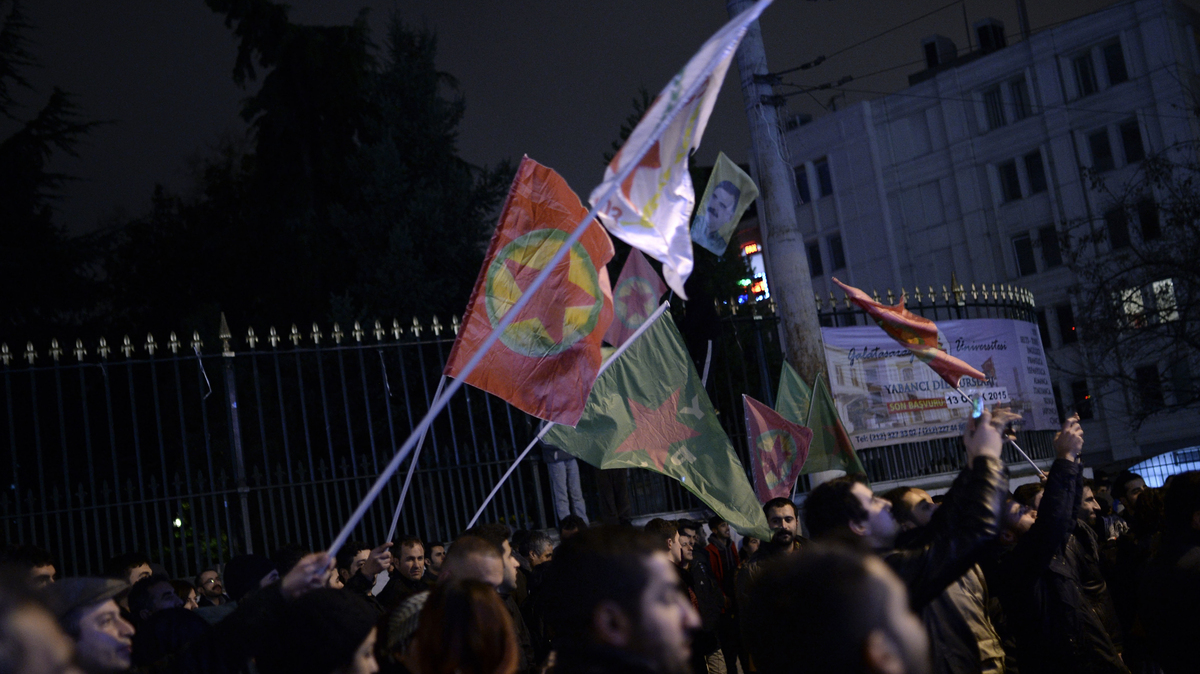 Kurds in Istanbul wave the flags of the outlawed PKK on Monday after Kurdish fighters backed by U.S.-led airstrikes pushed the Islamic State group out of Kobani, Syria.

Kurdish militiamen have wrested control of the Syrian town of Kobani from Islamic State militants, according to activists. Syrian-Kurdish refugees in neighboring Turkey have been celebrating the apparent liberation of their town.

Kobani represents the first instance that the U.S.-led coalition against the Islamic State, also known as ISIS, has openly coordinated with a local fighting force on the ground in Syria. Syrian-Kurdish militiamen bolstered by rebel Free Syrian Army battalions and Iraqi Kurdish peshmerga received airdrops of American weaponry and major air support.

Middle East analyst Aymenn Jawad al-Tamimi, a Shillman-Ginsburg fellow at the Philadelphia-based Middle East Forum, notes that the Islamic State "invested a large amount of manpower and weaponry to persist on the Kobani front, while other military fronts were virtually ignored."

The Syrian Observatory for Human Rights, a monitoring group based in Britain, says the Islamic State sent in repeated reinforcements throughout the battle, even making a last-ditch effort to hold its line with dozens of fresh recruits under the age of 18.

Yet what is striking, Tamimi says, is how long the jihadi group was able to stay in the ring in the face of hundreds of coalition airstrikes.

How Kobani Became A Target

Just over four months ago, Kobani was hardly on the map. At the onset of the Islamic State incursion, the well-armed extremist group looked poised to overrun the town.

At the time, Secretary of State John Kerry said saving the town was not a strategic objective.

But Kobani soon became a symbol worth much more than its size.

On the propaganda front, the Islamic State released footage showing British journalist John Cantlie "reporting" from Kobani one month into the battle. In the video, the journalist — who has seen five of his fellow hostages executed — mocks the U.S. air campaign and brags that all he can see in the town are mujahedeen. He asserts that the battle is rapidly coming to a close.

Soon, American airstrikes in Syria were concentrating heavily, even disproportionately, on Islamic State targets in Kobani.

In the end, the defeat of ISIS in Kobani took four months of heavy guerrilla fighting on the ground and U.S.-led strikes from the sky. Nearly 1,000 Islamic State militants and more than 300 Kurdish fighters were killed, according to the Syrian Observatory.

Syrian rebel brigades played an important role, according to Syrian-Kurdish activist Nizar Mistefa. Yet he notes that wider Syrian-Kurdish relations have always been strained and fraught with tension. According to Tamimi, Kobani represented a localized partnership, and any U.S. effort to combat ISIS in an offensive capacity elsewhere will depend on the ground force in that area.

If victory in a small border town took four months, Tamimi asks, "How long, therefore, would it take for a rebel force to launch offensives to retake major towns from IS in Syria?"

The Pentagon's Central Command says the loss of Kobani has "denied [ISIS] one of their strategic objectives."

The Islamic State is already downplaying the significance of Kobani and shifting its forces to try to get a quick win under its belt. Even as Kobani was falling, the Syrian Observatory reported that the Islamic State was redeploying its troops to other battlefields in the country.

Just hours after Kobani fell, the Islamic State was engaged in fierce battles against Syrian regime forces in Deir Ezzor province, the location of the last government-held airbase in the country's east.