Accessibility links
Winter Blizzard Skirts New York City, But Still Walloping Northeast : The Two-Way The forecasts had called for up to 30 inches of snow for the city, but the historic storm failed to materialize. By early morning, however, parts of Massachusetts had gotten more than a foot of snow. 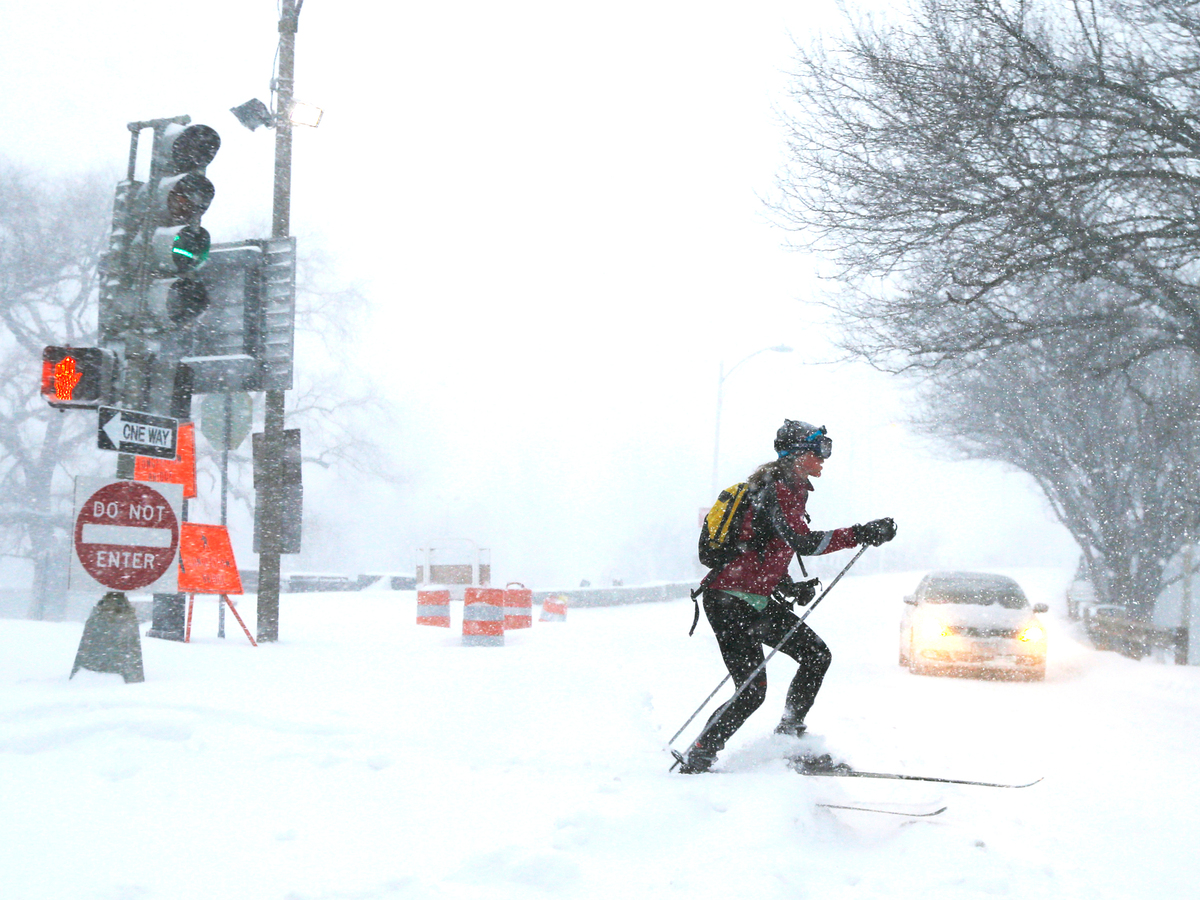 A woman cross country skis on snow-covered roads during a winter blizzard in Boston, Mass. Tuesday.

First the good news: Forecasts of a historic winter storm for the country's most populous city have failed to materialize.

Forecasters had called for up to 30 inches of snow in New York City, but as a new day dawned, meteorologists had downgraded the system to a winter storm from a blizzard and tempered their forecasts, saying when it was all done, the city would have about 12 inches of snow on the ground.

The dire forecasts — which predicted one of the biggest storms to hit New York — meant the city came to a standstill. The subway system was shut down, most flights out of JFK, Newark and La Guardia airports were canceled, and Mayor Bill de Blasio ordered all drivers off the road.

By 5 a.m. ET, the National Weather Service officially had declared its forecast a bust, saying the storm moved farther east than it had predicted.

"The science of forecasting storms, while continually improving, still can be subject to error, especially if we're on the edge of the heavy precipitation shield," the Weather Service said. "Efforts, including research, are already underway to more easily communicate that forecast uncertainty."

New York Gov. Andrew Cuomo announced that the travel ban for the New York City area had been lifted.

The bad news is that the storm is still dumping a great deal of precipitation farther north.

The AP reports that by early morning some parts of Boston had already gotten more than a foot of snow. Weather stations across the state were also reporting near-hurricane-strength winds.

"The weather service says a wind gust of 78 miles per hour was reported on Nantucket and a 72 mph gust was reported in Aquinnah on Martha's Vineyard.

"The high winds combined with high tide are expected to cause moderate to major coastal flooding."

So far, about 7,500 homes and businesses are without power.

We'll update this post with the latest throughout the day.

With the eye of the blizzard now just east of Nantucket, Massachusetts and Rhode Island are getting hammered.

The National Weather Service reports that Framingham, Mass., has recorded 30 inches of snow and Boston has received 18.2 inches.

A wind gauge in Nantucket measured a gust of 76 mph.

NPR member station WBUR, which is running a live blog, reports that more than 34,000 homes in the state are without power and a travel ban is still in effect for Worcester, Essex, Middlesex, Suffolk, Norfolk, Bristol, Plymouth, Barnstable and Dukes counties, as well as all of Interstate 90.

In New York, Mayor Bill de Blasio said the subway was slowly gearing back up. It's expected to be on a Sunday schedule this afternoon.

In Connecticut, Metro North, which carries commuters in and out of New York, was expected to begin operating later today.