Accessibility links
Former Vanderbilt Football Players Found Guilty In Rape Case : The Two-Way When Brandon Vandenburg and Cory Batey are sentenced in March, they face decades in prison. Vandenburg was also convicted of tampering with evidence and unlawful photography. 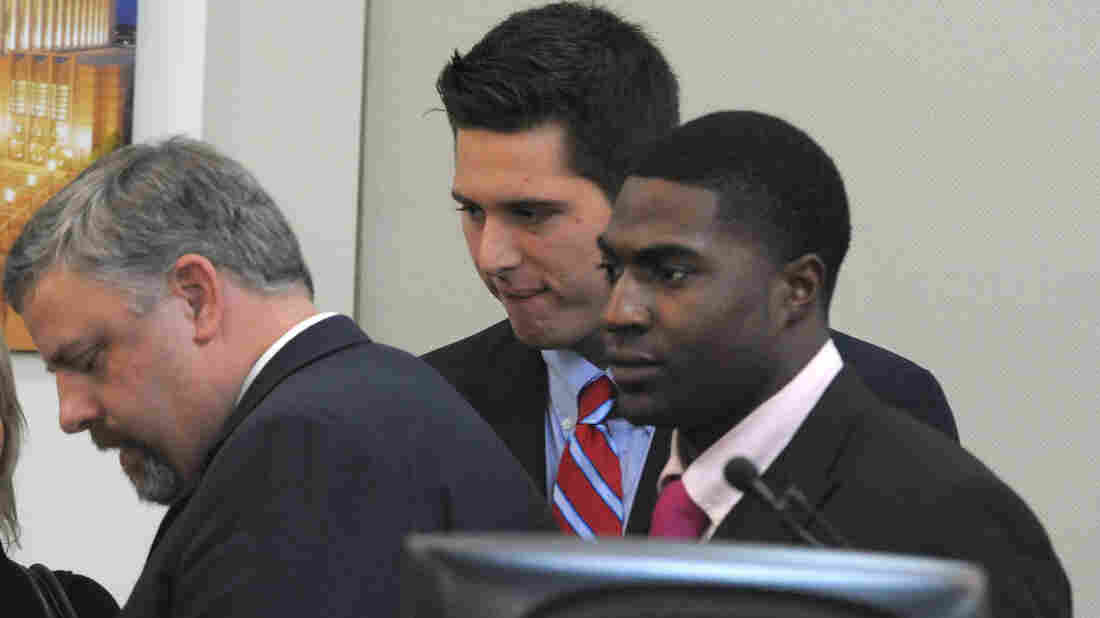 The defense gatherers after the jury was read the charges against Brandon Vandenburg, center, and Cory Batey, right, in Nashville Tuesday. The pair were found guilty of aggravated rape and aggravated sexual battery. John Partipilo/AP hide caption 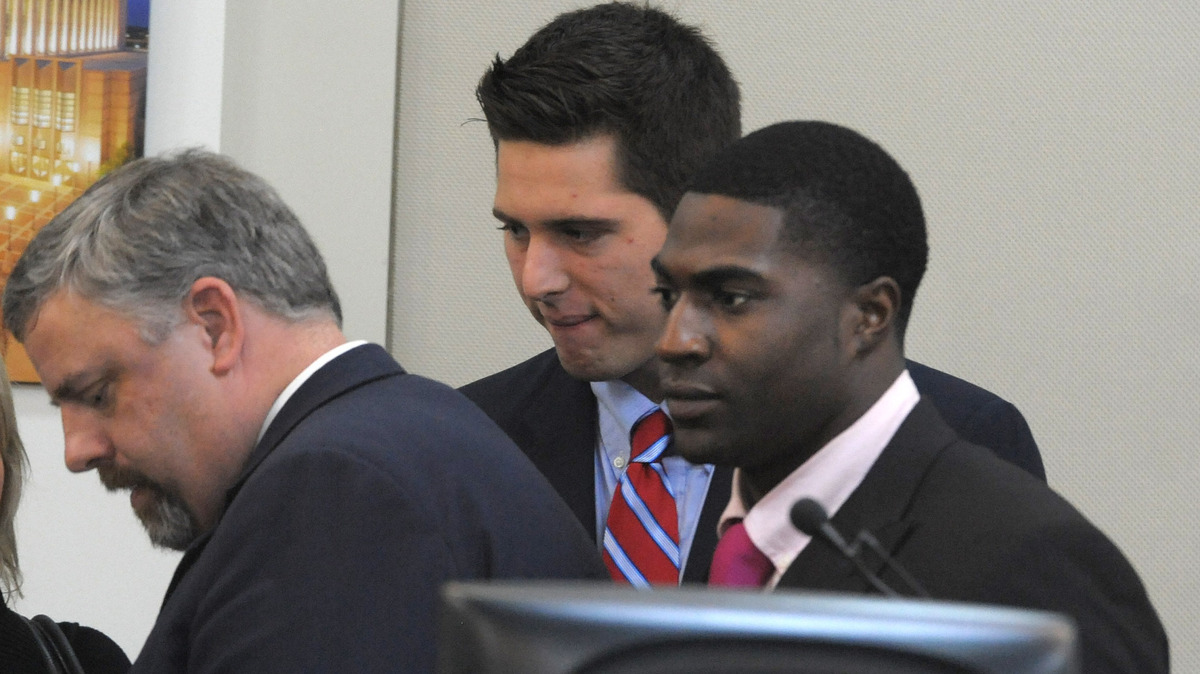 The defense gatherers after the jury was read the charges against Brandon Vandenburg, center, and Cory Batey, right, in Nashville Tuesday. The pair were found guilty of aggravated rape and aggravated sexual battery.

A jury has found two former members of the Vanderbilt University football team guilty of multiple counts of aggravated rape and aggravated sexual battery, in a case that stems from a 2013 assault in a dorm room. Others also face charges in the case.

Brandon Vandenburg and Cory Batey will face sentencing on March 6. Convicted of multiple felonies, the two could be sentenced to decades in prison.

"Prosecutors say Vandenburg brought an unconscious student back to his dorm room after a night of drinking in June of 2013. Batey testified that he was so drunk he didn't remember what happened. The victim said she didn't remember either, but the act was caught on cell phone video.

"As part of their unsuccessful defense, the players' attorneys blamed a campus culture of binge drinking and casual sex. A Vanderbilt spokesperson called the evidence presented at trial 'profoundly disturbing and utterly unacceptable.' "

Others indicted in the case include Jaborian McKenzie and Brandon Banks. Last week, McKenzie testified in the trial of Batey and Vandenburg, acknowledging that he hopes to receive a lesser penalty.

During the assault, some of those in the room took photos and video; when the victim in the case testified in court last week, she confirmed that the images are of her. She also said that she and Vandenburg had been dating prior to the assault, according to campus newspaper the Vanderbilt Hustler.

Today, the victim, who is now pursuing her doctorate at another school, issued a statement that was read by Assistant District Attorney Jan Norman.

The Tennesseean published it:

"Thank you to everyone who has supported me throughout this difficult process. I'm thankful that the criminal justice system will hold the defendants responsible for their violent crimes. The hard work of the law enforcement officers, prosecutors and victims' advocates who dedicated so many months of their lives to this case has made justice possible. I want to especially thank detective Jason Mayo, Sgt. Mike Shreeve, Detective Chad Gish, Deputy District Attorney Tom Thurman, Assistant District Attorneys Jan Norman and Roger Moore and victims' advocates Wanda Swann, Lt. Rochelle Berrios and Teresa Sharron. You are my heroes and I am so proud of and grateful for each of you.

"I am also hopeful that the publicity this case has received will lead to a discussion of how we can end sexual violence on college campuses. Finally, I want to remind other victims of sexual violence: You are not alone. You are not to blame."