Accessibility links
At Long Last: It's Super Bowl Sunday : The Two-Way The pre-Super Bowl week of hype — which ran the gamut from frivolous to ominous — finally ends and we can turn to what could be one of the closest, most exciting championship games ever. 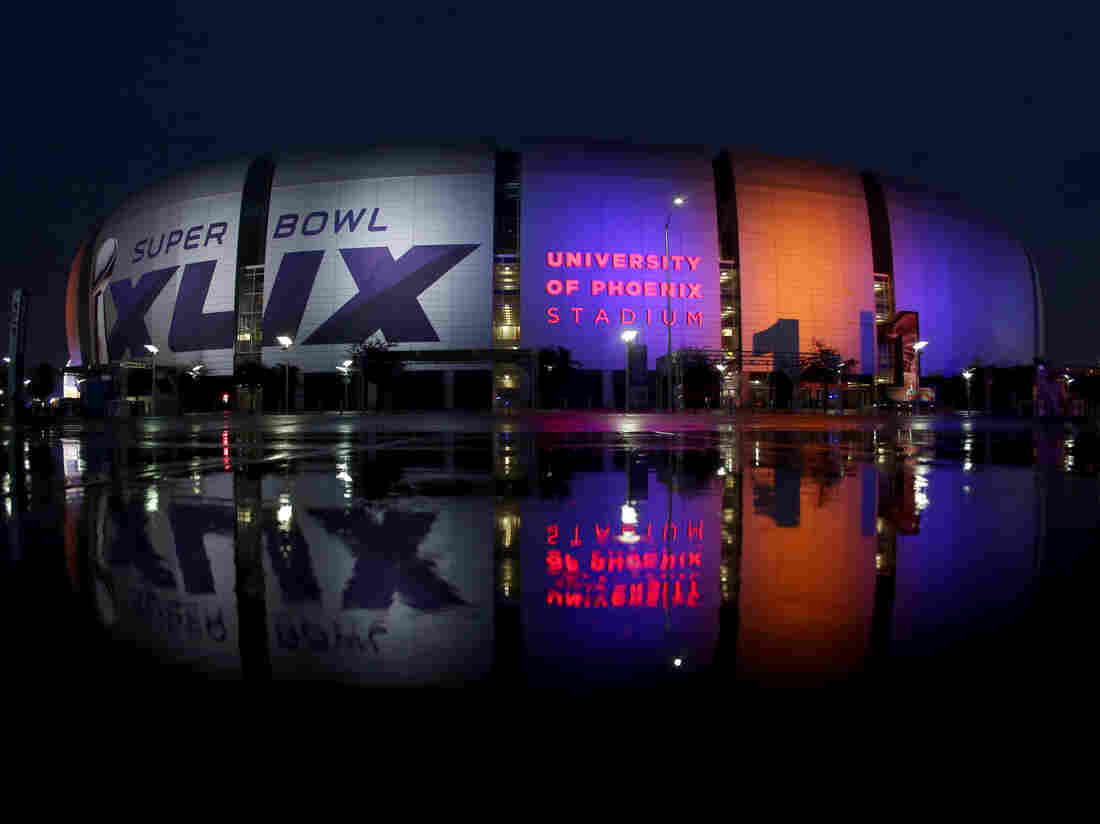 Football pundits say could be one of the closest, most exciting championship games ever. Charlie Riedel/AP hide caption 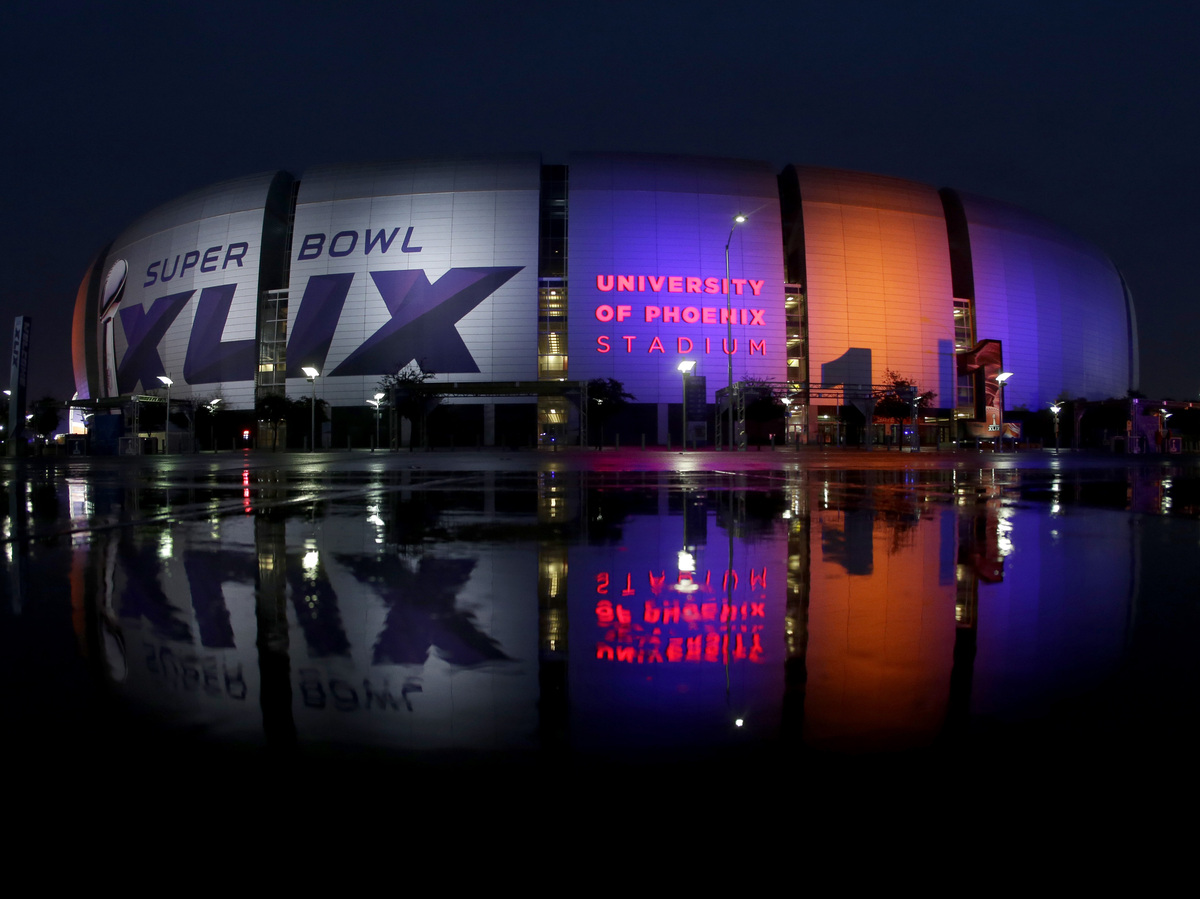 Football pundits say could be one of the closest, most exciting championship games ever.

That, according to a study by the Media Education Foundation, is how much live football action there was in last year's Super Bowl. And pretty much what we can expect Sunday when the New England Patriots take on the Seattle Seahawks in Super Bowl 49.

But even if actual football is just a sliver of the four-hour NBC broadcast, it's still a relief finally to be done with the pre-Super Bowl week of hype — which ran the gamut this year from frivolous to ominous.

There was talk and more talk about footballs losing air and Seattle running back Marshawn Lynch ceding air (time). There was Tom Brady's cold — he's better — and Bill Belichick's love of monkey puppets. Really Bill? You call that a "stuffed animal?"

There was NFL Commissioner Roger Goodell trying to move on from the league's "tough year," and reporters saying not so fast — a lot of questions are still unanswered.

But today all the talk ends, as attention turns to what football pundits say could be one of the closest, most exciting championship games ever.

There's been no shortage of statistics and scenarios explaining why the Patriots will win their fourth Super Bowl of the 2000s — the team's first since 2005 — and confirm their dynasty status. There's just as much fodder for why Seattle will become the ninth team to win back-to-back titles and secure its own dynasty label.

The teams have identical 14-4 records. In general, Seattle's offense has leaned more on the running of Lynch, whose "Beast Mode" nickname captures his churning, relentless style. New England's offense relies on the brilliant pocket passing of quarterback Brady.

Still, the Seahawks won a thrilling NFC Championship game thanks to quarterback Russell Wilson's dazzling throws in overtime; and New England running back LeGarrette Blount was beastly himself in the AFC title game, running for 148 yards and three touchdowns.

The point is, both teams can win throwing and running the ball. Although for each offensive unit, a formidable defense stands in the way.

Seattle is the current defensive gold standard, ranking first in a number of regular season statistical categories, including yards and points given up per game. The Seahawks' defenders are fast, physical and smart, and like to emphasize good fundamental tackling. That will be a key — the Seahawks accept that Tom Brady will complete passes and know they have to limit yardage after those completions.

New England's defense often has been overlooked due to Brady's brilliance. But the Patriots' D is loaded with playmakers — from massive nose tackle Vince Wilfork to Darrelle Revis, one of the NFL's best cornerbacks. New England was ranked eighth in scoring defense during the regular season, giving up only 19.6 points per game.

So with all this even-steven stuff, does anything tip the balance in favor of either team?

Here are a couple of tidbits that could make a difference. Or not:

• The Seahawks awesome defense was less so against opposing tight ends. During the regular season, Seattle gave up 11 touchdowns to tight ends, one of the highest amounts in the NFL. New England has Rob Gronkowski, the best tight end in football. Advantage: Pats.

• (This one courtesy of Judy Battista of NFL.com) Three of New England's four losses this season came against teams with quarterbacks who finished in the top eight in rushing yards by quarterbacks. The Seahawks' Wilson led the league for rushing by quarterbacks with 849 yards — the most of his career. Wilson is the most dangerous quarterback on the move, both running and throwing. New England's challenge is clear: Contain him.

So enough preview. Let's get to our 17 and one-half minutes of football with a not-so-bold prediction: The best I've seen out there is from former Baltimore Ravens head coach Brian Billick, a Super Bowl winner in 2001. He picks Seattle to win 24-21, but gives this explanation:

"This is truly a toss-up," Billick says. "I could give you five reasons why either of these closely matched teams will win. Ultimately, I'm just guessing."

And don't let anyone tell you differently.