Accessibility links
Pope Declares Salvadoran Archbishop Óscar Romero A Martyr : The Two-Way The archbishop was an outspoken voice against human rights abuses during the Salvadoran civil war. He was killed while giving mass in 1980. The pope's decree sets the stage for beatification. 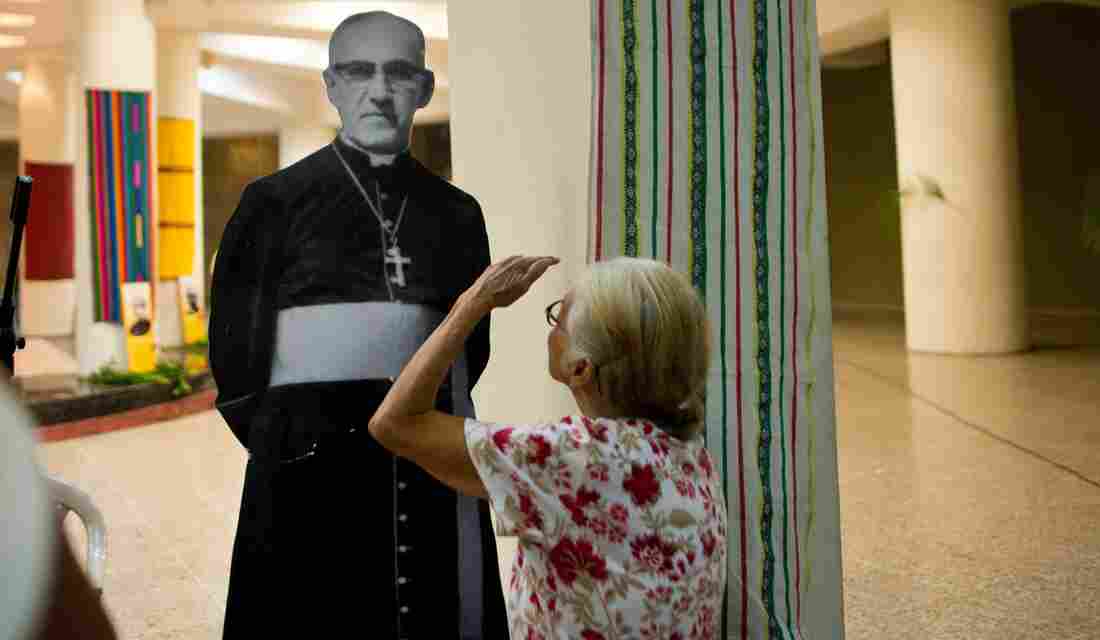 A Catholic faithful looks at a portrait of Monsignor Oscar Arnulfo Romero at his grave in the cathedral of San Salvador on March 24, 2014, during the commemoration of the 34th anniversary of his murder. JOSE CABEZAS/AFP/Getty Images hide caption

A Catholic faithful looks at a portrait of Monsignor Oscar Arnulfo Romero at his grave in the cathedral of San Salvador on March 24, 2014, during the commemoration of the 34th anniversary of his murder.

Óscar Arnulfo Romero, the archbishop of San Salvador in El Salvador, was an outspoken voice for justice during the civil war that tore that country apart between 1980 and 1992. In the end, he paid with his life: On March 24, 1980, he was shot while giving mass.

Romero spoke out against the Salvadorean army's brutal repression. In February 1980, he wrote an open letter to President Jimmy Carter, pleading that the U.S. discontinue aid to the regime.

He was assassinated the day after he called upon Salvadoran soldiers and security force members to not follow their orders to kill Salvadoran civilians. He said in a public sermon:

"I want to make a special appeal to soldiers, national guardsmen, and policemen: each of you is one of us. The peasants you kill are your own brothers and sisters. When you hear a man telling you to kill, remember God's words, 'thou shalt not kill.' No soldier is obliged to obey a law contrary to the law of God. In the name of God, in the name of our tormented people, I beseech you, I implore you; in the name of God I command you to stop the repression."

Romero delivered this homily the day before he was assassinated.

Last month a commission of Vatican theologians formally declared Romero a martyr, saying he was killed in odium fidei — "in hatred of the faith." Tuesday Pope Francis made the formal declaration. Beatification is the step before sainthood in the Catholic Church.

For years there's been speculation that Romero's beatification was on hold because of his association with liberation theology, an interpretation of Christianity that seeks liberation not just from sin, but from social and political oppression as well.

"The Vatican is doing what other institutions, and even society has already done" says Roberto Valencia, journalist for the Salvadoran newspaper El Faro, and author of Hablan de Monseñor Romero, a biography of the archbishop. "For years he's been seen as Saint Romero of the Americas. The house in which he lived the last year of his life, since the '80s, it started filling up with little plates thanking him — as if he were a saint — for miracles."

The pope approved three other priests to become martyrs: Polish priests Miguel Tomaszek and Sbignei Strzalkowski, as well as Italian priest Alessandro Dordi. They where murdered in Peru in 1991 by the leftist guerrilla group, the Shining Path.