Accessibility links
Jordan Reacts With Rage And Sorrow After ISIS Burns Pilot Alive : The Two-Way Jordan executed two prisoners in revenge for the horrific killing of the 26-year-old pilot, including the Iraqi woman who was sought by the so-called Islamic State for a hostage exchange. 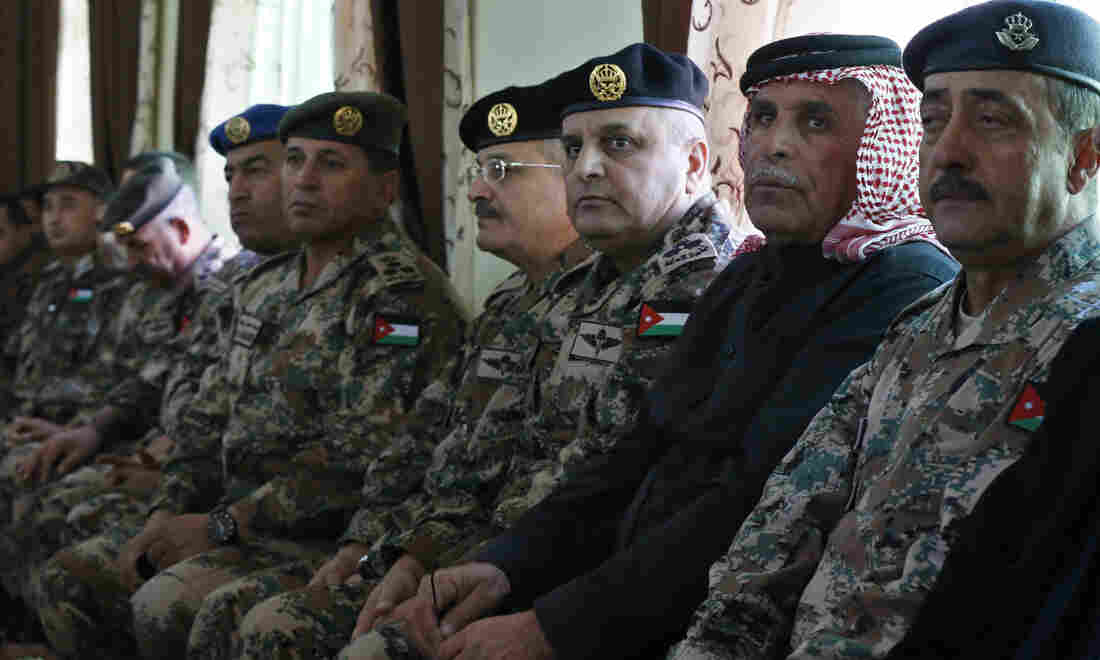 Saif al-Kaseasbeh (dressed in black), father of Jordanian pilot Muath al-Kaseasbeh, sits with senior officers of Jordan's military Wednesday at the headquarters of his family's clan in the city of Karak. Kaseasbeh is calling for revenge against ISIS for killing his son. Muhammad Hamed/Reuters/Landov hide caption 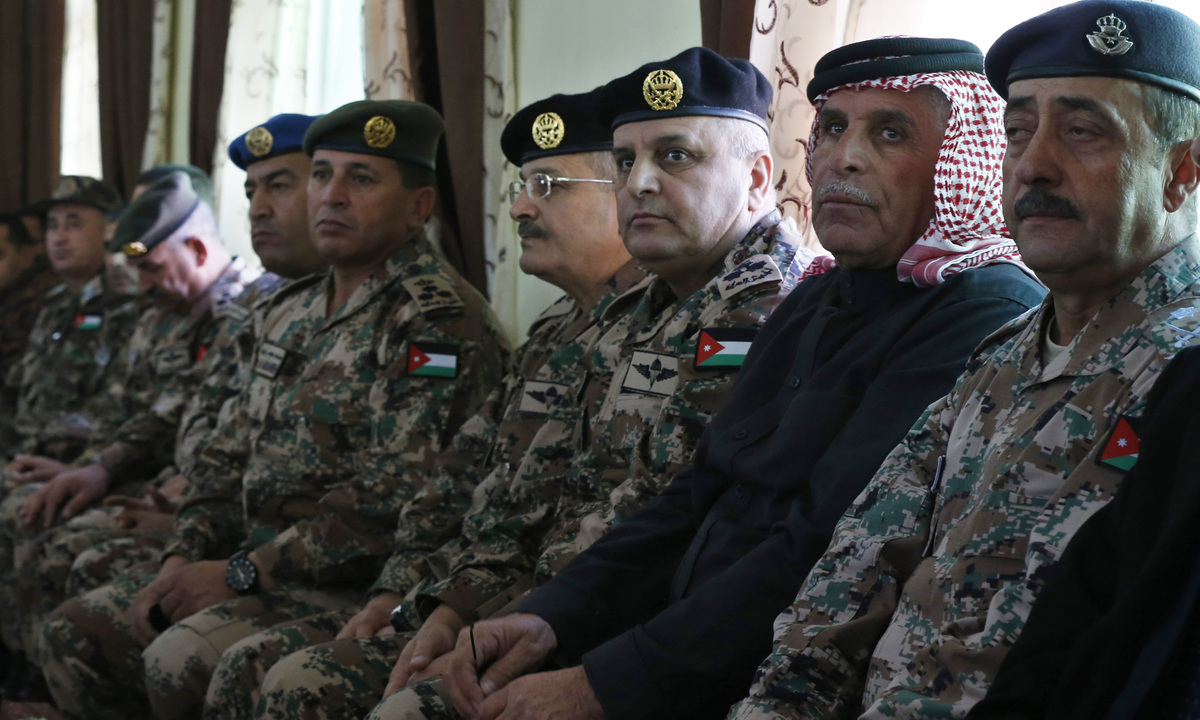 Saif al-Kaseasbeh (dressed in black), father of Jordanian pilot Muath al-Kaseasbeh, sits with senior officers of Jordan's military Wednesday at the headquarters of his family's clan in the city of Karak. Kaseasbeh is calling for revenge against ISIS for killing his son.

Responding to a horrific video that shows one of its pilots being burned alive, Jordan has executed two jihadists, including a prisoner whose freedom had been sought by the self-declared Islamic State militant group. The father of pilot Lt. Muath al-Kaseasbeh is calling for revenge.

In Jordan, reactions to the pilot's killing have ranged from sorrow to anger. Today, the pilot's father said that ISIS must be eliminated.

"The execution today is only a small part of our revenge," Saif al-Kasaesbeh said, according to NPR's Peter Kenyon. "My son's blood is worth more than [those two]." He added that the task is clear: "to destroy this terrorist group."

He urged Muslims to fight ISIS, saying, "they will destroy the image of our religion around the world."

"Muath al-Kaseasbeh's father says he feels great pain for the loss of his son. He calls on fellow Jordanians to be patient, but he also wants the perpetrators punished. The dawn executions of two convicted al-Qaida members are not enough, he says on TV network Al-Arabiya, adding, 'I expect the government to seek revenge for the blood of Muath against this horrid organization, which is far from the spirit of Islam.'

"When Muath was taken captive, his parents criticized Jordan's participation in the U.S.-led coalition against ISIS. The father told NPR that Jordan shouldn't be going on the offensive and attacking fellow Muslims. But his tone has changed in the wake of the grisly video which purports to shows his son being burned to death. Now he says the coalition must eradicate ISIS."

The brutal killing of Kaseasbeh shocked people in Jordan and elsewhere, as it followed a prolonged negotiation for his release in a prisoner exchange that also involved a Japanese journalist who was being held hostage.

Adding more uncertainty to the picture, Jordanian state TV reported Tuesday that the pilot had been killed on Jan. 3, a month before the graphic video was released.

"The news of the two executions was announced on Jordan's state television, which at all times has a picture of Kaseasbeh in the corner of the screen.

"One of those executed was Sajida al-Rishawi — a woman connected with a hotel bombing 10 years ago, whom the extremists had demanded as part of a putative prisoner swap, also involving Japanese hostage Kenji Goto, who was beheaded last week. The other executed militant was Ziyad Karboli, identified on TV as an al-Qaida operative convicted of killing a Jordanian citizen.

"In a televised address, Jordan's King Abdullah talked about the nation's grief, despair and anger at the death of a hero, and called on the country to stand together in the face of the threat. Other Jordanian officials have promised revenge."

The video of Kaseasbeh's death was released as King Abdullah was in Washington to meet with President Obama. He cut his visit to the U.S. short, but not before meeting with Obama and other American leaders.

Sen. Lindsey Graham, R-S.C., who was among those who met with Abdullah, said Jordan will not be withdrawing from the fight against ISIS. Here's what Graham said:

"All I can say is that the king feels like the gloves are off and that it is now time. ... You can't negotiate with these people, you are going to have to take it to them, and I think it's going to be more than Jordan. I mean, we're threatened by ISIL — that's what I'm trying to get members of Congress to realize. This is not a regional problem, this is not a Middle Eastern problem. They have a desire to attack our homeland. They eventually will if they continue to have a safe haven to recruit foreign fighters. So it's in our interest to join the region and go get these guys."