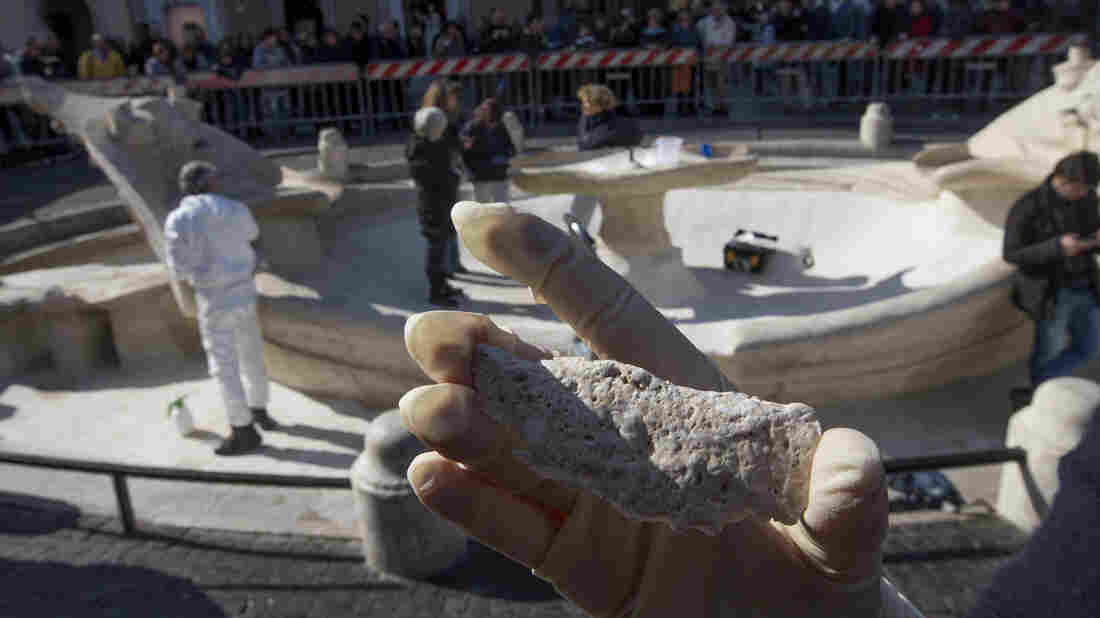 A worker shows a destroyed fragment of the fountain called "Barcaccia," at the foot of the Spanish Steps in Rome. The fountain was damaged in clashes as Dutch soccer fans rampaged through the city. Claudio Peri/AP hide caption 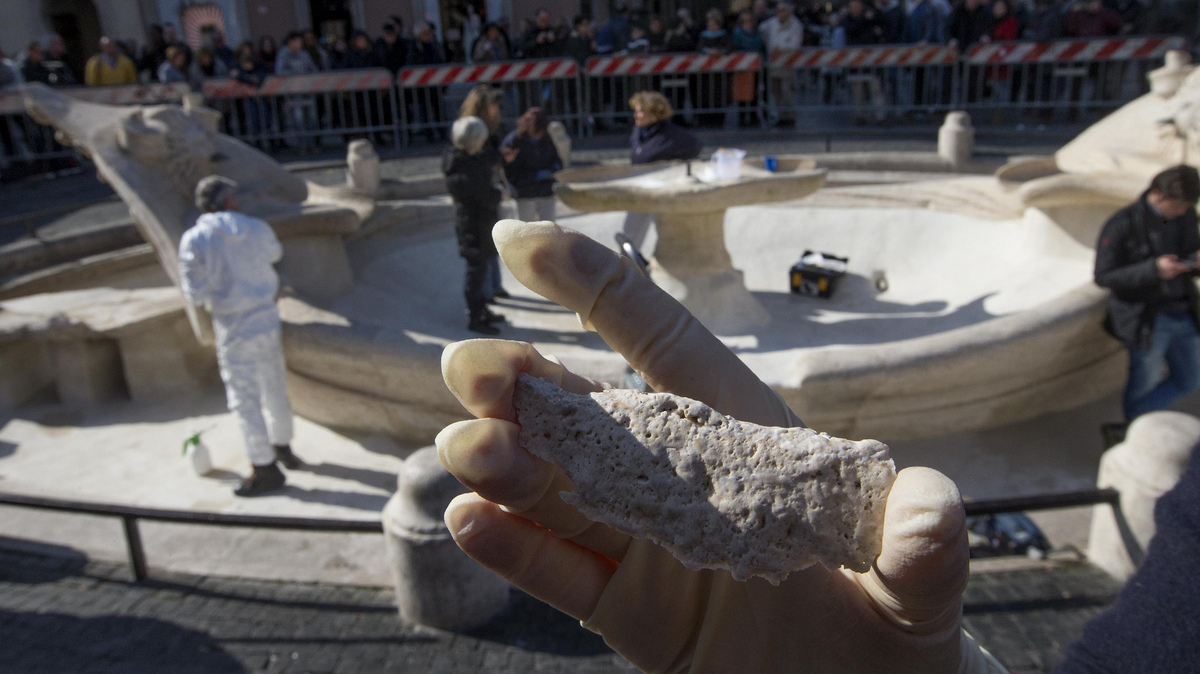 A worker shows a destroyed fragment of the fountain called "Barcaccia," at the foot of the Spanish Steps in Rome. The fountain was damaged in clashes as Dutch soccer fans rampaged through the city.

Some 7000 fans of the Rotterdam soccer team Feyenoord are believed to have traveled to Rome for yesterday's Europa League game against AS Roma.

The game ended in a draw, 1-1, a needed anticlimax after two days of street battles.

On Wednesday, tourists fled and shops hurriedly closed their shutters as Dutch soccer fans took over the central marketplace known as Campo de' Fiori — Field of Flowers — and left it a field of trash.

On Thursday the rampage moved to the Spanish Steps. TV footage showed hundreds of drunken men urinating in empty beer bottles and then hurling them at the baroque La Barcaccia fountain, designed by Gian Lorenzo Bernini in 1627.

Vandals left the fountain chipped and splintered. Shaped like a half-sunken ship with water overflowing its bow, the oval basin below was filled with broken glass and fragments of travertine marble.

Twenty-three Dutch nationals were arrested, and the first eight have already been sentenced to 6 months in jail, or a $50,000 fine.

A spokesperson for the Dutch embassy in Rome said, "Italian authorities can count on the complete collaboration and commitment of The Netherlands to see the culprits punished."

Today, Romans were demanding to know how this could have happened; why security wasn't tighter for a group of soccer fans known for their hooliganism; and who will pay for the damage.

This morning, Rome's public works department sent staff to empty and clean the fountain. Restorers from the city's arts and monuments department surveyed the damage. Interviewed by a TV reporter, art expert Anna Maria Cerioni could barely hold back tears as she described the state of the fountain, with broken marble fragments of up to 8 by 3.5 centimeters. "This is a desecration," she said, "an outrage and an insult in one of the most beautiful squares in the world."

She added, "The damage (to the fountain) is permanent."

Art historian Vittorio Sgarbi was even more scathing. "Those idiots," he said, "are incapable of understanding the beauty of art and of Rome, and they mistake this marvel by Bernini for a trash can."