In a new beta version of its operating system, Apple has introduced new, racially diverse emojis.

The website 9to5mac shared some screen shots with its readers. Here is one of them: 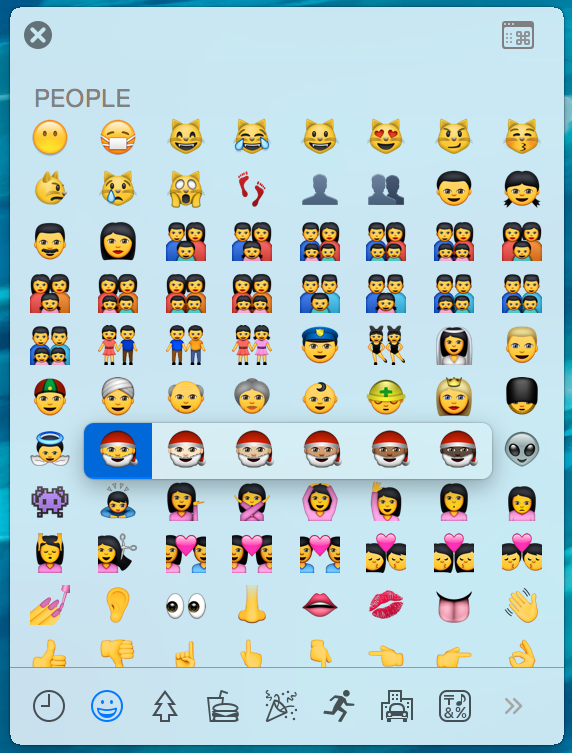 The new emojis on Apple's operating system are racially diverse and they also feature a diverse group of families. courtesy of 9to5mac hide caption

The site reports that, now, all the human-looking emojis come in many shades.

Of course, this all comes after the group that sets technical standards changed its mind about skin tones. As we reported, the Unicode Consortium announced back in November that it was going to allow more variety.

"People all over the world want to have emoji that reflect more human diversity, especially for skin tone. The Unicode emoji characters for people and body parts are meant to be generic, yet following the precedents set by the original Japanese carrier images, they are often shown with a light skin tone instead of a more generic (inhuman) appearance, such as a yellow/orange color or a silhouette.

"Unicode Version 8.0 is adding 5 symbol modifier characters that provide for a range of skin tones for human emoji. These characters are based on the six tones of the Fitzpatrick scale, a recognized standard for dermatology (there are many examples of this scale online, such as FitzpatrickSkinType.pdf). The exact shades may vary between implementations."

Of course, not everyone is happy with Apple's new emojis. Gizmodo asks if the yellow-toned emoji are racist or jaundiced.

But they eventually conclude:

"Obviously, there are more than six combinations of hair and skin color amongst the many billions of humans on Earth. But hey, these new emoji are certainly a step in the right direction."