Accessibility links
Netanyahu: U.S., Israel Agree On No Nukes For Iran, Split On How To Get There : The Two-Way But, the Israeli premier told AIPAC, reports of a decline in ties between the allies were "not only premature, they're just wrong." The remarks come amid tensions between the countries.

Netanyahu: U.S., Israel Agree On No Nukes For Iran, Split On How To Get There

Netanyahu: U.S., Israel Agree On No Nukes For Iran, Split On How To Get There 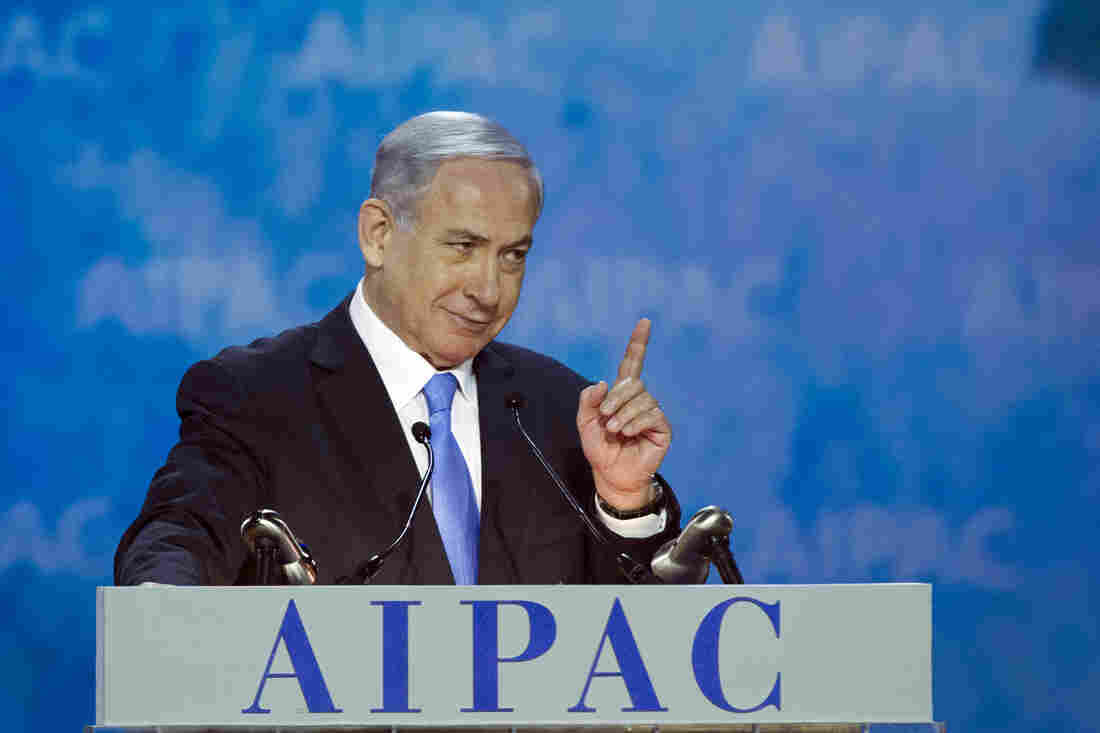 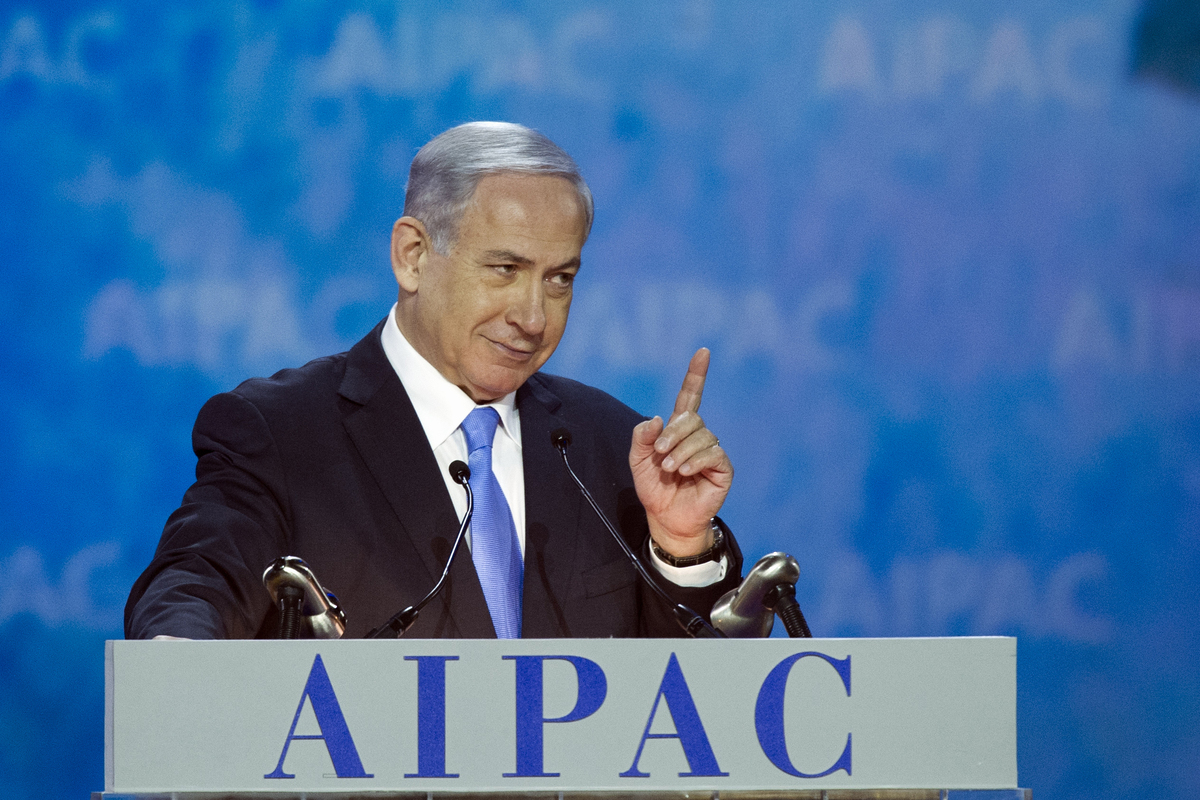 Israeli Prime Minister Benjamin Netanyahu says that while the U.S. and Israel agree that Iran should not get nuclear weapons, they disagree about how to stop the Islamic republic. But, he tells the 2015 American Israel Public Affairs Committee Policy Conference in Washington, reports of a decline in U.S.-Israeli relations are "not only premature, they're just wrong."

Netanyahu says his planned speech to Congress on Tuesday is not intended to be a slight to President Obama. "I have great respect for both" Obama and the office that he holds," he says.

"I deeply appreciate all that President Obama has done for Israel: security cooperation, intelligence sharing, support at the U.N., and much more; some things that I, as prime minister of Israel, cannot even divulge to you because it remains in the realm of the confidences that are kept between an American president and an Israeli prime minister," he tells the powerful pro-Israeli lobby.

As we have been reporting, Netanyahu's speech Tuesday to Congress has been controversial from almost the moment it was announced by House Speaker John Boehner. Netanyahu says he wants to highlight the dangers posed by Iran. He is opposed to the talks involving the U.S. and its allies and Iran over the Islamic republic's nuclear program.

The Obama administration has called the invitation to the Israeli leader, made without consulting the White House or the State Department, a departure from protocol. Obama, citing the proximity of the March 17 Israeli elections, has said he won't meet Netanyahu during his visit to Washington; neither will Vice President Joe Biden or Secretary of State John Kerry, who will both be traveling at that time.

Kerry last week said Netanyahu's judgment of talks with Iran "may not be correct." And Susan Rice, Obama's national security adviser who will address the AIPAC conference later today, said Boehner's invitation to Israel's prime minister — and Netanyahu's acceptance of it — have "injected a degree of partisanship" that is "destructive to the fabric of the relationship" between Israel and the U.S.

Samantha Power, the U.S. ambassador to the U.N., alluded to the recent tensions and told the AIPAC audience: "The U.S.-Israel partnership transcends politics and it always will."

And, she says: "The United States of America will not allow Iran to obtain a nuclear weapon. Period."

Obama's National Security Adviser Susan Rice told AIPAC this evening that the "type of comprehensive deal we seek" with Iran is the best way to keep the country from developing a nuclear weapon in the long run.

Rice said that Congress has played a central role in building the sanctions regime that the U.S. and its allies have imposed on Iran.

Rice tried to comfort the members of AIPAC by saying that the U.S. goes into this talk by distrusting and verifying.

And, she added to applause, "We have Israel's back come hell or high water."

Netanyahu says the U.S. and Israel "are family."

Netanyahu cites past disagreements between the two allies, dating all the way back to 1948 until today.

"Despite occasional disagreements, the friendship between America and Israel grew strong and stronger, decade after decade," he says.

He says that as "prime minister of the one and only Jewish state, I plan to use that voice" on Tuesday to tell Congress about the dangers posed by Iran.

Iran, he adds, is "threatening to destroy Israel, devouring country after country in the Middle East, exporting terrorism and developing capacity to make nuclear weapons, lots of them."

He says that Israel and the U.S. "agree" that Iran should not have nuclear weapons, but "disagree on the best way to prevent them from developing nuclear weapons."

Netanyahu says he has a "moral obligation" to raise the dangers posed by Iran.

Netanyahu reiterates that Israel has bipartisan support in Congress.

"You might have heard," he says. "I'm also speaking at Congress tomorrow."

And he jokes: "Never has so much been written about a speech that hasn't been given."

He says his speech isn't intended to offend President Obama.

"I have great respect for both" Obama and the office that he holds," the prime minister says.

Netanyahu gives a shout-out to his ambassador to Washington, Ron Dermer, calling him "an ambassador who knows how to take the heat."

Dermer has been criticized in Washington for organizing Netanyahu's address to Congress without first notifying the Obama administration.

Samantha Power, the U.S. ambassador to the U.N., has told an audience at the American Israel Public Affairs Committee that the U.S. relationship with Israel would transcend any differences.

"We believe firmly that Israel's security and the U.S.-Israel partnership transcends politics and it always will," she says.

Power reminds the audience of a speech made by Sen. John F. Kennedy in 1960. Kennedy said:

It is worth remembering, too, that Israel is a cause that stands beyond the ordinary changes and chances of American public life. In our pluralistic society, it has not been a Jewish cause — any more than Irish independence was solely the concern of Americans of Irish descent. The ideals of Zionism have, in the last half century, been repeatedly endorsed by Presidents and Members of Congress from both parties. Friendship for Israel is not a partisan matter. It is a national commitment.

Power adds: "The bond between Israel and the U.S. is still a national commitment. It should never be partisan matter. ... Now, as then, we cannot — and we will not — lose sight of that."

Power says combating "anti-Israel bias" at the U.N. is a bipartisan issue and can be traced back to the founding of the Jewish state in 1948. She says that when the Soviet premier asked President Johnson after the 1967 Six-Day War why the U.S. supported Israel, "a nation so vastly outnumbered by neighboring countries," he replied: "Numbers do not determine what is right."

Power is highlighting U.S. efforts to support Israel at the U.N. She says it's a false choice to ask Israel to choose between peace and security, saying no other country would be asked to make such a choice. But she also says: "Israeli settlement activity damages the prospect for peace. Nor will one-sided actions in international bodies or accession to international treaties, such as actions against Israel at the International Criminal Court, help us get to a negotiated solution"

Updated at 9:44 a.m. ET: Anti-Semitism A Threat To Europe

Power cites incidents of anti-Semitism across the world.

"Anti-Semitic attacks are not only a threat to the Jewish community, they are also a threat to European liberalism and pluralism," she says.

"We know the stakes of a nuclear-armed Iran as well as everyone here," Power says. "We will not let it happen."

She adds: "There will never be a sunset on America's commitment to Israel's security. Never."

"The United States of America will not allow Iran to obtain nuclear weapons. Period," Power says.