Accessibility links
In Speech To Congress, Netanyahu Blasts 'A Very Bad Deal' With Iran : The Two-Way The Israeli premier's remarks are the culmination of a controversy that began in January when he was invited — without input from the White House — to make the speech.

In Speech To Congress, Netanyahu Blasts 'A Very Bad Deal' With Iran

In Speech To Congress, Netanyahu Blasts 'A Very Bad Deal' With Iran 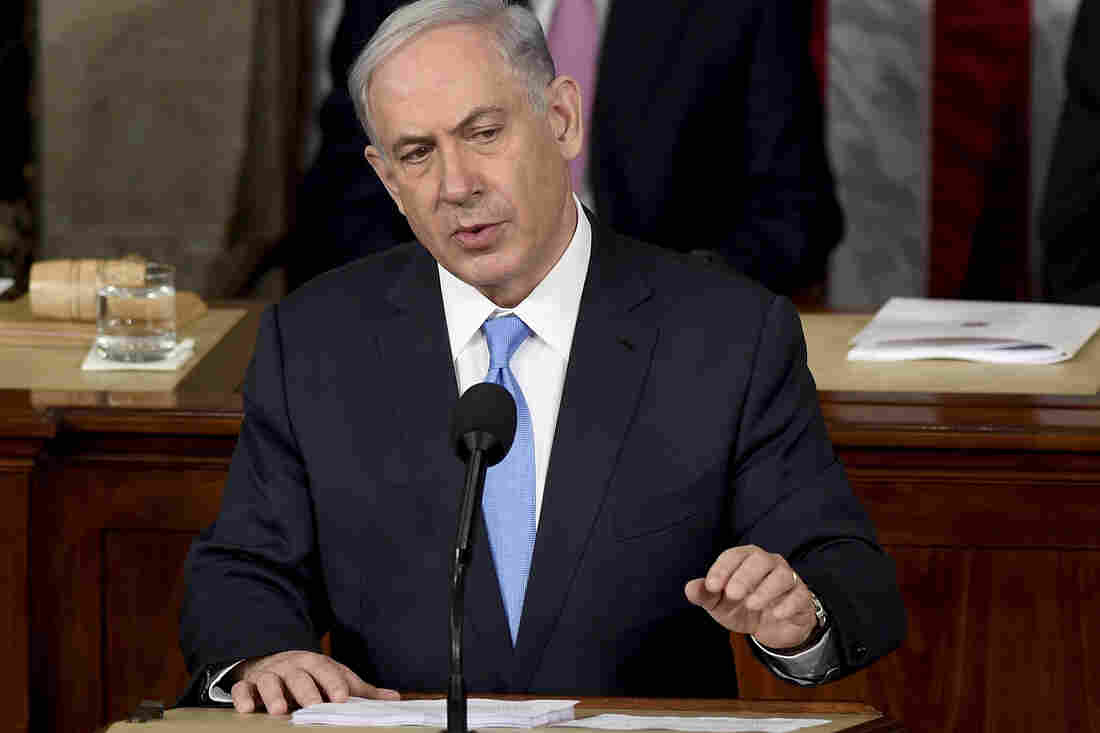 Israeli Prime Minister Benjamin Netanyahu speaks before a joint meeting of Congress on Capitol Hill in Washington on Tuesday. He called the deal the U.S. and its allies are negotiating with Iran "very bad." Susan Walsh/AP hide caption 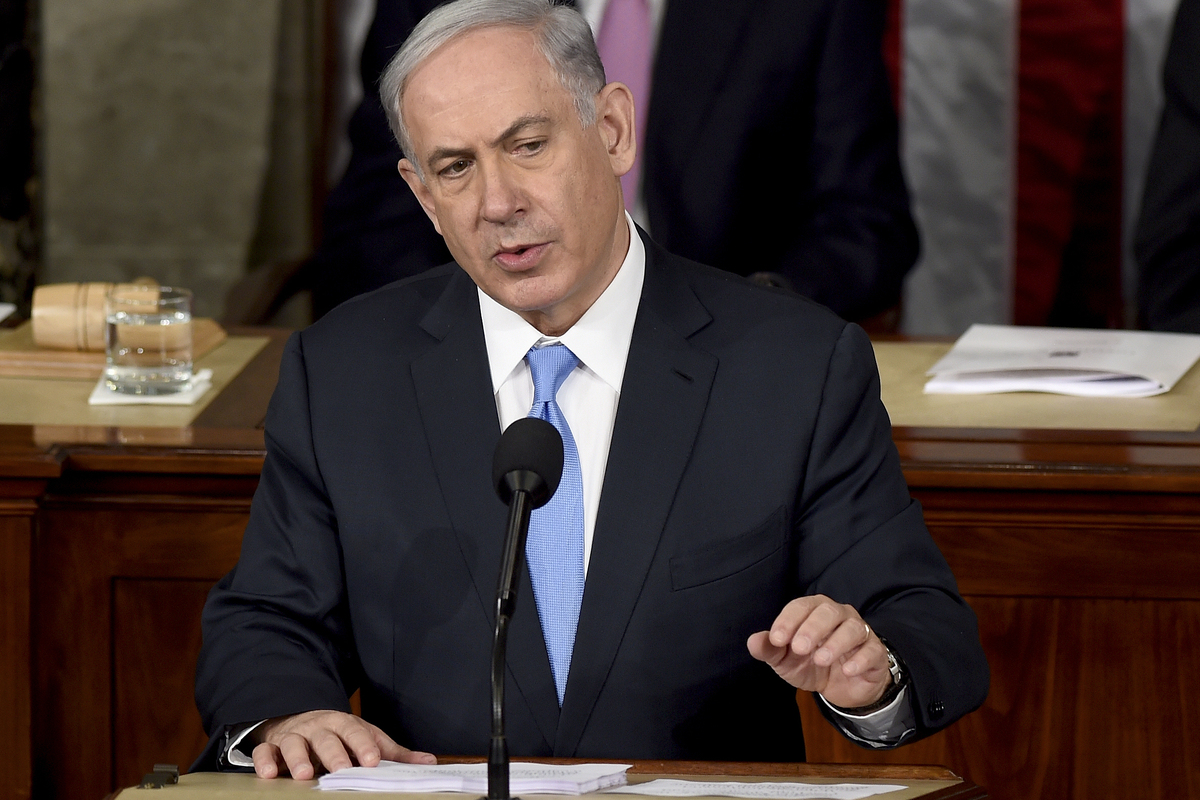 Israeli Prime Minister Benjamin Netanyahu speaks before a joint meeting of Congress on Capitol Hill in Washington on Tuesday. He called the deal the U.S. and its allies are negotiating with Iran "very bad."

Israeli Prime Minister Benjamin Netanyahu said a deal the U.S. and its allies are pursuing with Iran over its nuclear program is "very bad" because, according to him, it doesn't take away the Islamic republic's ability to ultimately obtain nuclear weapons.

"This is a bad deal — a very bad deal," Netanyahu told a joint meeting of Congress today. "We're better off without it."

He said such a deal will "guarantee" that Iran gets nuclear weapons because it allows the Islamic republic to keep much of its nuclear infrastructure in place. And, he added, the alternative to a bad deal is not war, as some supporters of the deal with Iran have said, but "the alternative to this bad deal is a much better deal."

Noting that he has a "profound obligation" to speak about the dangers posed by Iran, the Israeli leader outlined the threats made by the Islamic republic and its proxies against Israel.

"Iran's supreme leader ... spews the oldest hatred of anti-Semitism with the newest technology," Netanyahu said. "He tweets that Israel must be ... destroyed."

The prime minister spent the early part of his speech outlining the strength of the U.S.-Israeli relationship, saying it must "always remain above politics," and he thanked President Obama for his support of Israel.

Obama, speaking at the White House, said, "as far as I can tell, there was nothing new" in Netanyahu's speech, adding, "the prime minister didn't offer any viable alternatives." He said he didn't watch the speech because it coincided with a video conference with European leaders.

As we have reported, the speech — along with its topic: Iran — was controversial from the moment it was announced last month by House Speaker John Boehner.

The White House wasn't consulted about the invitation, and called it a departure from protocol. Obama, citing the proximity of Israel's March 17 election, said he won't meet the Israeli prime minister; neither will Vice President Joe Biden or Secretary of State John Kerry, both of whom are traveling. Several Democrats skipped the Israeli leader's talk today.

Kerry has questioned Netanyahu's judgment regarding talks about Iran's nuclear program; Susan Rice, Obama's national security adviser, said recently that the prime minister's speech had "injected a degree of partisanship" that is "destructive to the fabric of the relationship."

Obama, in an interview with Reuters on Monday, said a long-term deal with Iran is the best way to ensure the Islamic republic doesn't obtain a nuclear weapon. He said Netanyahu's speech to Congress "isn't permanently destructive" to the U.S-Israeli relationship.

But, Obama added, when the U.S. and its allies signed an interim deal with Iran that would freeze its nuclear program, "Prime Minister Netanyahu made all sorts of claims: This is going to be a terrible deal. This was going to result in Iran getting $50 billion worth of relief. Iran would not abide by the agreement. None of that has come true." (You can see the president's complete remarks here.)

Netanyahu, Rice and Samantha Power, who is the U.S. envoy to the U.N., all addressed the 2015 American Israel Public Affairs Committee Policy Conference in Washington on Monday, and they each emphasized the strength of the U.S.-Israeli alliance.

Here is our live blog of Netanyahu's remarks to Congress today:

"This is a bad deal — a very bad deal. We're better off without it," Netanyahu says.

And there you have it — the money quote. The prime minister's comment refers to a deal the U.S. and its allies are trying to negotiate with Iran over its nuclear program.

The Israeli leader says, "The alternative to this bad deal is a much better deal" not war.

Netanyahu gives a shout-out to Elie Wiesel, the Holocaust survivor and Nobel laureate, who is in the audience.

"I wish I could promise you, Elie, that the lessons of history have been learned," he says.

The Israeli prime minister ends his speech to sustained applause and a standing ovation with a quote from Moses: "Be strong and resolute."

Prime Minister Benjamin Netanyahu says the current deal that the U.S. and its allies are discussing with Iran will "guarantee" that the Islamic republic gets nuclear weapons.

He says the deal will allow Iran to keep its major infrastructure — with a short breakout time for a bomb. Not a single facility will be demolished, he says, and thousands of centrifuges will be allowed to continue to spin.

"Iran has proven once and again that it cannot be trusted," the prime minister says.

He says a second major concession under the deal would allow Iran to get to the bomb after 10 years.

Netanyahu says the deal "won't change Iran for the better, it will change the Middle East for the worse," saying Iran's neighbors, presumably Saudi Arabia and others, will pursue their own nuclear programs.

"We can insist that restriction on Iran's nuclear program not be lifted as long as Iran continues its aggression in the region and the world," he says.

He says Iran must do three things: Stop aggression against its neighbors; stop supporting terrorism around the world; stop threatening "to annihilate my country — Israel, the one and only Jewish state."

He says that if Iran changes its behavior, the restrictions will be lifted.

Netanyahu says he has a "profound obligation" to speak about the threat posed by Iran's nuclear program. It's worth noting here that Iran denies that it is pursuing nuclear weapons — though Israel and the West believe that the Islamic republic is indeed pursuing such weapons.

"Iran's supreme leader ... spews the oldest hatred of anti-Semitism with the newest technology," Netanyahu says. "He tweets that Israel must be ... destroyed."

The Israeli leader says the people of Iran are "very talented people" who were "hijacked by religious zealots" in 1979, the year of the Islamic revolution.

He says Iran's mission is "death, tyranny and the pursuit of jihad," and cites the instability across the region, including in Syria, Gaza and Yemen.

"The time when many hoped that Iran will join the community of nations — Iran is busy gobbling up nations," he says.

He says Iranian President Hassan Rouhani and his foreign minister, Mohammed Javad Zarif, came to power promising "change and moderation," but that Iran still "hangs gays, persecutes Christians" and journalists. He goes on to compare Iran and the self-described Islamic State, or ISIS, saying they might be fighting each other, but "Iran and ISIS are competing for the crown of militant Islam."

If Iran threatens to walk away from a nuclear deal, Netanyahu says, call their bluff.

"They need the deal a lot more than you do," he says.

Netanyahu says he is "deeply humbled" to talk for a third time before the "most important legislative body in the world — the U.S. Congress."

He refers to the controversy surrounding the speech, saying that was never his intention. He thanks lawmakers from both parties for their bipartisan support of Israel. At this, there's more applause.

He says U.S.-Israeli relations "must always remain above politics."

He says Israel appreciates what presidents from Truman to Obama have done for Israel. And he's listing all the things Obama has done, some of which, he says, are less well known — such as supplying Interceptor missiles during Israel's war last year with Hamas in Gaza. And, he says, some of the help can never be revealed — given its confidential nature.

"I will always be grateful to President Obama for that support," Netanyahu says.

He also thanks Congress for its support, including for the Iron Dome missile defense system.

Netanyahu enters the House to a standing ovation. He is making his way through the chamber, shaking the hands of lawmakers, and is stopping to talk to some of them.

There's a sustained standing ovation as he waves to the crowd.

He makes his way to the top, and shakes hands and exchanges words with House Speaker John Boehner, the man who invited him here, and Sen. Orrin Hatch, R-Utah.

Boehner is announcing the Israeli leader — who gets another sustained round of applause and standing ovation.

Israeli Prime Minister Benjamin Netanyahu is to address Congress shortly. The lawmakers are assembled, though about 50 of them are skipping the talk. Here's a list.