Accessibility links
Alabama Supreme Court Again Halts Gay Marriage : The Two-Way In a 134-page opinion, the court issued an order that goes against what higher courts has decided. The decision once again will pit the state against the federal judiciary. 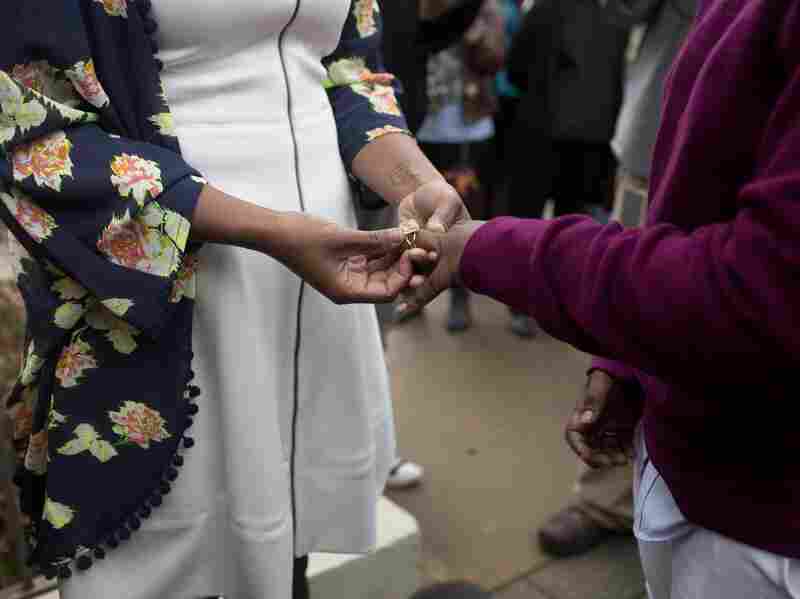 Tori Sisson, left, and Shante Wolfe, right, exchange wedding rings during their ceremony, Feb. 9, 2015, in Montgomery, Ala. They were the first couple to file their marriage license in Montgomery County. Such marriage licenses appear to be on hold again following a state Supreme Court ruling on Tuesday. Brynn Anderson/AP hide caption 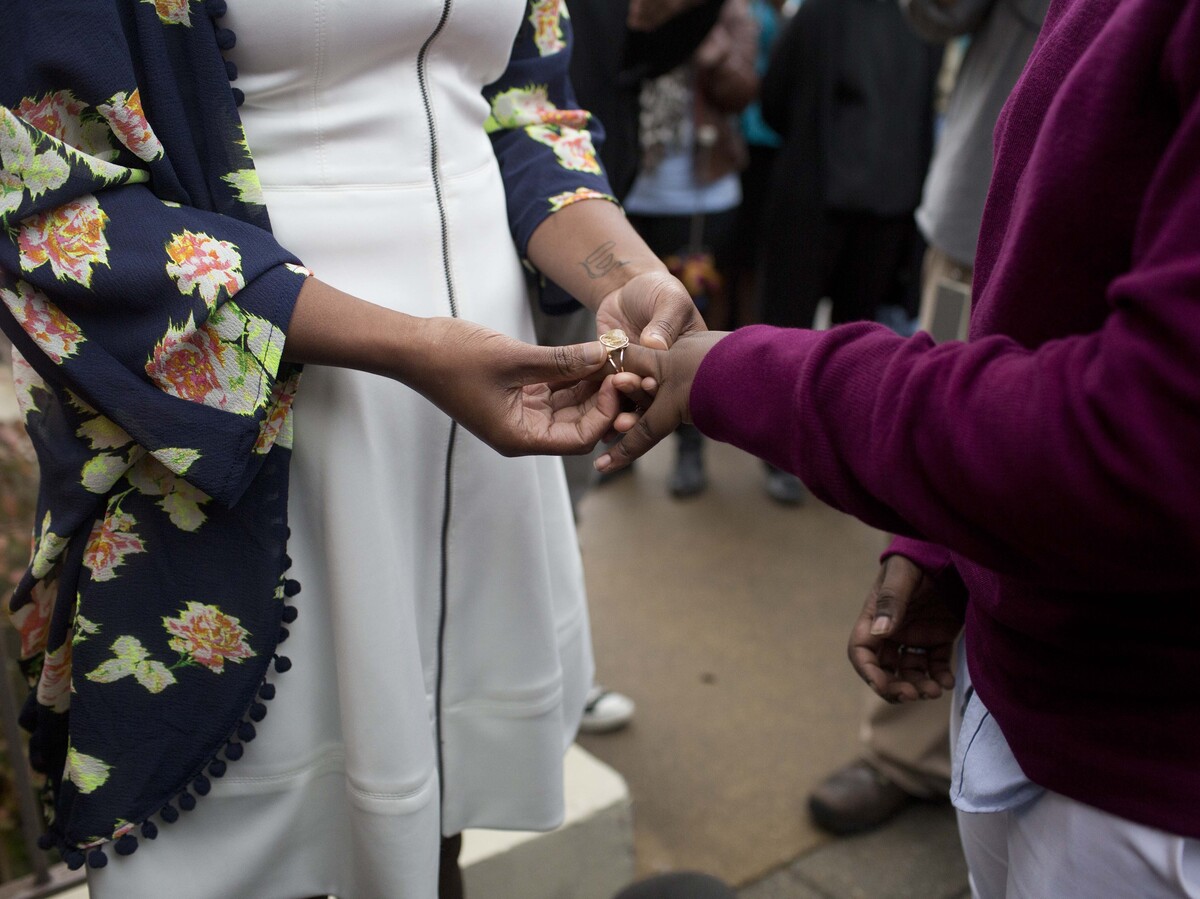 Tori Sisson, left, and Shante Wolfe, right, exchange wedding rings during their ceremony, Feb. 9, 2015, in Montgomery, Ala. They were the first couple to file their marriage license in Montgomery County. Such marriage licenses appear to be on hold again following a state Supreme Court ruling on Tuesday.

The Alabama Supreme Court once again has instructed probate judges not to issue marriage licenses.

In a 134-page opinion, seven of the nine justices said the U.S. Constitution "does not require one definition of marriage."

"As it has done for approximately two centuries, Alabama law allows for 'marriage' between only one man and one woman," the court wrote. "Alabama probate judges have a ministerial duty not to issue any marriage license contrary to this law. Nothing in the United States Constitution alters or overrides this duty."

Of course the big conflict here is that a U.S. District Court judge struck down Alabama's ban on gay marriage. That was appealed, but the Supreme Court refused to put a hold on that ruling while it decides on the issue of same-sex marriage itself.

Supreme Court Will Rule On Gay Marriage Later This Year

Supreme Court Will Rule On Gay Marriage Later This Year

This means that that today's ruling from the Alabama Supreme Court throws the state into conflict with the federal judiciary. Remember, it was Alabama Chief Justice Roy Moore who issued a similar order in February.

U.S. District Court Judge Callie Granade, who struck down gay marriage in the state, said that probate judges should should follow her order, not that of the chief justice.

Moore recused himself from Tuesday's ruling.

"David Kennedy, one of the lawyers who represented the Mobile couple who successfully challenged Alabama's same-sex marriage ban, said he does not think the ruling would survive a challenge in federal court.

" 'I don't really think that they can do that. I'm not surprised, but I'm somewhat appalled,' he said. 'The Supreme Court of the United States ruled that the stay (on the order striking down the gay marriage ban) would expire on Feb. 9. On Feb. 9, same-sex marriage effectively became legal in Alabama.' ...

"Kennedy said he believes that probate judges act 'at their own peril' if they choose to obey state courts instead of federal court. He said any couple denied a marriage license could sue in the federal district where they live. He said the outcome should be clear.

Justice Greg Shaw was the lone dissenter in this case. He said that the Supreme Court should have put Granade's ruling on hold, but that it is clear that this court has no jurisdiction to take this case and that the public interest groups suing on behalf of the state have no standing.

"By overlooking this Court's normal procedures; by stretching our law and creating exceptions to it; by assuming original jurisdiction, proceeding as a trial court, and reaching out to speak on an issue that this Court cannot meaningfully impact because the Supreme Court of the United States will soon rule on it; and by taking action that will result in additional confusion and more costly federal litigation involving this State's probate judges, this Court, in my view, is venturing into unchartered waters and potentially unsettling established principles of law. Therefore, I must respectfully dissent."