Accessibility links
MH370 Had Expired Battery On Black Box 'Pinger,' Report Says : The Two-Way It said the battery had expired 15 months prior to the Malaysia airliner's disappearance. The report also said there was no evidence the plane's crew acted abnormally ahead of the flight. 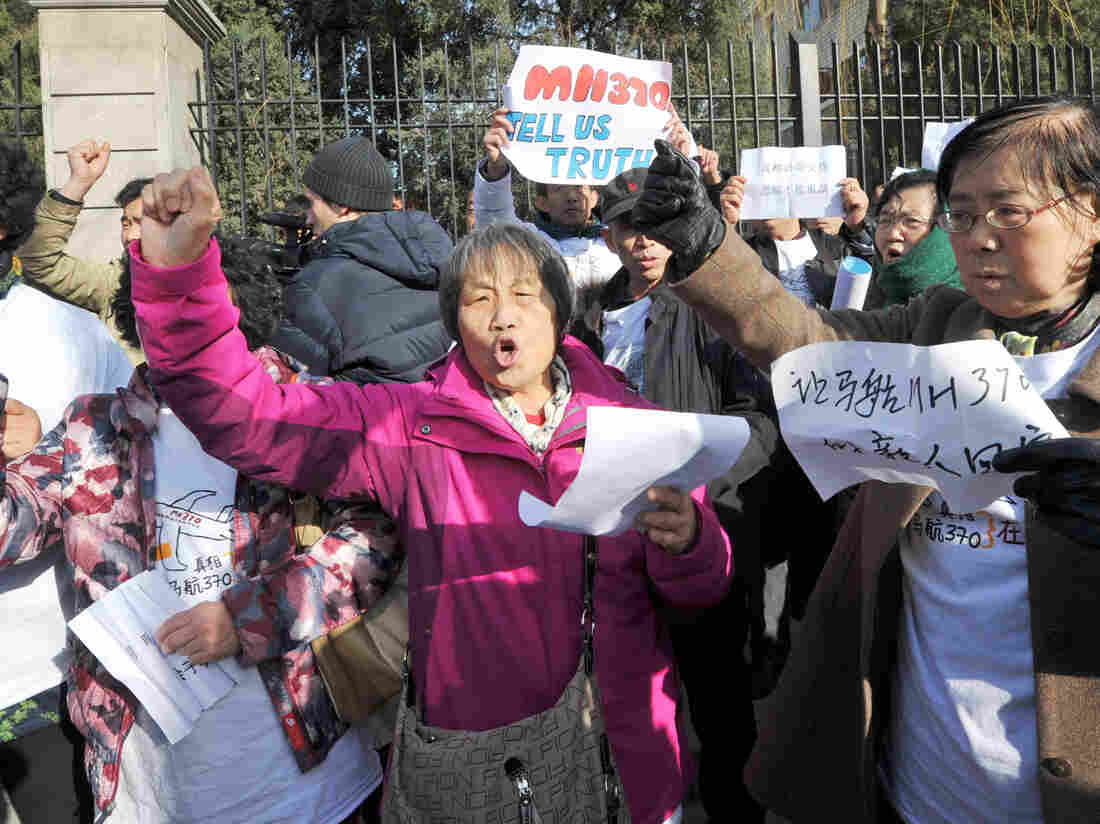 About 30 people believed to be relatives of Chinese passengers of Malaysia Airlines Flight MH370 that went missing a year ago, protest near the Malaysian Embassy in Beijing on Sunday. Kyodo/Landov hide caption 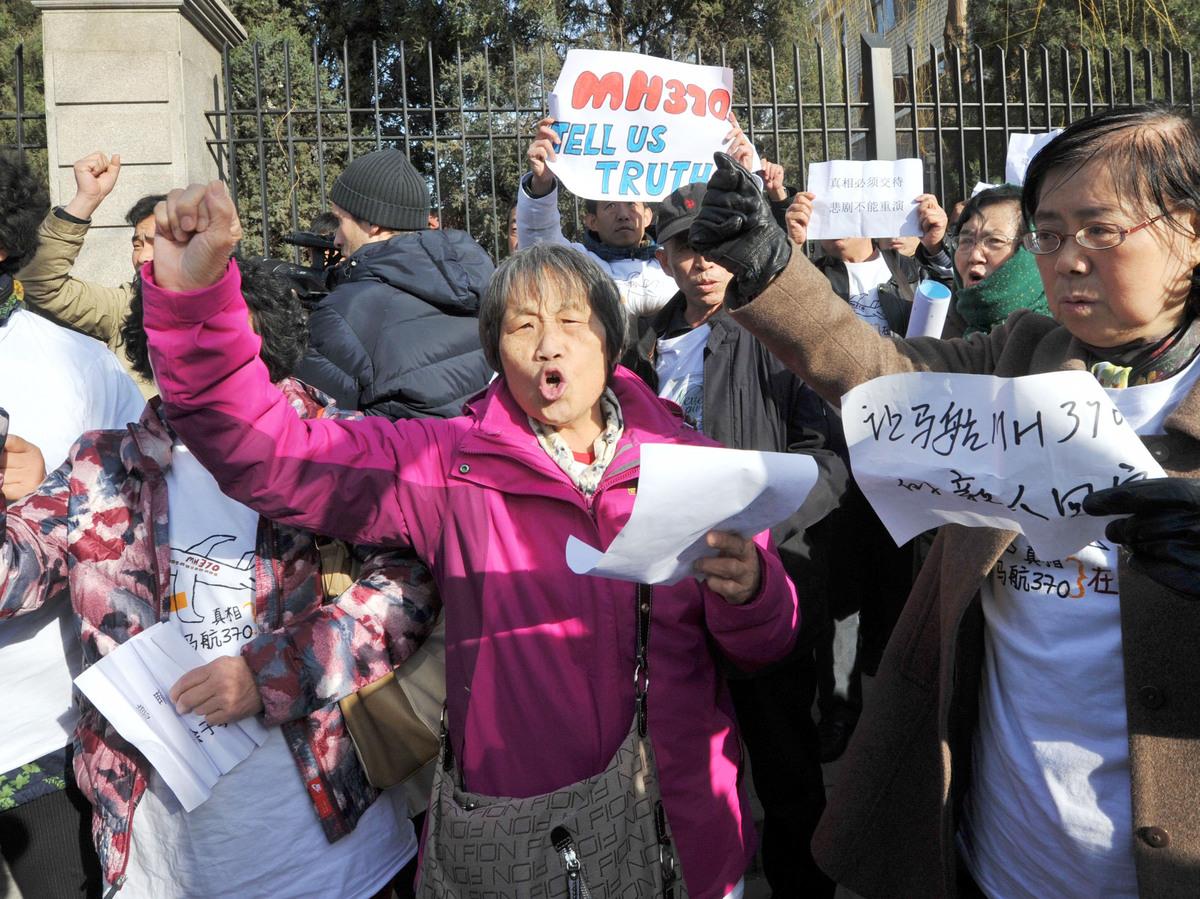 About 30 people believed to be relatives of Chinese passengers of Malaysia Airlines Flight MH370 that went missing a year ago, protest near the Malaysian Embassy in Beijing on Sunday.

An interim report released on the one-year anniversary of the disappearance of Malaysia Airlines Flight MH 370 shows that the battery for the locator beacon on the Boeing 777's so-called black box was more than a year out of date at the time the plane lost contact with ground controllers over the Gulf of Thailand. 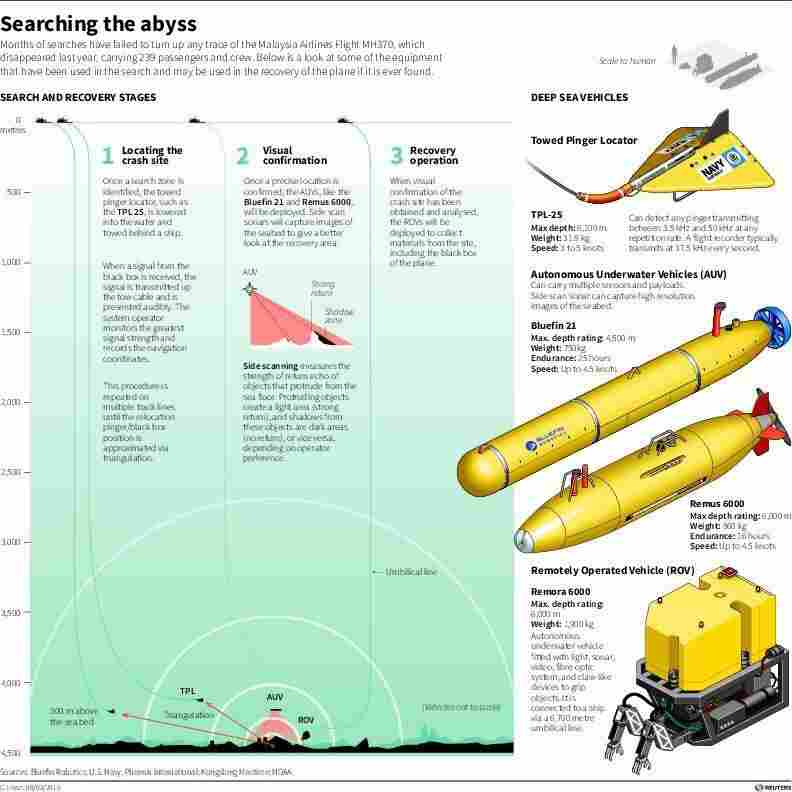 Reuters graphic showing the equipment that have been used in the search and may be used in the recovery of the Malaysia Airlines Flight MH370 if it is ever found. RNGS/Reuters/Landov hide caption 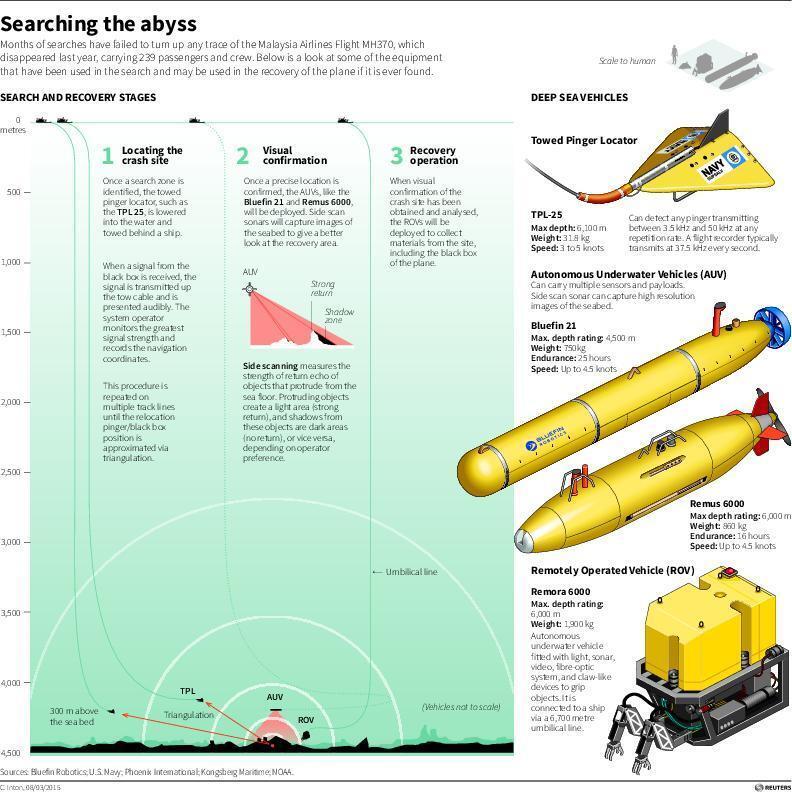 Reuters graphic showing the equipment that have been used in the search and may be used in the recovery of the Malaysia Airlines Flight MH370 if it is ever found.

If the battery was weaker than it should have been, it could have affected how long the "pinger" kept working and theoretically could have complicated the search.

The report, however, presented no evidence to advance theories that the pilot, co-pilot or crew may have intentionally hijacked the flight, which had taken off from Kuala Lumpur bound for Beijing with 239 passengers and crew when it disappeared.

"There were no behavioural signs of social isolation, change in habits or interest, self-neglect, drug or alcohol abuse of the Captain, First Officer and the Cabin Crew," the investigative report said.

"On studying the Captain's behavioural pattern on CCTV recordings on the day of the flight and prior 3 flights there was no significant behavioural changes observed. On all the CCTV recordings the appearance was similar, i.e. well groomed and attired. The gait, posture, facial expressions and mannerism were his normal characteristics."

As The Sydney Morning Herald notes:

"Fingers have been pointed at Captain Zaharie Ahmad Shah who according to some reports had problems with his marriage and was upset with Malaysia's government over its jailing of opposition leader Anwar Ibrahim.

"But the report provides no evidence to support a so-called 'rogue pilot' theory, saying Captain Zaharie held bank accounts with his wife, owned two houses and had not taken out an insurance policy."

Family members of those aboard MH370 held gatherings in Kuala Lumpur to protest the lack of answers.

"My daughter asks me every day, 'Where is Daddy? Why isn't he answering his phone?" Kelly Wen from China, whose husband was on the plane, was quoted by The Associated Press as saying.

Australia has taken a leading role in the search for the missing plane, which is believed to have diverted from its original course and flown as far as the southern Indian Ocean before running out of fuel and crashing into the water.

Australian Prime Minister Tony Abbott said in recent days that the search for MH370 could not go on "at this intensity forever," but on Sunday he said he was "reasonably optimistic of success.

"[But] if we don't succeed in this search there is another search that we intend to make because we owe it to the families of the dead, we owe it to the traveling public, to do whatever we reasonably can to the resolve of this mystery," he said, according to the Herald.

Abbott's latest remarks come after Malaysia's transport minister said that if the search did not yield anything by the end of May, it would be "back to the drawing board."

The search, with a price tag of $120 million so far, is already the costliest in aviation history.