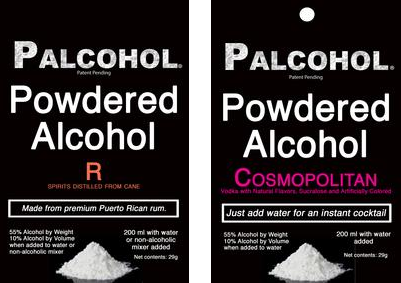 Two days after a federal regulator approved powdered alcohol, there's already an attempt to ban it.

Sen. Charles Schumer, D-N.Y., said today he is introducing legislation in the Senate to make the production, sale and possession of Palcohol illegal.

"I am in total disbelief that our federal government has approved such an obviously dangerous product, and so, Congress must take matters into its own hands and make powdered alcohol illegal," he said. Underage alcohol abuse is a growing epidemic with tragic consequences and powdered alcohol could exacerbate this."

Palcohol got the green light this week from the Alcohol and Tobacco Tax and Trade Bureau for its powdered versions of a cosmopolitan, a margarita, rum and vodka. Another product, Lemon Drop, is expected to be approved soon, The Associated Press reported.

The Alcohol and Tobacco Tax and Trade Bureau had approved the product last year – before quickly reversing that decision.

As NPR's Michaeleen Doucleff reported at the time:

"The idea behind Palcohol is simple: dehydrated vodka or rum inside a little air-tight package.

"In other words, it's like an adult version of Kool Aid or Country Time Lemonade."

Palcohol says on its website that it hopes to be on shelves by this summer.

Schumer's proposed legislation is not the only roadblock the product faces. Several states have already banned powdered alcohol, and other states are considering bans amid fears that minors and others will abuse the product. But Palcohol says the reason for the bans is the liquor industry's desire to "squash competition and protect their market share." And, it says, it will be sold where regular alcohol is sold and with the same rule: You can't legally buy it if you're under 21.

And if you're wondering whether you can snort the powder, Palcohol says:

"Listen, people can snort black pepper....so do we ban it? No, just because a few goofballs use a product irresponsibly doesn't mean you ban it. But even the goofballs won't snort Palcohol due to the pain the alcohol would cause. It really burns. Imagine sniffing liquid vodka. Second, it's impractical. It takes approximately 60 minutes to snort the equivalent of one shot of vodka. Why would anyone do that when they can do a shot of liquid vodka in two seconds?"