Accessibility links
Ikea To 32,000 People: No Hide-And-Seek At Our Stores : The Two-Way The company brought the hammer down at its locations in the Netherlands, after more than 32,000 people signed up via Facebook to play at a store in Eindhoven. 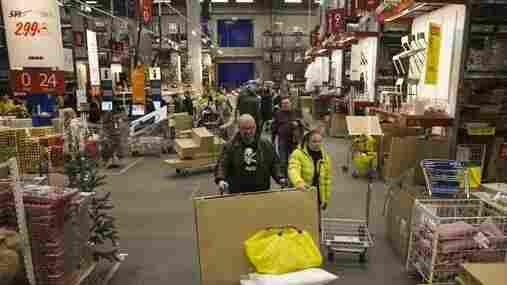 It's not hard to find nooks and crevices to cram one's self into at Ikea. Pavel Golovkin/AP hide caption

Anyone who has meandered through an Ikea store can see the potential for hide-and-seek: the gargantuan hollow tubs, the high-hung rugs concealing whole walls, ottomans.

Well, don't get any big ideas.

Ikea announced Monday that it will no longer allow games of hide-and-seek at its stores in the Netherlands, after more than 32,000 people signed up via Facebook to play at a store in Eindhoven, Bloomberg reports.

"It's hard to control," Ikea Group spokeswoman Martina Smedberg told Bloomberg. "We need to make sure people are safe in our stores, and that's hard to do if we don't even know where they are."

Had the May 16 game gone forward with even a fraction of those who had signed up to participate, it would have broken the Guinness World Record for largest hide-and-seek game ever. The current record involved just 1,437 people in China.

"Ikea let a game happen last July in one of its Belgium stores, after Elise De Rijck, 29, put it on a list of 30 things she wanted to do before she turned 30.

" 'Ikea is like an extremely large living room,' she said."

About 500 people joined that game (photos are here), but an Ikea spokesperson told ABC News that it was a "one-off thing."

The 32,000 in Eindhoven was the biggest group assembled online, but not the only one — and not even the only one in the Netherlands. According to Time, 19,000 signed up for a game in Amsterdam, and 12,000 wanted to play in Utrecht.

And this isn't the first time the company has had to deal with guerilla stunts at its stores.

Not surprisingly, prior to the company's announcement, people on Twitter seemed pretty thrilled about the possibility of hiding in furniture:

Uhhh hide and seek in IKEA? Can I get a hell yes!?