Accessibility links
As Night Falls, Officials Call Off Search Operation For German Plane : The Two-Way The 150 people on board Germanwings Flight 4U 9525 are feared dead. The plane left Barcelona, Spain, this morning en route to Duesseldorf, Germany, and crashed in the French Alps. 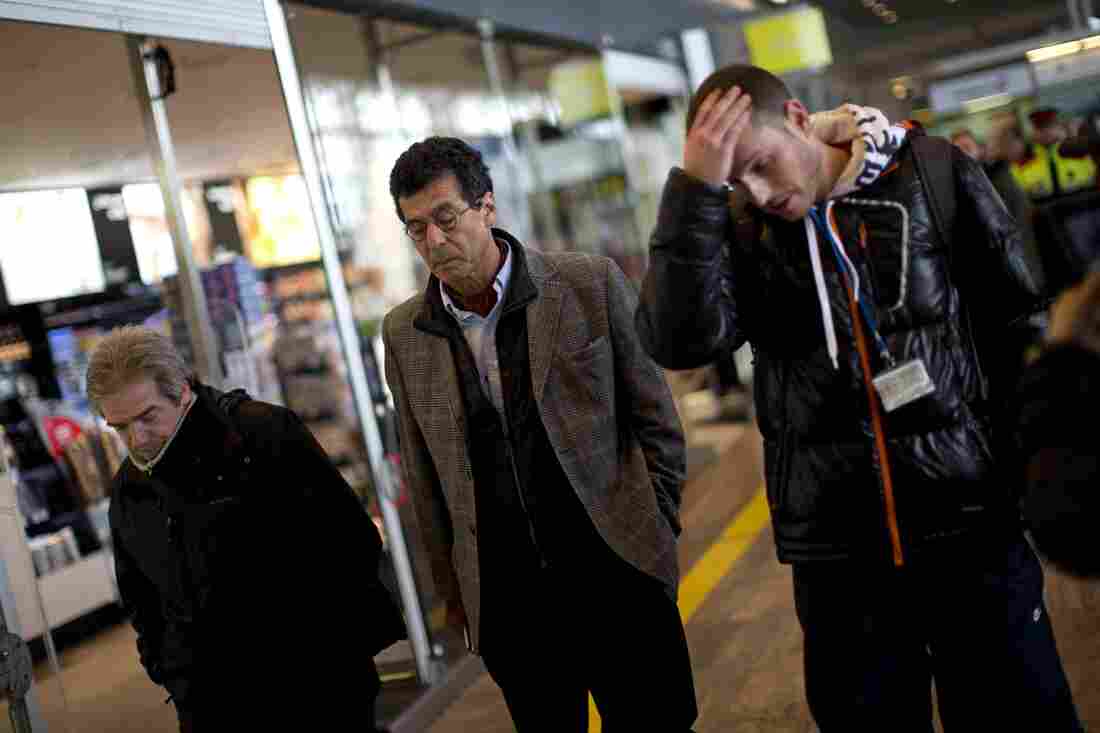 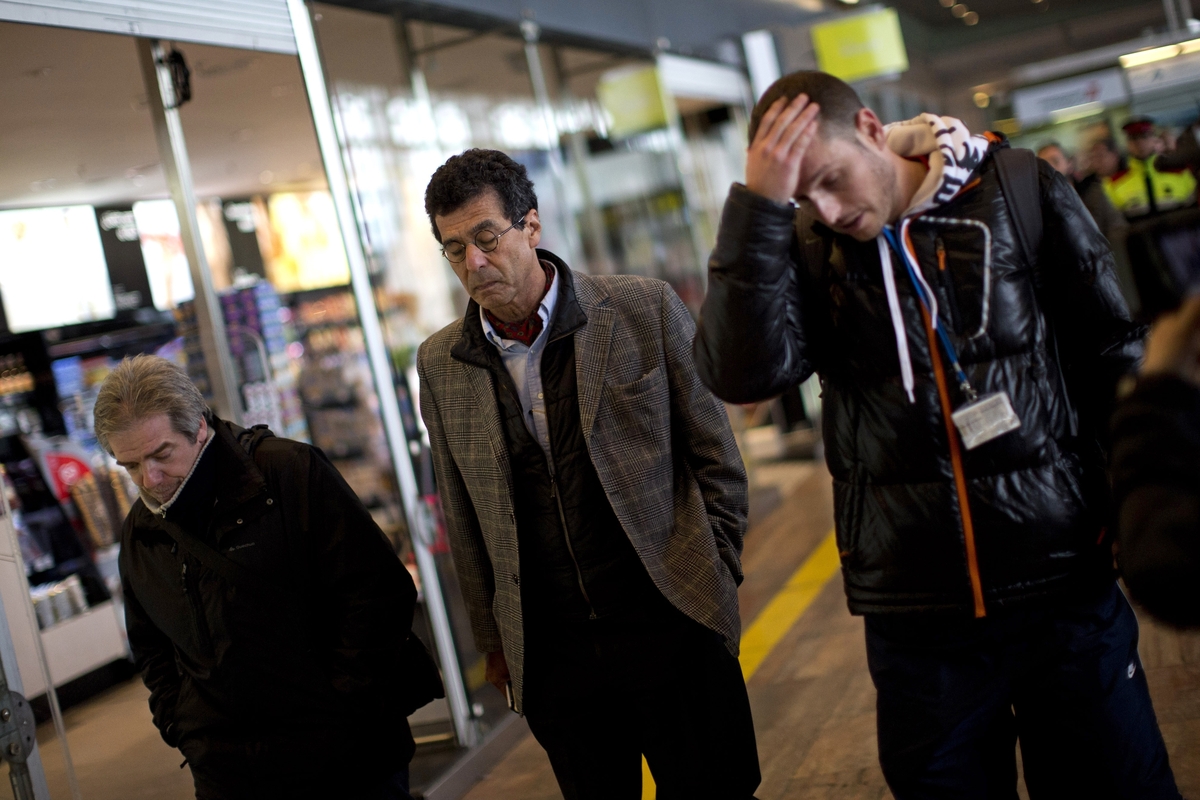 Family of passengers on the Germanwings plane that crashed Tuesday arrive at Barcelona airport.

An Airbus A320 aircraft operated by Germanwings, Lufthansa's low-cost subsidiary, crashed in the French Alps today, likely killing all 150 people on board, French officials said. Germanwings said Flight 4U 9525 was traveling from Barcelona, Spain, to Duesseldorf, Germany.

As night fell on the area, French authorities called off the search operations.

At a news conference, Germanwings CEO Thomas Winkelmann said the plane began descending after reaching its regular height, and then dropped for eight minutes. FlightAware.com says the plane's cruising altitude is 38,000 feet.

Winkelmann said the plane lost contact with French radar and French air traffic control at 10:55 a.m. local time when it was at a height of about 6,000 feet.

"The plane then crashed," he said.

His comments in German were translated by France 24.

"We cannot say at this point in time why our colleague decided to lower the plane as swiftly as he did," Winkelmann said. "We don't have any information about why he brought the plane down so quickly to a lower height."

At a subsequent news conference in Barcelona's El Prat airport, Heike Birlenbach, a Lufthansa vice president, said, "For the time being, we say it's an accident. There's nothing more that we can say right now. Everything else would be speculation."

Eric Heraud, a spokesman for the French Civil Aviation Authority, said the plane did not send out a distress signal, according to The Associated Press. Earlier reports said it had. The AP quoted Heraud as saying a combination of loss of radio contact with control and the plane's descent "prompted the control service to declare a distress." Winkelmann said Germanwings could not confirm a distress signal had been sent.

Winkelmann said Flight 4U 9525 left Barcelona at 10:01 a.m. The aircraft was scheduled to land in Duesseldorf at 11:39 a.m., according to Flightaware.com.

He said the aircraft was delivered to Lufthansa in 1991 and had been operating for Germanwings, a low-cost Lufthansa subsidiary, since 2004. Its last routine check was Monday, he said, in Duesseldorf. Its last major inspection was in the summer of 2013, he said. Winkelmann said the captain who flew the plane was an experienced pilot who had flown for Lufthansa and Germanwings for 10 years.

The nationalities of the passengers has not been released, pending notification of kin, Germanwings said. But the Education Ministry in German North Rhine-Westphalia state said 16 high-schoolers and two teachers from a school in Haltern, Germany, were aboard the flight.

"This is the darkest day in the history of our town," Haltern Mayor Bodo Klimpel said.

"Mourners began streaming into Barcelona's airport just hours after the morning flight took off — but never landed. The Lufthansa subsidiary Germanwings has set up a Spanish language hotline for family and friends of those who were on the plane. The Spanish government says roughly a third of the 150 people on board had Spanish surnames.

"The Spanish king and queen issued their condolences from France. They were in Paris on a state visit, but cut short their trip, and rushed home to Spain."

Lauren says the route is popular with Germans who vacation on Spain's Mediterranean coast.

At a news conference, French Interior Minister Bernard Cazeneuve said a black box was located at the site of the crash, and would be used to investigate what caused the plane to go down.

The exact location of the crash is unclear, but the terrain where the plane went down is difficult to access, officials said, hampering search efforts. We do know the Airbus A320 crashed in a remote part of the Alpes-de-Haute-Provence region. Eric Ciotti, head of the regional council in southeast France, said the crash site was Meolans-Revels, near the popular ski resort of Pra Loup. But Airbus said the crash occurred in nearby Prads-Haute-Bleone.

Earlier, French President Francois Hollande said: "The conditions of the accident suggest there would be no survivors." On Twitter, he expressed his condolences to the victims' families. German Chancellor Angel Merkel was "shaken" at the news of the crash, her spokesman Steffen Seibert said. Spanish President Mariano Rajoy called the crash a "tragedy."

Alain Vidal, France's secretary of state for transportation, told Europe 1 that the plane crashed in an area that is inaccessible by road. He said helicopters flying overhead spotted the debris and some bodies. Local officials said rescue workers were airlifted to the site.

The A320 is one of the most popular planes in the world for short- and medium-haul flights. In a statement, Airbus said:

"The aircraft involved in the accident, registered under D-AIPX was MSN (Manufacturer Serial Number) 147 delivered to Lufthansa from the production line in 1991. The aircraft had accumulated approximately 58,300 flight hours in some 46,700 flights. It was powered by CFM 56-5A1 engines."

Le Monde says Tuesday's crash is the deadliest in French territory since 1981, when 180 people died in the crash of an Inex-Adria Aviopromet plane at Mount San Pietro. In July 2000, an Air France Concorde flying between Paris and New York crashed during takeoff near Paris, killing 113 people.