Accessibility links
U.S. Confirms It Is Supporting Saudi Military Operations In Yemen : The Two-Way The attacks, coordinated with 10 allies, began hours after rebels seized an airbase that was critical to U.S. drone operations against al-Qaida. The base is just 35 miles from Aden, an economic hub.

"In support of [Gulf Cooperation Council] actions to defend against Houthi violence, President Obama has authorized the provision of logistical and intelligence support to GCC-led military operations. While U.S. forces are not taking direct military action in Yemen in support of this effort, we are establishing a Joint Planning Cell with Saudi Arabia to coordinate U.S. military and intelligence support."

Saudi Arabia, in coordination with a coalition of 10 allies, has started a bombing campaign in Yemen.

The airstrikes came hours after unconfirmed reports emerged that Yemen's President Abed Raboo Mansour Hadi had fled the country, as Houthi rebels closed in on Aden, the country's second largest city. The rebels had also just seized an airbase, just 35 miles from Aden, that was critical to U.S. drone operations against al-Qaida. 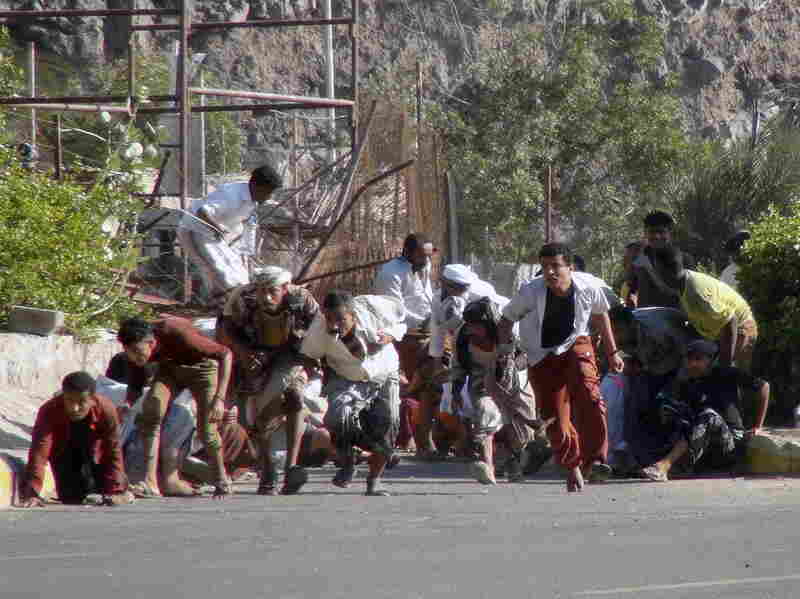 People seek shelter amid gunfire at an army base in Yemen's southern port city of Aden on Wednesday. Reuters /Landov hide caption 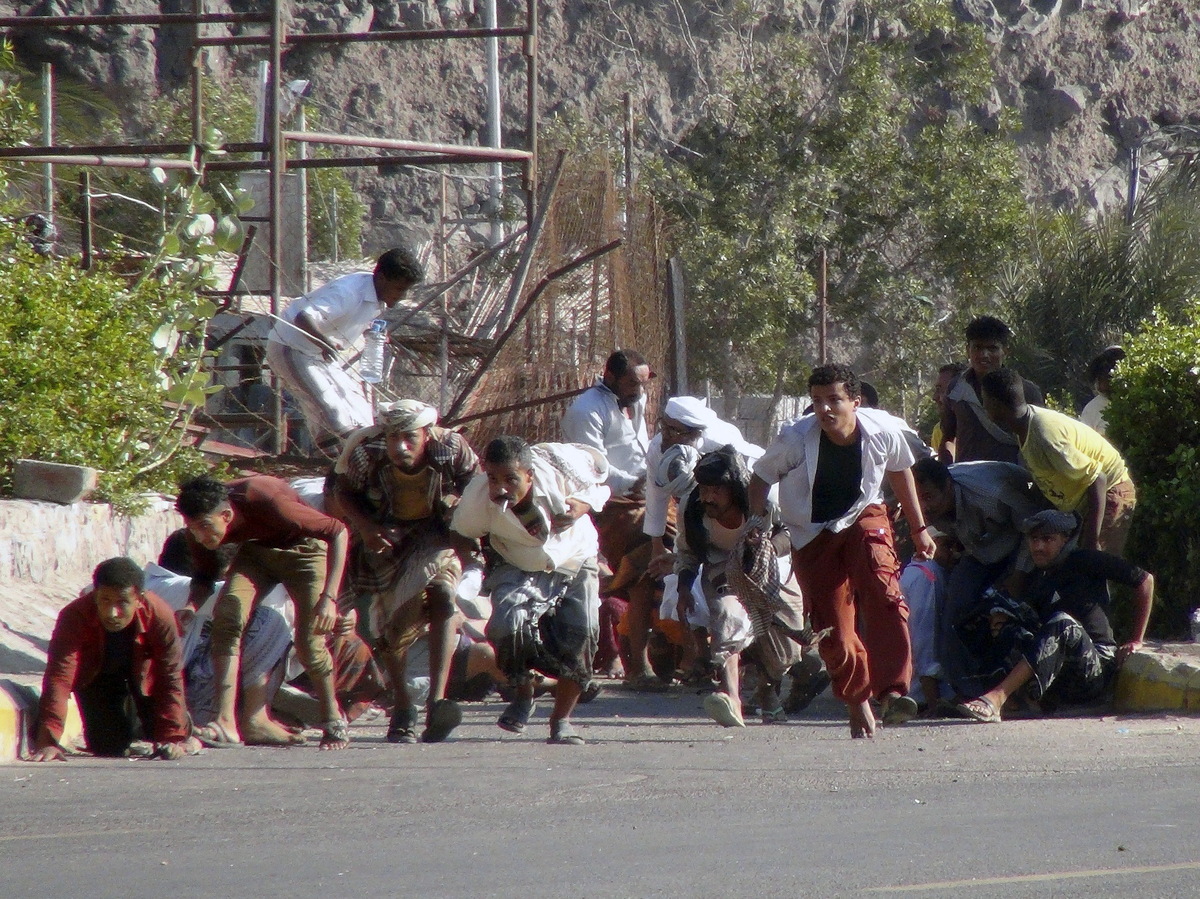 People seek shelter amid gunfire at an army base in Yemen's southern port city of Aden on Wednesday.

"Yemen shares a long border with Saudi Arabia, a major American ally, and the Saudis were reported massing forces on the Yemen frontier as President Mansour's last redoubt in Aden looked increasingly imperiled.

"Along with Syria, Iraq and Libya, Yemen is now the fourth state to veer toward political disintegration in the aftermath of the Arab Spring revolts that first erupted four years ago."

Quoting an unnamed U.S. official, Reuters reports that the United States is supporting the Saudi military in the operation. The official did not elaborate on what that support was but, Reuters reports, "Saudi Arabia's envoy to Washington told reporters the United States was not participating in the military operation itself, which includes air strikes against Houthi fighters."

Yemen's President Abed Rabbo Mansour Hadi has fled his palace in Aden, after Houthi rebels appeared to be closing in on the southern port city. It's not clear if the embattled president has left the city or the country.

U.S. State Department spokesperson, Jen Psaki, says the administration was in touch with Hadi earlier today. She confirmed that he is no longer at his Aden residence, but cannot confirm any additional details about his location.

Earlier, The Associated Press, which cited Yemeni security and port officials, said Hadi had left the country by boat, however those reports could not be confirmed. The news service says Houthi rebels captured the city's airport, and that Aden, the country's economic hub, could soon fall.

The Shiite rebels captured the capital city, Sanaa, in September and have swiftly advanced toward Aden, where Hadi encamped after being pushed from power.

Rebels also reportedly were battling pro-government security forces guarding the president's palace in Aden, and seized an airbase that was critical to U.S. drone operations against al-Qaida.

On Tuesday, Hadi appealed to the U.N. Security Council to authorize a military intervention to prevent Yemen from "sliding into more chaos and destruction," according to The Guardian.

Reuters reports that Saudi Arabia is moving heavy military equipment, including artillery, to its border with Yemen. Saudi Arabia says the buildup at the border is purely defensive.

Gregory Johnsen, a Yemen expert with Buzzfeed, tells NPR's Michele Kelemen that Saudi Arabia is saber rattling, and that it would be a huge miscalculation if it sends troops into Yemen.

Johnsen, the author of The Last Refuge: Yemen, al-Qaeda, and America's War in Arabia, says the increasing chaos in Yemen could spill over into the region, especially between Sunni Saudi Arabia and Shi'ite Iran, which Johnsen says is providing aid Houthi rebels.

"What we're seeing are regional rivalries, particularly between Saudi Arabia and Iran, are being grafted on to this local domestic conflict." Johnsen says that when you put all the different elements together, it's a "witch's brew."

The ongoing volatile political and security situation has forced the U.S. to pull all its remaining personnel — civilian, military and intelligence — out of the country. The move could have an impact on U.S counter-terrorism efforts against al-Qaida in the Arabian Peninsula, considered one of the most dangerous offshoots of the terror group.

There are growing concerns the deteriorating situation could create a power vacuum in Yemen. Nabeel Khoury, with Northwestern University, tells NPR that the chaos and a looming civil war will produce more terrorism by groups such as the self-proclaimed Islamic State, also known as ISIS.

"We've seen now that ISIS has established a small foothold in Yemen, this will likely grow, a lack of political stability means extremism thrives," says Khoury, who was deputy chief of mission at the U.S. embassy in Yemen a decade ago.