Accessibility links
Saudis Say Iranian Advisers Aiding Houthis In Yemen As Strikes Continue : The Two-Way The Saudi ambassador to Washington also says the air operations against the Shiite Houthi rebels will continue and "we will see coalition partners join in the effort." 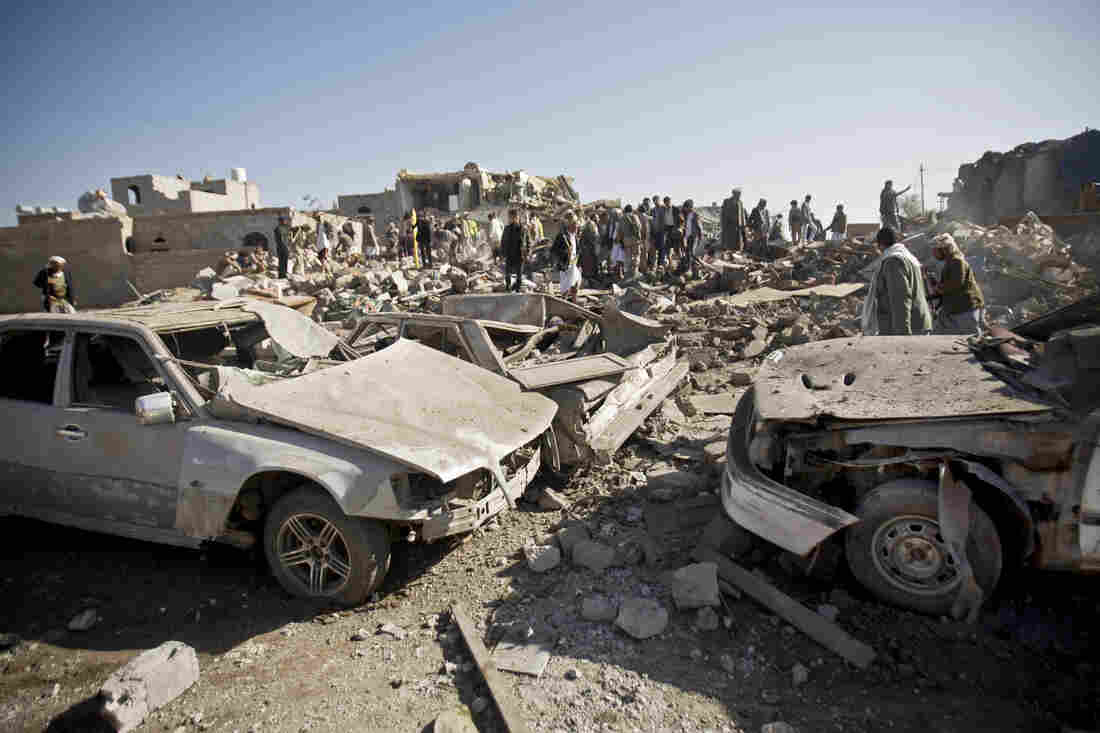 People search for survivors under the rubble of houses destroyed by Saudi airstrikes near Sanaa Airport, Yemen, on Thursday. Hani Mohammed/AP hide caption 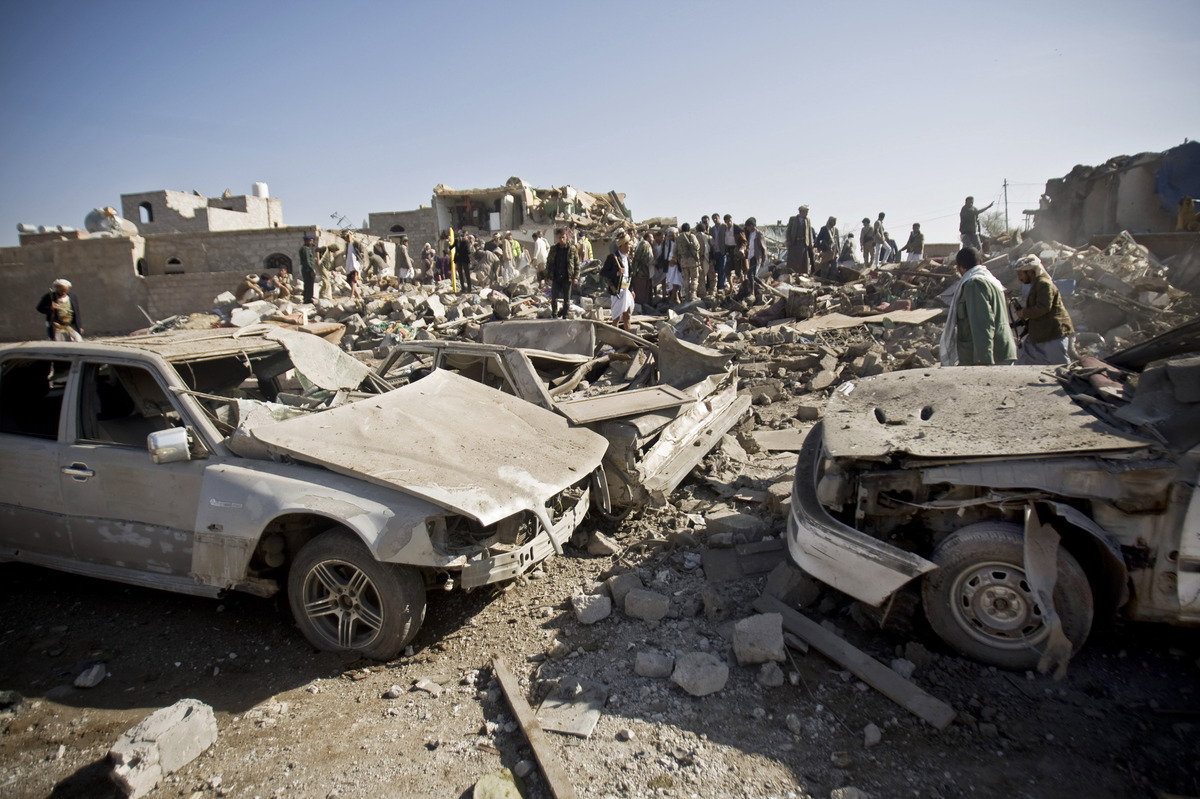 People search for survivors under the rubble of houses destroyed by Saudi airstrikes near Sanaa Airport, Yemen, on Thursday.

The Saudi ambassador to Washington says the Saudi air operations against Shiite Houthi rebels in Yemen will continue and "we will see coalition partners join in the effort" and he accused Iran of sending advisers to aid the Houthis.

Saudi warplanes pounded Houthi rebels overnight in an effort to stop their advance on southern Yemen. The Saudis and nine other allies launched airstrikes Wednesday after the Shiite militants captured airstrips around the southern port city of Aden, and fired on the residence of President Abd Rabbuh Mansur Hadi.

The embattled president fled the palace ahead of the rebel advance and is now in Saudi Arabia, Adel al-Jubeir, the Saudi ambassador to Washington, told reporters. He said Hadi would likely attend a regional meeting in Egypt this weekend.

The U.S. said late Wednesday that it is providing logistical and intelligence support to the military effort by Yemen's allies.

Shiite Iran, which backs the Houthis, called the operation the operation "dangerous" and likened it to an invasion. NPR's Deborah Amos reports that Iran complained that the air campaign against the rebels was a U.S.-backed operation.

The Guardian reports that the Al-Arabiya news channel said Saudi Arabia had lined up 150,000 soldiers in preparation for a ground offensive. Egypt has said it will help. Jubeir said the Saudis were talking to a "couple of countries that are interested in participating, and we're still talking to them about what type of participation." Various news reports say Pakistan is prepared to commit troops.

The Saudi-led airstrikes have raised the possibility of ground troops entering the country to fight the Houthis. But Jubeir said that was unlikely for now.

"This is just the beginning of the operation," he said. "The hope is that we degrade and destroy their military capabilities. The hope is that wisdom will prevail and that they will join the political process; That they will give up the heavy weapons and withdraw from the areas they occupy."

Jubeir said the Houthis possessed an air force, heavy weapons and ballistic missiles, adding they "have staged a coup." And, he said, Iran was also to blame.

"It's the Iranians who interfered in Yemen," he said, adding: "There are Iranian advisers advising [the Houthis] and Hezbollah operatives advising them."

He said Saudi Arabia's end game with its military strikes was "to remove the threat to Yemen — and the threat to Saudi Arabia. If it can be done politically, that's fine. If it has to be done militarily, then so be it."

The increasing chaos in Yemen could set up a new front between the Middle East's Sunni powers and Shi'ite Iran. The New York Times reports that the Saudi Arabian intervention in Yemen immediately raised the threat that Iran might retaliate by increasing its own support for the Houthis with weapons and money.

Yemen has been spiraling into chaos since February when the Houthis took control of Sanaa, dissolved Parliament and seized power. The Houthis want greater autonomy for the north of Yemen.

Its members are anti-U.S., but are also battling al-Qaida in the Arabian Peninsula. They are also likely to take on the self-described Islamic State. Both AQAP and ISIS are Sunni and regard Shiites as heretics.

As NPR reported Wednesday: "The ongoing volatile political and security situation has forced the U.S. to pull all its remaining personnel — civilian, military and intelligence — out of the country. The move could have an impact on U.S counter-terrorism efforts against al-Qaida in the Arabian Peninsula, considered one of the most dangerous offshoots of the terror group."

The escalating tensions in the Middle East have sparked a modest rise in oil prices,according to Reuters news agency. Yemen has a coastline on the Bab el-Mandeb Strait, which connects the Red Sea with the Gulf of Aden and the Arabian Sea. The news agency says on average almost 4 million barrels of oil pass through the Strait every day.