Accessibility links
Michigan State, Duke Join Kentucky, Wisconsin In The Men's Final Four : The Two-Way A missed free throw sent Michigan State-Louisville to overtime, where the Cardinals couldn't hang on. Gonzaga hung with Duke but couldn't quite keep up. 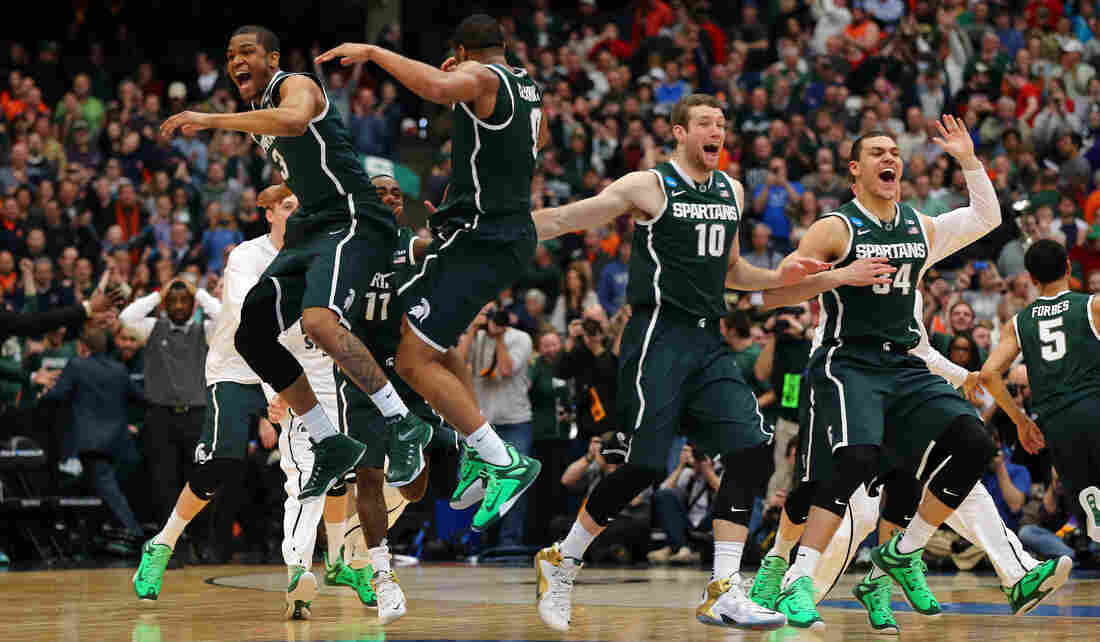 We've got a Final Four.

Michigan State and Duke will join Kentucky and Wisconsin in Indianapolis next Saturday night.

In Syracuse, N.Y., Michigan State and Louisville traded leads all game. As the clock wound down, the Spartans led by one point, 65-64. But they missed their chance to extend the lead when freshman Marvin Clark Jr. missed two free throws with 22 seconds to go.

But just seconds later, they fouled Louisville forward Mangok Mathiang, who made one free throw to tie the game, but couldn't hit the second.

Overtime wasn't as close. The Spartans won 76-70, while legendary point guard Magic Johnson (who led the Spartans to the title in 1979) smiled on from the stands. This is the Spartans' sixth trip to the Final Four since 2000.

Duke's star freshman Jahlil Okafor, the presumed #1 pick in this summer's NBA draft, was looking to rebound from a tough showing against Utah, where he scored just six points. Tonight, he only scored nine, but his teammates again picked up the slack. Duke held an arm's-length lead for most of the game and won 66-52.

Once the quintessential Cinderella team, but now a regular tournament heavyweight, Gonzaga has actually never been to a Final Four. Duke, on the other hand, is headed to their 16th.

Kentucky and Wisconsin sealed their spots last night — Kentucky in a total thriller over Notre Dame, who held a small lead for most of the game before losing control right at the end.