Accessibility links
Sen. Robert Menendez Indicted On Corruption Charges : The Two-Way The indictment alleges that Menendez abused his office to benefit a friend and donor. The New Jersey senator has always maintained his innocence. 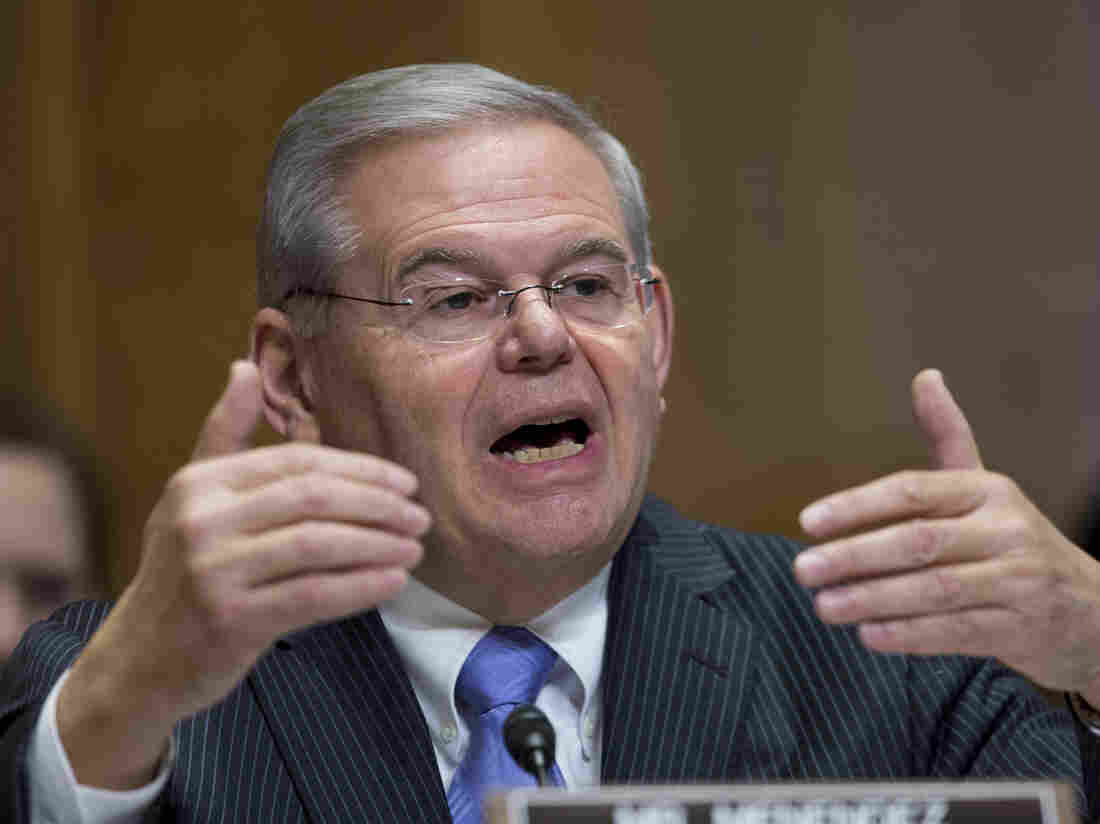 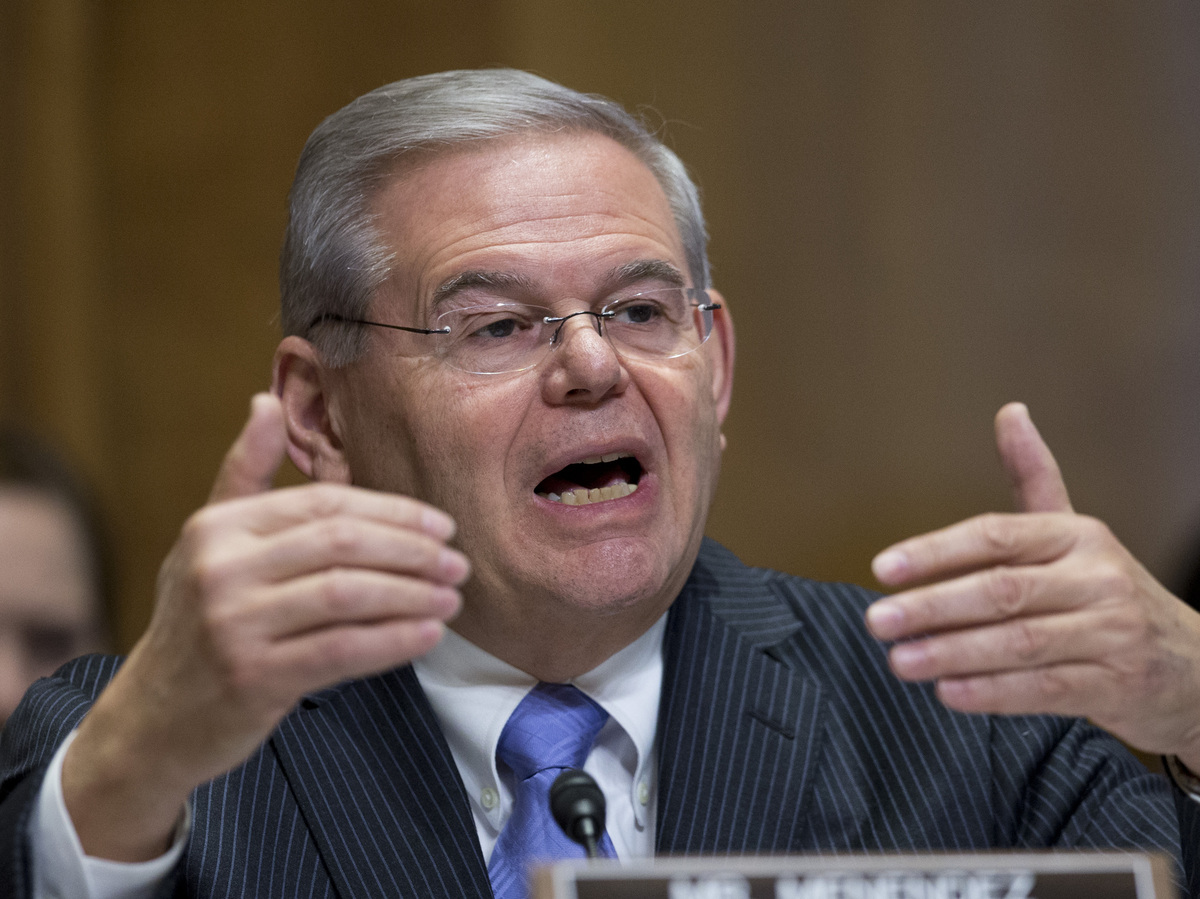 The indictment alleges that Menendez abused his office to benefit Salomon Melgen, a Florida eye doctor who was the senator's friend and donor. Menendez has always maintained his innocence.

During a press conference in Newark, New Jersey, Menendez said he was "confident that at the end of the day, I will be vindicated."

Menendez said he was "outraged" at the allegations and that Justice Department lawyers were swayed by false allegations coming from "those who have political motive to silence me."

"But I will not be silenced," Menendez said. "I am angry because prosecutors at the Justice Department don't know the difference between friendship and corruption."

The charges against Menendez are sure to kick off a tough legal battle that puts Menendez' future political career in question. While he insisted he would continue to fight, Menendez also announced he was temporarily stepping down as ranking member of the Senate Foreign Relations Committee.

"While there is no caucus rule that dictates that I do so, I believe it is in the best interests of the Committee, my colleagues, and the Senate which is why I have chosen to do so," Menendez wrote in a letter to Senate Democratic Leader Harry Reid.

A Justice Department spokesperson told NPR's Carrie Johnson that a federal grand jury handed down a 14-count indictment against Menendez and Melgen, including "one count of conspiracy, one count of violating the travel act, eight counts of bribery and three counts of honest services fraud."

The indictment alleges that the defendants conspired to use Menendez's office to "benefit and enrich themselves through bribery."

The indictment alleges that Melgen offered and Menendez solicited and accepted "things of value, including domestic and international flights on private jets, first-class domestic airfare, use of a Caribbean villa, access to an exclusive Dominican resort, a stay at a luxury hotel in Paris, expensive meals, golf outings, and tens of thousands of dollars in contributions to a legal defense fund." In return for campaign contributions, the indictment alleges, Menendez performed "specific requested exercises" of his "official authority."

The Wall Street Journal reports that these are the first criminal charges brought against a sitting senator since "the botched prosecution of Alaska's Ted Stevens seven years ago."

"Dr. Melgen is already under investigation for possibly overbilling Medicare. The FBI has also probed whether Mr. Menendez used his position to try to help Dr. Melgen with his legal troubles and whether the senator sought to improperly aid Dr. Melgen's business interests in a Dominican Republic port security company. Dr. Melgen's lawyer has previously said the doctor acted appropriately at all times."

We're still sifting through the indictment, but here's a rundown of the allegations, according to a press release from the Justice Department:

"According to allegations in the indictment, between January 2006 and January 2013, Menendez accepted close to $1 million worth of lavish gifts and campaign contributions from Melgen in exchange for using the power of his Senate office to influence the outcome of ongoing contractual and Medicare billing disputes worth tens of millions of dollars to Melgen and to support the visa applications of several of Melgen's girlfriends.

"Specifically, the indictment alleges that, among other gifts, Menendez accepted flights on Melgen's private jet, a first-class commercial flight and a flight on a chartered jet; numerous vacations at Melgen's Caribbean villa in the Dominican Republic and at a hotel room in Paris; and $40,000 in contributions to his legal defense fund and over $750,000 in campaign contributions. Menendez never disclosed any of the reportable gifts that he received from Melgen on his financial disclosure forms.

"According to allegations in the indictment, during this same time period, Menendez allegedly engaged in three efforts to use his Senate office and staff to advocate on behalf of Melgen's personal and financial interests. First, Menendez allegedly pressured executive agencies in connection with a conflict between Melgen and the government of the Dominican Republic relating to a disputed contract that Melgen purchased to provide exclusive screening of containers coming through Dominican ports. Second, Menendez allegedly advocated on behalf of Melgen in connection with a Medicare billing dispute worth approximately $8.9 million to Melgen. Third, Menendez allegedly took active steps to support the tourist and student visa applications of three of Melgen's girlfriends, as well as the visa application of the younger sister of one of Melgen's girlfriends. Throughout these efforts, Menendez allegedly engaged in advocacy for Melgen all the way up to the highest levels of the U.S. government, including meeting with a U.S. cabinet secretary, contacting a U.S. Ambassador, meeting with the heads of executive agencies and other senior executive officials and soliciting other U.S. Senators, all in order to assist Melgen's personal and pecuniary interests."