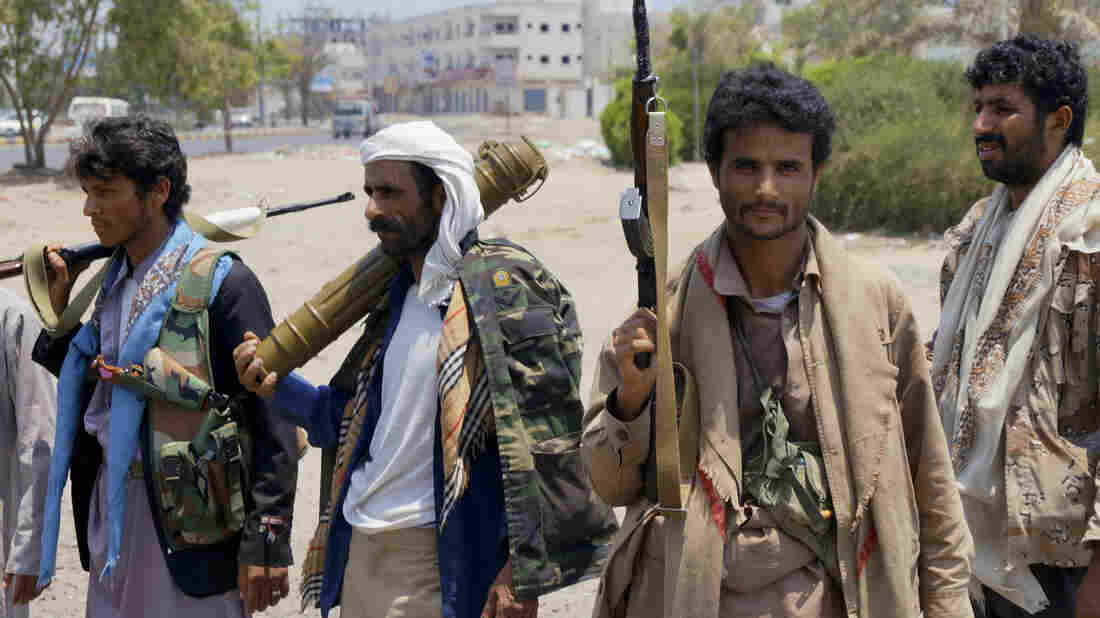 Houthi fighters gather in the Yemeni city of Aden on Thursday. The Shiite rebels and their allies seized the presidential palace in this southern coastal city. Wael Qubady/AP hide caption 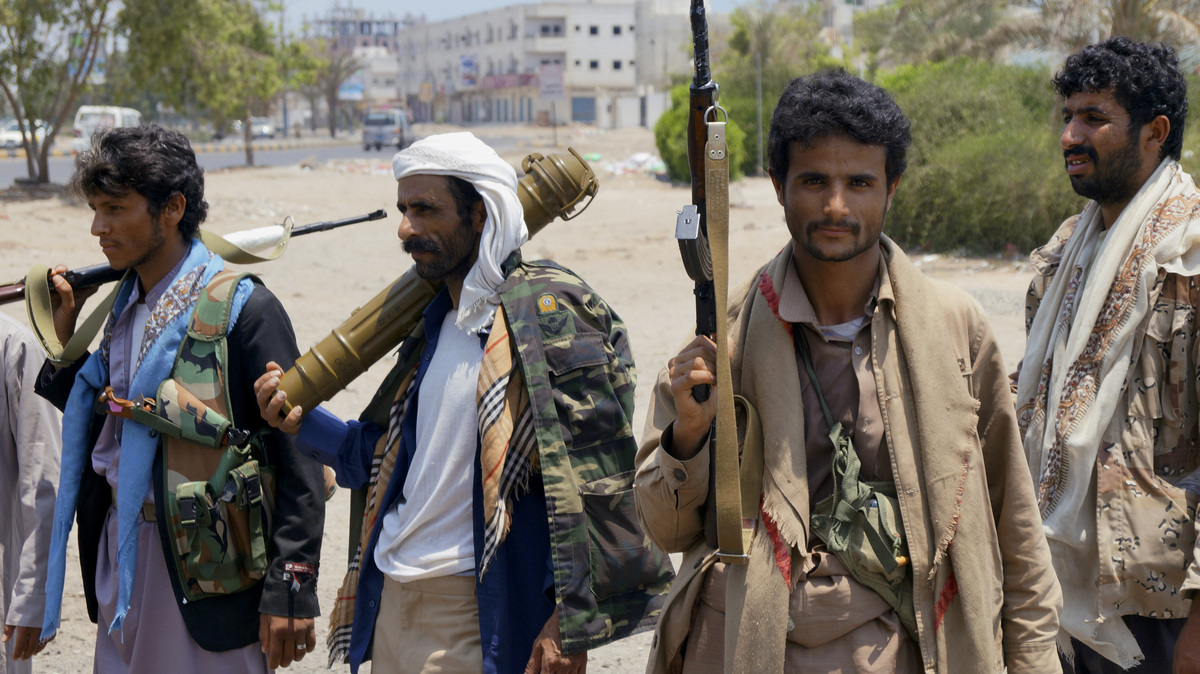 Houthi fighters gather in the Yemeni city of Aden on Thursday. The Shiite rebels and their allies seized the presidential palace in this southern coastal city.

Yemen's Houthi fighters and their allies seized a central area of Aden, capturing the presidential palace on a hilltop of the southern port city. The Shiite rebels took the area despite an eight-day air campaign by a Saudi-led coalition to stem the Houthis' advance.

From Cairo, NPR's Leila Fadel reports, "Aircraft are flying above the presidential palace ... and another area of the city. Most of the city is controlled by the Houthis now, including the airport."

The rebels, she says, made a huge push for Aden on Wednesday and rolled into the center with their military allies in tanks. "There is still street fighting," Leila says.

As fighting between the two sides continued, al-Qaida laid siege to the coastal city of al-Mukallah, asserting control over key facilities there. Militants freed about 300 inmates from a local prison, looted the building and killed two prison guards, according to The Associated Press.

Al-Qaida has a large presence inside Yemen. Leila reports that analysts worry that as the Houthis fight for territory and as the Saudi-led air campaign strikes Houthi and military targets inside Yemen, no one is battling al-Qaida's presence or power.

"Analysts say with Yemen in complete chaos, extremist groups like al-Qaida and the self-declared Islamic State will thrive," she says.

Fighting rages in about half of Yemen's provinces, The Wall Street Journal reports. Airstrikes hit seaports in six cities and targeted four of the country's airports, including the capital, Sanaa. Homes, businesses and vital economic infrastructure have been destroyed. The violence is forcing people to flee with their belongings, fearing more airstrikes.

The newspaper says the airstrikes are turning many Yemenis against the Saudi-led campaign. Citizens who were once for the air campaign as a way to stop the Houthi rebel advance are now turning against the operation.

The United Nations said Wednesday that at least 90 people have been killed by airstrikes, including at least 39 people who died after an airstrike on a dairy in Hodeida, a city far from rebel-controlled territory.

A New York Times op-ed says the Saudi-led military intervention in Yemen threatens to turn what has been a civil war between Shiite Houthis and Sunni-led government into a wider regional struggle involving Iran. The editorial says the air campaign could also destroy any hope of stability in Yemen.

Saudi Arabia's military incursion in Yemen is about ushering in the kingdom's new foreign policy by reducing its expectations of the U.S. and relying on its own military to steady the Middle East, says Ray Takeyh, a senior fellow at the Council on Foreign Relations.